Travelling to Japan during 2020’s big sporting event? Here’s everything you need to know. 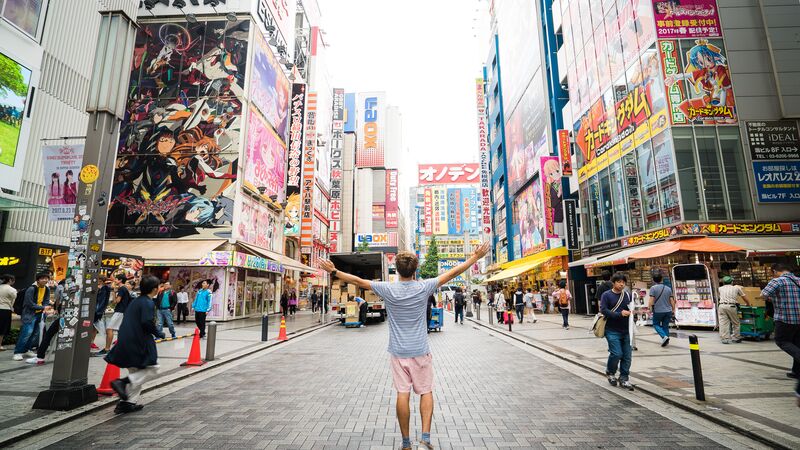 The countdown is on. In July 2020, hundreds of thousands of sports-lovers from around the globe will descend on Japan for one of the biggest sporting events on earth.

If you’re thinking of going, here’s everything you need to know about travelling to Japan during July and August. 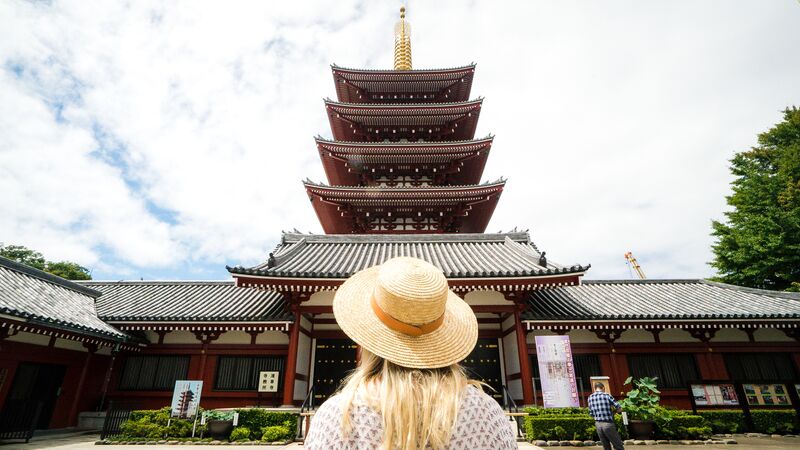 When you think of weather in Japan, steamy doesn’t usually spring to mind. But summer temperatures in Japan, particularly in cities like Tokyo, Kyoto and Osaka, can get incredibly hot. Make sure you pack appropriate summer clothing (and be prepared for sporadic soaking downpours too), drink plenty of water, and seek out some shade – or air-conditioning – if you need a break from sports-watching or sightseeing.

EXPLORE OUR FULL RANGE OF ADVENTURES IN JAPAN HERE

How should I get around Tokyo?

While Tokyo’s train network can seem confusing at first, it’s an easy way to get around; after all, it’s one of the most efficient rail networks on the planet. Download an app (like Hyperdia or Google Maps) to figure out how to get from A to B, without going the long way, or zipping past your stop because you accidentally got on a rapid train.

You can buy tickets for individual journeys at the station, but it’s easier to grab yourself a Pasmo or Suica card, load it up with some yen, and just touch on/touch off through the subways. If you’re planning on travelling around Japan on the JR network, it’s worth purchasing a JR Pass before you travel (you can’t get them after you arrive in Japan).

FIND OUR MORE ABOUT WHETHER YOU NEED A RAIL PASS HERE

It’s expected that trains during July and August will be very crowded – an estimated 3.64 million train travellers pass through Shinjuku Station on an average day – so it’s important to be patient, follow the rules, and consider walking (if it’s an option). Tokyo is a beautiful to see by foot – and it’s free! 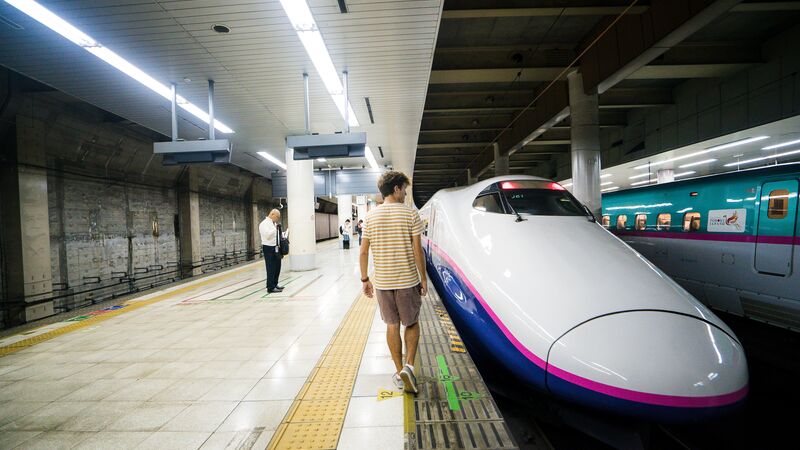 Japan’s first bullet train was unveiled during the 1964 Big Sporting Event, so it’s not surprising that two new trains will run the rails in 2020. The Shinkansen N700S, AKA the Shinkansen Supreme, is tipped to be quieter and more comfortable than earlier models and will zoom between Tokyo Station and Shin-Osaka Station. Meanwhile, the brand-new Maglev will make its debut. Capable of reaching speeds over 600 kilometres per hour, the trains actually hover just above the tracks using magnetic levitation technology. The trains won’t be officially released until 2027, but visitors will have the chance to travel on one during the 2020 summer.

RELATED: WHY TRAIN TRAVEL IS JAPAN IS AN UNMISSABLE EXPERIENCE

Taxis, including a fleet of driverless cabs, are another option, but traffic is likely to be very busy, particularly with road closures around the main stadiums.

What sort of accommodation should I stay in? 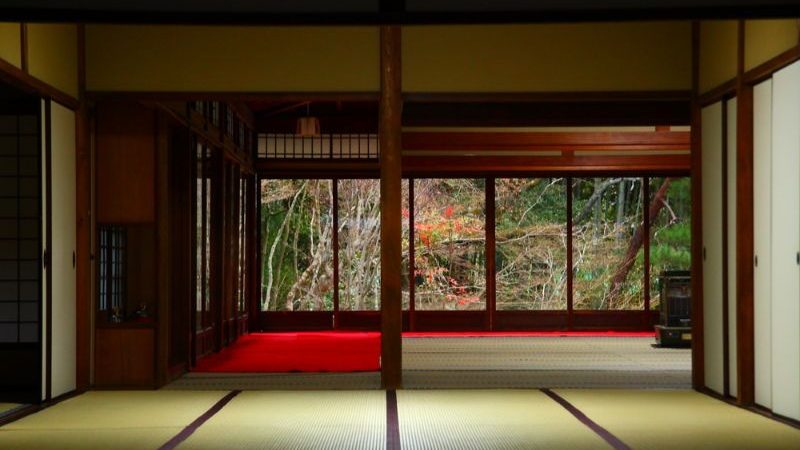 If you haven’t booked your accommodation yet, hop to it. Hotel rooms in Tokyo are almost all gone, and rooms that are available are getting very pricey. There’s talk of cruise ships docking in Yokohama Bay to accommodate the thousands of sports fans in ‘floating hotels’. If you can’t secure accommodation in a hotel – either on land or sea – look into staying in a ryokan (a traditional Japanese inn), guesthouse, capsule/pod hotel (keep in mind that many of these miniature hotels have upped their prices considerably), hostel, or AirBnb, or try your luck booking a room outside Tokyo. Yokohama is 15 minutes away on the bullet train (around 50 minutes on the local train) and has lots of hotels; Chiba and Kawasaki are also convenient options.

What Tokyo neighbourhood should I stay in? 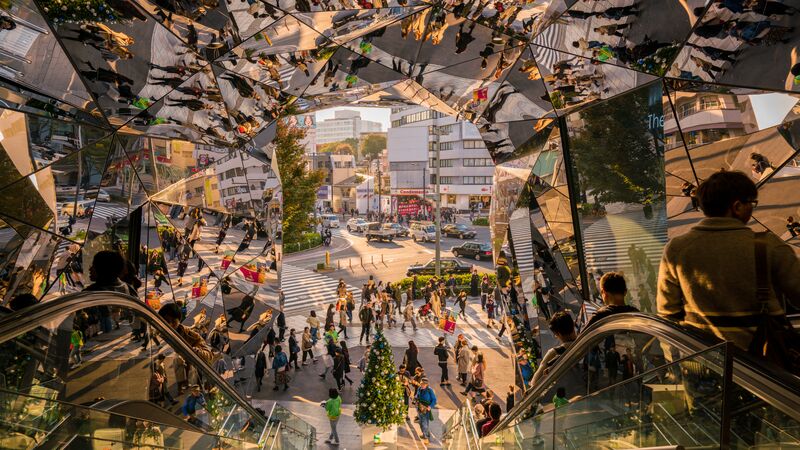 Tokyo is big. Really big. With a population of over 37 million people, it’s the most densely populated city in the world, and stretches over 2100 square kilometres across Honshu (Japan’s main island). It’s important to do some research to make sure you’re staying in a convenient part of the city so you’re not spending hours on public transport. Here are a few of the best neighbourhoods to stay in.

Around Tokyo Station
Want to stay in the most central part of Tokyo? Try your luck getting a room near Tokyo Station. It’s the city’s main transport hub, servicing eight train lines, seven shinkansens, and one metro line (over 3000 trains a day pull into the station), and there are a stack of great hotels, restaurants and department stores literally at its doorstep.

Shibuya and Shinjuku
If you want to be in the middle of the action, Shibuya and Shinjuku are the places to be. With neon lights, a giant Godzilla head poking out from behind a building, the busiest road crossing in the world (they don’t call it the Shibuya Scramble for nothing) and narrow laneways packed with smoky bars, these two districts are quintessentially Tokyo. 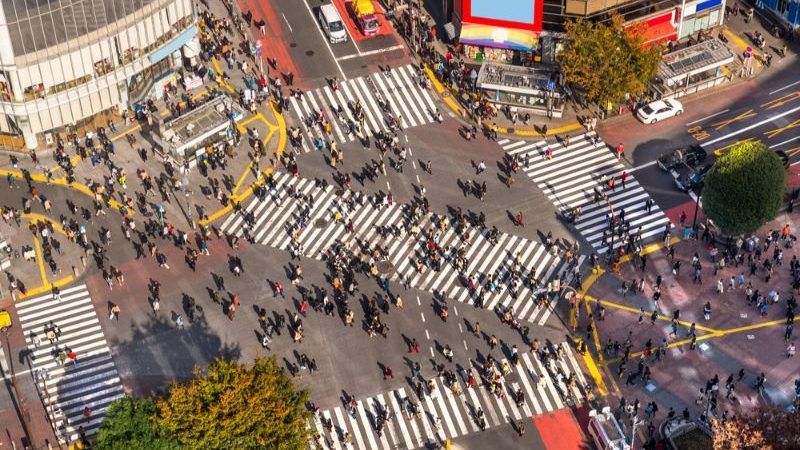 Roppongi
Once a popular entertainment district for American GIs to let loose during the post-war occupation, it’s taken a while for Roppongi to shake off its sleazy reputation. Along with a range of galleries and museums, including the largest art museum in Japan, Roppongi is also packed with restaurants, bars and clubs.

Ginza
Now one of the most upmarket areas in Tokyo, Ginza has come a long way from its muddy beginnings, built on swamplands in the 16th century. The main street – Chuo Dori – is closed to traffic every weekend, making it a great time to window-shop in high-end boutiques, explore multi-level department stores and get your art on in one of the many art galleries. Expect accommodation here to be pricey (if it’s not already fully booked).

What should I eat in Tokyo? 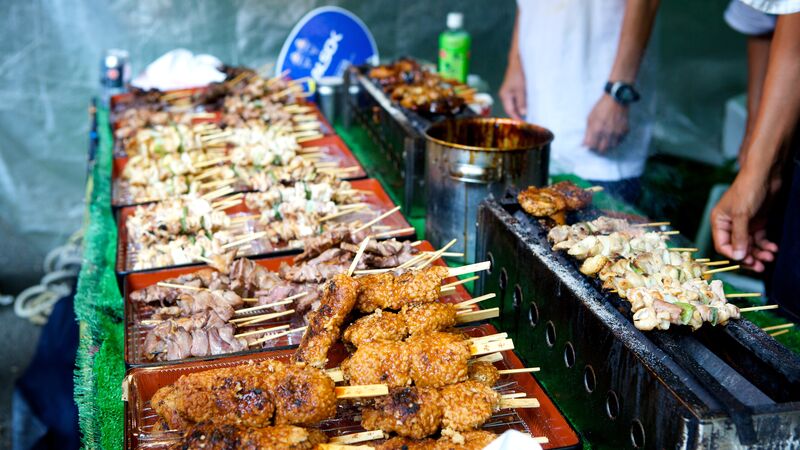 In a word: everything. But here are the essentials.

Sushi and sashimi
Japan’s most iconic dishes consists of thinly sliced raw fish/seafood (sashimi), and a piece of fish (raw or grilled), meat, vegetable or egg sitting atop a bite-sized oval of sticky seasoned rice (sushi). Both are best enjoyed with a little soy sauce, wasabi, and a cold beer.

Ramen
Wheat noodles served floating in a flavoursome broth, with a variety of toppings: bamboo shoots, spring onions, nori, and egg. Most ramen is made with a pork broth and served with slices of pork, but miso-based vegetarian soups are pretty easy to find (and are just as delicious). Loud slurping is encouraged!

LOVE TO EAT? JOIN US ON OUR 12-DAY REAL FOOD ADVENTURE AROUND JAPAN NOW!

Okonomiyaki
This chunky pancake is an essential addition to your eating-in-Japan repertoire. Usually cooked by customers on a grill in-laid in the table, okonomiyaki is made using egg and flour, with hungry diners adding in the rest: meat, seafood, and vegetables, then topped with lashings of kewpie mayo, okonomiyaki sauce and bonito flakes. Okonomi-YUMMY, more like it.

Yakitori
Literally chicken on a stick. Meat is skewered and grilled over hot coals, then brushed with a sticky soy sauce. It’s common to find yakitori made with a variety of meats, as well as seafood and vegetables.

Tonkatsu
Pork fillets, battered and crumbed, and deep-fried in oil. Tonkatsu is usually served alongside a salad of mayo-dressed cabbage.

Onigiri
Need a quick bite on the run*? Pick up an onigiri or two from a combini (convenience store). The sticky boiled rice balls (or triangles) are usually filled with fish, roe or dried plum, and are wrapped into a tidy little package inside a sheet of dried seaweed.

*Don’t actually eat these while you’re running. It’s considered rude to eat while you’re walking in Japan, so make sure you find somewhere to sit, like a park bench, enjoy your snack, and then continue on your way.

RELATED: HOW TO EAT AND DRINK LIKE A LOCAL IN JAPAN

A few other tips: 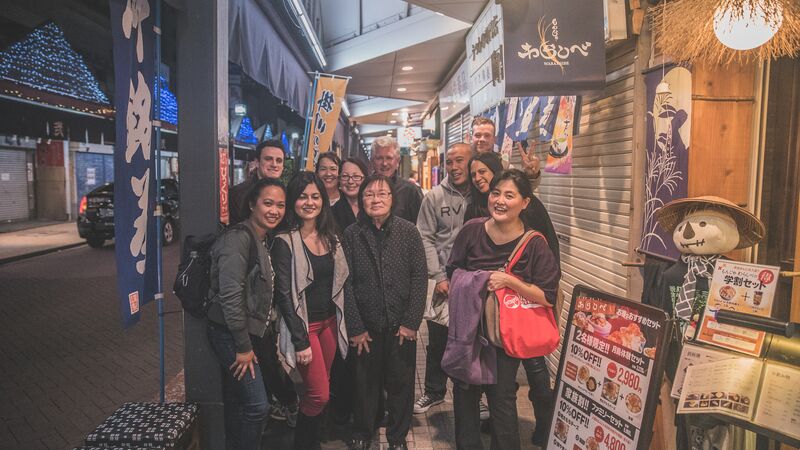 Carry cash
For a country that’s seemingly at the forefront of new technologies, Japan is still a predominately cash-based society. Many shops and restaurants have card facilities, but you’ll need to pay cash to top up your Pasmo and Suica cards, in taxis, and in many bars and cafes.

Wear your good socks
It’s customary to take your shoes off when you enter people’s homes, temples, some restaurants, and changing rooms (shoes lined up at the entrance will be a giveaway). Leave the socks with the holey toes at home.

RELATED: EVERYTHING YOU NEED TO KNOW ABOUT ETIQUETTE IN JAPAN

Sshh
Travelling on public transport? Go into stealth mode. Avoid loud conversations, keep your phone on silent, and cover your mouth with your hand if your BFF calls for updates.

Here’s a tip. Don’t tip.
Tipping isn’t a thing in Japan (and it’s seen as disrespectful if you leave extra cash with your bill). Say gochisosama-deshita – “thank you for the delicious meal” – instead.

Travelling to Japan during 2020’s big sporting event? Here’s everything you need to know. was last modified: December 11th, 2019 by Emily Kratzmann
AsiaJapanTokyo 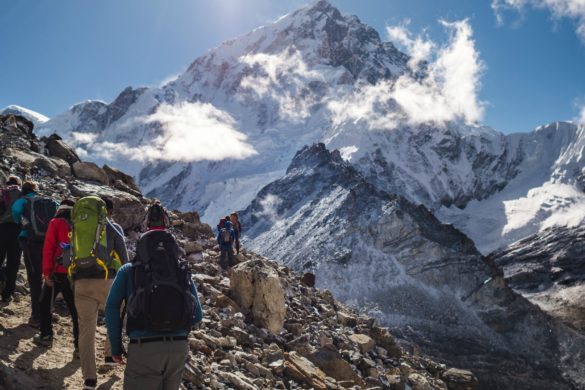 What I wish I knew before trekking Everest Base Camp 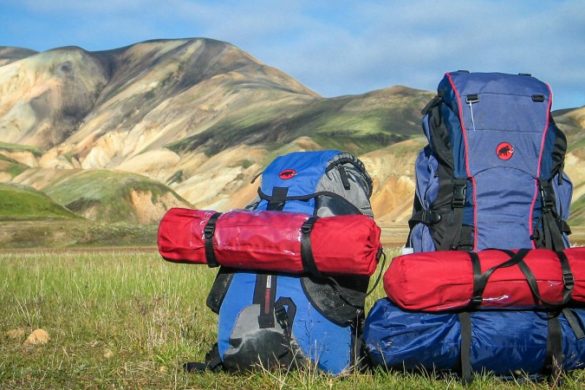 Packing the perfect rucksack for a family holiday 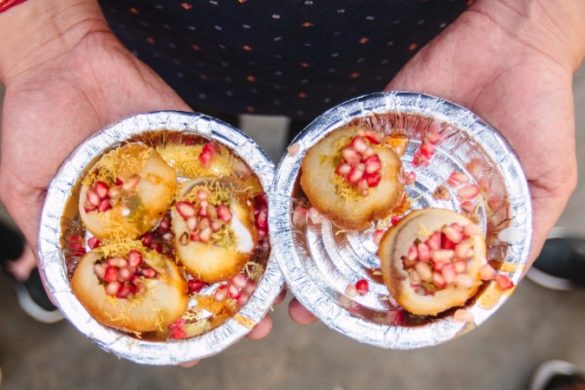 5 of our favourite foods from around the world 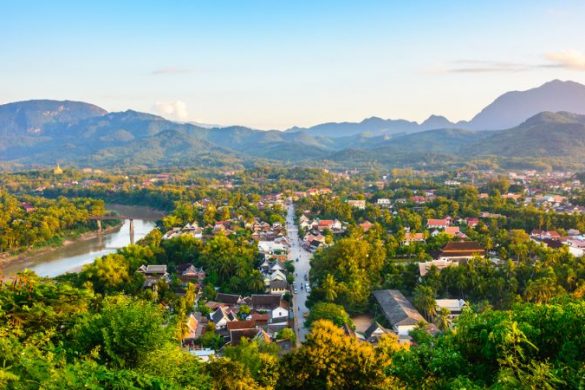 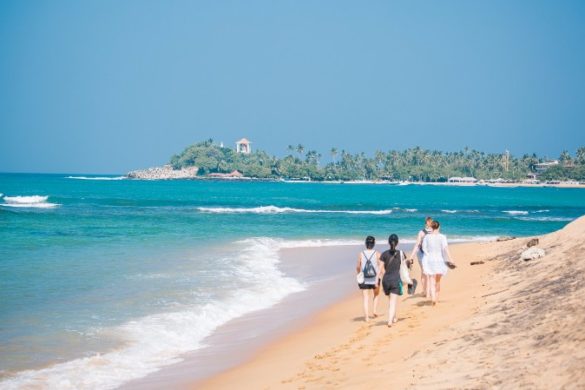 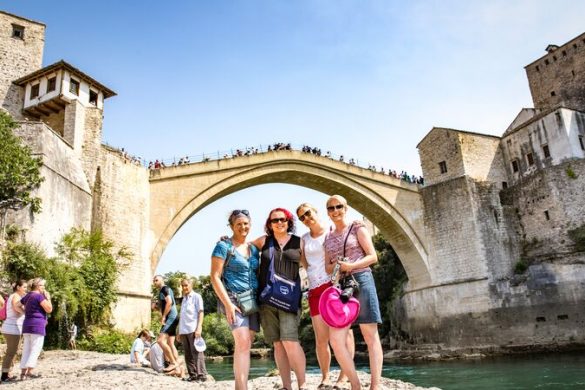 Bosnia & Herzegovina: 7 reasons to look beyond the headlines 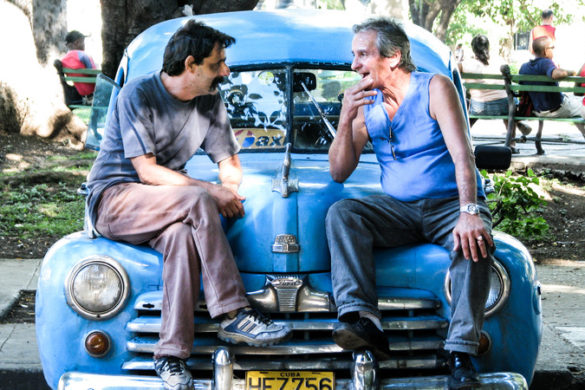 Havana have-tos: the experiences you can’t miss in Cuba’s capital 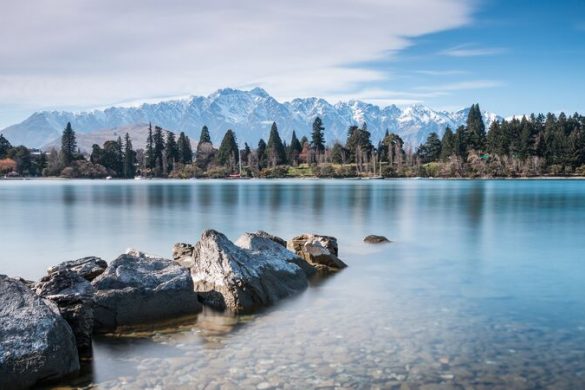 The top 5 destinations for travel in November 2020: New Zealand edition

Why you should visit Sucre, Bolivia’s most beautiful city

An etiquette guide to the Galapagos Islands