Straddling Africa and the Middle East, this once-overlooked Mediterranean gem is well and truly back on the map.

From the sun-drenched beaches of the north to the unforgiving desert of the south, and with desolate, lunar landscapes in between, Tunisia has quite the unique allure. And as the fog continues to lift after the jarring events of 2015, there’s never been a better time to experience it. It’s not often you can clock Roman ruins this grand, seaside living this perfect, and medieval towns this well preserved, in such quietude. Morocco may be what’s hot, but Tunisia is where to find that next-level slice of North Africa, with a fraction of the tourists.

Uncover Tunisia on this 12-day Expedition, travelling from the turquoise coast to vast... 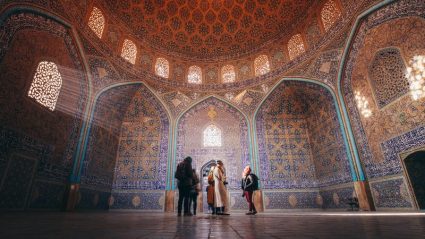 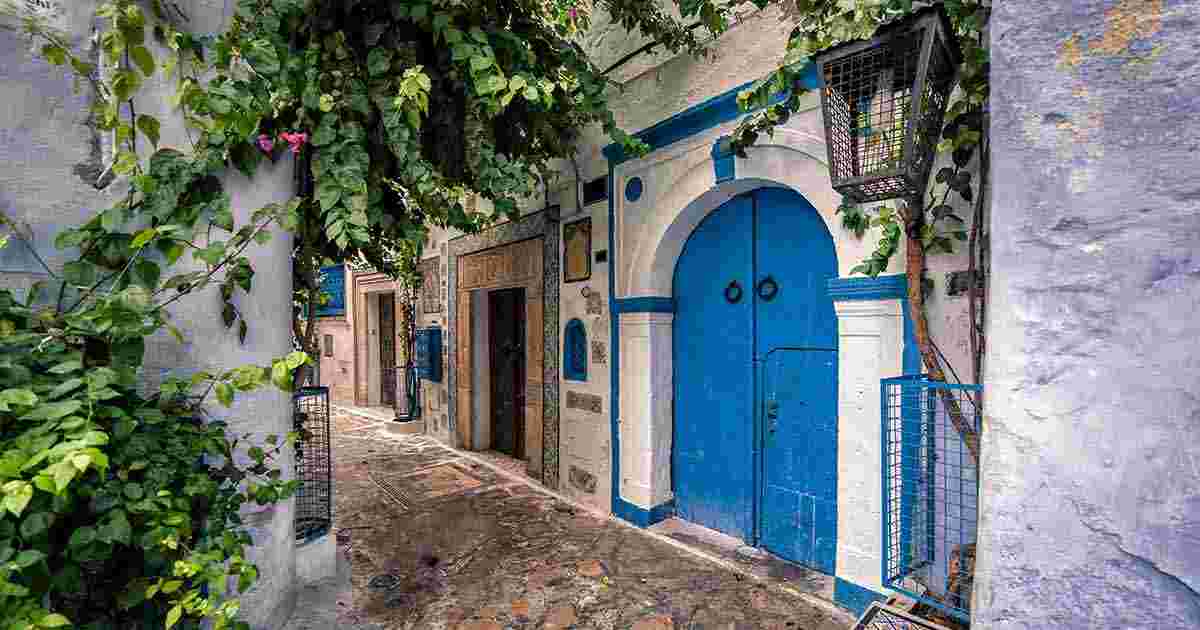 With the blue-and-white perfection of seaside Sidi Bou Said, and a medieval medina to rival anything in Morocco, Tunis is high on charm and low on crowds. 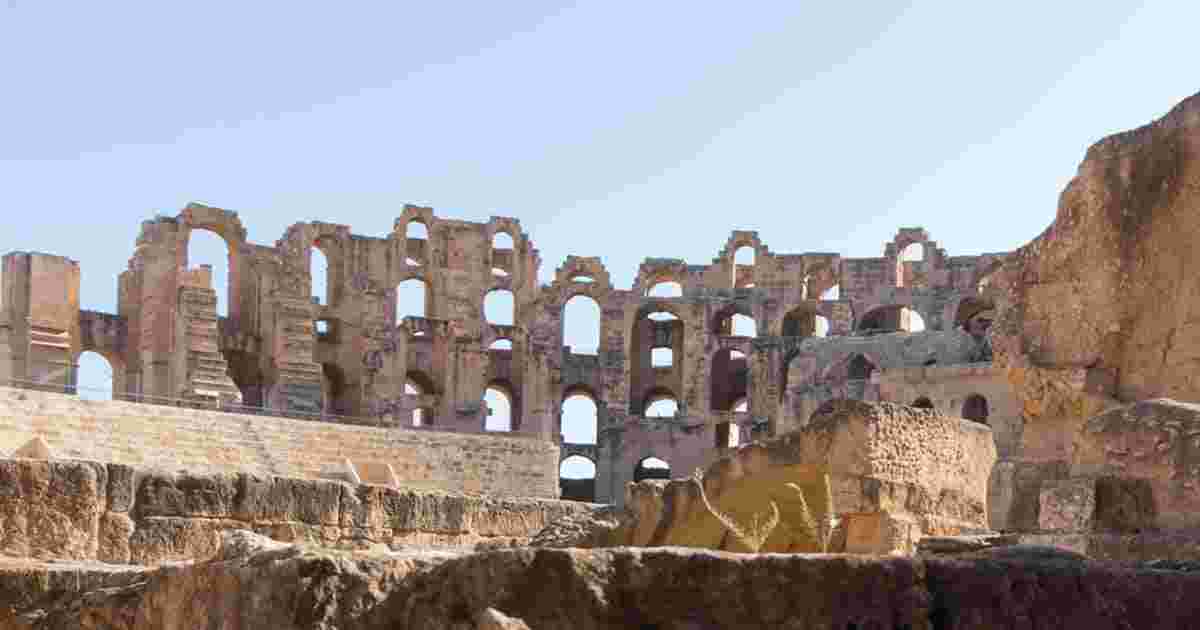 It doesn’t take much to picture this city as it appeared in the 9th century BCE, when it stood in all its ancient glory. A must-see in the capital. 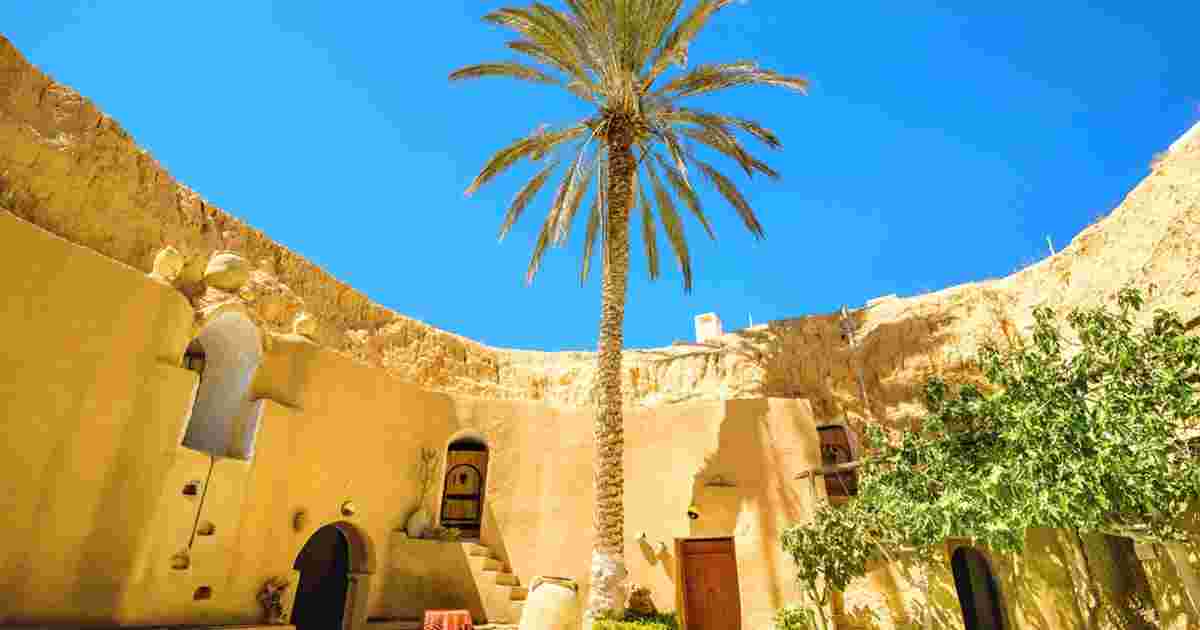 The Berber village at Matmata is one of a kind, with its underground dwellings built into the earth. It was also the site of the filming of Star Wars. 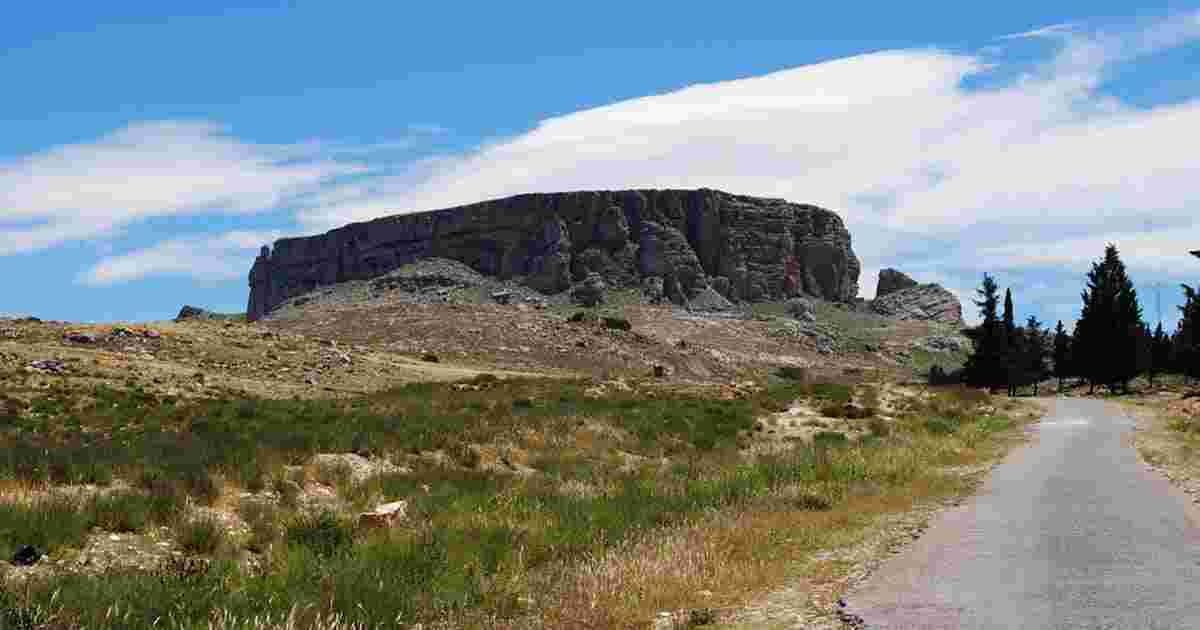 Circling the UNESCO World Heritage list, Tunisia’s own Table Mountain was the backdrop from Roman–Numidian conflict two thousand years ago. But the real drama’s in the view. 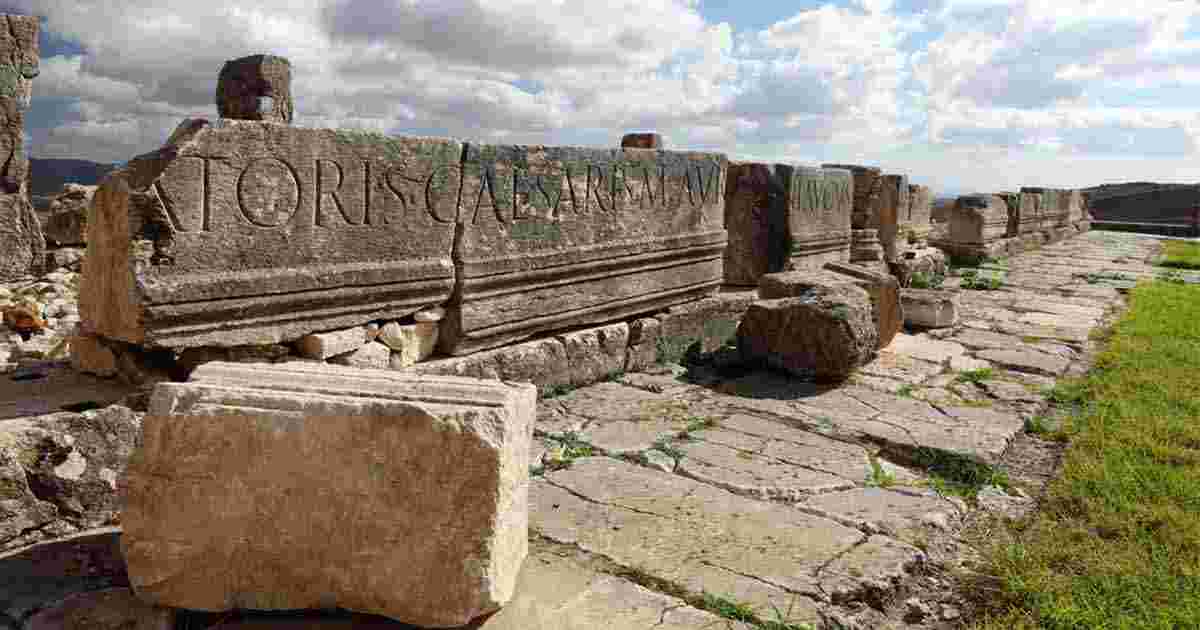 This ancient, UNESCO-listed Roman Berber city is arguably the most magnificent Roman site in all of Africa. 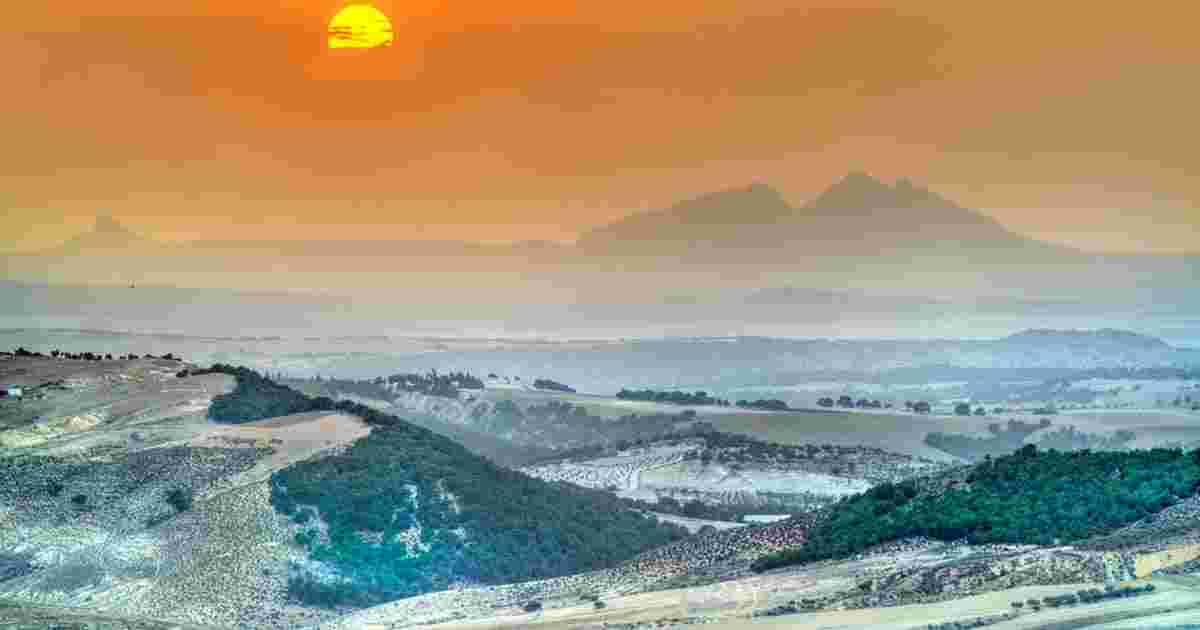 Spend the night in an authentic picturesque village on the edge of the Atlas Mountains; it’s the highest elevated city of Tunisia. 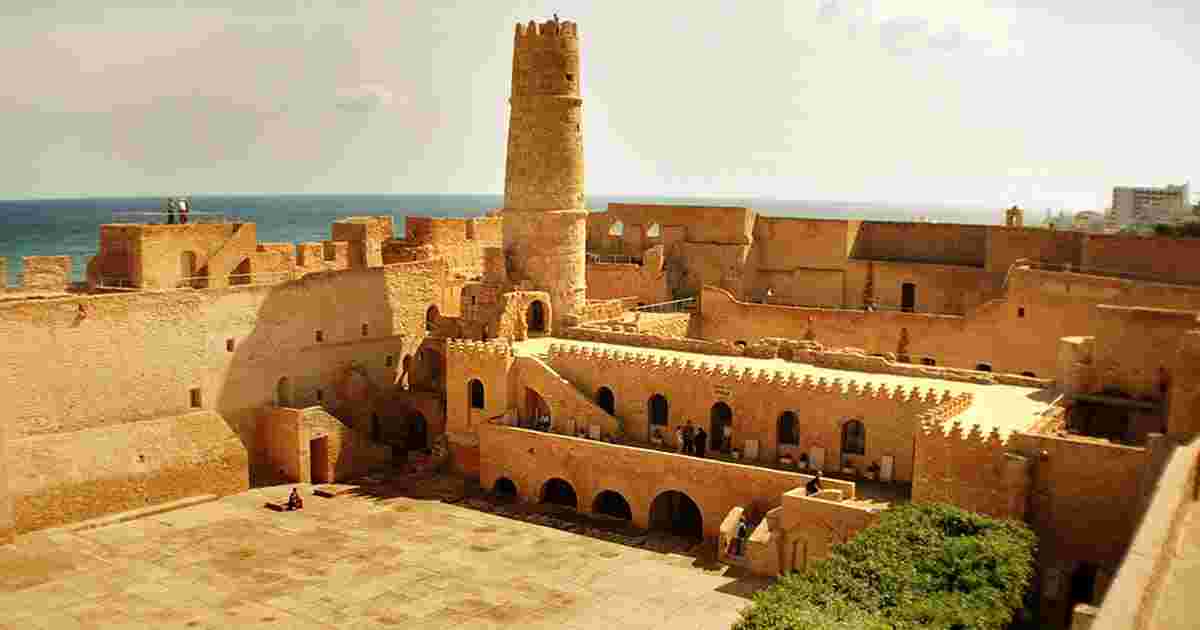 Venture into an 8th-century fort complex in Monastir 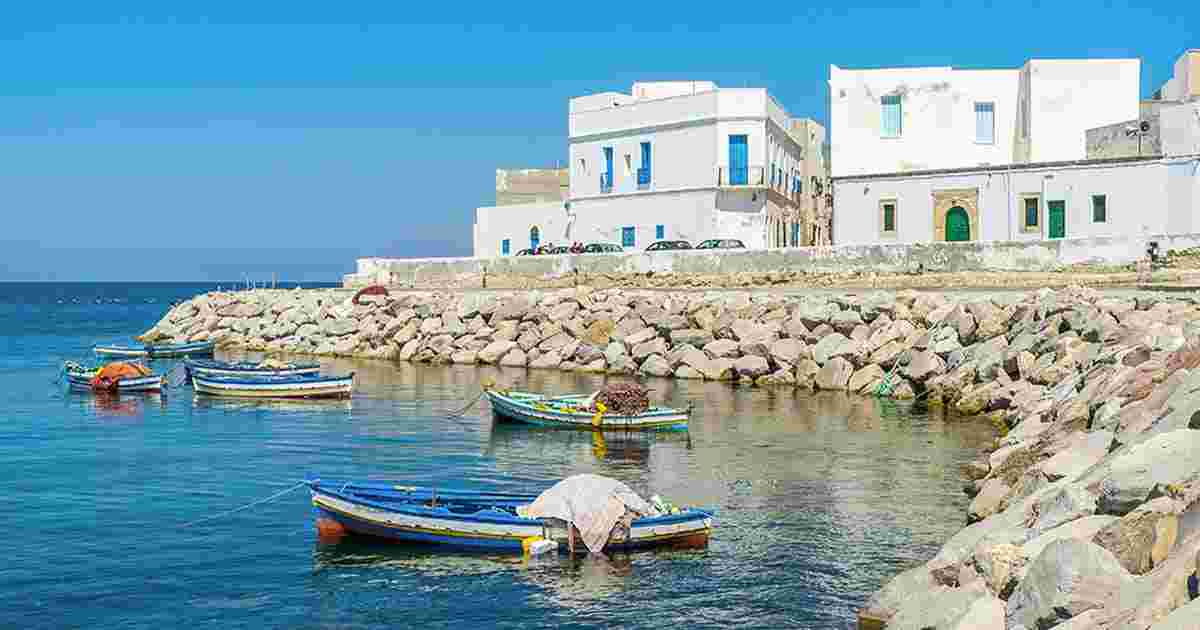 Kick back in the relaxed, fishing town of Mahdia 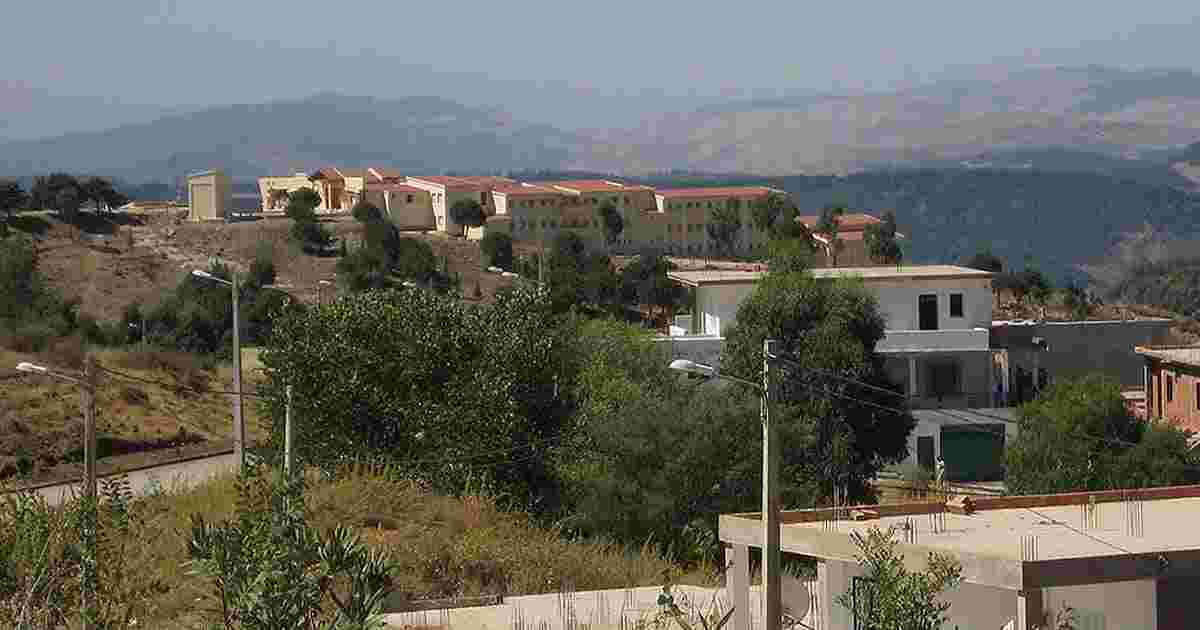 Relax in the French-built hilltop station of Ain Draham

Tunisia boasts a Mediterranean climate in the north and an arid, desert-like climate in the south. Tunisia typically receives most of its visitors in July and August, when the hot weather draws tourists to the beaches. The coldest and wettest months are January and February, although the rainfall average for this time is low and many interior Saharan regions of Tunisia do not see rainfall for years. March to May is a great time to travel as it is less crowded, the temperatures are cooler and the scenery is spectacular. November is considered the optimal time for trekking in the desert. Travelling during the holy month of Ramadan presents benefits and challenges as many restaurants close and business hours can be interrupted, although travelling during Ramadan often provides rare insight into a country and culture during this holy period. 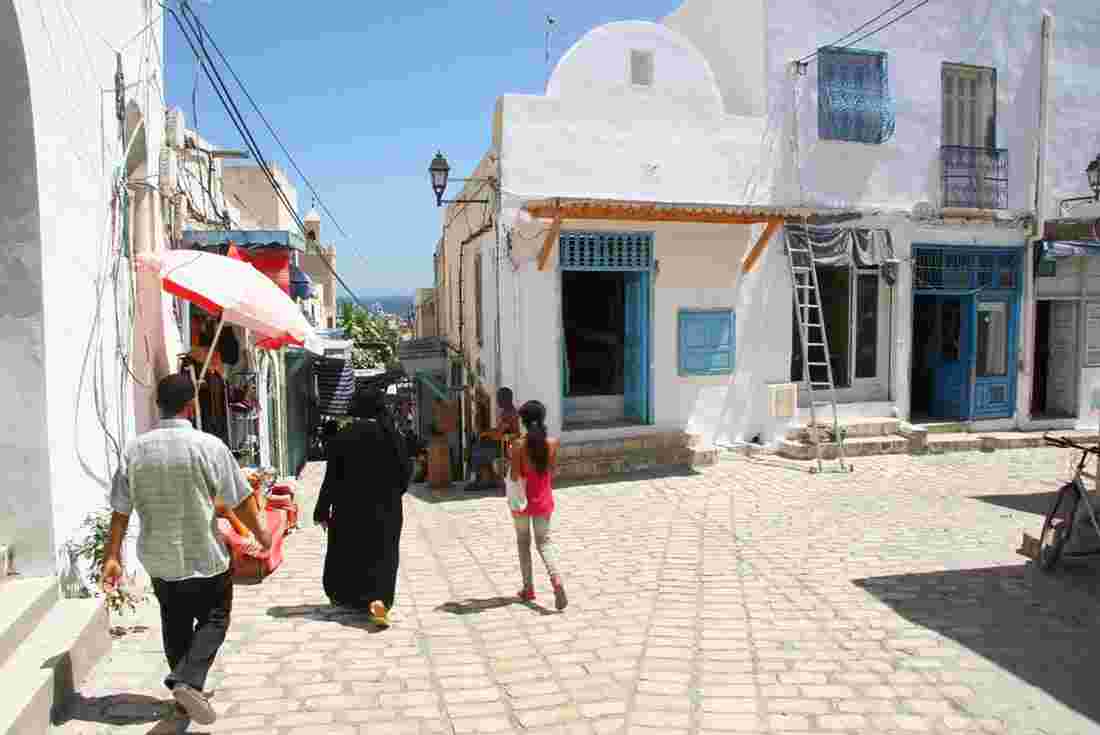 Tunisia is an Arabic country with a strong sense of history and tradition, yet a good dose of modernity. The overwhelming majority of people are Arabic speaking Muslims; nine in ten Tunisians are Berber, with the remainder a mix of European, African and Arab peoples.

These days social and political life in Tunisia is mostly secular. Since the Arab Spring – a region-wide revolutionary movement sparked in 2010 by the Tunisian Revolution – the Tunisians have enjoyed more religious and social freedom and greater democracy. Still, when travelling, it’s important to keep in mind the country’s Islamic culture. If Ramadan is on, be careful not to drink or smoke in the public presence of those practising it.

The family is an important part of Tunisian life and a good topic of conversation when meeting new acquaintances. Wearing a headscarf is not necessary for women travelling in Tunisia (unless visiting mosques), but it pays to dress conservatively. Language-wise, French and Arabic are the officials, but English is increasingly prevalent – children are nowadays taught it at school. 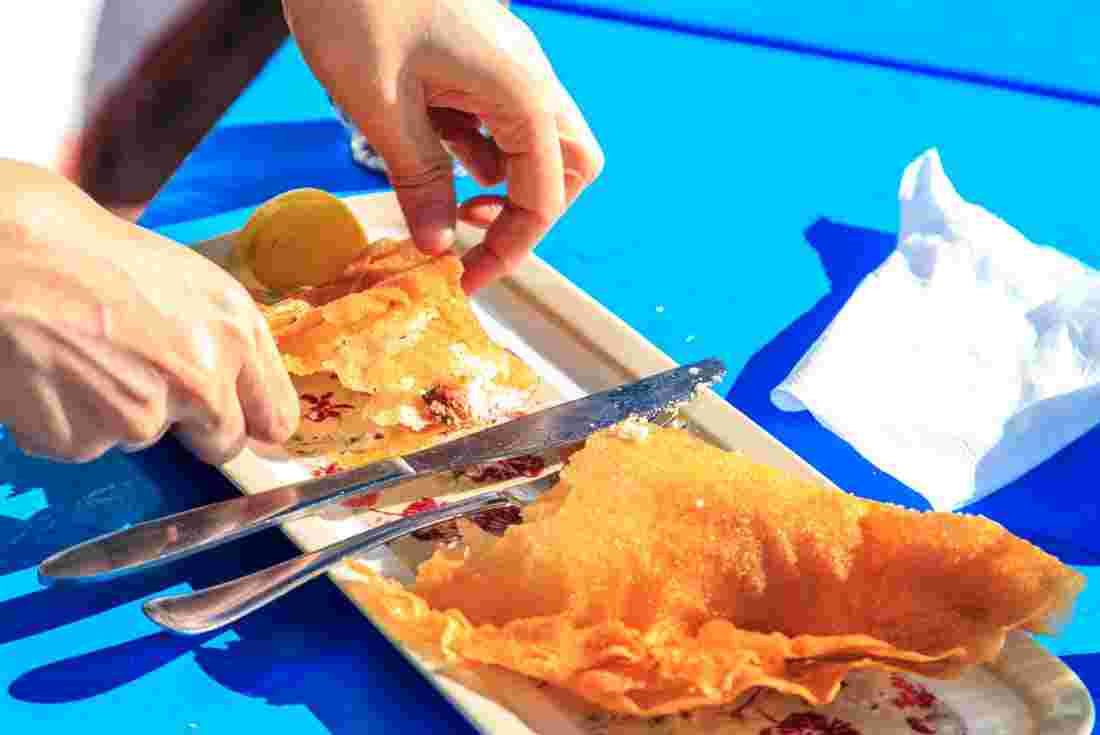 Tunisian cuisine is a mix of Mediterranean flavours, recipes from France and Italy, and Turkish and Berber influences. Seafood is naturally popular in coastal areas in the north, while hearty regional classics like Shakshouka (baked eggs in tomato) are common all over. Two major staples of Tunisian cuisine are harissa (a spicy chilli paste made with coriander and caraway seeds) and couscous (the buttery semolina granules popular in neighbouring countries such as Morocco).

Translating simply to couscous, this is the national dish of Tunisia. The Berber people are thought to have created it, perhaps as far back as the 3rd century. A simple yet delicious plate of flavoured couscous is usually accompanied by baked vegetables and chickpeas, or by meats such as beef, lamb or chicken.

Brik (or “brick”) pastry comes in many forms, both sweet and savoury. It’s the egg- and meat-filled kind you’re likely to stumble upon first. Though its name may suggest otherwise, the dough is relatively thin and delicate. A great first snack you find yourself at a street stall in Tunis.

Not to be confused with the Moroccan version (that’s very different), Tunisian tajine is similar to a quiche or frittata, more of a European-style finger food. Typical ingredients are onions, spices and ground meat, all held together with egg and breadcrumbs and flavoured with herbs and spice.

A fantastic option for vegetarians, Lablabi is a hearty chickpea soup with liberal doses of cumin and coriander. Tuna or egg are sometimes added for a bit of extra punch, and some extra harissa doesn’t go astray. Capers or chopped almonds sometimes top the dish off.

Sweet tooths shouldn’t miss the ‘yo-yo’, also known as a bambalouni, or simply Tunisian donut. Deep fried, but with the subtlety of so many other sweets from the region, it’s often lightly flavoured by rose water, orange blossom or lemon. 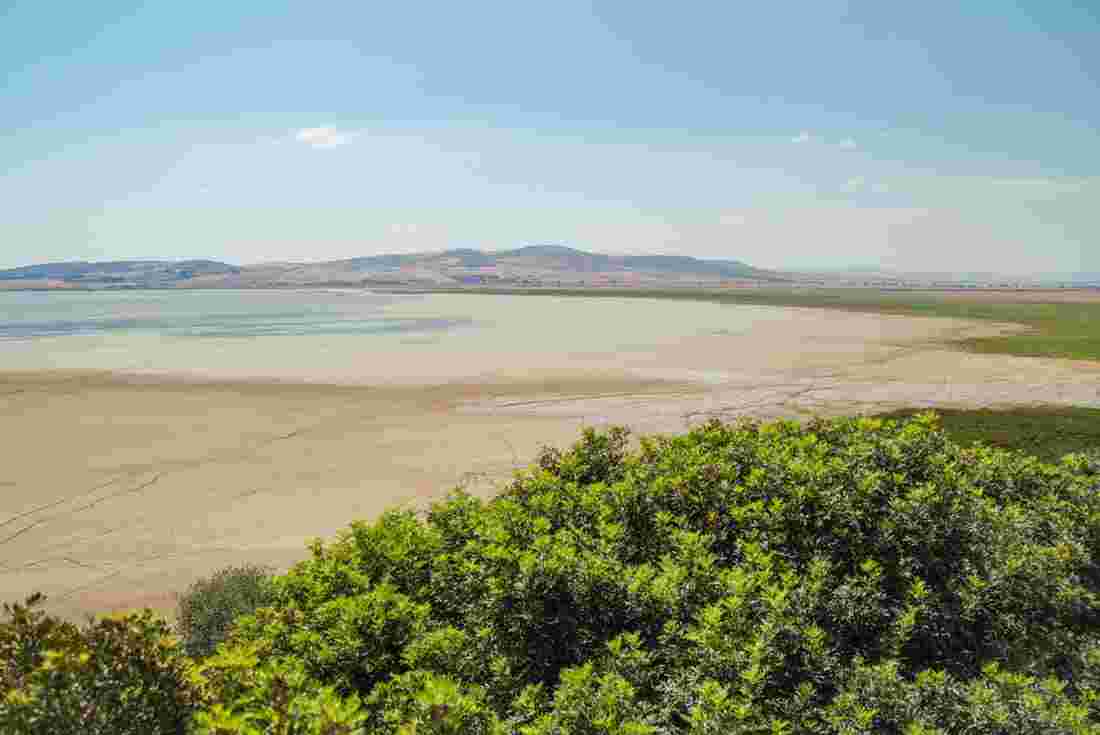 Sandwiched in between Libya and Algeria, Tunisia benefits from its location on the Mediterranean Coast. The south is characterised by arid plains and desert, which gives way to rolling hills and fertile areas prime for cultivation in the north. With a coastline along the Mediterranean Sea, Tunisia has plenty of white sand beaches that are popular with swimmers, surfers and divers. Tunisia's capital and largest city, Tunis, is mostly modern in design, except for the old medieval medina in the middle of town. 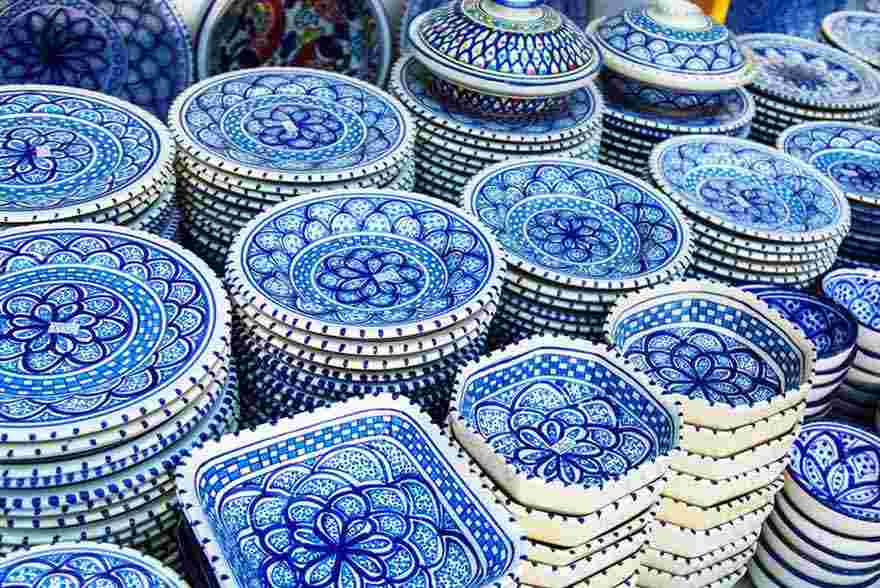 Tunisia is a treat for those who love to haggle the North African way. At the country’s many souqs and medinas, you can get a great price on local and authentic items. Shop for endemic spices, blown-glass perfume bottles, traditional ceramics and more.

You may like to purchase a Tunisian rug, an item that will be truly evocative of your stay in the region. Kairouan is a particularly good place to shop for a rug. Just look out for the ONAT (Office National de l’Artisanat Tunisien) stamp of approval on the back of your rug before you buy it, to make sure it’s authentic.

A traditional Arabic shisha (also known as a hookah) is also worth considering as a souvenir. It’s the apparatus used to smoke the characteristic flavoured tobacco of the Middle East. It’s not for everyone, of course, but travellers are known to buy them on their aesthetic qualities alone. 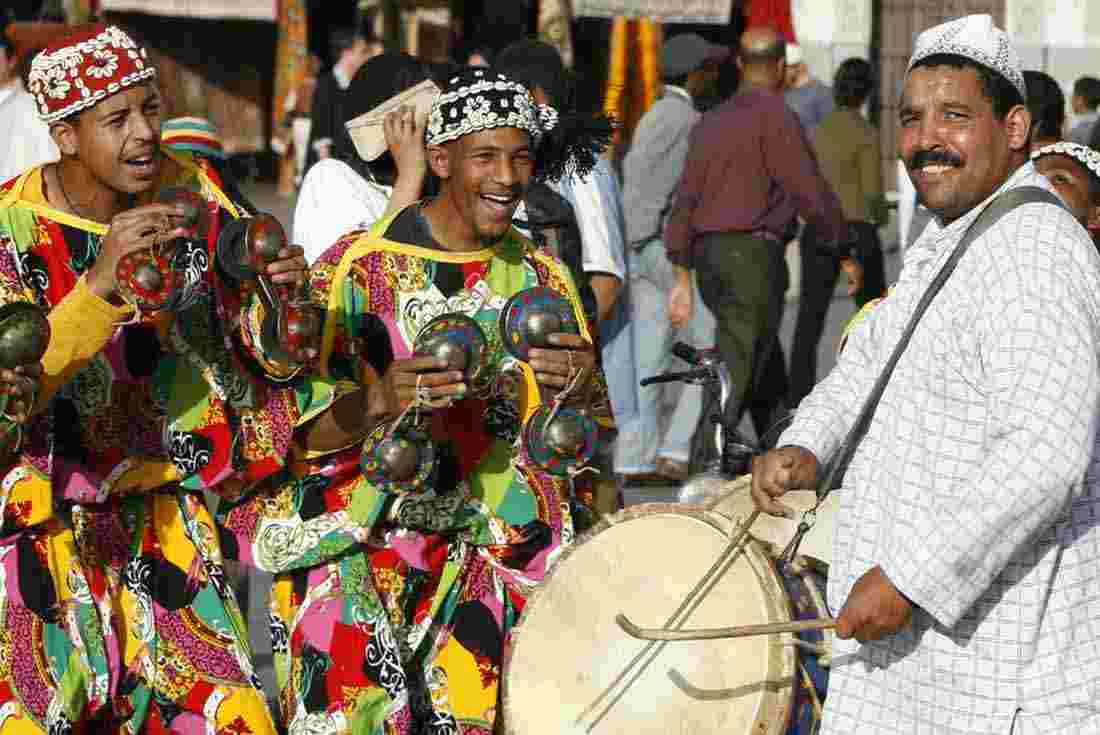 This three-week festival brings together a miscellanea of arts from across the country. See performances, eat African cuisine and enjoy the biggest carnival parade in Africa.

Festival of the Sahara

It started as a Bedouin marriage market but became a full-blown celebration of arts, culture and sports in the region. There’s delicious food, military parades, greyhound racing and much more.

Ulysses immortalised the island of Djerba when he visited thousands of years ago. The island comes alive yearly with cultural events and performances from across the Mediterranean.

Intrepid takes the health and safety of its travellers seriously, and every measure is taken to ensure that trips are safe, fun and enjoyable for everyone. We recommend that all travellers check with their government or national travel advisory organisation for the latest information before departure:

Do I need a visa to travel to Tunisia?

Is tipping customary in Tunisia?

Tipping is expected by most service workers in Tunisia. Drivers, waiters, porters and other hotel staff will generally expect a small tip for serving you at a restaurant, showing you to your room or carrying your bags. Set aside some dinars for this.

Can I use my mobile/cell phone while in Tunisia?

Mobile phone coverage is generally good in Tunisia, especially in large cities. Coverage may not be available in more remote areas, especially if travelling through the desert. Ensure you have global roaming activated with your mobile carrier before you leave home if you wish to use your mobile while in Tunisia.

You'll have to adjust to different standards of hygiene and sanitation while in Tunisia. The standard toilet is of the squat variety and this may take some getting used to, although western-style toilets can be found in some tourist areas.

Can I drink the water in Tunisia?

Exercise caution when drinking water in Tunisia. For environmental reasons, try to avoid buying bottled water. Instead, fill a reusable water bottle or canteen with filtered water. Ask your tour leader where filtered water can be found, some hotels we stay in may have drinking water available.

Major credit cards are usually accepted by large hotels and shops in the cities and areas frequented by tourists, but are less commonly accepted by smaller vendors, in remote towns and rural areas. Make sure you carry enough cash for purchases, since credit cards aren't always an option in Tunisia.

ATMs can be found in large cities like Tunis but are less common in rural areas and smaller towns. It’s best to carry plenty of cash with you if you’re travelling out of the city.

Do I need to purchase travel insurance before travelling in Tunisia?

You absolutely need travel insurance when visiting Tunisia. All passengers travelling with Intrepid are required to purchase travel insurance before the start of their trip. Your travel insurance details will be recorded by your leader on the first day of the trip. Due to the varying nature, availability and cost of health care around the world, travel insurance is very much an essential and necessary part of every journey.

For more information on insurance, please see our info page on travel insurance.

What public holidays are celebrated in Tunisia?

Please note these dates are for 2018. For a current list of public holidays go to: http://www.worldtravelguide.net/tunisia/public-holidays

Is Tunisia a safe destination for LGBTQI-travellers?

Before making travel plans, LGBTQI travellers should be aware that homosexuality is illegal in Tunisia, punishable by imprisonment for up to three years. In recent years there has been a groundswell of LGBTQI activism, and in 2018 the president of Tunisia, Beji Caid Essebsi, publicly announced plans to decriminalise homosexuality. LGBTQI travellers should nonetheless exercise caution. 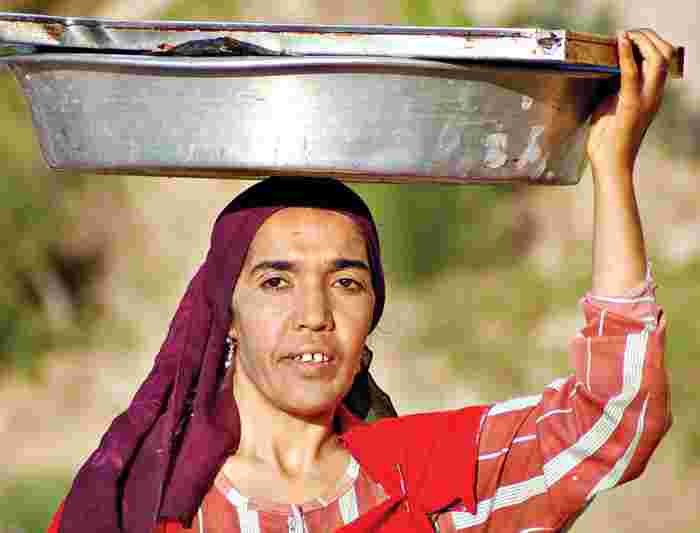 In Tunisia, we stay in locally run accommodation including guesthouses, smaller-scale hotels and homestays in an effort to support the local economies. We also visit locally-run restaurants and markets where travellers will have opportunities to support local businesses and purchase handicrafts created by local artisans.