Go behind the scenes of the local cuisine on an adventure that’s full of Turkish delights.

Get up close and personal with Turkey's age-old culinary traditions on this authentic food adventure. From ancient recipes with modern twists, to Asian-inspired feasts with European influences, take a tongue-tingling journey beyond the cookbook and discover the secrets behind delicious Turkish dishes that are as heart-warming as their people. Enjoy a cooking class in the caves of Cappadocia, forage for local produce in a regional farm outside Bodrum, discover the traditional technique behind creating the classic gozleme and explore the impressive ruins of Ephesus with an expert guide. Whether you’re wandering through the passageways of Istanbul’s Grand Bazaar or flying high in a balloon above the fairy chimneys of Goreme, embark on an experience that goes above and beyond what you think you know about Turkish cuisine. 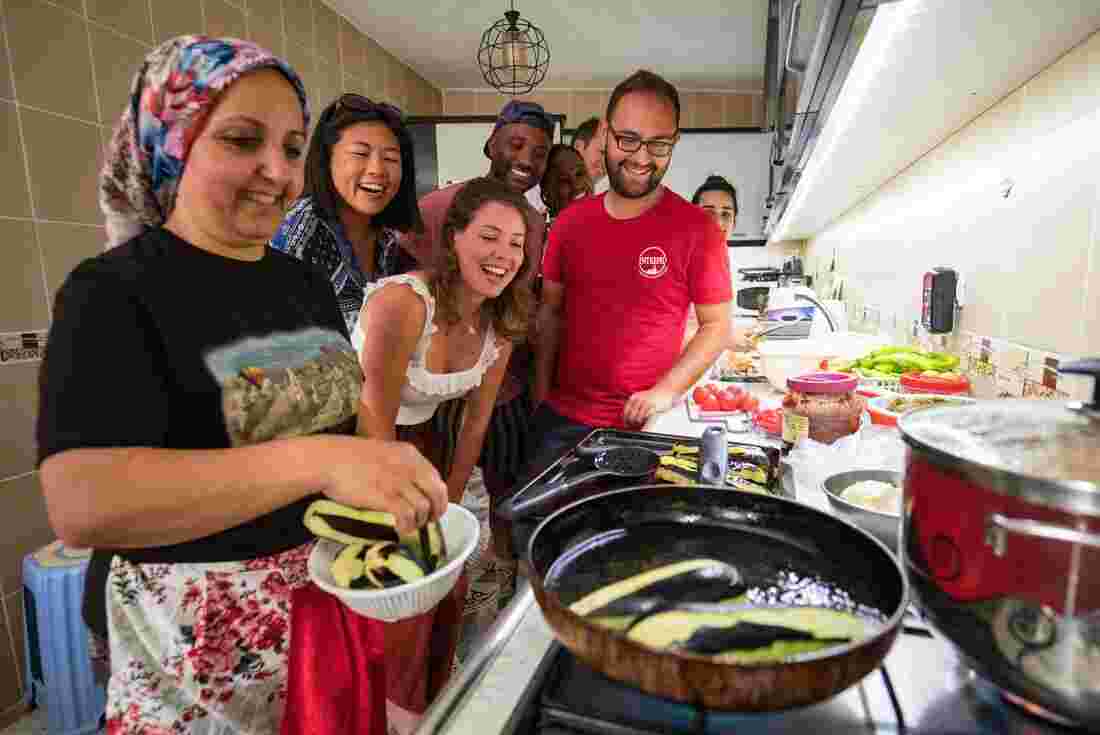 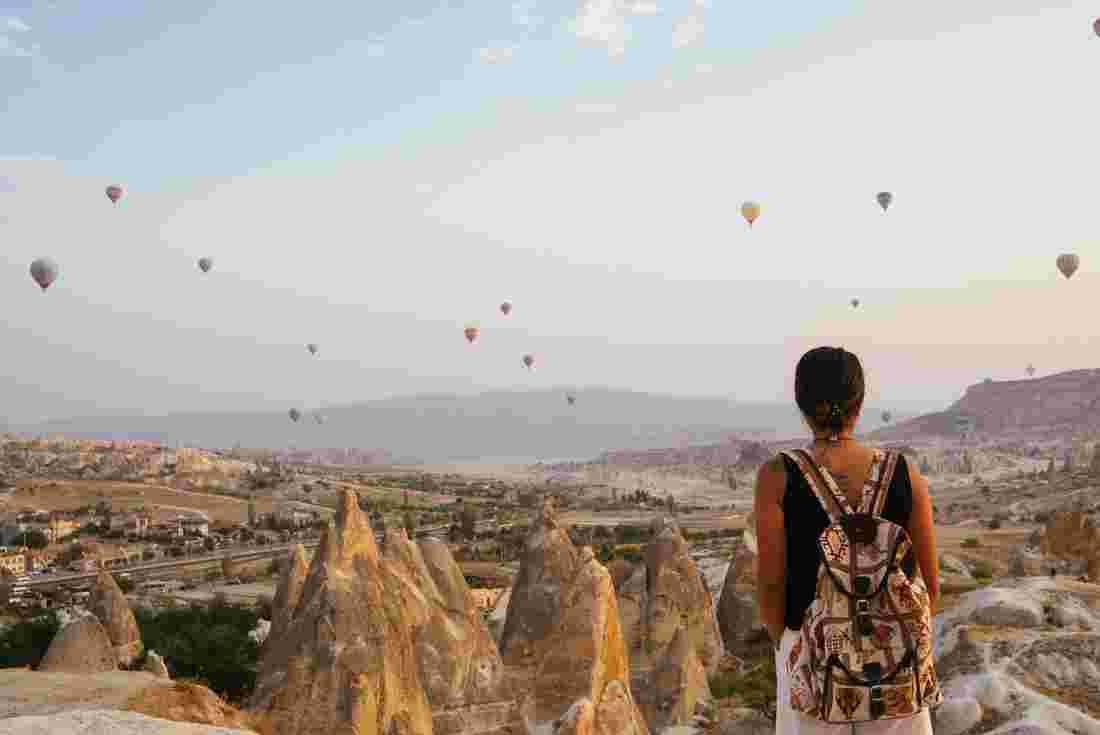 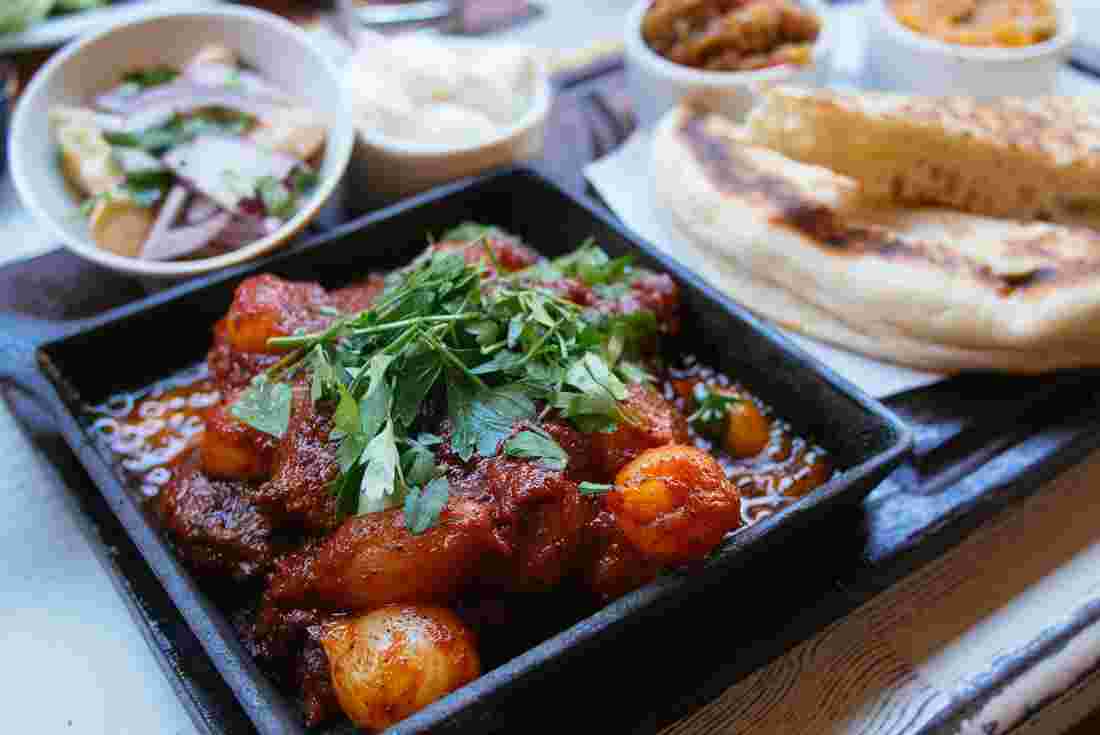 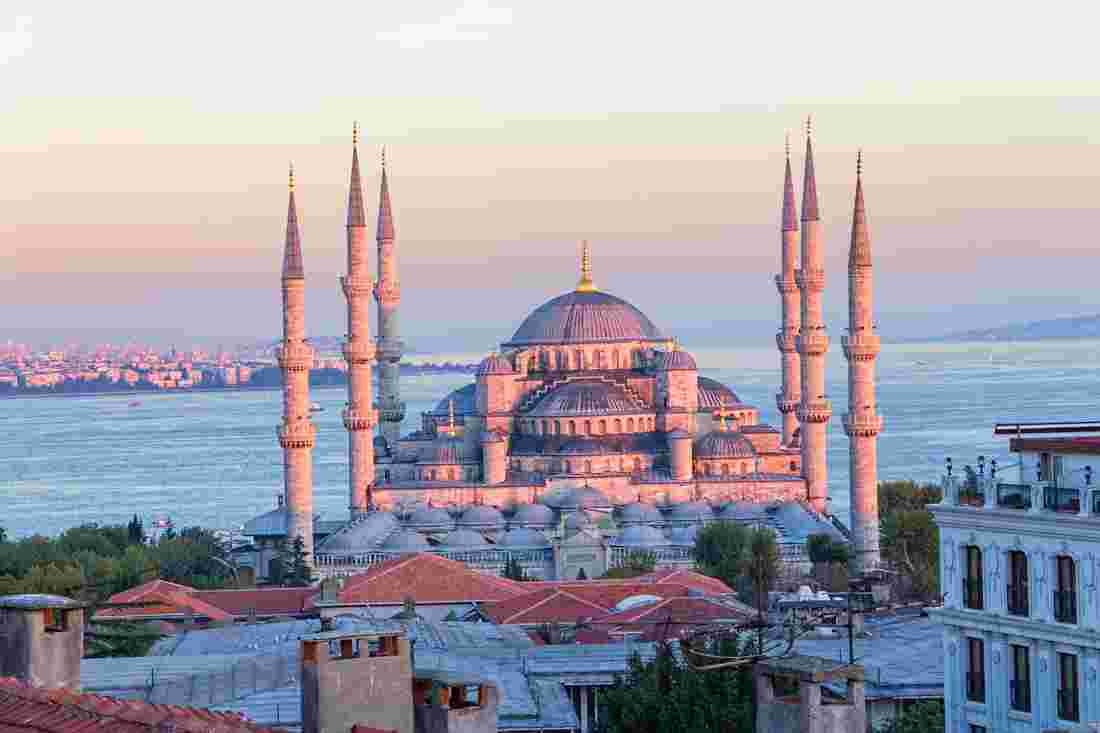 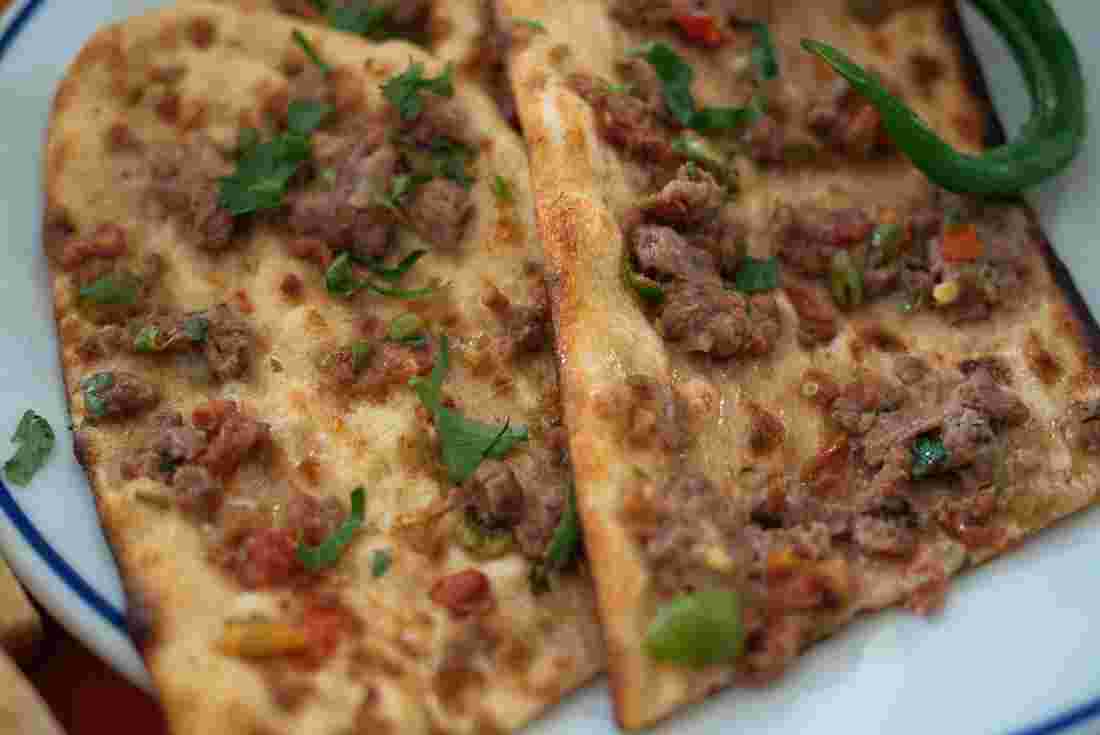 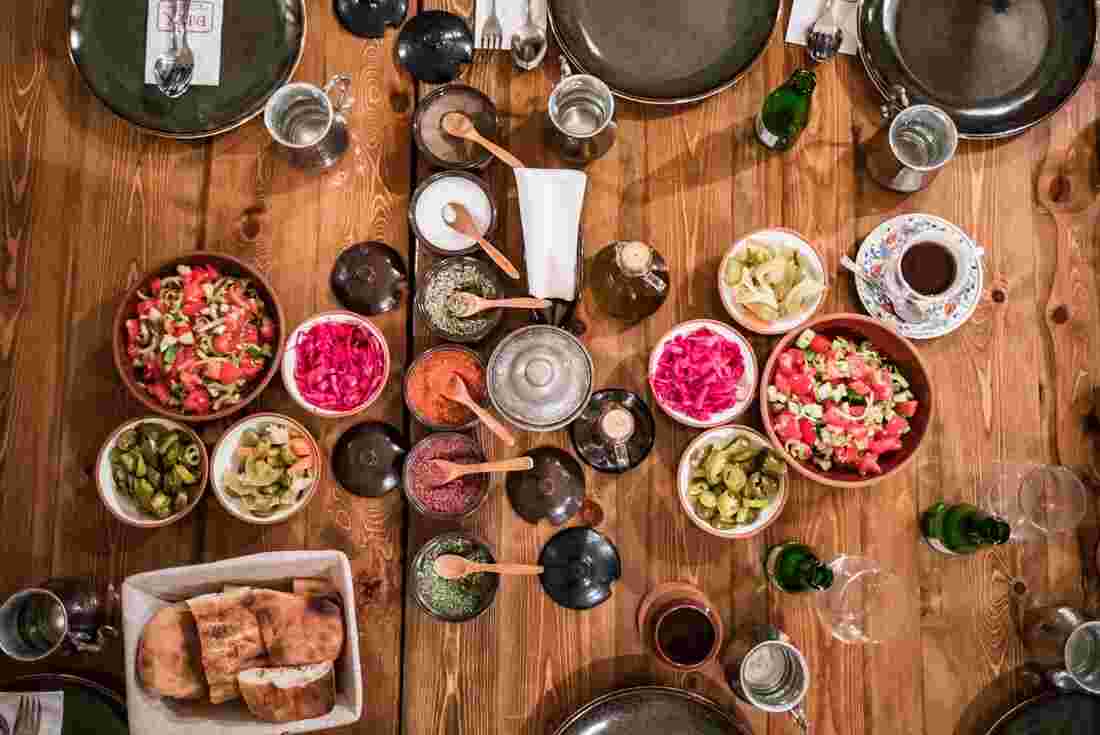 Hosgeldiniz! Welcome to Turkey. Istanbul is the only city in the world to straddle two continents, so when you explore the streets, you'll see a great clash of east and west, that’s represented not only in its architecture, but in its delicious cuisine. Your Real Food Adventure kicks off at 6 pm today with an important welcome meeting, however if you arrive early, feel free to go out and explore what this captivating city has to offer. Following the meeting, head out for your first taste of Turkey with a classic – a kebab. While you might be familiar with the shaved meats and pita bread sensation, nothing beats the kind they wrap up in Istanbul. Please let your leader know beforehand if you will be requiring a vegetarian option (the eggplant kebab is also a winner).

Start the day by heading to the celebrated Egyptian Spice Bazaar on a guided walking tour, meet a spice merchant, sit down for a Turkish coffee and savour a typical Turkish sweet. Continue your tour around Sultanahmet and Eminonu, taking in some of the most celebrated sites of the city, such as Suleymaniye Mosque and the Hippodrome. The area around Eminonu boasts some delicious street food, and local favourites include barbecued corn, roasted kestane (chestnuts), and of course Turkish delight. In the afternoon, jump on a ferry and in just 20 minutes you’ll arrive at the side of Turkey that lies on the continent of Asia, and the vibrant neighbourhood of Kadikoy. Hit the Sarkuteri (delicatessen) to sample some olives, pastirma (seasoned cured beef) and a variety of delicious cheese. Grab some provisions and head out for a picnic with your fellow travellers.

Fly from Istanbul to Bodrum (approximately 1 hour). Located on a bay on the Aegean coast, the region is all about hilly landscapes, rustic villages and beautiful bays. Bodrum is a relaxing and stunning corner of Turkey, with charming resorts adored by sailors and beach-lovers alike. But don’t be deceived – while it may be popular among international visitors, the region retains an authentic side, with traditional Turkish cuisine and incredible ancient ruins. Check in to the hotel and spend some time exploring the town, then take a public dolmus (bus) to meet a local wine-making family. The Yurut family have been making wine for 20 years, and now produce 12,000 bottles a year. Learn about their journey and perhaps find a new favourite drop.

What better way to discover the local produce than pick it yourself? Today you'll journey to a homestead and join farmers in the fields and hot houses. Forage for vegetables and pull them all together to make a gozleme using traditional techniques, this delicious savory flatbread stuffed with variety of fillings is a Turkish favourite. Don't forget your hat and sunscreen, in addition to your appetite, on this fun day out discovering regional produce.

Catch a public bus to Selcuk (approximately 3.5 hours) today and take the time to wander around this fascinating town on arrival. On the slopes of Ayasoluk Hill lie several historical buildings, including the Isa Bey Mosque and the Grand Fortress. Selcuk is also home to one of the Seven Wonders of the Ancient World – the Temple of Artemis (though sadly only a single pylon remains). This evening you will visit the Sirince, a local village steeped in Greek Ottoman tradition – it's a photographer's dream! Post-war settlers revived the town's wine industry, which makes use of local fruit. Enjoy a tasting and consider buying a bottle to take on a walk up a gentle slope through cobbled streets and alleys to an atmospheric garden cafe. Up here you'll see how manti (Turkish stuffed dumplings) are made. After trying your hand preparing them, feast on a serving for dinner.

Today you'll visit Ephesus, one of Turkey's most important ancient sites. Explore this beautifully preserved classical city with your local guide who will bring its colourful 1500-year history to life. Watch in awe as the sophistication of this former metropolis reveals itself. It had running water, public toilets, a renowned medical institute, a brothel and Roman baths. The theatre is well-preserved and regularly hosts concerts, but the marvellous library might just be the highlight. Head back to Selcuk to hit the local market and buy some vine leaves, then spend an hour or so adding rice and spices and rolling them into tasty morsels called sarma – just perfect for the train picnic tonight. Travel to Izmir to board the overnight train, which features first-class cabins with a fridge and a washbasin, and twin beds with all bedding provided.

Arrive in Konya by early morning, then take a private transfer to Goreme (approximately 3 hours). This is your gateway to the fabled fairy-chimneys of Capadoccia. Perhaps stop for a mid-morning snack of etli ekmek, a larger local variation of the traditional Turkish lahmacun: flat bread baked with ground meat, tomato, peppers and onion. Stop in at Derinkuyu, the astounding old subterranean city that goes as deep as 60 metres underground. It used to have wine and oil presses, cellars, refectories, stables and chapels, not to mention some 20,000 residents. For lunch perhaps hit a local pide saloon for Turkey's answer to the Italian pizza, enjoy toppings like grilled lamb, black pepper, tender spinach, fresh egg and Turkey’s famed peynir cheese made from sheep’s milk. For the next three nights you'll stay in the village of Ortahisar, which is famous for its friendly inhabitants, picturesque stone houses, narrow streets and lovely churches as well as the castle-like rock formation after which the town is named.

For early birds, a hot air balloon ride over the majestic landscape is a highly recommended experience. Please advise your leader if you wish to make a reservation as Intrepid only recommends balloon rides by our experienced operators. The cost of the activity can vary depending on the type of flight chosen. Wander through the Soganli Valley on a hiking trip, taking in the arid surrounds and towering vistas. Take the opportunity to stop for lunch at a local restaurant in this beautiful place, savouring fresh local flavours next to the memorable landscapes. Visit one of Cappadoccia’s most famous wineries to learn about the region's 4000-year-old wine industry. Afterwards, walk through the stunning Red Valley to watch the sun set, enjoying a glass of the local wine. For dinner, perhaps try the local specialty, testi kebab. Your leader will be able to recommend a restaurant dedicated to the perfection of this delicious clay pot dish.

Enjoy a free morning to do as you please before being welcomed into the home of a local, Nuray, an award-winning regional cook. Under her tutelage, learn to prepare some classic central Anatolian dishes (the menu will depend on the season). Sit down and enjoy the results over lunch then enjoy the rest of the afternoon at leisure, perhaps visit the excellent Goreme Open Air Museum or indulge in a Turkish hammam (bath). In the evening, you might like to dine in a restaurant set inside a 475-year-old building. The testi kebab is highly recommended.

This morning, wave the fairy chimneys a fond goodbye and transfer to one of the regions airports for a flight back to Istanbul. Your incredible Turkey trip will finish on arrival at the airport your Intrepid Leader will be available to assist you with your onward travel plans. For your convenience if you are planning on spending a few more days in the city then a complimentary transfer will be available back to our starting point hotel. Your leader can help to arrange this for you.

There are currently no scheduled departures on our Turkey Real Food Adventure trip. If you are interested in other trips in the region visit one of the links below.

Indulge your taste buds on a tour of southern Italy, visiting Rome, Bari, Matera and...

1. SINGLE SUPPLEMENT:
A single supplement is available on this trip with exception of Day 6 (Overnight Train).

TURKEY:
We recommend that you check your government's advice for their latest information on travelling in Turkey before your departure and ensure that your travel insurance covers you for all areas of your itinerary. We have links to prominent government travel advisories and regular updates on issues affecting this trip on our Travel Alerts page - www.intrepidtravel.com/au/travel-alerts