Home » Sailing in Myeik, the 800-island archipelago no-one has ever heard of
Features

Sailing in Myeik, the 800-island archipelago no-one has ever heard of

It’s known as the Mergui or Myeik archipelago, a collection of 800 jungle-covered islands off the southern coast of Myanmar (Burma). It’s okay if you haven’t heard of it. Until a few years ago hardly anyone had.

Locked down to outsiders since the 1940s, Myeik opened up to tourism in the late 90s, but it’s still one of the least explored marine regions on the planet. Not a lot is known about the archipelago. The only people that actually live here are an indigenous nomadic tribe of free-diving fishermen known as the Moken. Most of the islands are completely uninhabited. Far away from the South East Asia Banana Pancake Trail, and with limited facilities and infrastructure, the only real way to explore this lost-in-time water world is to sail. And that’s what I did, on Intrepid’s Burma Sailing Adventure.

This isn’t your typical sailing adventure. It’s not even a typical Intrepid sailing adventure. There aren’t any port stops at glitzy seaside resorts. Wi-Fi isn’t a thing here. You’re more likely to come across a flotilla of Moken kabang rafts than glitterati super yachts.

So what can you expect in Myeik? Excellent question. 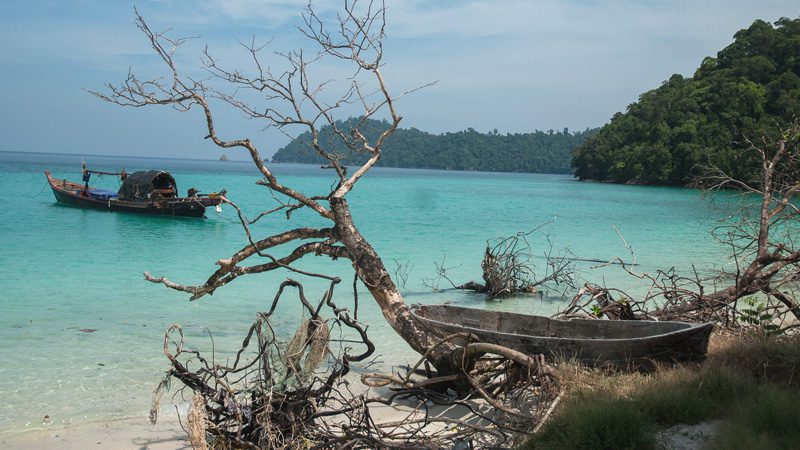 Intrepid uses modern catamarans to explore Myeik. The shallow draft lets your skipper navigate the turquoise sand banks and atolls, and with over 800 islands to choose from, it’s not hard to find one all to yourself. Your catamaran also comes equipped with kayaks and paddle boards, so engage those upper arms and take a trip to shore. Land on deserted white beaches, or just follow the coastline and lose yourself in the rhythm of paddling. The islands are a wildlife haven, with dozens of species of deer, monkey, hornbills and wild swine foraging undisturbed, much as they have for the last few thousand years. There’s no set day-to-day itinerary. Depending on conditions (and your interests) you’ve got the flexibility to explore where and how you want. 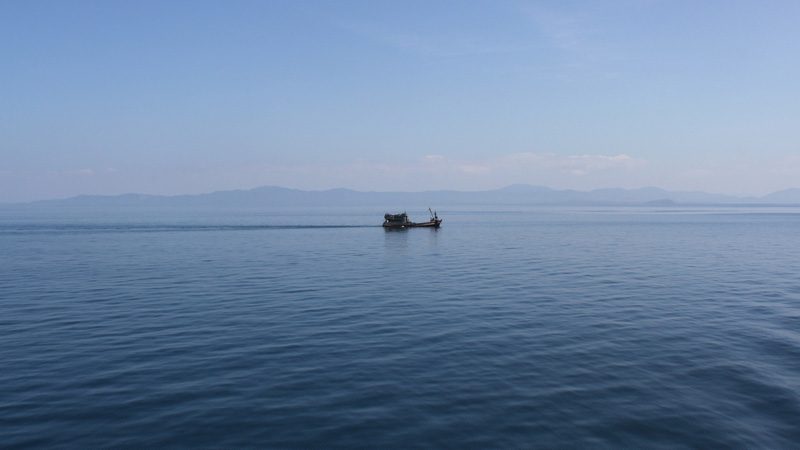 A Moken kabang, your only neighbours in Myeik. Image James Kirk, Flickr

Say goodbye to techno communications, because where you’re going, Wi-Fi and mobile phone signal are a thing of the past (or the future, if you look at it another way). Myeik is pretty much cut off from the digital world. Your boat has a few mod cons, but it’s the only thing for a hundred miles that does. In a world where we’re continually distracted by instant messaging and the irresistible urge to update our status, it’s refreshing to be disconnected and actually engage with your fellow travellers and crew. As the sun went down, we found ourselves actually talking instead of buried in a little blue screen. 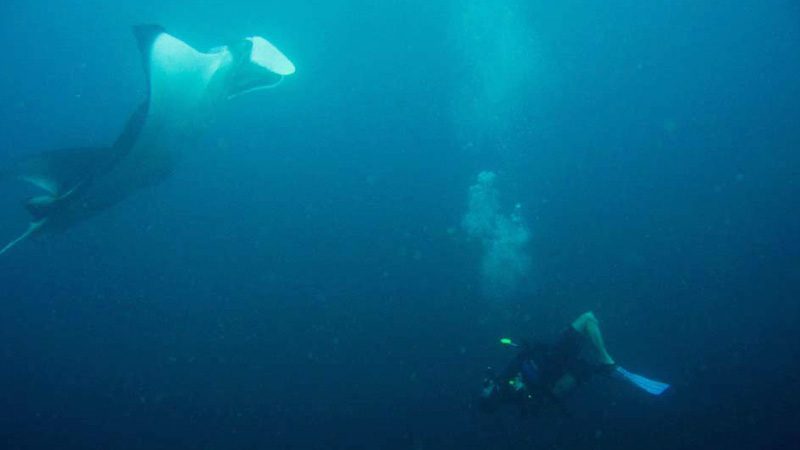 Manta ray season in Myeik runs from February to May. Image MichiKimmig, Flickr

3. Some of the best diving on earth

Someone once told me that he didn’t need to watch movies, because when he goes snorkeling the underwater world is his cinema. Because of its virtual isolation from the modern world, Myeik has some incredibly well preserved dive sites. Nurse sharks, manta rays, frogfish, ghost pipefish, soft corals, sea fans and even whale sharks – you’ll have them all to yourself from November through to May (the best dive season). Float at the waterline admiring the spikes of sea urchins that sprinkle the sandy plains below, or duck dive to explore the anemone and meet inquisitive clown fish. As your breathing settles into a calming rhythm, you soon forget about the clouds, trees, and birds above. 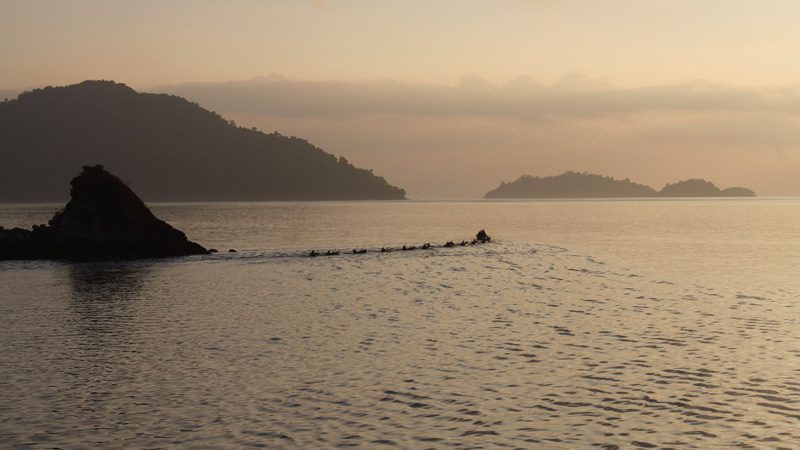 All sailors know that sunrises look very different from the water. For starters you actually watch them (instead of sleeping in and hearing about them from other people). Sleeping under the stars up on the catamaran canopy is one thing, but it’s waking up with the sun that was the real highlight of the trip for me; as the light changes in the first hour of the day, you open your eyes to see a stretch of deserted sand and a jungle-covered island right out of King Kong. The Moken are often out at dawn too, diving deep below the surface for fish, mollusks, sandworms to eat, and oysters to sell to any Malay or Chinese traders that pass by. If you’re lucky you’ll see their kabangs silhouetted against the rising sun. During the dry season, the Moken actually live on these huge rafts, only returning to solid land when the monsoon rains blow in late May. 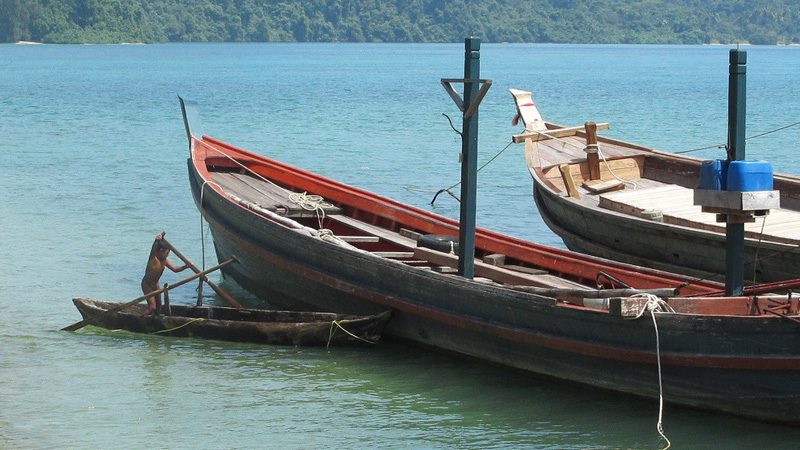 A Moken boy paddles up to a kabang (because it’s really hard to find photos of plankton). Image TaQpets, Flickr

Myeik’s beauty doesn’t fade with the sun. After the light has dwindled and the stars appear, trail your fingers through the water and you’ll see twinkling flashes of green light. This is bioluminescent plankton that rises to the sea’s surface after dark. It’s a phenomenon Myeik shares with only a few other spots in the world, like the Maldives. Sitting on the deck as your fingers leaves glowing green tracks in the water, a South East Asian beer in hand – it’s moments like that I’ll remember the most from my time in Myeik.

Want to check out Myeik for yourself? See it in all its turquoise glory on Intrepid’s Burma Sailing Adventure.

At the age of 19 I found myself living in the Malaysian jungle for 6 months. It was there that I realised the world is my home and I have an irresistible urge to explore every corner of it. I am forever making little dents in far flung parts of our planet and it is a journey that will last a lifetime. I like Icelandic chocolate, playing catch with coconuts, and planking on paddle boards. If I could be a Disney princess it would be Pocahontas.