Home » What to expect in Argentina’s La Boca barrio
Features

What to expect in Argentina’s La Boca barrio 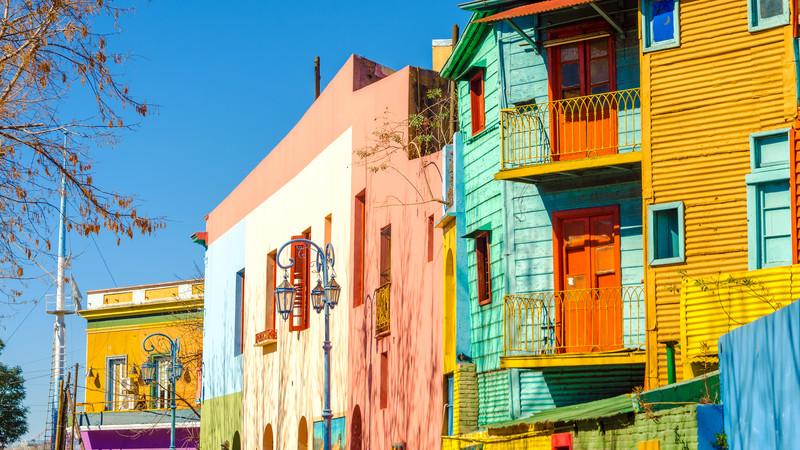 The notorious barrio’s beating heart is, without a doubt, Boca Juniors Football Club, a place where homegrown legends cut their teeth before making the big time in Europe’s premier leagues. But it’s also famous for street tango, and witnessing men and women dance with such rigour and passion to a graffiti-laden backdrop and beautiful, rustic architecture is a warm reminder that, in these here parts, the idea of romance is well and truly alive.

EXPLORE OUR RANGE OF SMALL GROUP ADVENTURES IN ARGENTINA NOW 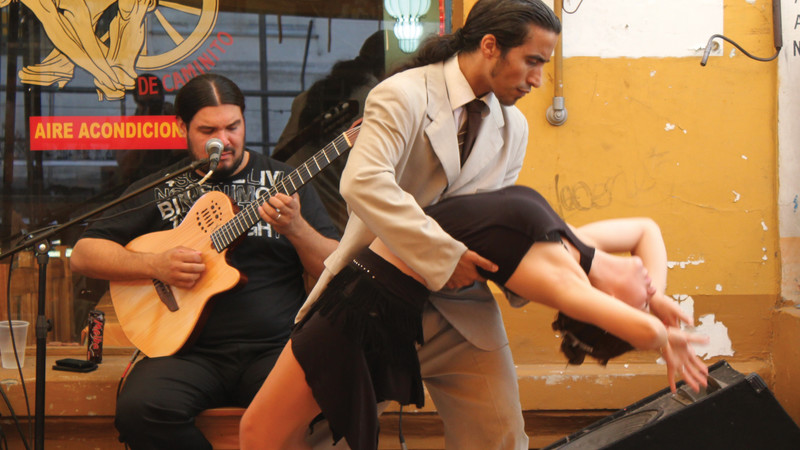 I find myself in awe, even though tango and dancing has never been an interest of mine. The woman in a red dress moves around the suited man with such artistry and finesse that it’s hard to believe there was a time that the tango was frowned upon, seen as a pastime of the poor. The choreography – the quick moves at muscle-bending angles – and stage commandment is breathtaking to someone who knows nothing about dancing, so I film a few minutes on my phone and send it to friends who know a thing or two, and let me tell you: they are impressed. The dance ends, I applaud, the crowd unites in a deafening clap. I continue on my way through the vibrant, edgy barrio until I spot a tavern serving up the Argentinian steaks other travellers won’t shut up about.

Is it really that good? Isn’t a steak a steak? 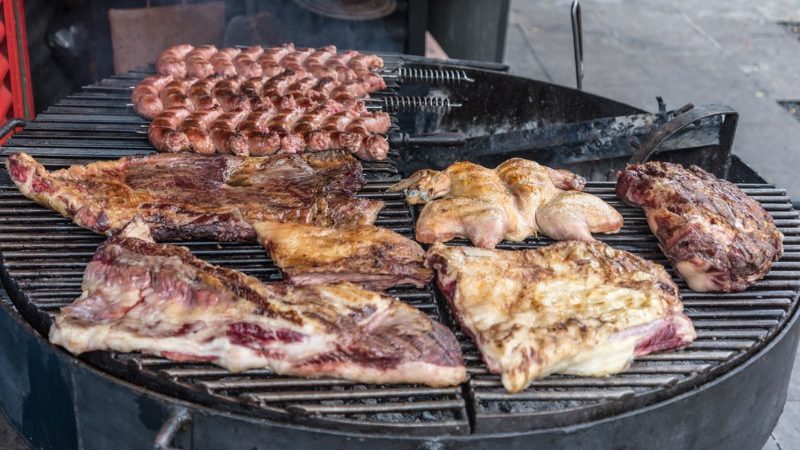 No… trust me – there are levels to the steak game and, in La Boca, you can get a taste of the country’s best. I discover that the hype is real after seeing the attention and strict approach the chefs take to char-grilling select cuts on an iron grill barbecue (called a parrilla), and it’s worth every second of the 30-minute wait. Aussies love their barbecues, but Argentinians love their barbecues. When the waiter at El Gran Paraiso asks how I prepare my steak back home, I make the fatal mistake of mentioning my gas barbecue – which is met with the same look I get when I tell Melbournians that I don’t follow Australian Rules Football.

RELATED: ALL PARRILLA, NO FILLER: THE 7 BEST STEAKS IN BUENOS AIRES

In other words: a glare of confusion and disappointment, with a dash of pity.

The portions are large, the meat tender and juicy, and the cool chimichurri sauce (consisting of olive oil, crushed garlic, pepper flakes, parsley and red wine vinegar) gives it a salty, hot tang that brings out the char-grilled flavour even more. I have it with a glass of Malbec red wine from the world-renowned Mendoza region (which I visited the week before), before leaving to indulge in a Dulce de Leche ice cream, aka Argentina’s national “jam”; a milky caramel flavour also found in spreads and cookies.

The two-story house opposite me is painted in stripes of sky blue and warm yellow. The rusted iron balconies fit two small children on them, who wave to the crowd below – when I return the greeting, they become jubilant that somebody noticed them. 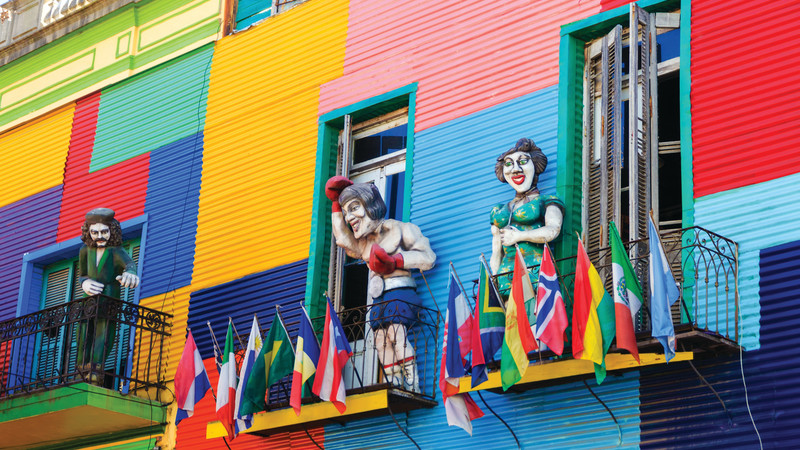 Locals have done a fantastic job of sprucing up what is an otherwise poor neighbourhood by painting over the rippled tin shop fronts in squares of red, baby pink, blue and green shades. The streets are full and taverns even more so, which serve ice-cold Quilmes beer and cheese empanadas (small pastries which can also be found with different meats and vegetarian options).

RELATED: EVERYTHING YOU NEED TO DO, SEE, EAT AND DRINK IN BUENOS AIRES

On the cute and colourful street of Caminito, I can see a series of famous Argentinians lurching over the balcony in statue form, including tango superstar Carlos Gardel, the First Lady Evita (who fought for women’s rights and represented the poor), football legend Diego Maradona, and the divisive figure of revolutionary Che Guevara (who has statues and museums all throughout the country).

If you’re a football fan and it’s your lucky day, there’s a chance to see the world-famous Boca Juniors play a match, which will show you just how passionate die-hard supporters can get. Keep in mind though that this is not only one of Argentina’s most beloved football clubs; it’s a point of reference for football fans worldwide. For this reason, most games sell out in advance, but the next best thing is to take a tour of La Bombonera stadium and its exciting museum, which is full of trophies and engaging details about the club’s star-studded history, including player overviews about Diego Maradona and Carlos Tevez. 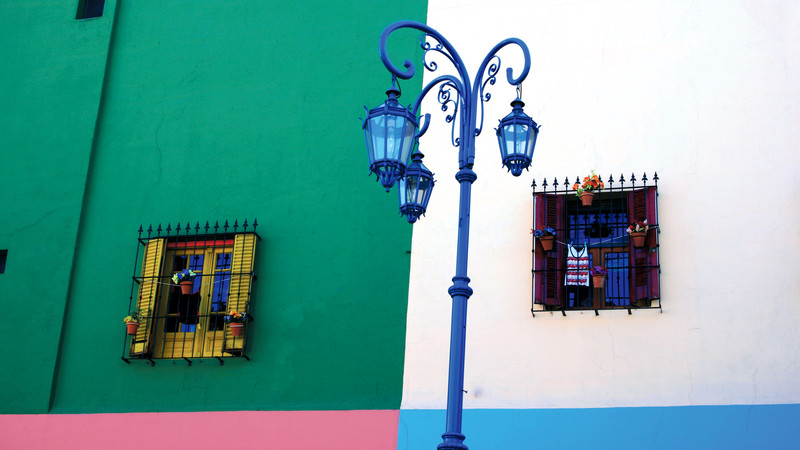 La Boca is a photographer’s dream and the perfect place to go to if you want a break from the bigger, nearby barrios of Palermo and Recoleta. I’d suggest coming here in the morning and getting the bus back in the afternoon, since after dark, it can become a little too edgy. As I attempt to catch the last tour bus back, well, it never arrives, but a friendly Argentinian couple approach and help me find my way home on the local transport, even going as far as paying for my ticket (and refusing my money), and riding with me all the way.

It’s in moments like these that I’m reminded of why I love travel so much. Places like La Boca – or Argentina at large, for that matter – are wonderful, culture relics full of good times and magnificent architecture. But it’s the warmth of the people, and the hospitality that can be found in places where life’s hard, which remind me that we’re all in this together; by visiting barrios such as La Boca, friendships can be formed, businesses can flourish, and we can each take a special memory home that we’ll talk about for ages.

After all, travel is the best education and, if you ask me, the intrepid way is the only way.