Travelling to Mission Beach is a highlight in itself and the drive there will give you a small taste of what’s to come in this tropical oasis. Cairns and Townsville are the closest cities to Mission Beach, and you can fly there from most of Australia’s capital cities. There are also regular long-distance buses that travel up and down the East Coast to Mission Beach.

If you’re travelling interstate or overseas, you can fly into Cairns or Townsville. There are daily flights from Brisbane, Sydney, Darwin and Melbourne, as well as several international destinations. From Cairns or Townsville airports, you can either rent a car or hop on a bus to Mission Beach (more on that shortly).

If you don’t have a car, you can take a coach to Mission Beach with Greyhound or Premier. Pick-ups/drop-offs are at the coach terminal near Mission Beach Resort at Wongaling Beach. There are two daily northbound and southbound trips with multiple stops at towns and cities along the East Coast. You can buy a single or return ticket (a one-way ticket from Cairns to Mission Beach costs around $20), but if you’re doing an extended trip along the East Coast, it might be worth buying a hop-on-hop-off ticket.

If you’re coming from Cairns, you can also buy a ticket for Mission Link, a daily shuttle to and from Mission Beach. It’s important to book at least 24 hours ahead of your trip, as the shuttle doesn’t run if there are no bookings.

Mission Beach is two hours south of Cairns by road, and three hours north of Townsville via the Bruce Highway. If you’re road-tripping or driving a greater distance, say from Brisbane, there are various places to stop along the way to break up the journey. The drive is really pretty, especially when you reach the Cassowary Coast. Below are the average driving times to Mission Beach:

There are no direct trains to Mission Beach, but you can take the Spirit of Queensland train to Tully (22km west of Mission Beach). The overnight train travels from Cairns to Brisbane return five times per week, stopping at most towns and cities along Queensland’s East Coast. From Tully railway station, you can get a Greyhound bus to Mission Beach, jump in a taxi or rideshare, or organise a private transfer with your hotel or tour group.

Getting around Mission Beach

There is no public transport around the Mission Beach region, but Mission Link runs a shuttle service that can drop you to various locations around the villages (again, this needs to be booked in advance).

The four main villages (Bingil Bay, Mission Beach, Wongaling Beach and South Mission Beach) are spread over 14km of coastline. There are multiple scenic walking tracks and cycling trails that connect the townships, but you'll probably want to hire a car or join a tour in order to get around and make the most of your time at Mission Beach. 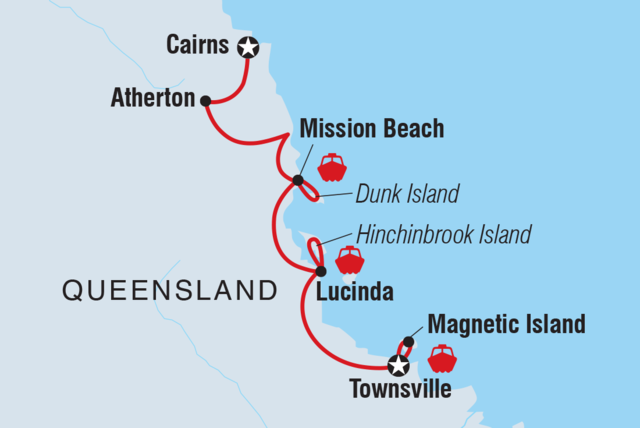 Explore the best of Queensland’s coast and islands on a 7-day adventure, including...

Brisbane to the Daintree Discovery

12 days to uncover Queensland’s best, from Brisbane to Fraser Island, the Whitsundays,...