Home » Breaking in my hiking boots: my first trek to Machu Picchu
Features

Breaking in my hiking boots: my first trek to Machu Picchu 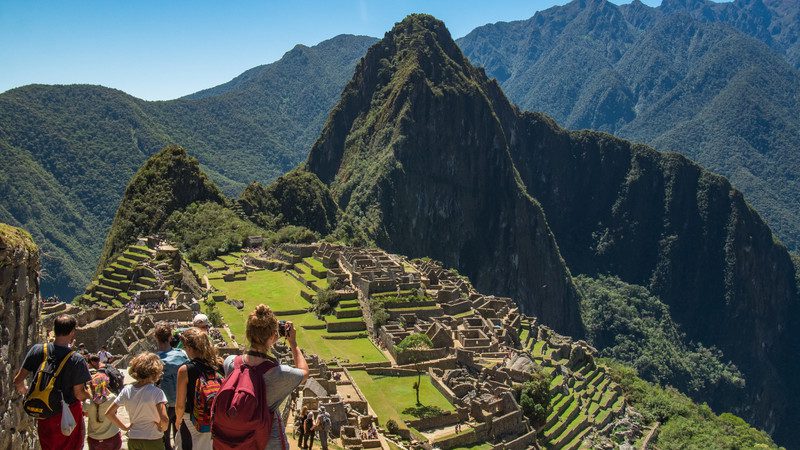 “So, first you pick out three leaves…” John says, pulling out three perfect coca leaves from the packet in Simon’s outstretched hand, “…then you arrange them like the Adidas symbol.”

John lays the leaves in a pile on his fingers and fans them out so they’re slightly overlapping, one end angling outwards. We all take turns grabbing a bundle from the bag and positioning them as our guide does. 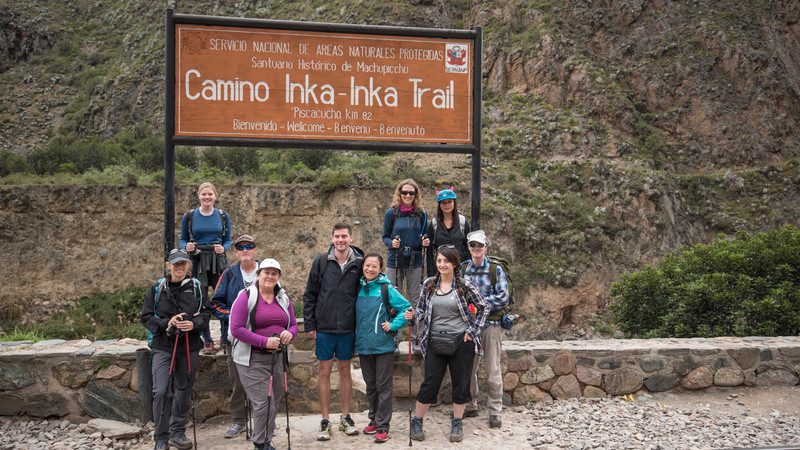 Taking on the Inca Trail. Image by Neva Sinclair.

Despite taking preventative tablets, it’s impossible to avoid the effects of altitude when your body is used to sea level. The thought niggled at me before I even left for Peru. Would I get sick? Would I struggle with the hike? Was I fit enough?

Everyone I spoke to had a conflicting opinion and it left me feeling overwhelmed. Soon after landing in Cusco, a city at 3,400 metres above sea level, I learned that exercise is much more difficult when the air is less oxygenated. But there’s no accurate way to predict a physical reaction; you just have to wait and see. A few minutes of walking through the city left my body begging for a break, while tackling a staircase always ended with me doubled-over, panting for breath.

Luckily, coca leaves are never far away. After all, this is Peru: one of the only countries in the world where its consumption and possession is legal. Airport staff offer them as you disembark the plane, hotels have baskets of them in the lobby, tea is always on the menu and mini-markets sell a variety of different coca sweets. But we were all yet to ‘chew’ them the Peruvian way. What better place to learn the traditions of the ancient Quechua than on the Inca Trail? 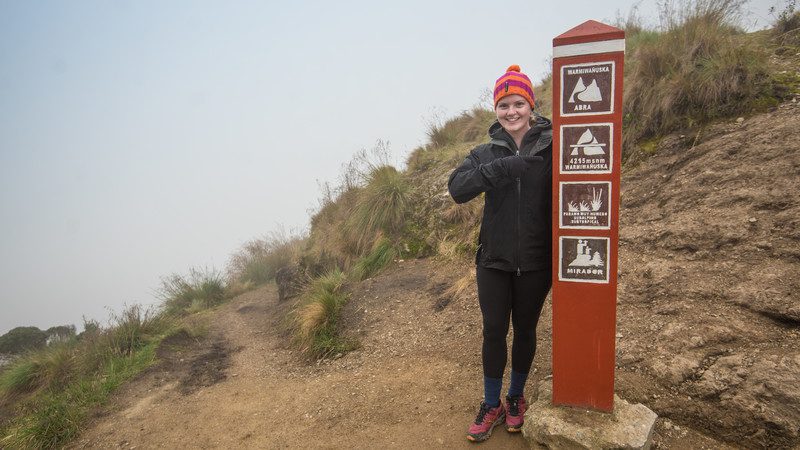 “Then, we give thanks to Pacha Mama,” John smiles, holding up the leaves and blowing on them twice; once in the direction of the sun and once towards the closest mountain. Next, he gathers the leaves up into one pile and rolls them from the bottom into a perfect little cylinder. We blow on the leaves as instructed and John watches us all struggle to copy his rolling demonstration with varying levels of success. My attempt results with snapped-off leaf segments in a mess at my feet, but I continue trying until I have a haphazard parcel in my hand.

“Now just put the leaves in the side of your mouth, against your cheek. We call it ‘chewing’ but you don’t actually chew on them. They just soften with saliva and you’ll get a bit of the flavour. Leave them in your mouth for about fifteen minutes and then spit them out.”

“So, this should get rid of my headache?” I ask, as I stuff the leaves in my cheek and we continue down the trail.

John nods, “Yes. Coca leaves are also good for appetite, thirst, fatigue and pain. In Inca times, they were used as a type of anaesthetic.”

RELATED: WHY YOU NEED A PERMIT TO HIKE THE INCA TRAIL (AND HOW TO GET ONE)

My new friends and I carry on trekking, laughing and chatting as we inch closer to the ancient city. After hours of walking, it isn’t my feet that are complaining, but my cheeks. Exploring the world is fantastic, but it’s the friends you make along the journey that enrich your memories. When I think back to this day, I won’t just remember the sights and sounds. I’ll remember the jokes and banter, the way poor Alyssia had to crawl up the steep Incan stairs, almost on hands-and-knees, and the way we mocked typical tourist photos. I’ll remember the happiness. 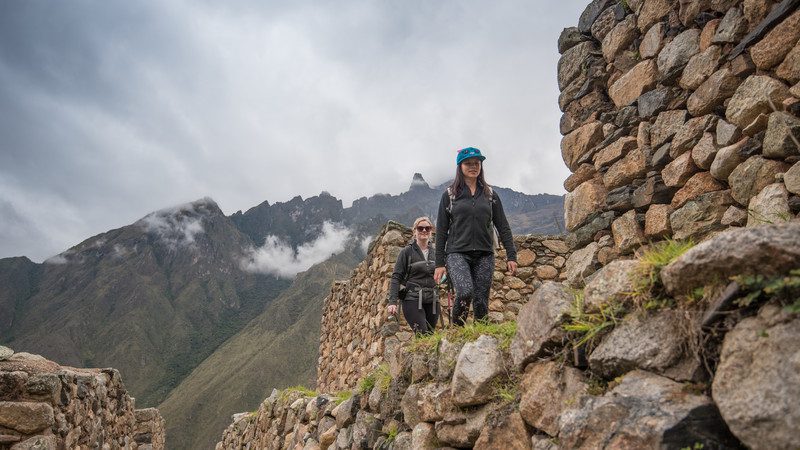 One foot in front of the other. Image by Patrick O’Neil.

Each step I take on the trail drags me further away from the western world and into my own mind. The faint taste of the coca, like a light green tea, fades into the periphery of my awareness. And instead of thinking about how many kilometres are remaining, or how many stairs we have left to climb, I’m noticing. Noticing how the surrounding mountains tower magnificently; each one shrouded in cloud, like they’re wearing individual halos. Noticing the way every Quechuan structure has been built to seamlessly blend with the geography of the land. Noticing the different plants that flourish at such high elevation. Noticing that the ground I walk on is the same ground that Inca pilgrims travelled to reach Machu Picchu and other sacred cities.

Every time we round a bend, the view seems to get better, all peaks and valleys and shameless natural beauty. If the Quechua’s never forged their trails and there was no ancient city at the end, the hike would still be worthwhile.

I’m so overwhelmed with emotion that time blurs away and I’m shocked when we reach Wiñaywayna. It’s a place I had never heard of, never even seen in photos and yet it leaves me breathless before I’ve even tackled the stairs. It has an absurd nonchalance about it, considering its terraces are wedged into an extremely steep mountain. It just appears in front of us, mid-trail, we walk through the remains of its structures and then, as quick as it came, it disappears. I’m struck by the thought that those unable to complete the hike will never lay eyes on Wiñaywayna. They may never even know it exists, much like the Inca trails 21st-century humans may never rediscover. In such a modernised world, it can feel like there are no secrets left. That everyone has seen everything and if they haven’t visited in person, they’ve seen images online. I think about the fact that mother nature – or Pacha Mama – still guards some secrets of the ancient Peruvians, with her trees and shrubbery. And I smile. Human curiosity is natural, but I can’t help enjoying the fact that there are some things we’ll simply never know.

By the time we come to the Sun Gate, the weather has turned. My now-drenched limbs are aching, quads pounding, eyes blinking closed. It’s been a long and hard 13-or-so kilometres. But I force my legs up the final stairs with every ounce of willpower still inside me and by some miracle, the landscape is visible. 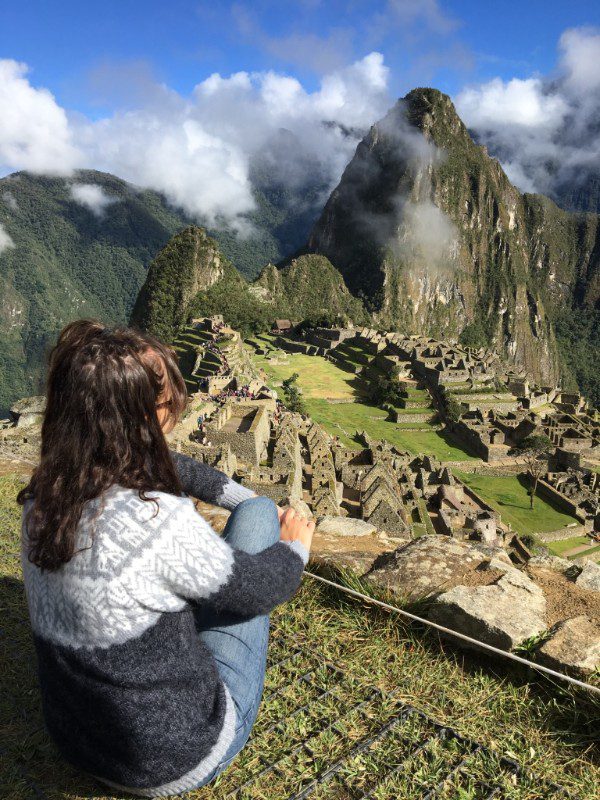 What a view! Image by Emma Calley.

There Machu Picchu stands in all its ancient glory, somehow totally unobstructed by the pounding tropical rain. It’s surreal and no matter the superlative I use to describe the moment, it won’t fit. We, the trekking team, stand with our arms around each other, awe-struck, exhausted and dizzy with happiness. There are no English words to summarise such a moment in time. In fact, descriptors cheapen the experience, so I’m not even going to try.

You just have to see it for yourself.

You CAN see the wonder that is Machu Picchu for yourself, just book a small group tour with Intrepid. 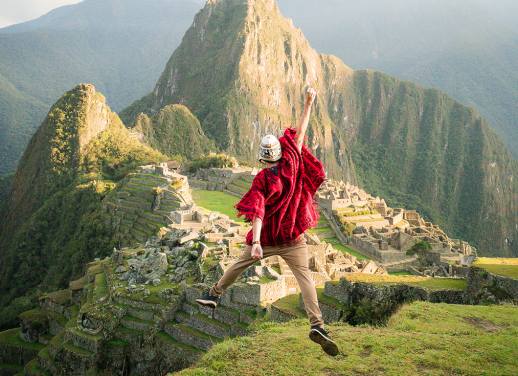 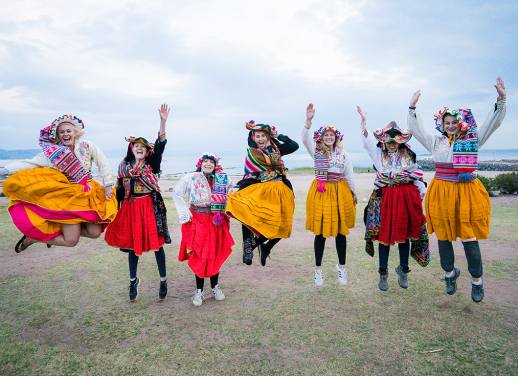 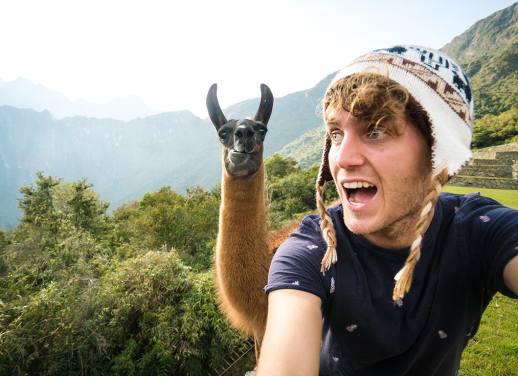 Love your writing style! Makes me reminisce of my Machu Picchu adventure from last year. I just posted about my experiences in my blog & hope to revisit the beautiful country again soon! Thanks for sharing!

Thanks so much Angela, your kind words mean a lot. Glad to hear the piece resonated with you 🙂

The best part of any trek,or trip for that matter is the friends you make along the way,I’d say.