To many travelers, the United Arab Emirates mean just one thing: a stopover. It’s a place to endure rather than to enjoy; somewhere to touch down in, scoot through, and take off from ASAP. Truth is however, those who consider the country little more than a proverbial pit stop are missing out. Beyond Abu Dhabi’s skyline and in between Dubai’s shopping malls, a whole range of real world adventures await. Hop atop a camel for a lope along desert dunes…or charter a chopper. Break bread with Bedouins…or dine with the fishes in a restaurant aquarium. Tour an old spice market…or withdraw gold bars at vending machines. This is ancient Arabia with an open cheque book. 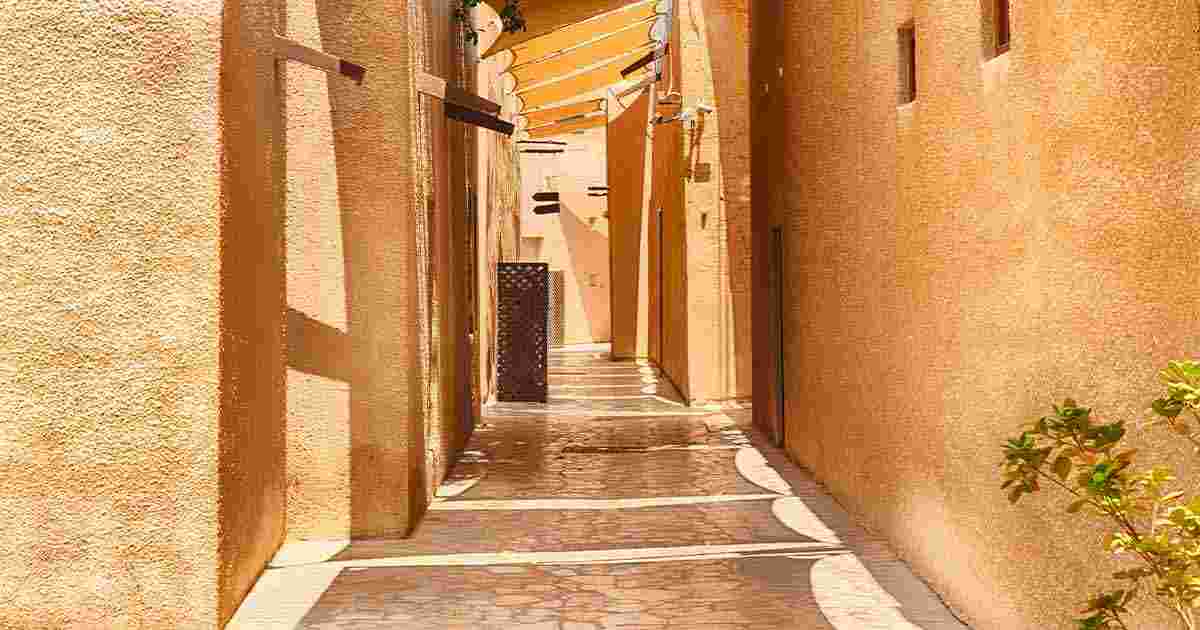 Discover the old heritage side of the futuristic city of Dubai 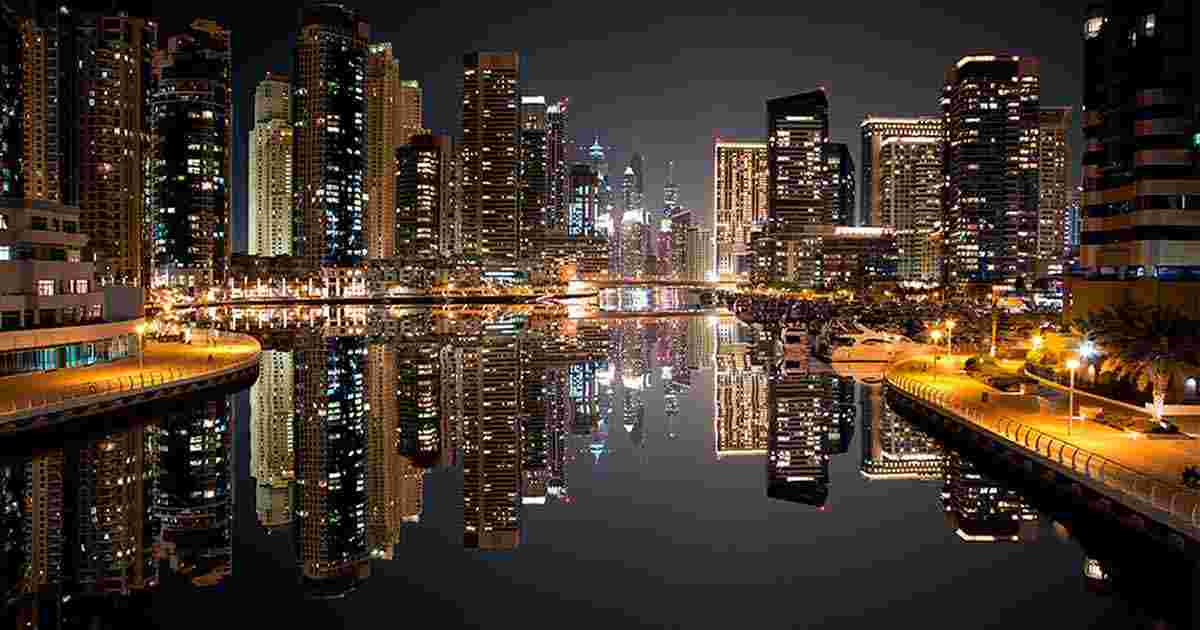 Marvel at the glass and steel icons of this desert metropolis 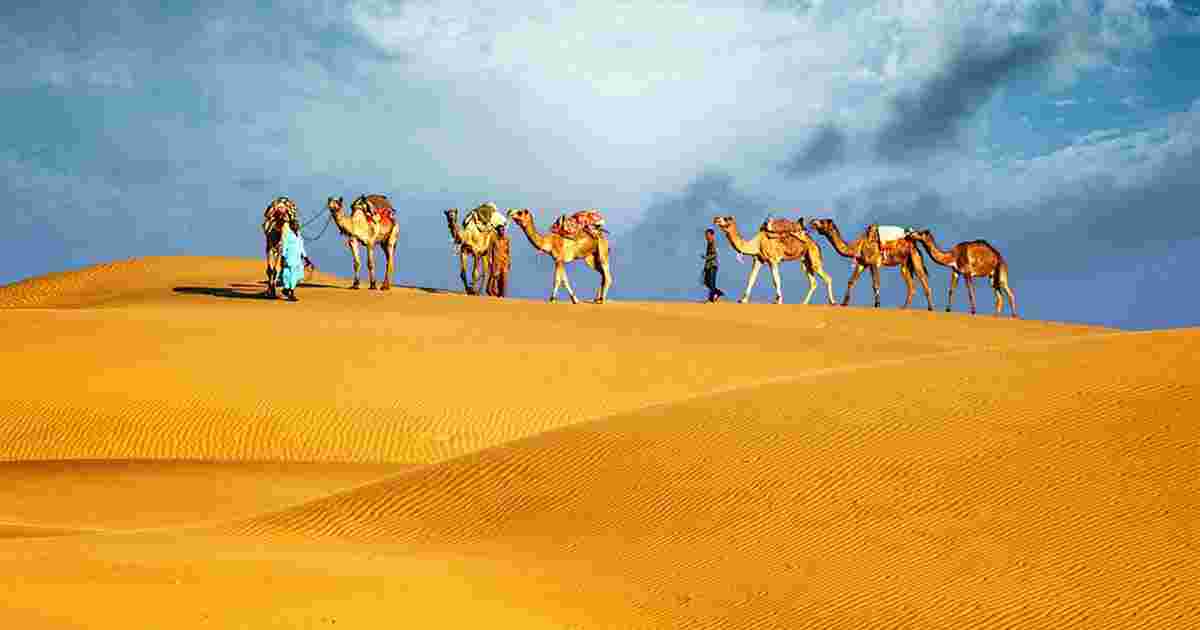 Ride through the dunes to a Bedouin desert camp

Simply put, the UAE is hot. Very hot. Year-round, daytime temperatures rarely drop below 77.F, and, during summer, roar well into the 100s. November to March are the cooler – though by no means cool – months, when tempering sea breezes drift in from the coast. Don’t be too put-off by the prospect of traveling during summer though (July to August), as the cities are covered and air-conditioned. 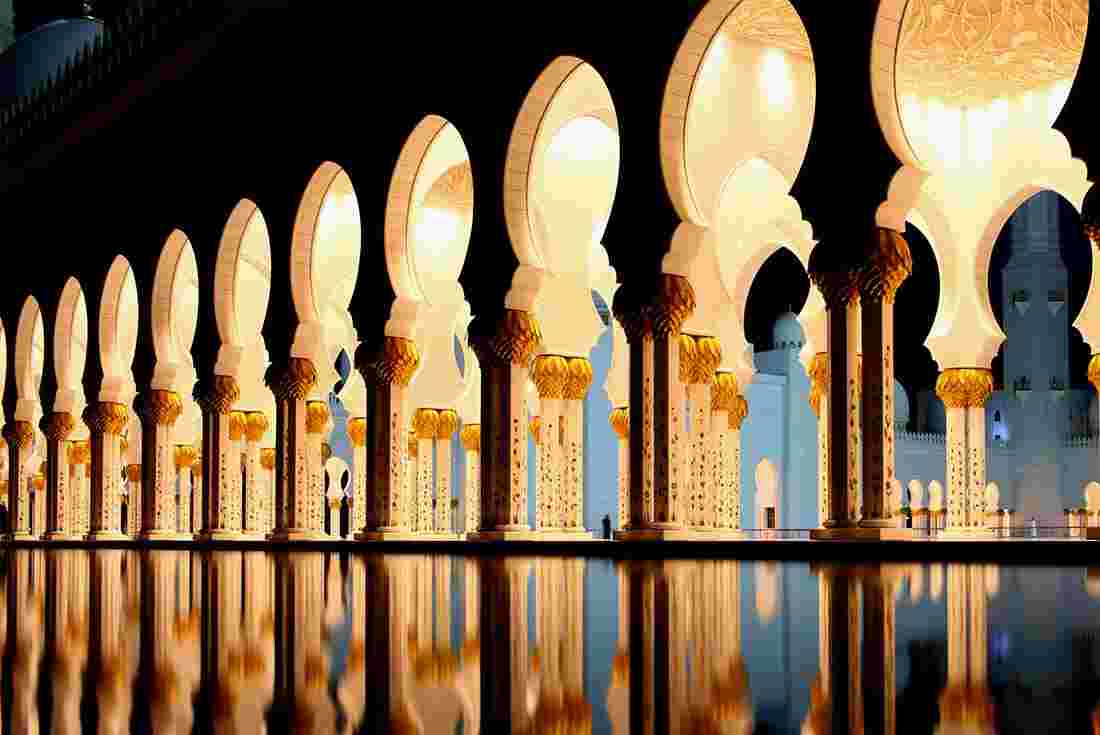 Very few countries have had as dramatic turnabouts in their fortunes as the UAE. Prior to the discovery of the region’s vast petroleum and gas reserves in 1958, the southeastern tip of the Arabian Peninsula was a conglomeration of ‘Trucial States’ heavily dependent on a fated pearling industry and British protection against neighboring powerhouses.

In what was an unusual move given the recent discovery of the 'black gold', 1968 saw Britain decide that the area was no longer worth protecting. The British naval forces withdrew in 1971, and, as Iran and Saudi Arabia quickly started laying claim to Emirati territory, the seven sheikdoms realized they’d stand a better chance by banding together. Abu Dhabi, Ajman, Dubai, Fujairah, Sharjah, Umm al-Quwain (and eventually Ras al-Khaimah) all promptly signed into a union called the United Arab Emirates, electing Sheik Zayed bin Sultan Al Nahyan as president. The federation is governed by hereditary monarchies, and things have been peaceful, and prosperous, ever since. 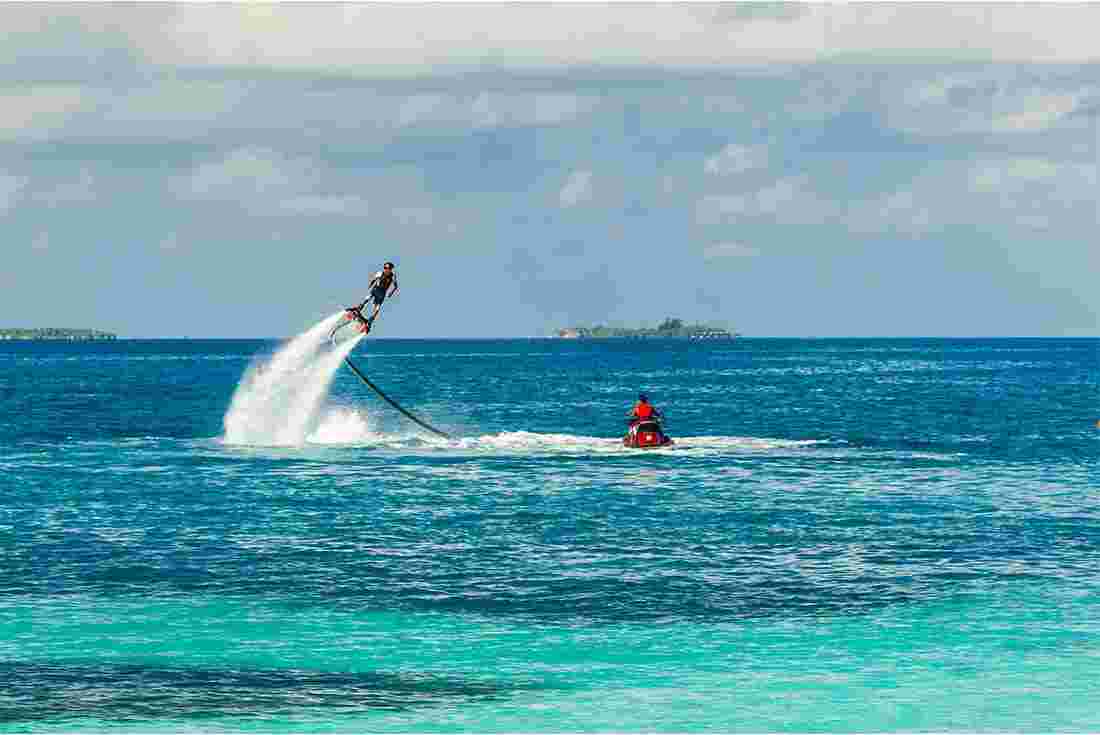 For all its obsession with urbanity, the Emirates is still very much a coastal nation. The country encompasses over 400 miles of coastline; plenty of which is warm waters and white sands shaded by palm trees. Better yet, not far from shore sit an abundance of colourful coral reefs teeming with fish. Head out for a snorkel in Sandy Beach, Fujairah, or delve a little deeper still on a diving expedition.

No, those photos you’ve seen of people being propelled skywards by two jets of water aren’t the work of Photoshop – that’s the work of flyboarding. And the UAE is as good a place to give it a shot as any. Sign up for a session and give flight to those long-suppressed Astro Boy fantasies.

Ok, Whistler it ain’t, but being able to hit the slopes inside a shopping mall – let alone in the Arabian Peninsula – is still an impressive feat. Located in Dubai’s Mall of the Emirates, Ski Dubai is an indoor ski resort that includes runs, jumps, rails, lifts, and the world’s very first black diamond run.

No matter what the temperature’s doing outside, things are always well chilly inside at Dubai’s Chillout lounge. With the cooling system set at minus six degrees, this restaurant/cafe is the place to rug up in thermals and sip a hot chocolate while moaning about the cold.

The swell doesn’t roll in all that often in this corner of the globe, but it is possible to score surf in the UAE. Dubai’s Jumeirah Beach is the best bet, but a far more reliable one is Abu Dhabi’s Wadi Adventure park, where the waves are guaranteed no matter what the conditions are doing. Not only that though

they’ll be whatever type of waves you want. Lefts? Rights? Three foot? Six? Simply rock up at the booth, tell the man at the controls, and the barrels start when you tell them to.

Do I need a COVID-19 vaccine to join a trip in the UAE?

Is tipping customary in the UAE?

Most hotels and restaurants add service charges to their bill. At those that don’t, a tip is always appreciated (particularly by migrant workers).

Internet access – be it at cyber cafes or through Wi-Fi – is readily available throughout the UAE. Websites deemed culturally or religiously offensive are blocked however, as are VoIP telephone systems such as Skype.

Can I use my mobile/cell phone while in the UAE

Yes. Coverage is excellent throughout the UAE and roaming agreements are in place with most international phone carriers.

Public toilets in places frequented by Westerners are generally of the Western-style, sit-down variety. Beyond the cities, squat-style toilets are more common (although these are gradually making way for the Western type).

Can I drink the water in the UAE?

Technically yes, as the tap water is desalinated seawater. People have reported feeling ill from it before however – supposedly because of the hygiene (or lack thereof) of the tank – so filtered water is a safer option.

Are credit cards accepted widely in the UAE?

Yes. All the major cards are widely accepted, though you’ll usually need to pay cash in taxis.

Do I need to purchase travel insurance before traveling in the UAE?

What public holidays are celebrated in the UAE?

Please note these dates are for 2017. For a current list of public holidays in the UAE go to: http://www.worldtravelguide.net/united-arab-emirates/public-holidays 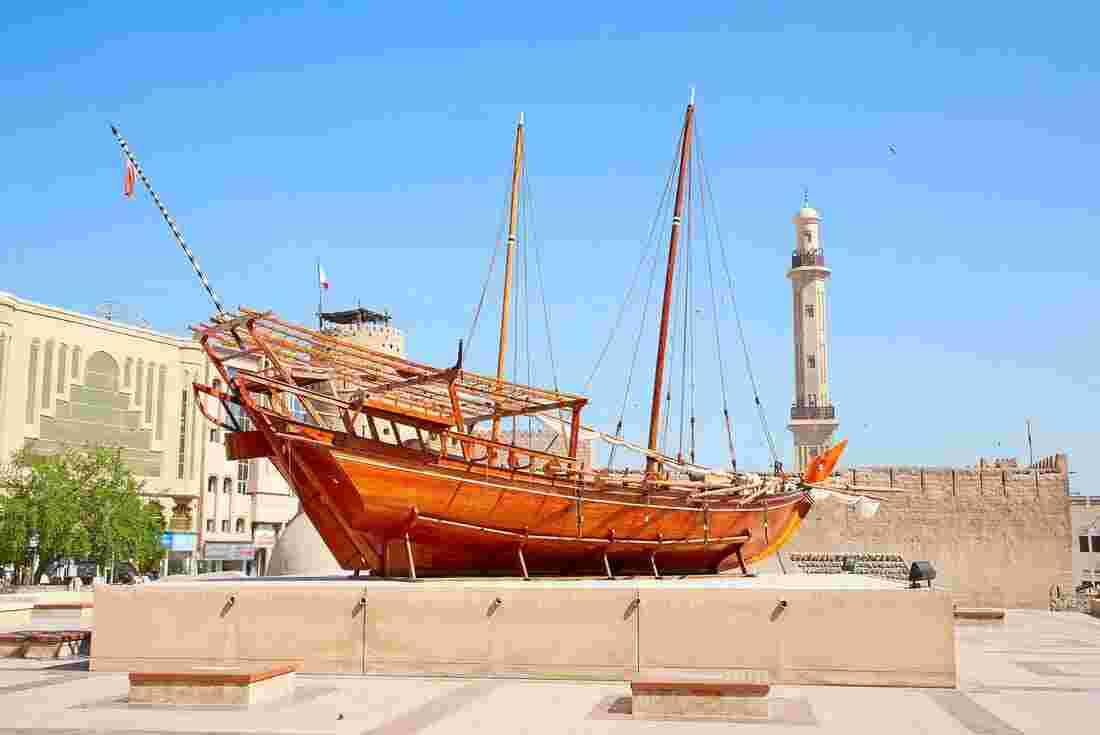 In United Arab Emirates, we stay in locally run accommodation including guesthouses, smaller-scale hotels and homestays in an effort to support the local economies. We also visit locally-run restaurants and markets where travelers will have opportunities to support local businesses and purchase handicrafts created by local artisans.