Home » Czech it: Exploring the creepy side of the Czech Republic
FeaturesGuides 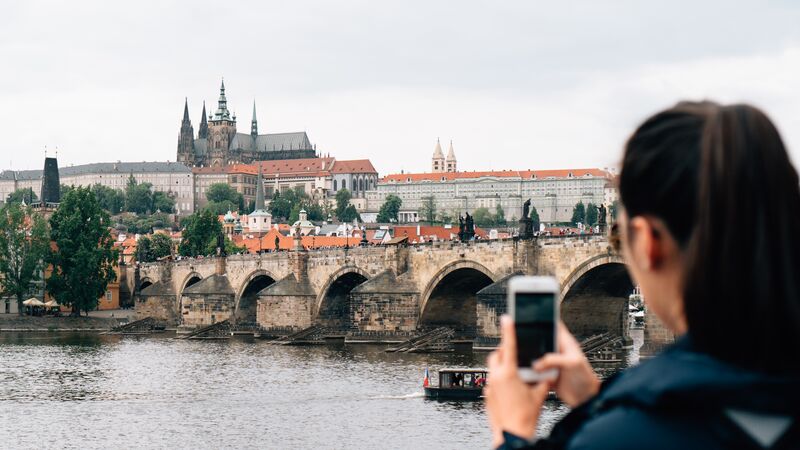 The haunting beauty of the Czech Republic is captured most fittingly in the world’s oldest-operating astronomical clock, down in Prague’s Old Town Square.

Dozens of fingers point up at the clock tower, as words such as ‘skeleton’ and ‘creepy’ pinball between travellers. The black and gold façade houses a golden sun which moves around the zodiac circle, while the moon moves through the displayed Lunar phases at a faster speed (remaining true to the actual moon’s orbit around the earth – the Czechs are a precise bunch!). Every hour, on the hour, Death (represented by a skeleton) yanks a chain and bells echo far beyond the square, and from here the crowds migrate to one of the most photographed constructs in Prague – Charles Bridge, which was built in the 14th century. 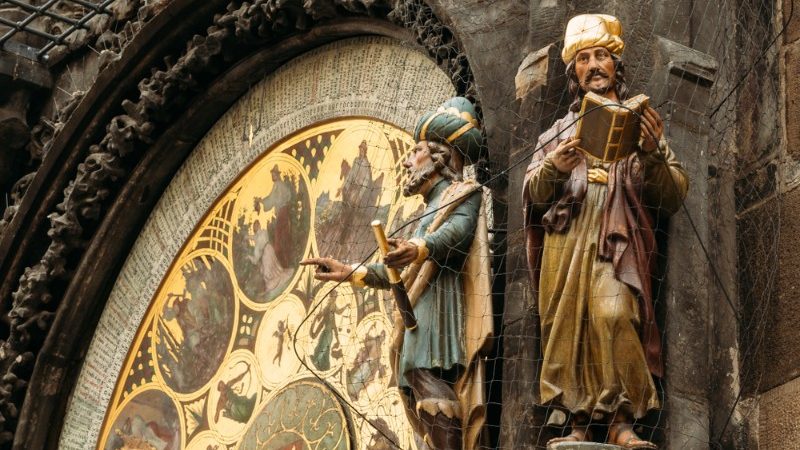 If you’re here during winter, the Christmas markets – which are sizzling with sausages and the sweet aroma of svarak (mulled wine) – are some of the best in Eastern Europe, especially if you’re a lover of all-things meat. The wooden stalls are basic but command long lines for Christmas ham, honey wine, and of course, the famous Czech beer which flows out of taps at what seems like a constant speed. 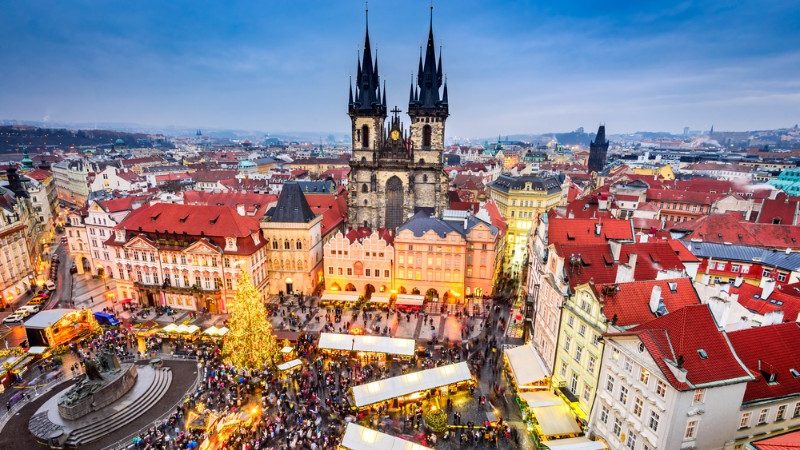 From here, you’re only a few minutes away from Charles Bridge, which is home to bohemian artists selling paintings of Prague, and intriguing statues with a religious twist. The crucified Jesus (Statuary of the Holy Crucifix and Calvary), one of the most interesting of the 30 statues on Charles Bridge, also sees the biggest crowds. The oxidised cross stands out in particular, due to the adorning golden insignia and trimmings, which shimmer in exaggerated fashion thanks to the humble glow of the tar-black gaslights.

RELATED: HOW TO EAT LIKE A LOCAL IN THE CZECH REPUBLIC 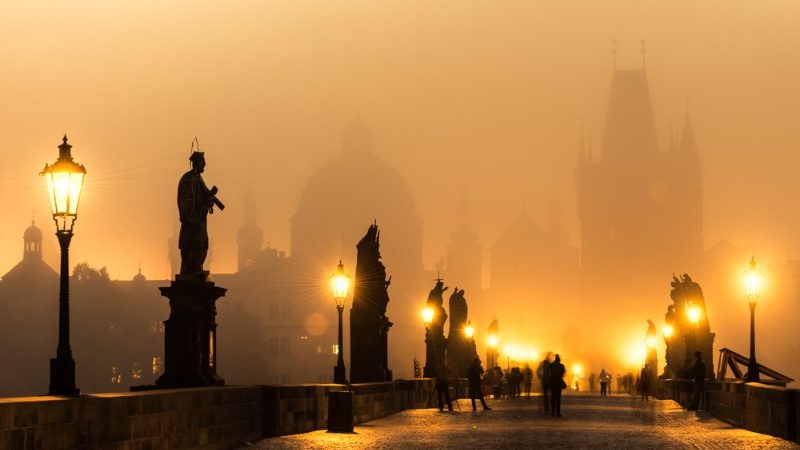 Weird, wacky and Gothic doesn’t stop at chain-yanking skeletons and crucified religious figures in Prague. And after a night on the town in the twisting alleys with a shot or two of absinthe, get up early the next morning and take the train from Depo Hostivař for a journey less than two hours to Kutna Hora, home to Sedlec Ossuary, a small Roman Catholic chapel made of human bones. The surrealism means you won’t totally comprehend what you’re seeing, because it’s so random and unheard of that you’d swear it wasn’t real. But the sight of femur bones wedged in the jaws of skulls, with hip bones serving as candle holders in a chandelier made of bones, is something you won’t see elsewhere in Europe.

Nope, not even the catacombs of Paris. 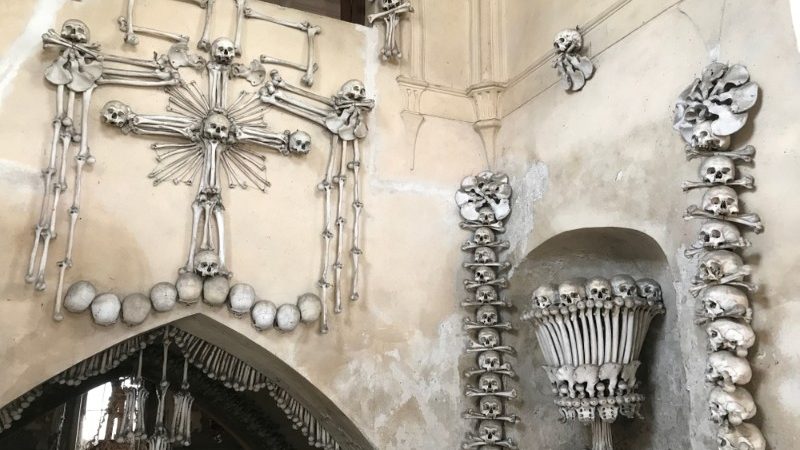 The Sedlec Ossuary was an ancient burial site which became overloaded after the Black Plague; it was constructed as a storage vault (ossuary) for human bones until 1870, when a woodcarver was recruited by an aristocratic family to put the bones into order. The brief likely didn’t entail ‘Make an artistic go of it’ but alas, the woodcarver put his touch on things and it has been standing ever since. It’s one of the most visited sites the Czech Republic.

Not far behind it is the John Lennon Wall, which long before it garnered its name from The Beatles superstar, was known as the Crying Wall – a canvas where anti-communist scribes and artists posted their defiant messages over and over again, despite the authorities painting over it with equal defiance. These scriptures of free-thought under the communist regime led to clashes with police and broad character assassinations of the student movements involved. Ultimately, it became a symbol of freedom, and after Lennon was murdered in 1980, there was such an outpouring of grief scribbled on the wall that it eventually became known by its eponymous title. Today, it’s the only wall in the city where graffiti is legally allowed. 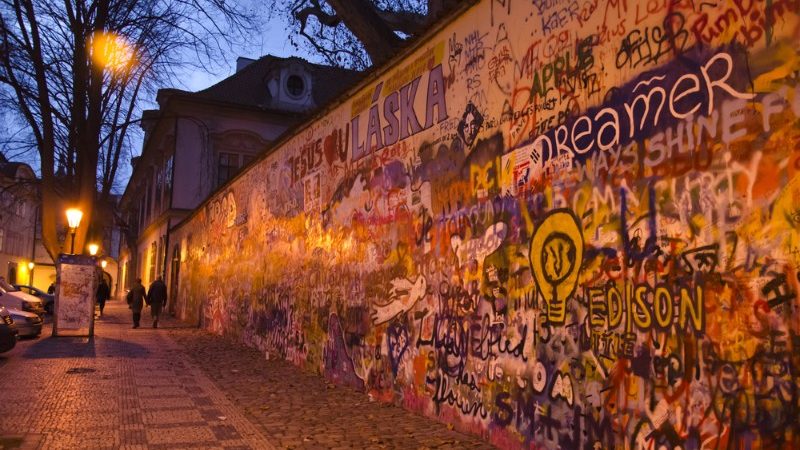 The Czech Republic’s colourful history has something for everyone, even those who adore period pieces set in Medieval times, where knights in shining armour jousted on horseback. There’s a festival for that in June each year, known as the Five-Petalled Rose Celebrations and it takes place in Český Krumlov. Attendees dress up a la Game of Thrones and look every bit the part in their Medieval attire, as hot plates of stodgy stews and large beers get toasted in a frothy mess in what’s a dedicated celebration of a bygone era. The best part? The silly madness means you can really let your hair down and get into character, because literally everyone is doing the same. No weird stares. No questionable remarks. Just good times and plenty of carbs (and headaches the following morning).

RELATED: EVERYTHING YOU NEED TO KNOW ABOUT DRINKING IN THE CZECH REPUBLIC 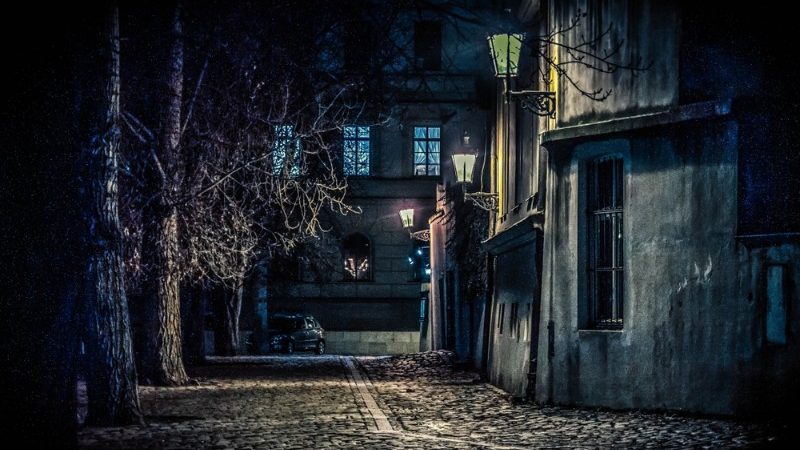 At this rate of discovery, you’ve earned a sleep-in before exploring the coolest corners of this eastern jewel. Come nightfall, the recollections of strange and absurd happenings make a distracted getaway as you watch Prague’s famous nightlife emerge from the darkness. And when it does, every twisting street is stock full of shops selling the green potion made famous by Vincent van Gogh. Did you really think a trip to Prague would be complete without a dance with the Green Fairy?

The Anonymous Bar, named after the global hacktivist group, isn’t just one of the best bars in Prague – it’s one of the coolest, most creative watering holes I’ve been to anywhere on the planet. Invisible ink reveals secret messages beneath UV lights; floppy disks with QR codes allow groups of people to instantly view the menu on their phones; IV drips drop alcohol into mixed drinks; bartenders serve you wearing Anonymous masks, and the black and white minimalist décor with brick feature walls lets you geek-out in that 1995 Hackers fantasy you may or may not have been thinking about all your life. 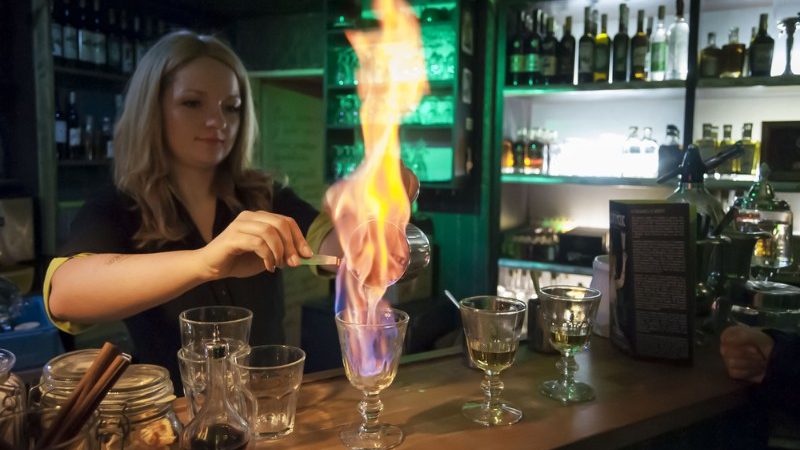 AGED BETWEEN 18 AND 29? JOIN US ON AN EPIC 15-DAY ADVENTURE THROUGH CENTRAL EUROPE

Settle in, order an absinthe, and watch it be prepared by the lighting of sugar cubes which burn, flicker and drip glucose through a special spoon until they splash into the emerald nectar below (a preparation method referred to as “The Czech way”). While no one became a famous surrealist painter in their inebriated haze while I was there, I’m happy to report that nobody chopped their ear off either, and that silver lining only shone brighter as the night wore on. We rolled up our sleeves for a fine scotch at the Hemingway Bar (named after the literary heavyweight), before getting our fancy-on at Black Angel’s Bar, an American Prohibition-themed bar in the Old Town Square. 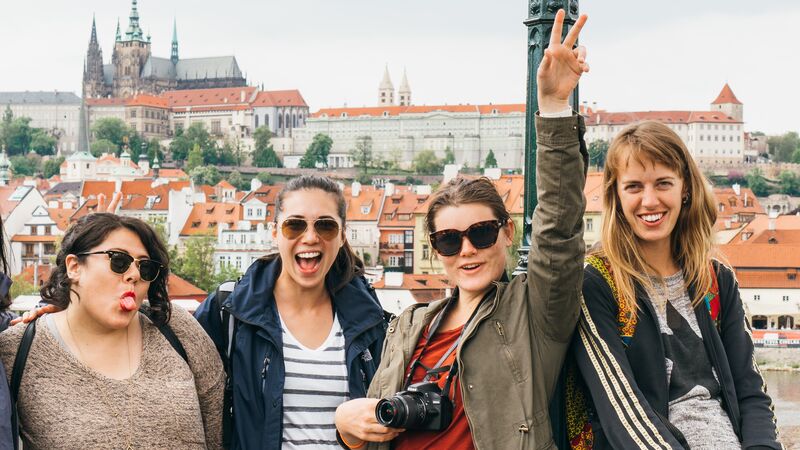 En route to meet the Green Fairy. Photo by The Common Wanderer.

Follow these milestones through the Halloween city and you’re sure to have a riot of a night. And if you want to cap off your trip in inspired fashion, head to the Apple Museum, which features a pop-art inspired Steve Jobs stencil, plus a chronological timeline of the tech giant’s ground-breaking innovations.

The Czech Republic should be your first port of call on any journey to Central Europe. It has a remarkable culture rippling with hipster attitude and a free-spirited rebellion, and put quite simply: no trip to Europe is quite the same without it.

Check out the Czech Republic on a small group adventure with Intrepid now. Explore our full range of tours here. 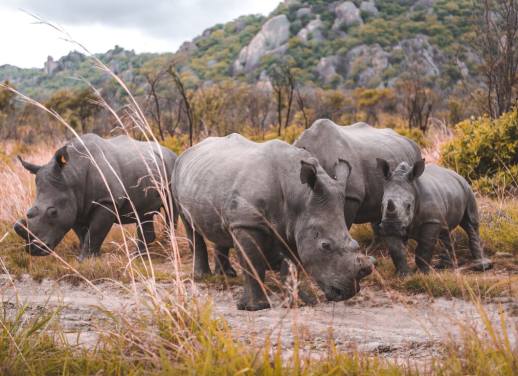 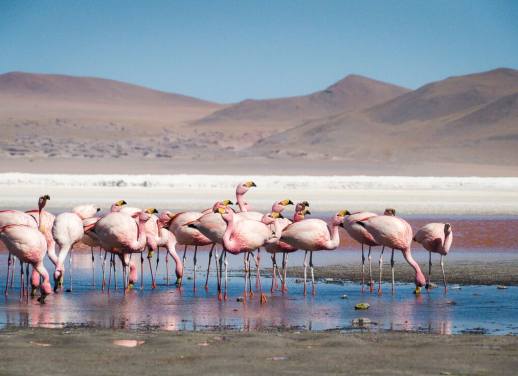 I stayed in Prague for one year and love the city. I explored most of the touristic sites and lots of gems knows to locals. I tried hundrets of beers from local breweries and keep coming back!