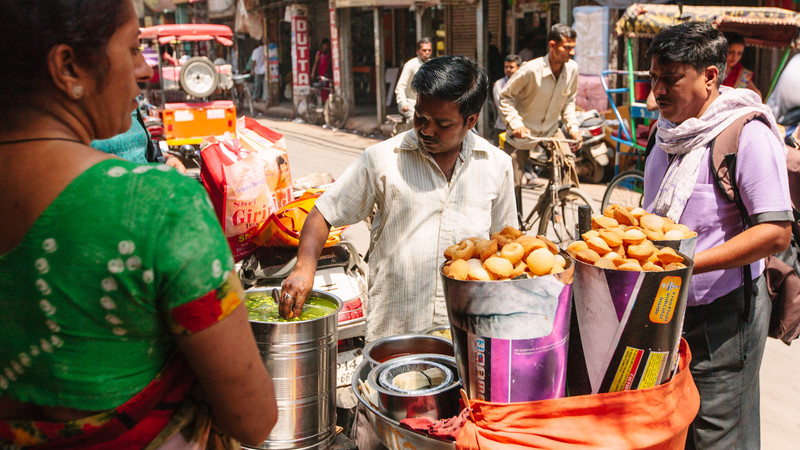 When you think of the best cuisine in the world, what comes to mind? For me, it’s a hands-down no-brainer: Indian.

How can you not want to grab a piece of golden, garlicky naan and dig into a freshly-made, richly-spiced, mind-blowingly tasty curry? Prepare for a smell and taste overload – but hey, that’s what it’s all about. Eating Indian food is like a high for your taste buds, one that will take you drooling across the subcontinent wanting more and more.

After all, India is home to a wealth of food diversity, delicacies, and innovations. This list is only like an ice cube on the tip of a very, very large food iceberg. But it’s a good place to start. Here are seven dishes you’ll want to dive straight into. Because behold, some of the best food in India is here: 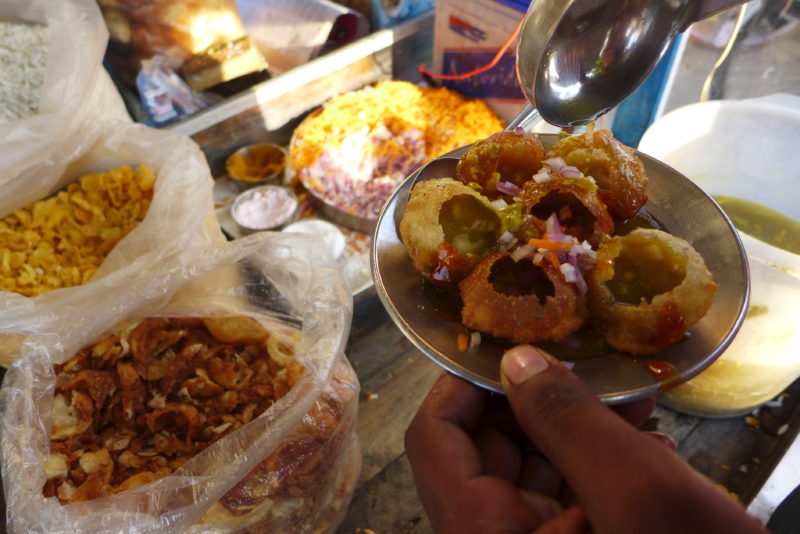 Chaats are sweet or savory snacks typically served at roadside stalls in India. Chaats are the best. Pani Puri is one of the most famous street snacks found throughout India. The one pictured above can be slurped up from food vendors on Marina beach, Chennai.

Pani means water, which is mint and/or tamarind flavored, which is poured into the puri, which are thin, crispy puff balls – voila: pani puri. The filling is made from mashed chickpeas, potatoes, a variety of spices, onion, and more depending on the region. Sweet, sour, spicy, tangy, irresistible, the whole shebang. The tanginess comes from the oh-so-flavorful tamarind. For only a few rupees each, it’s not so hard to chow down on a quite a few of these. 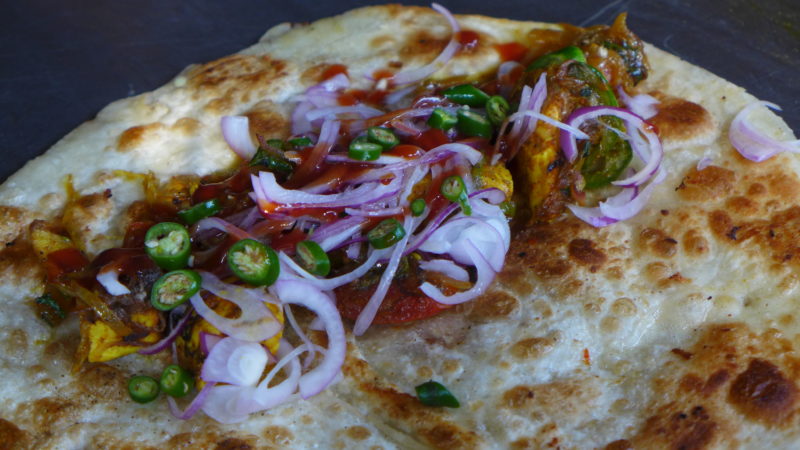 Originating in Kolkata, this street-food miracle is found all over the city. It’s kind of like the Indian version of a donair, wrap, or the like. A typical kati involves frying an egg, setting the paratha (flatbread) on top, then adding marinated skewered meat, often chicken, and topping it off with onions, chilies, a squirt of lime, and a couple of sauces.

The one pictured above uses paneer, a common filling instead of meat, which was marinated in a variety of vegetables and spices. This saucy spice-fest of a dish just might blow your mind. 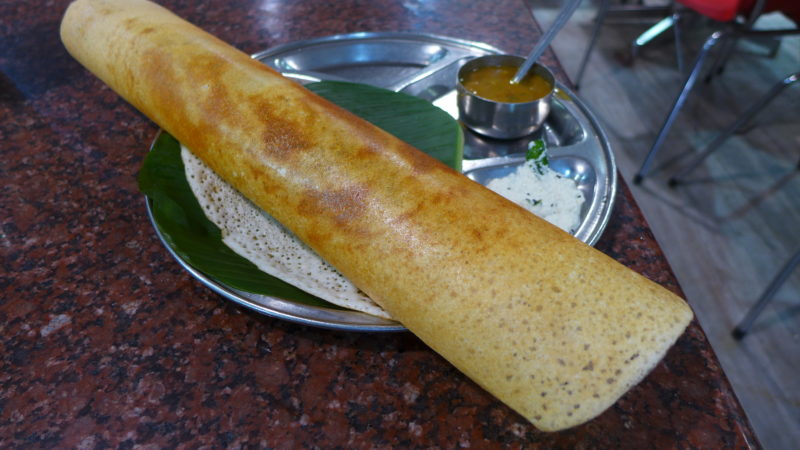 No trip to India is complete without eating a masala dosa. Found more commonly throughout South India, masala dosas are a great way to start off your day. Try it in Kerala or Tamil Nadu. Like many Indian dishes, the experience isn’t just about eating the delicious concoction, it’s about watching it be made – and the making of dosas are no exception.

Dosa is a very thin pancake or crepe made from fermented rice and black lentils (so much better than it sounds!). A filling, the masala, of fried potato, mustard seeds, and other spices is added to the middle of the dosa, which is then rolled up into perfection. The masterpiece is commonly served with two, sometimes more, sauces and chutneys. Sambar is like a spicy vegetable and lentil stew that pairs perfectly with the dosa. Coconut chutney, which will rock your world, is a must when eating dosas. Have fun and use your hands. 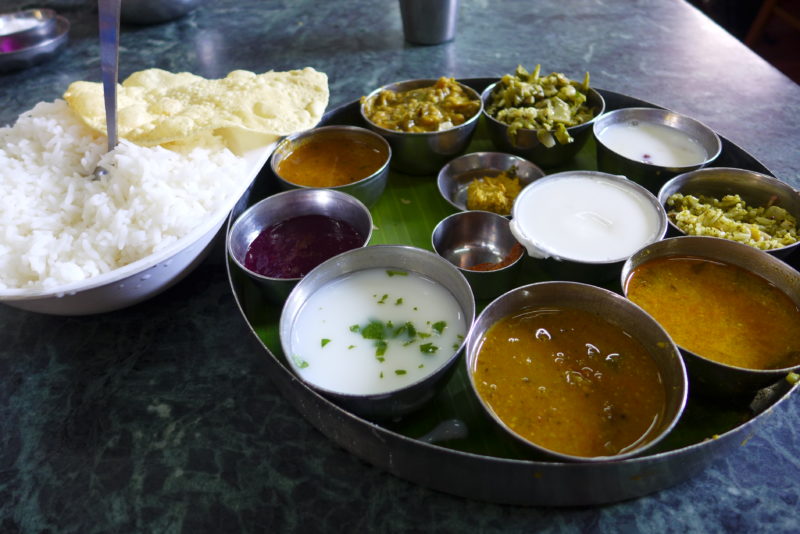 Not one dish, but a spread of many. A thaili, or set meal, is a platter of different Indian dishes, ranging from as few as six, to as many as 20, often indulging rice, papadum, curd, chapati, dal, other veg curries, sambar, pickle, dessert, and a lot of brilliance in between. Dal, bread, rice, and some other dishes are often refillable, so thalis are a good bet when you’re hungry. Plus, they’re amazing. Plus, they’re often only $1.00.

Each and every restaurant serves up a different thali – some are only fair, but, surely, you’ll come across a thali that, just by looking at it, will basically be life-changing. Apparently, the idea behind a thali is that it should encompass six different flavors: sweet, salty, bitter, sour, astringent, spicy.

Remember to eat with your hands, but with only your right hand. Make sure to try thalis in both the north and south so you can see and taste the diversity, which varies. Choose from meat-based or veg. Both are otherworldly. 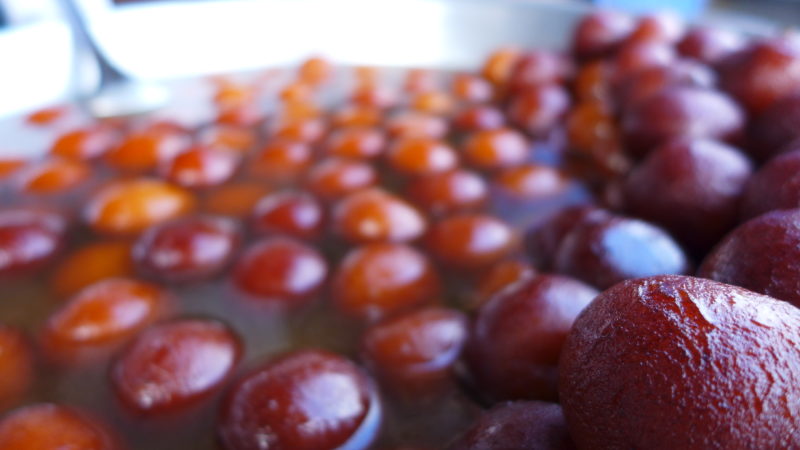 Let’s sweeten things up a bit. India is a country known for its sweets. Around every corner, almost literally in some cities, is a sweet shop. Many of India’s sweets are made from milk but Gulab Jamun is ubiquitous, and tops the list for being one of the most popular sweets in India.

Made from milk solids, these solids are kneaded into a dough, which is then rolled up into balls and deep fried. These brown, spongy milk-dough balls are then covered and soaked in a sugary syrup, which is often flavored with saffron, cardamom, or rose water.

INDIA IS ONE OF THE BEST DESTINATIONS FOR VEGETARIAN TRAVELLERS; READ THE REST HERE 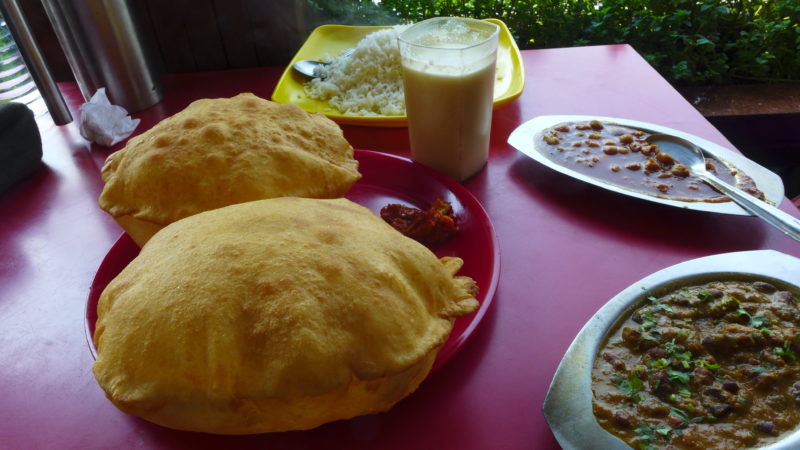 Similar to chana masala (spiced chickpea curry), but chole bhature makes you wonder what life was like prior to eating this melt-in-your-mouth dish. The dish, most popular in the Punjab region, but found throughout India, can be eaten as a snack, or, if you’re like me, as a meal – just double down. Chole is the richly spiced chickpea curry, and bhature is the deep fried bread. Bhature, when fried, fills with hot air and becomes a balloon-like ball of bread. The two are a combo made in foodie heaven. And the dish is often served with lime wedges, onion slices, and green chilies.

One of the best places in India to have chole is at Sita Ram Diwan Chand in New Delhi – they only serve chole, and have been doing so for a long time.

6 foods that prove Indian cuisine is the best in the world was last modified: September 23rd, 2020 by Evan Ceretti
AsiaFoodIndiareal food adventure 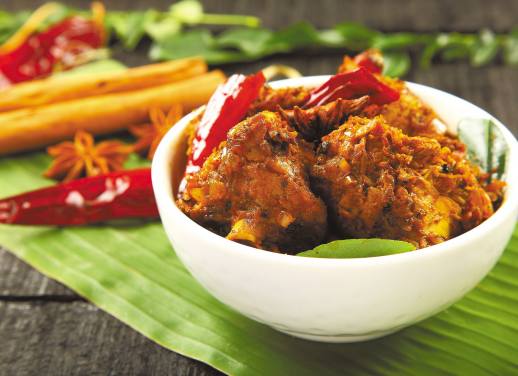 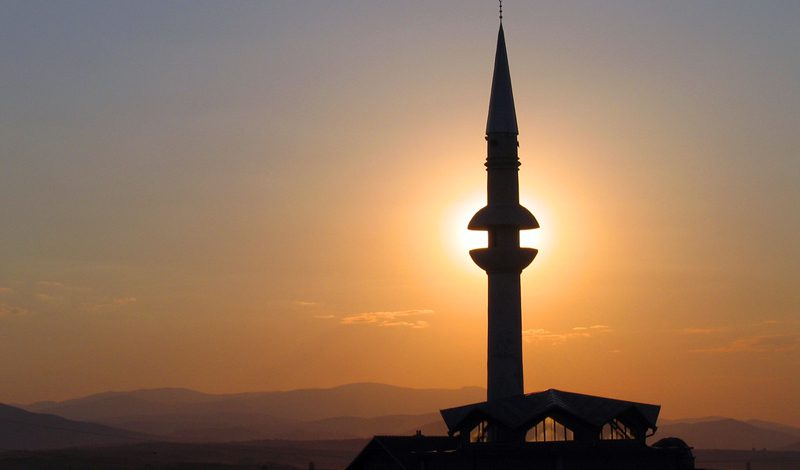 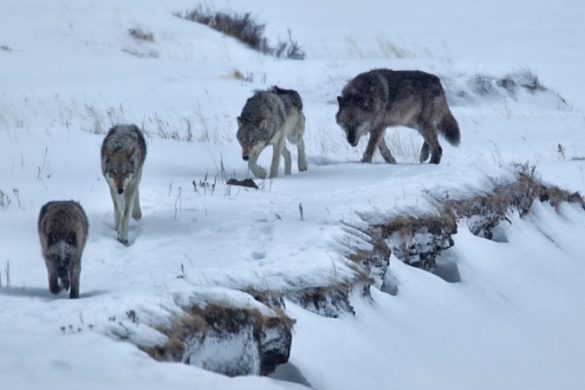 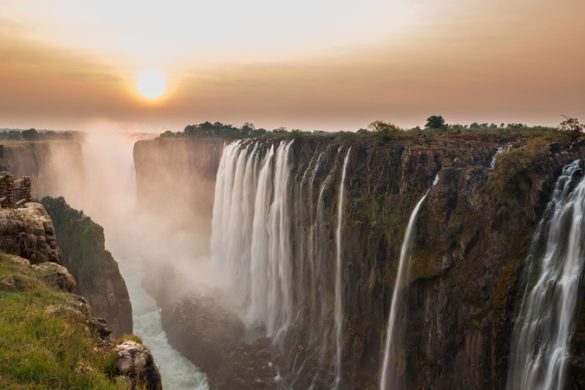 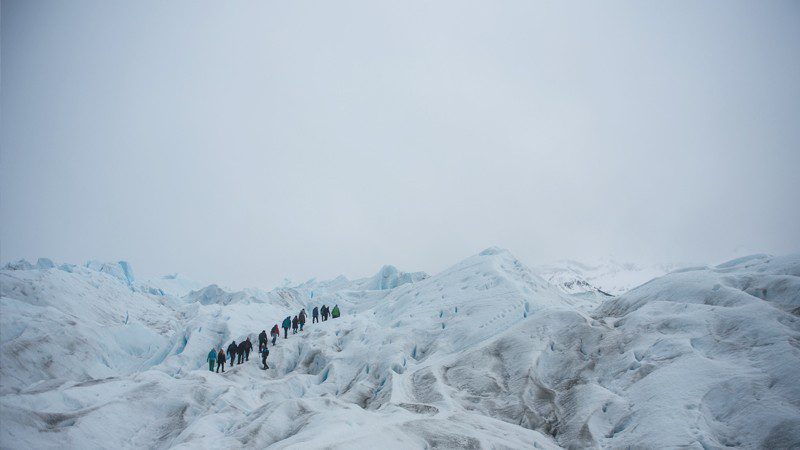 You should go to Patagonia if you want to feel small 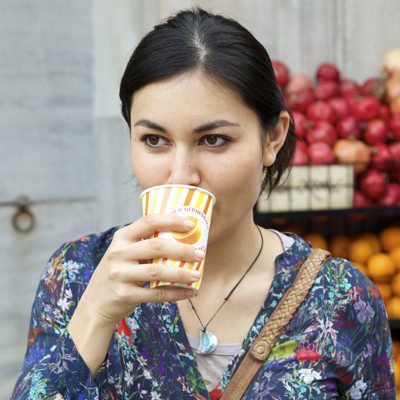 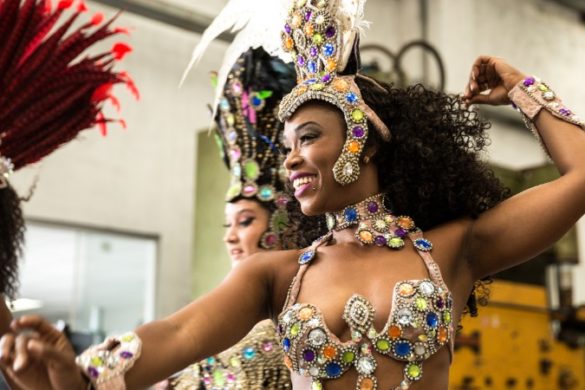 Which style of Latin dance suits you?

Embrace the unexpected: what my trip to India taught me about life

It’s good to know from this article that India is known for its sweet dishes. My boyfriend has a sweet tooth and has a palate for foreign food so this article just gave me an idea of what should I do for our anniversary. It might be a good idea to look for Indian restaurants around us so we can try their cuisine.

Such A Great Blog. Thank U For Sharing Useful Information About Indian food. This Article Really Amzing And So Much Helpful For Me. Keep It Up:).

This was really a nice article Yes Indian food is best in the world .

Really Indian food is the best.

I love masala dosa! Seeing this takes me back to being there.

Indian street foods are heaven foe foodies. The colors, the spices, the aroma, mmmm…you just cant resist it…I would like to share another list of Indian street foods that you must taste…http://readaddict.in/13-heavenly-delicious-street-foods-in-india/

You really made me hungry.Indian food is the best in the whole wide world. Lucky for me I had a packet of Swad’s Bhinda Masala in the house that stifled my lust.