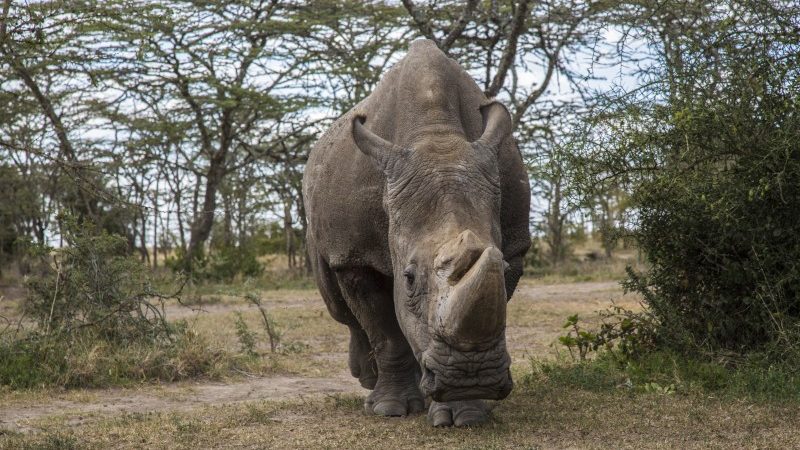 The not-for-profit conservancy told followers on Twitter that Sudan was being treated for age-related complications that led to degenerative changes in his muscles and bones, as well as extensive skin wounds. Over a 24-hour period, his condition significantly worsened – Sudan was suffering greatly, and was unable to stand. The veterinary team from Dvůr Králové Zoo, Ol Pejeta and Kenya Wildlife Service made the sad decision to euthanise him on Monday afternoon (local time).

Sudan, known as ‘the gentle giant’ to conservancy staff and visitors (and famous for his Tinder profile, created last year to help fund the development of IVF programs for rhinos), was one of only three remaining northern white rhinoceroses. He was rescued from the wild in the mid-1970s and moved to the Dvůr Králové Zoo, where he fathered two daughters. In 2009, Sudan moved to Ol Pejeta to take part in a breeding program – along with another white male (now also deceased) and two females – however retired from his role as a potential mate after no successful pregnancies. His DNA was collected on Monday before he was put to sleep to be used for future conservation efforts.

In a tribute to Sudan, Ol Pejeta’s CEO Richard Vigne described the rhino as “a great ambassador for his species [who] will be remembered for the work he did to raise awareness globally of the plight facing not only rhinos, but also the many thousands of other species facing extinction as a result of unsustainable human activity.” 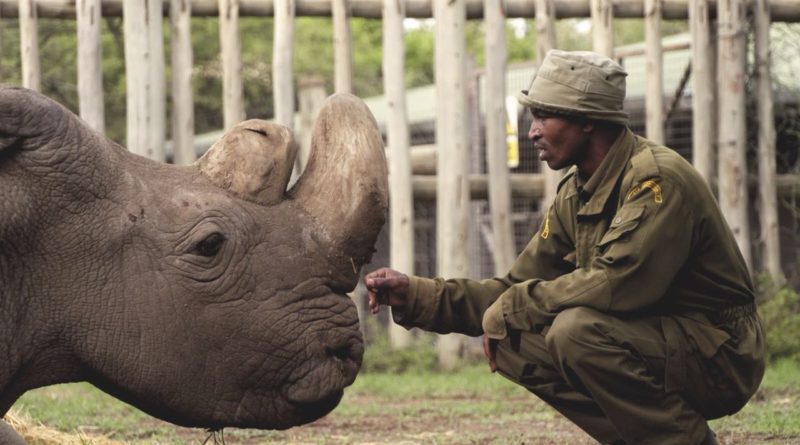 Sudan with his keeper. Image via Ol Pejeta Conservancy Facebook.

The northern white rhino population was almost entirely wiped out during the poaching crisis of the 1970s and 1980s throughout Uganda, Central African Republic, Sudan and Chad, fuelled by a demand for rhino horn to use in traditional Chinese medicine, and as dagger handles in Yemen. In 2008, the northern white rhino was considered extinct in the wild.

“Sudan was the last northern white rhino that was born in the wild,” said Jan Stejskal, Director of International Projects at Dvůr Králové Zoo. “His death is a cruel symbol of human disregard for nature and it saddened everyone who knew him. But we should not give up. We must take advantage of the unique situation in which cellular technologies are utilized for conservation of critically endangered species. It may sound unbelievable, but thanks to the newly developed techniques even Sudan could still have an offspring.”

Following the incredible work of Ol Pejeta (and the Ziwa Rhino Sanctuary in Uganda) in protecting and attempting to conserve rhino numbers, Intrepid recently launched an expedition to visit these sanctuaries. This offers a small number of travellers a truly unique opportunity to see these creatures before extinction, meet their keepers, and hear their stories. The staff at Ol Pejeta and Ziwa have spent the majority of their lives protecting rhinos, and it’s a truly remarkable bond to witness.

So much has been said about whether wildlife tourism can actually help conserve endangered species. We believe it can, but only if it’s done responsibly. Wild animals, particularly those that are endangered, are far more valuable alive than dead, especially when tourism provides added economic benefits. Responsible wildlife tourism contributes to protecting conservation areas, training and employing rangers, and supports work with local communities living side by side with wildlife to stop human wildlife conflict, all of which helps stop poaching.  You can go rhino tracking on foot in Uganda, where part of your tour cost goes towards employing rangers who provide 24/7 surveillance for the only rhinos found in the country. Similarly, gorilla tracking in Rwanda and Uganda is helping to preserve their diminishing natural habitat, all while ensuring visitor numbers are strictly monitored.

Since 2002, Intrepid Travel has invested over $950K AUD into animal welfare and conservation projects around the world through our not-for-profit, The Intrepid Foundation. All donations to The Intrepid Foundation are matched dollar for dollar, and your entire contribution goes directly to your chosen project. As a partner to the East Africa Wildlife Society, The Intrepid Foundation directly supports anti-poaching programs that protect wildlife in the Maasai Mara ecosystem, aiming to ensure no other species has to suffer the same fate as the northern white rhinos.

To find out more about the East Africa Wildlife Society, or to support other conservation and animal welfare projects, visit The Intrepid Foundation now.

Feature image by INTERTOURIST, via Shutterstock.

5 fantastic cultural experiences you can have in...

Round up the troops: 5 experiences in the...

8 reasons you should book a small group...