There’s a part of Brazil that is mostly void of international tourists. It’s a little harder to get to, it’s more remote than iconic Brazil and English is not widely spoken. But it’s worth the effort because you’ll be blown away by its natural beauty, fascinating history and energetic locals.

I’m talking about Northern Brazil and it’s a hidden gem you need to get to.

The area was a photographer’s dream. With brightly painted buildings that are hundreds of years old, no saturation is required for any photo taken in Salvador. And an old mining town called Lencóis has a similar feel but the streets are quieter and more peaceful and the locals are laidback.

If it’s expansive landscapes you’re after then Chapada Diamantina National Park has got you covered. You can practise your steady hand on a slow shutter speed on the many waterfalls in the region, get your wide angle lens out for the impressive lookouts and just bask in the greenery.

For beach life, head to isolated Jericoacoara. You’ll have to ride an hour through sand dunes before you see a little oasis town on the horizon. It’s said that Jeri has some of the best sunsets in all of Brazil and I think that could be true.

So, armed with my camera on Intrepid’s new Northern Brazil trip, I got snap happy and here are the results. 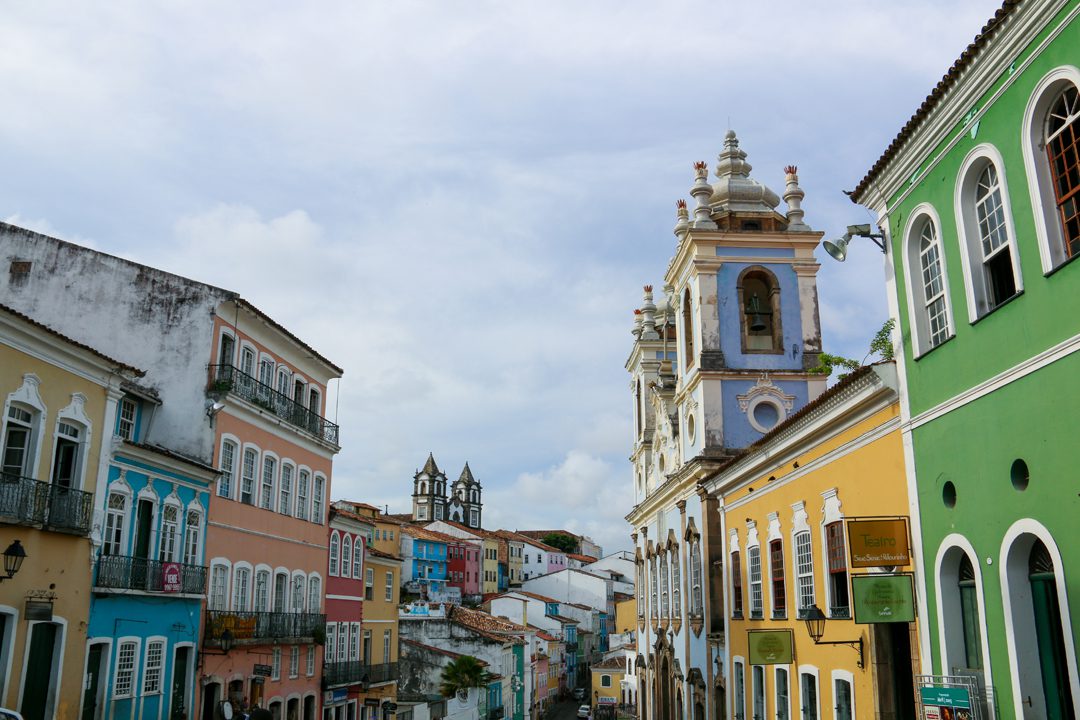 Founded in the 16th Century, Salvador was Brazil’s first capital and it’s known as the happiest place in Brazil. It’s not hard to see why! With so many colours on its old buildings it’s impossible not to feel euphoric. This was one of the streets leading up to the main square in Pelourinho, the historic old town – a UNESCO World Heritage Listed site.

I was walking around the cobbled streets of Salvador’s old town and when I turned a corner I caught this scene. Earlier that morning the city received a torrential downpour with thunder so loud it literally scared me, so I suspect this lady made a nice little profit selling her bright umbrellas. 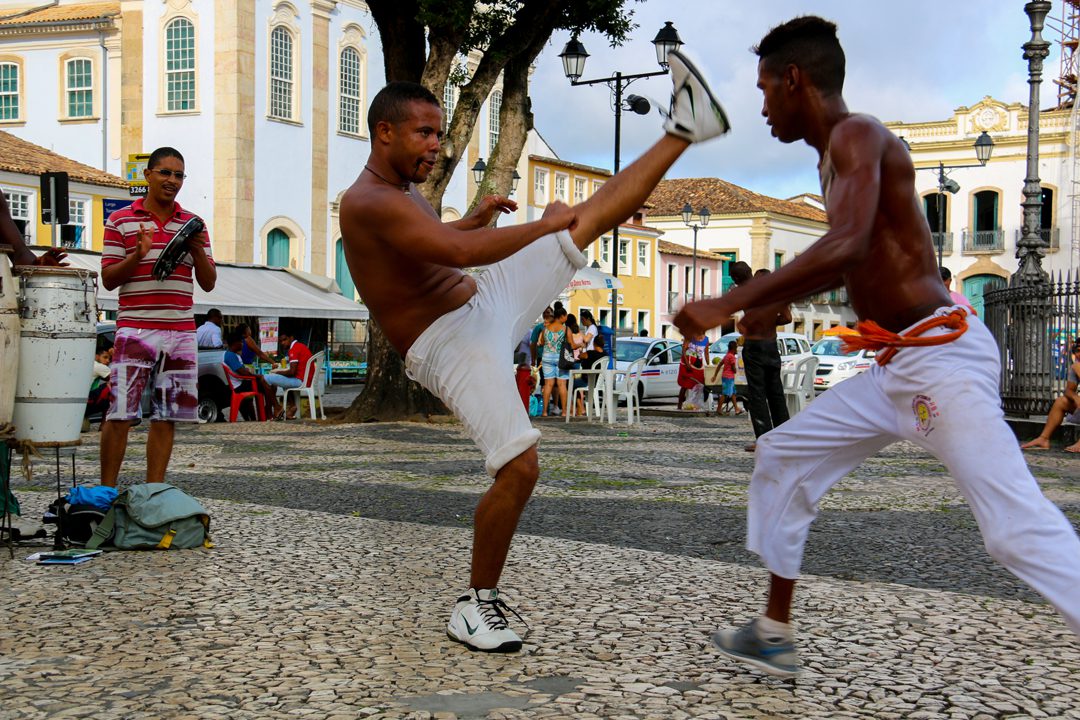 Capoeira is hugely popular in Brazil. It sort of looks like a cross between dancing and martial arts, which two people perform against the beat of traditional Brazilian music. It’s quiet mesmerising to watch and not uncommon to see performances in popular squares, such as this one in Salvador. 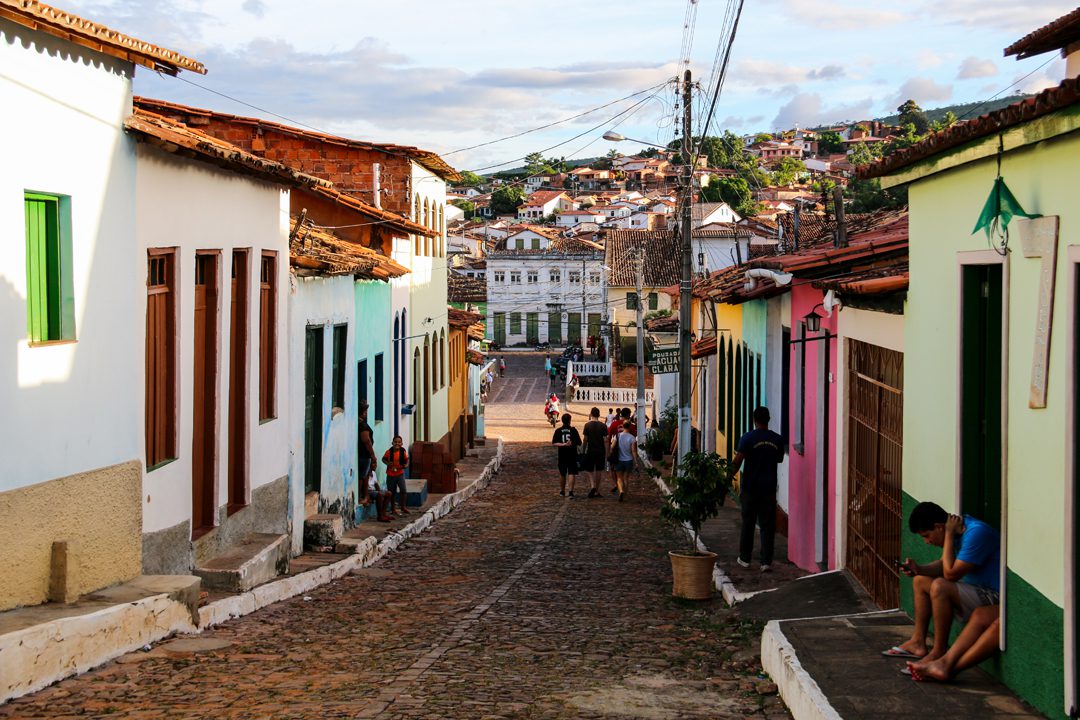 This is a typical street in Lencóis, our base within Chapada Diamantina National Park, which is about a 6 hour bus ride from Salvador. Chapada means steep cliffs and diamantina means diamond, many of which were found there in the mid-19th century. So it developed into quite a wealthy little town and now has a charming, colonial style feel that boasts a lot of colour. 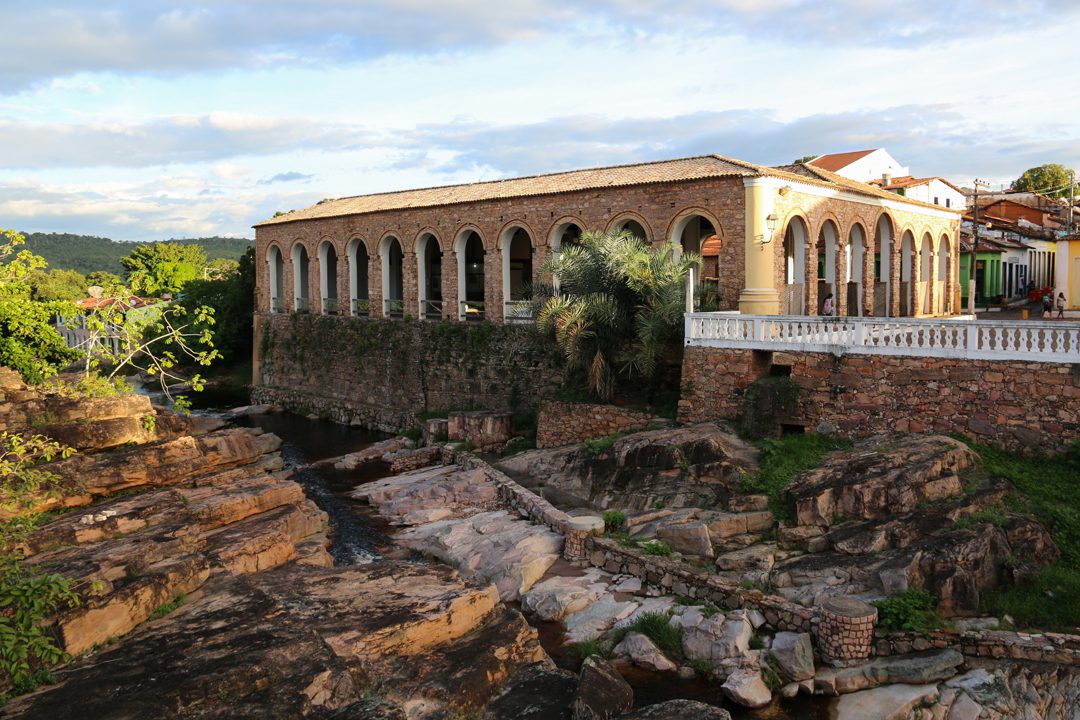 Lencóis was so beautiful. This was taken as the sun was setting so the light that fell on this building was perfect. The river rolled through the town and that building seemed to be a bit of a social hub – one night we stumbling on a Capoeira school entertaining the locals. 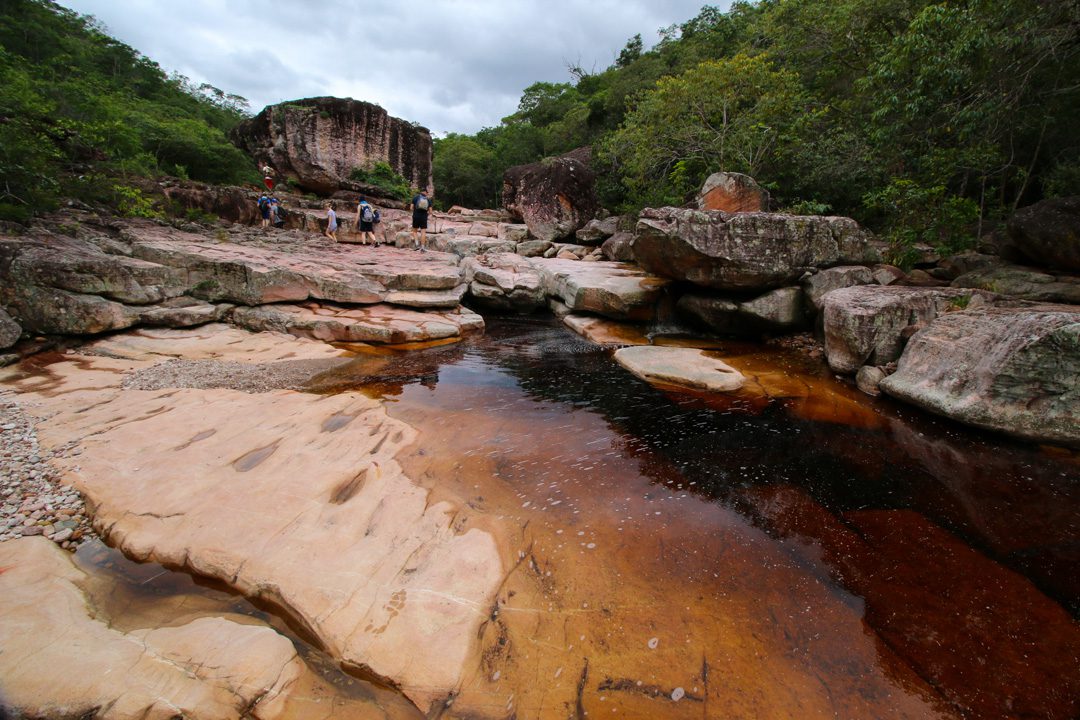 We did a full day hike through Chapada Diamantina National Park and came across caves, rivers, waterfalls and stunning lookouts. It was all very beautiful. This was taken just after we all went for a swim in the river and really captures the landscape we encountered on our hike. 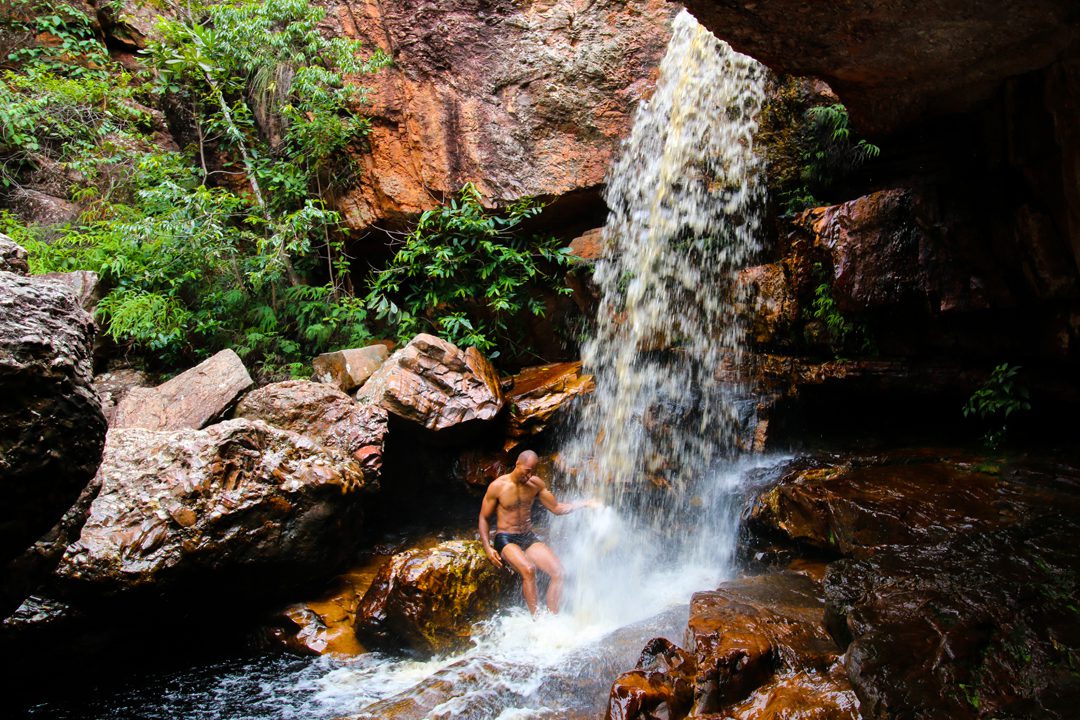 “Trust me, this is the best natural massage you’ll ever have!” Our local guide in Chapada Diamantina wasted no time in stripping down and jumping under this waterfall. It was hammering down and we were all taken by surprise. But eventually everyone worked up the courage to get a pummelling on our backs! 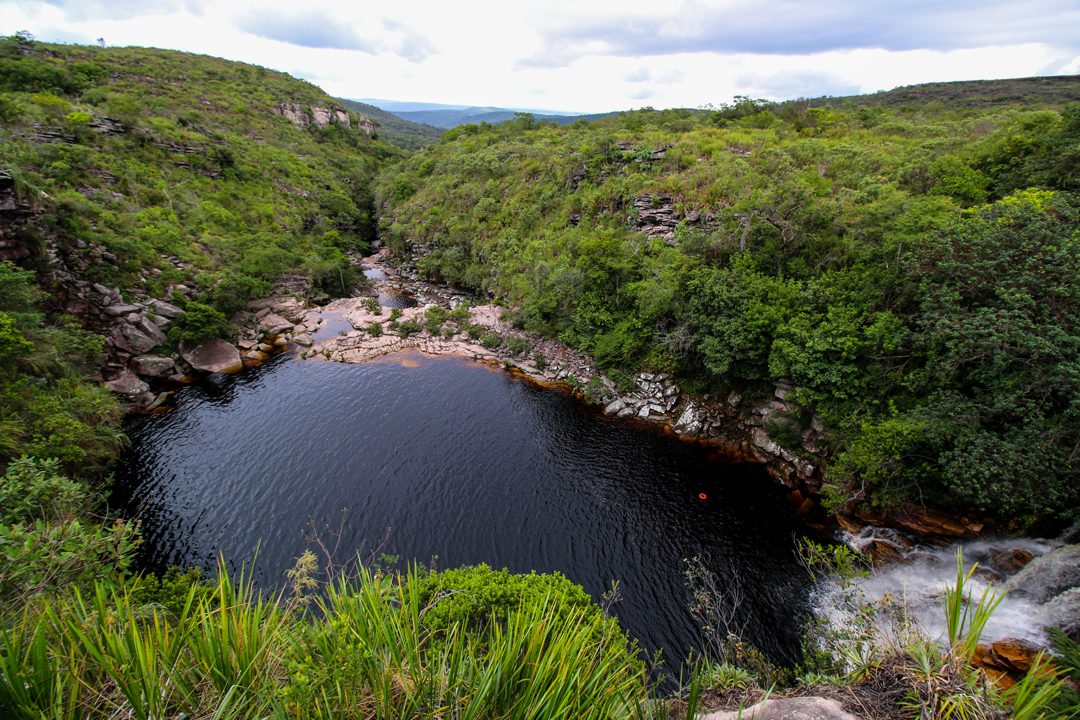 We went swimming in here and it was bliss. Definitely the best natural pool I’ve ever had the pleasure of swimming in. To the right is the Poço do Diabo waterfall, where you can swim directly underneath. 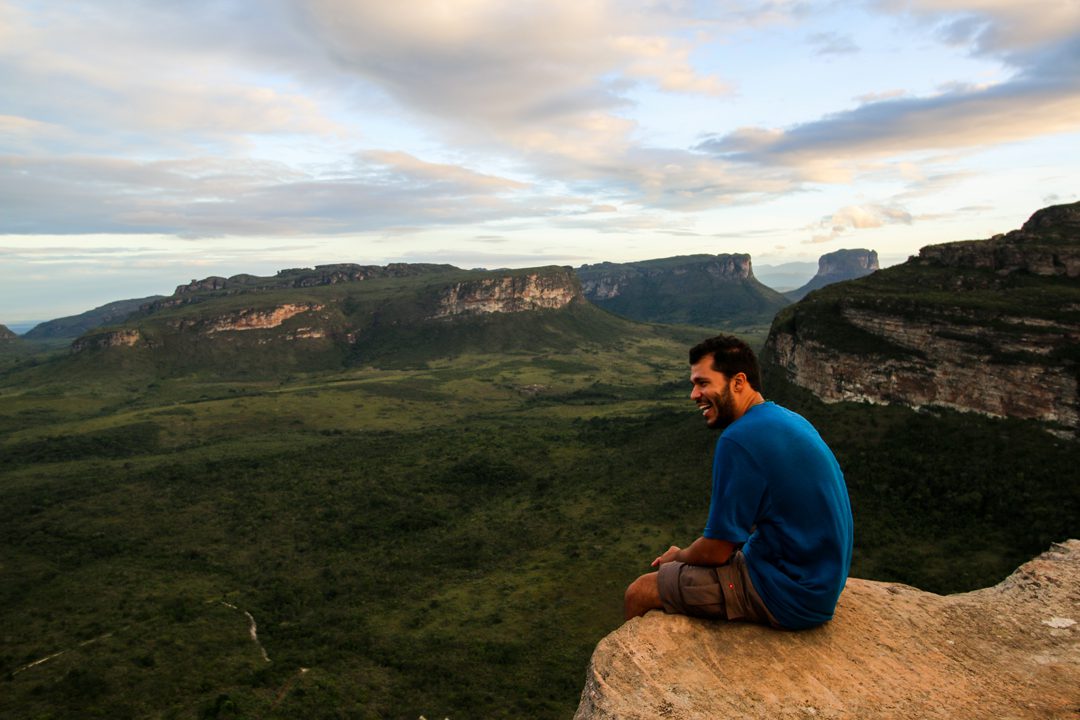 The grand finale to our Chapada Diamantina experience was sunset from the top of Pai Inácio Hill. This is Pedro, our Intrepid leader, who is enjoying the fine view featuring those iconic steep cliffs that Chapada is known for.

Life’s a beach (or more specifically, a lagoon) 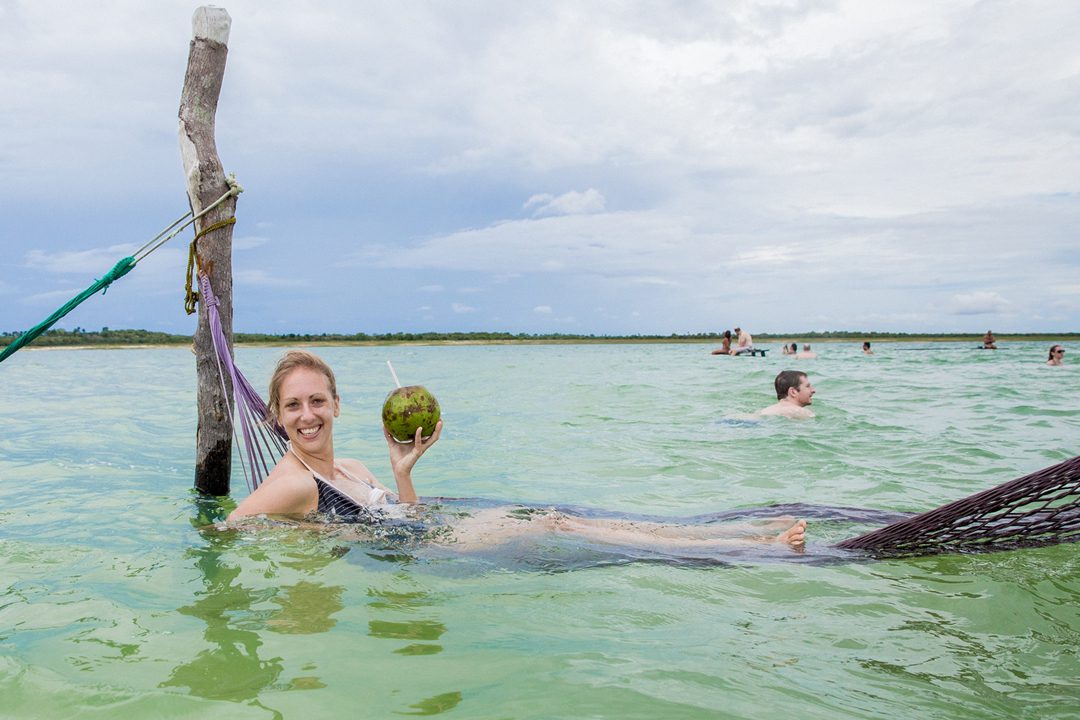 OK, so I didn’t actually take this photo (our talented photographer Lucy Piper did) but it represents Jericoacoara so well! The sleepy town is surrounded by sand dunes and deep within these is a lagoon they call ‘Lagoa Paraiso’ – no prizes for guessing what that means. The trip hit its peak as soon as I got into that hammock with coconut in hand. 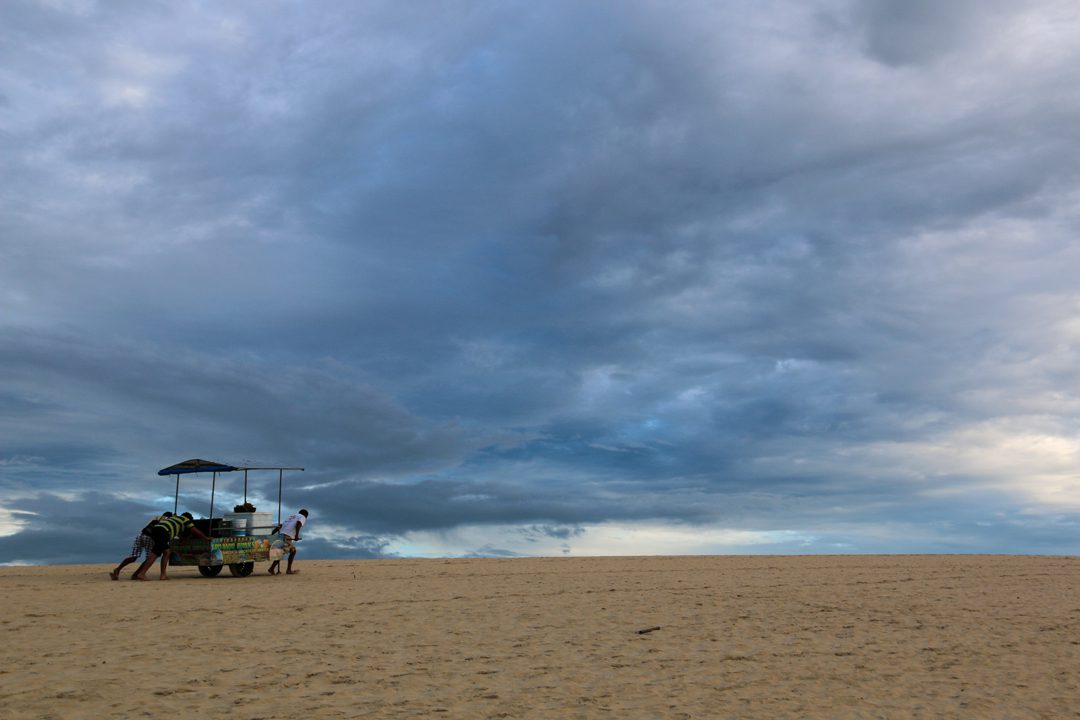 This was taken half way up the Pôr do Sol sand dune just before sunset. These guys are hauling a cocktail cart up the sand dune, because what’s a sunset without a cocktail in hand?! We had some pretty moody weather in Jericoacoara, but it made for some dramatic photos. 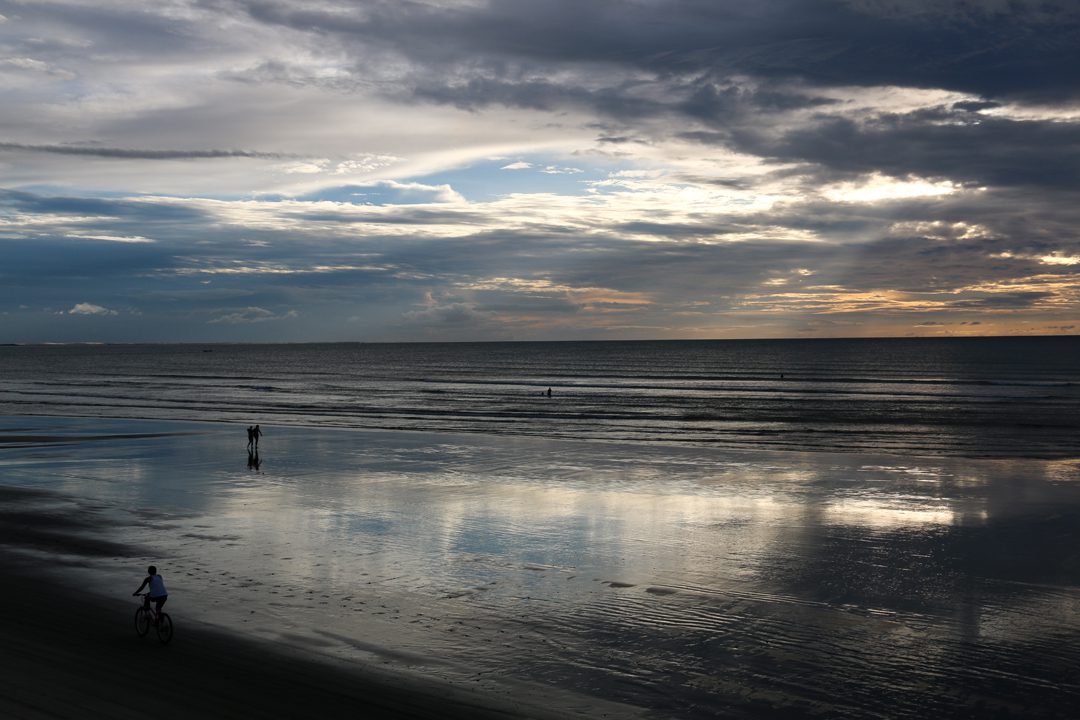 And this is the sunset we saw from the top of the sand dune. The main beach at Jeri is not the best swimming beach as the waters are very shallow. But at sunrise and sunset when the sun glistens on the water it has the effect of a mirror and it’s just simply beautiful.

Inspired? Of course you are. Check out Northern Brazil with Intrepid Travel. 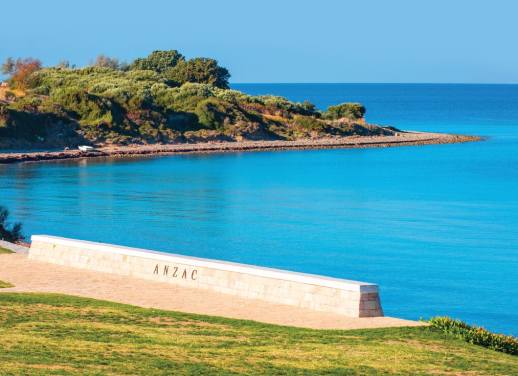 Randy has a point, Amanda! Your photos are great and the text is good, but this is not Northen Brazil, but Northeastern! Best regards from Southeastern Brazil.

Not to take away from the lovely photos, but Brazilians always refer to it as the Northeast.