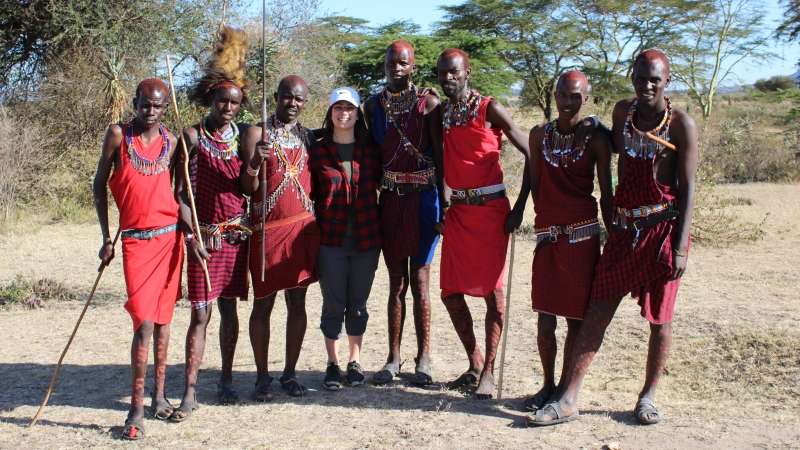 “Do you think they eat watermelon?” My group was chowing down on a snack after a bumpy drive to Loita Hills while we awaited our hosts, the Maasai people, to show us to their village.

On the drive there, our local leader, Julius, told us that the Maasai mostly subsisted off of their cattle and their cattle alone (the milk, meat and blood are what make up the traditional Maasai diet), so we had no idea if watermelon would be appetizing to them.

Spoiler alert: of course they ate watermelon. Watermelon is delicious.

While this was by no means the biggest culture shock – think polygamy, witch doctors and lion hunting – despite all our differences, a visit with the Maasai people was my favourite part of my trip to Kenya (although seeing a leopard munching on a freshly caught gazelle was a close second). 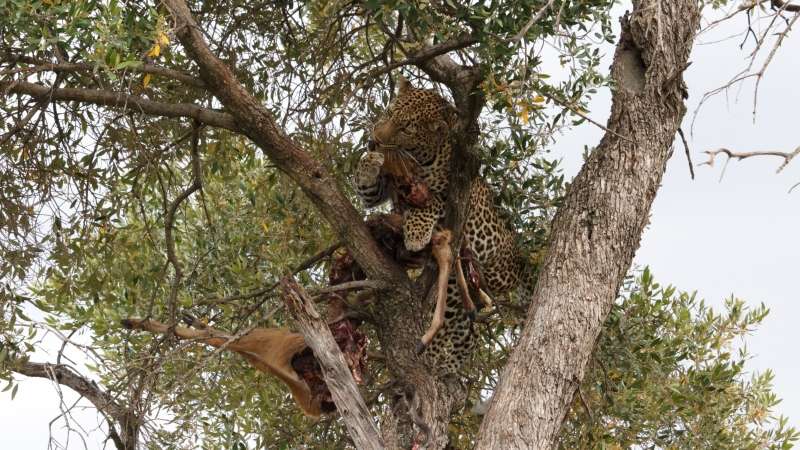 The leopard in question

Although they now eat watermelon (and trade for corn and other goods), the Maasai are a semi-nomadic people who seem to live with one foot in the past and one in the present.

As I discovered on my Kenya Wildlife Safari, they attend college, yet live without electricity or running water. They have Facebook accounts that they access at internet cafes, yet couldn’t understand the concept of a phone call to another country (my roommate called her brother in India to prove it was possible)!

RELATED READ: HOW A TRIP TO KENYA’S MASAI MARA CHANGED MY LIFE

We were greeted at our campsite by our hosts, Steve and Dave (if you haven’t guessed, these are not their Maa names). Steve, who we learned was the chief’s son, led us to his village, where we met his first wife, Esther, who welcomed us into their hut. All nine of us piled into the small hut made of tree branches and cow dung. Speaking to them was fascinating; the Maasai live such vastly different lives to ours. Each question begat more questions, and before long we were told our time was up, but we were promised lots of time to talk with them later that night. 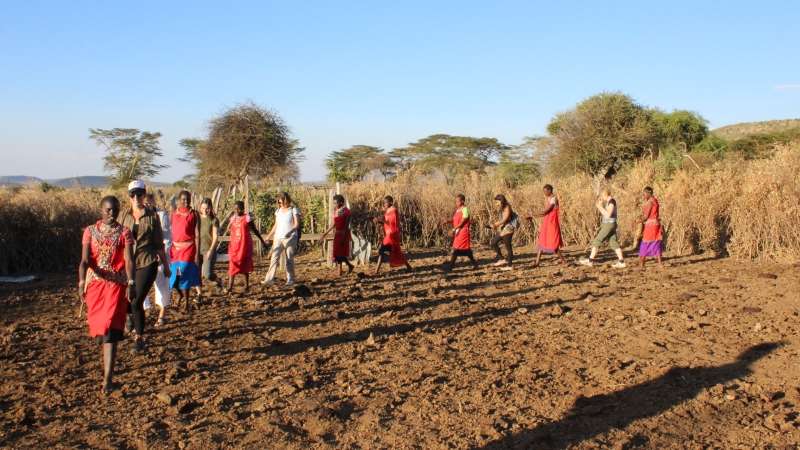 My group dancing with the Maasai womeb

We were then led into a large fenced-in pen where a line-up of women dressed in shukas – the traditional cloth worn by the Maasai – and beaded jewellery were waiting for us. They were singing and chanting and swinging their arms to the beat. They advanced toward us and it became clear that they wanted us to join them, so I handed my camera to a man in our group (the men would have their own special ceremony to take part in later) and tried my best to repeat the Maa words they were chanting.

When the dance ended, we got a chance to talk to the women and children of the village. The first thing they asked us was if I was married (answer: no), if I had children, (answer: hahaha no way) and how old I was (answer: 27). This elicited laughter from from everyone as I was basically ancient by Maasai standards.

READ MORE: 6 THINGS TO KNOW ABOUT CAMPING IN EAST AFRICA WITH INTREPID

Next, it was the men’s turn.  Our group stood in a huddle, the men at the front. We were forewarned that women were not allowed to participate in the adamu – the “jumping dance” that makes up a part of the Maasai warrior initiation ceremony. We heard them before we saw them. The deep, guttural chanting immediately sounded more intimidating and electrifying than the women’s singing had been; it seemed to indicate something important was about to happen. 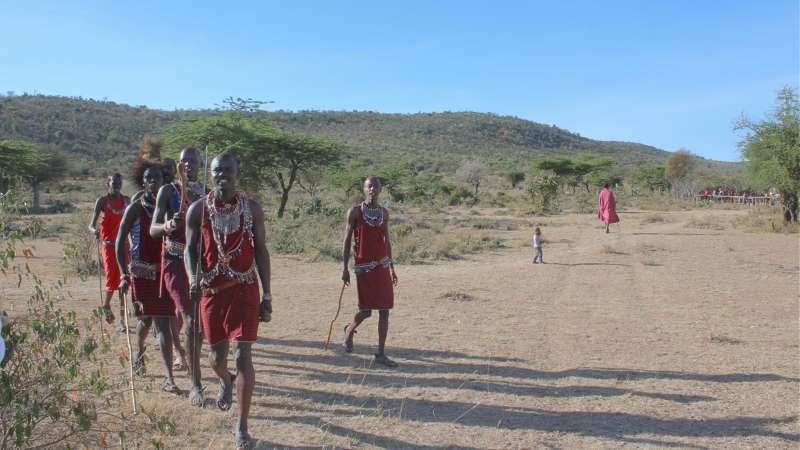 A lineup of warriors appeared and moved in unison toward us. One warrior, the “hero” (the one who dealt the first blow to the lion all warriors must ritually kill) wore the mane of the slain lion on his head. Dressed in shukas, painted in the red ochre that denotes a warrior, and carrying spears, they all stomped onward. They bent their knees and jutted their heads out as they walked; their beaded necklaces banged against their chests to the rhythm of the chant.

The men were invited to join the line, and the jumping began. In Maasai culture, the adamu allows warriors to demonstrate their skills to potential brides. The higher the jump, the more attractive the man is to the women watching. The laughing and head shaking from the crowd who gathered to watch told me that the men in our group were not very attractive by Maasai standards. 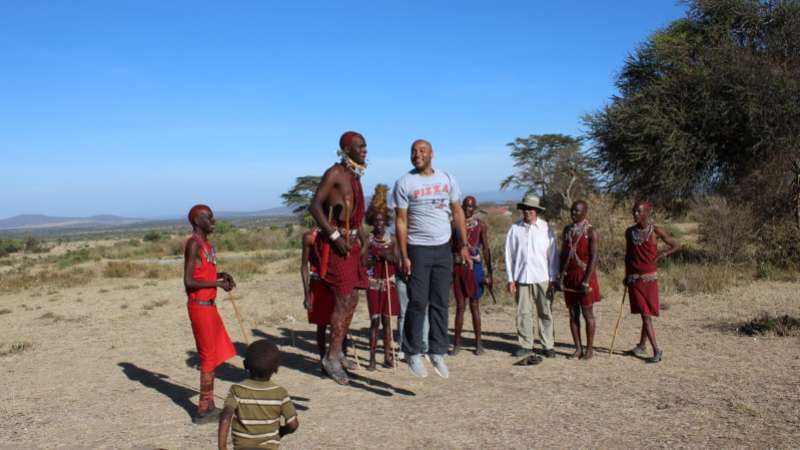 After the jumping ceremony, we visited a little market area where we could buy handicrafts like beaded jewellery and sculptures from the Maasai women who made them. Before I visited, I read horror stories of people visiting other Maasai villages and feeling pressured to donate money or buy things. But other than some pleading looks from the women I had made friends with earlier, I didn’t feel compelled to spend any money.

RELATED READ: ONE TRAVELLER’S ADVENTURES ON THE SERENGETI TRAIL

After that, we were brought to an open area where the male warriors were practicing their warrior skills. They allowed us – even the women – to try our hand at throwing spears and clubs, and we allowed them to laugh at us. 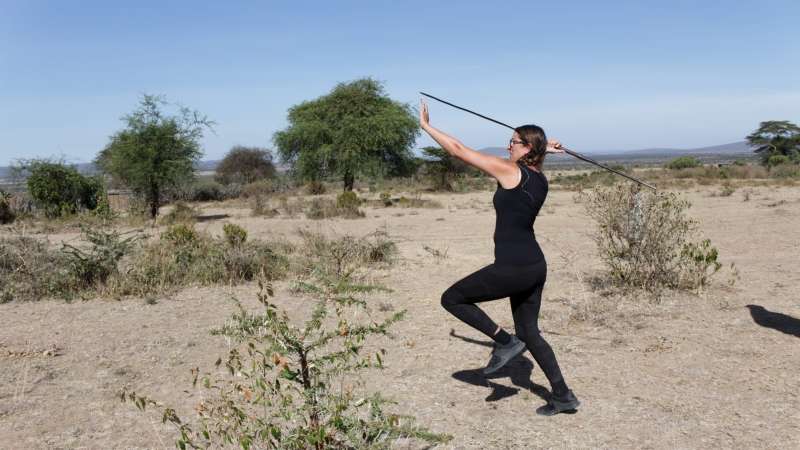 Telling stories around the campfire

Although the dancing and jumping rituals were special, the real magic of interacting with the Maasai happened that night around the campfire.

That night, Steve and a group of elders, warriors and a few young warriors-in-training came back to our campsite to tell us the history of the Maasai people under the star-filled sky. They then invited us to ask about everything from education to diet and everything in between. They were patient as we pelted them with questions. Their English was excellent; the Maasai who attend school go to the same schools as other Kenyan children and therefore speak Maa as well as the official languages of Kenya – English and Swahili. And although they were often disarmingly blunt about things that might seem foreign to us, it made it super easy to talk to them. Furthermore, it was refreshing to hear about their culture and practices from their point of view instead of through the lens of a translator. 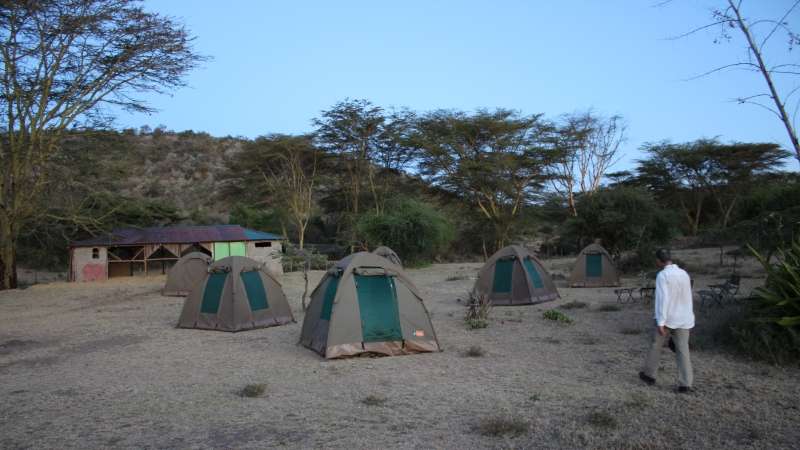 We asked them everything from whether the men get an anesthetic when they are circumsized (answer: no), to why their shukas are red (answer: because it represents bloodshed), to what they do when someone is sick (answer: first consult the herbalist, then the witch doctor, then go to a hospital).

RELATED READ: WHAT MY KIDS LEARNED ON A KENYA FAMILY SAFARI

Then we asked if they had any questions for us, which was equally as interesting. They were as fascinated with us as we were with them. 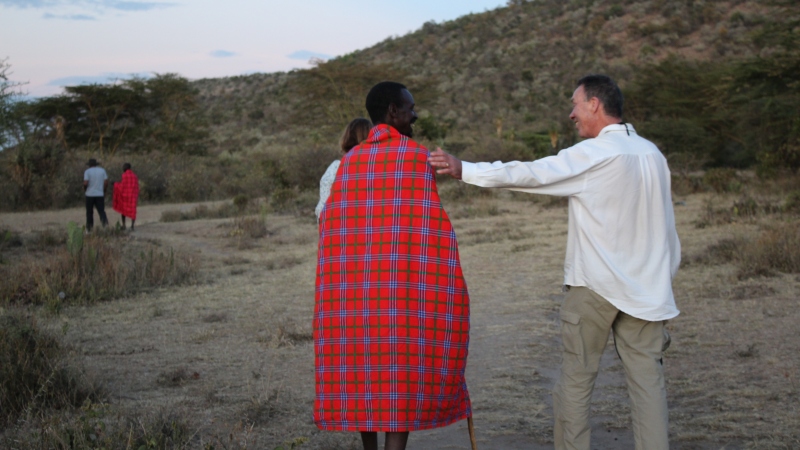 Making friends with a Maasai elder

The Maasai men were all perplexed that in our home countries (Canada, the United States, India and Australia) monogamy was the norm and that most people marry for love, which they seemed skeptical yet respectful about. They were shocked that people lived in high-rise apartment buildings (many have never made it into a city like Nairobi to see big buildings). They even deemed my fellow traveller’s backyard “paradise” because they had never seen manicured shrubbery, mulch or a pergola before.

READ MORE: HOW TO CHOOSE YOUR IDEAL AFRICAN SAFARI

Once the question period died down, we broke off into smaller conversations around the fire. The Maasai offered us some of their tobacco snuff and home-brewed beer, but we stuck to the wine we had bought at the local liquor store and talked until we exhausted all the questions we had for them and vice versa.

To be honest, as we waved goodbye and our truck pulled onto the road to head back to Nairobi, I felt a little conflicted about our visit with the Maasai people. On the one hand, they were very respectful of us, and their openness and willingness to share their culture with us made it an incredible and eye-opening learning experience.

But, on the other hand, I couldn’t help but feel that their patriarchal society must be difficult for the women living in it. I wish we had had more time to speak with the women, as the men mostly acted as the tribe’s spokespeople. But I can’t presume to understand all the intricacies of their society after spending one day in it. 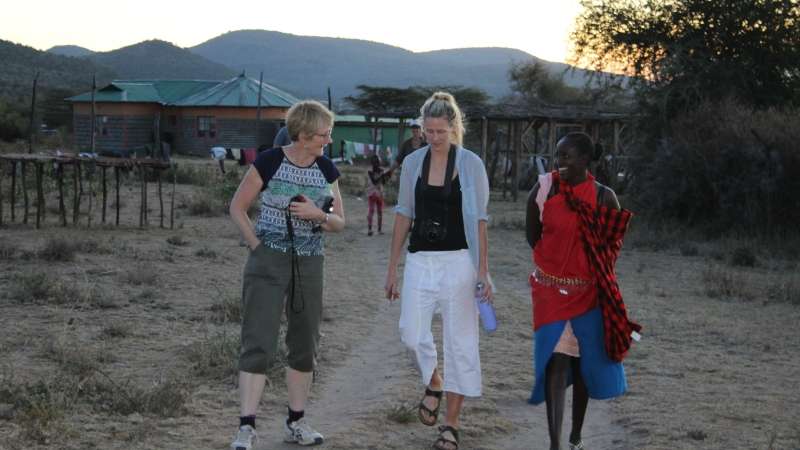 Chatting with a Maasai woman

No matter how much I travel, one thing that never ceases to amaze me is how much people have in common. Despite our many differences, we all enjoyed learning about each others’ lives, telling stories, and sitting around a fire while sharing a drink.

I will always remember the Maasai for their big smiles and their warm welcome into their community.

And even though it only lasted a night, and the safari part of the tour was incredible, my visit with the Maasai was undoubtedly the best part of my trip to Kenya.

Want to experience Maasai culture for yourself? Check out our Kenya Wildlife Safari trip. 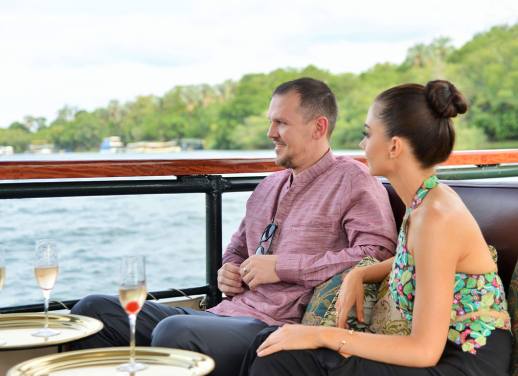 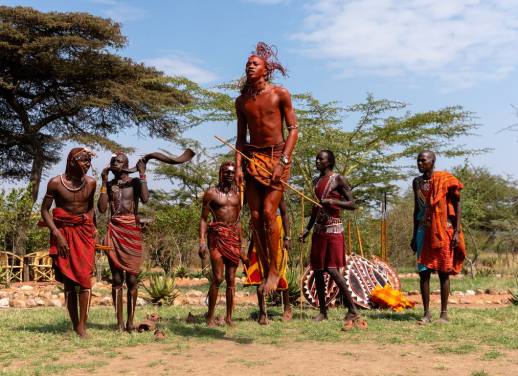 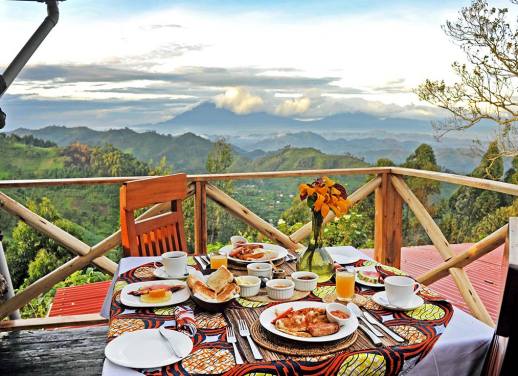 Hi, I’m visiting Kenya in February 2021 and wanted to know how you visited them? I’m trying to plan my trip and figure out how many days to set aside. This may be a silly question but, are the Maasai mainly in Maasai Mara area 6-7hours from Nairobi? Please email me I’d love to hear from you.

Hi Tristan, no silly questions here! Please contact our reservations team here: https://www.intrepidtravel.com/contact-us and they will be able to answer all your questions about Kenya travel. Take care, Amy.

Interesting observations through feminist eyes. The men must have pitied domesticated western men, and the women must have felt sorry for selfish and barren life.

You are so far from understanding the true Maasai culture. You just had the tourist experience. You feared that they woould be begging for money but Maasais used to live without any money in total happiness. They are just extremely welcoming but tourism like you do is harmful to the preservation of their culture although it might not seem like it.

Thank you for sharing your experience. It brought back wonderful memories of our time there in the same camp.