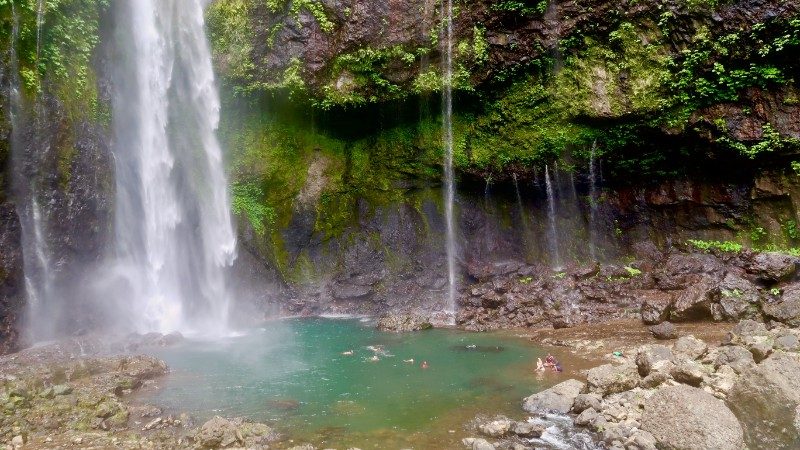 Taking a day trip to the interior of Fiji’s main island wasn’t initially in my travel plans.

I soon realised how lucky I was to undertake this adventure when I met my guide, Joji, an ex-professional rugby player who followed the love of his national sport around the world before deciding to return to his home country. As we chatted, Joji shared his experiences about playing rugby and working in Japan, France and New Zealand. I turned and asked, ‘Why did you come back?’. Joji laughed. ‘Because it’s my home’, came the reply. For something that sounded so simple, I soon realised that the meaning of home runs deeply into the value systems of many Fijians, as their connection with the land lasts a lifetime.

EXPLORE FIJI ON A SMALL GROUP ADVENTURE WITH INTREPID NOW

Making our way from the capital of Suva to Nabalesere village in Ra Province: the scenery opens out to rolling hills covered with grasslands, impeccably kept villages and river crossings that take you deeper into lush tropical forests. The northern parts of Viti Levu were once known as wild and rugged (and they still are) but now the region has become more accessible thanks to upgrades in road infrastructure and as knowledge of the area is passed to other travellers.

We were the only visitors to Nabalesere that day – an unlikely group of four from Germany, Belgium, Kuwait and Australia – the Aussie being me. Heavy rain had fallen the night before (we were travelling during the start of the wet season in December) and there were discussions as to whether we would be able to make it across the river. Our guide was reassured by the community on a phone call that the crossing was accessible and all was A-OK to get there. Visits are organised directly with the community’s tourism working group and permission is asked before gaining access to the waterfall. 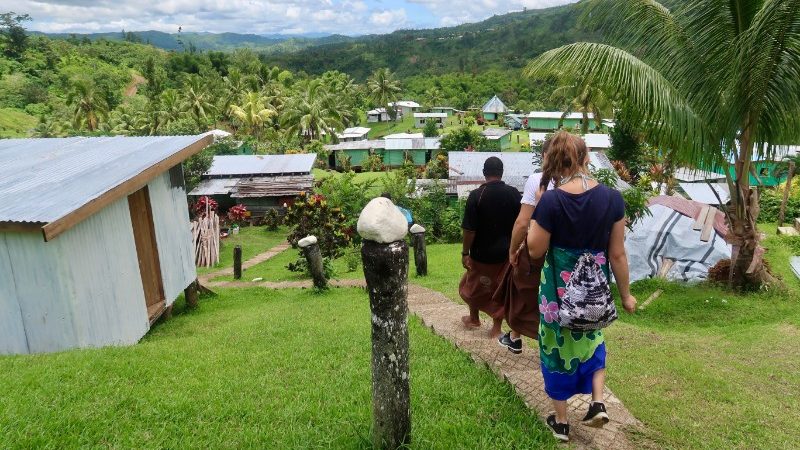 Wandering through the homestay.

Arriving at the village, we wrapped a sulu around our legs (much like a sarong) to cover ourselves out of a sign of respect and modesty to the community. The traditional garment is worn by both men and women throughout Fiji. We were asked to remove hats and sunglasses, then we were greeted by Paula, our local guide for the day. While being led through the village we gave a wave to the curious eyes, which was returned with a hearty ‘Bula!’, meaning hello in Fijian. Ferns along the path leading to Savulelele waterfall.

Everyone seemed to know what we were there for and the welcoming feeling extended every step of the way as we took the short one-kilometre incline to the thunderous wonder. As we followed the trail and Paula shared his knowledge of the area, the ferns grew bigger and clusters of grass leaned into the path, growing denser with each step. We heard the grand thunder of the falls before we caught our first glimpses. Taking a river crossing, a heavy mist hung in the air and tiny droplets patted our forearms as we edged closer. 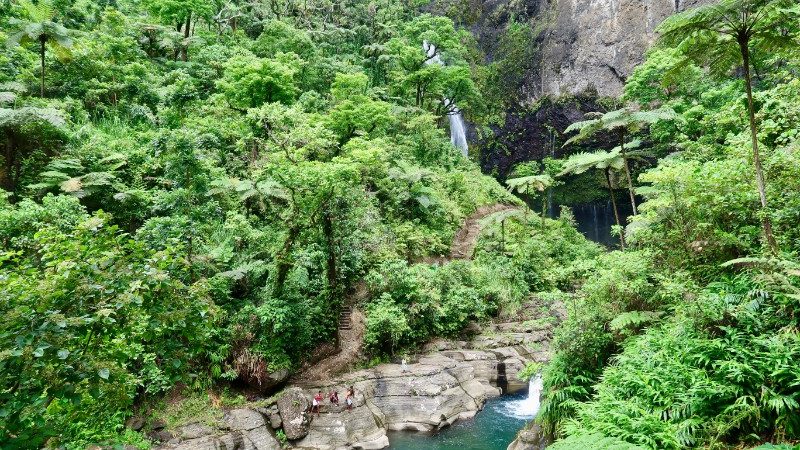 The river crossing at Savulelele.

What a sight! Extending deep into the base, the sheer magnitude of the waterhole was overwhelming as the water tumbled over deep green hues of moss-covered rocks that spread into every nook and cranny, creating its own cool climate. Shrieks of excitement echoed from the young ones who had followed us in from the village. 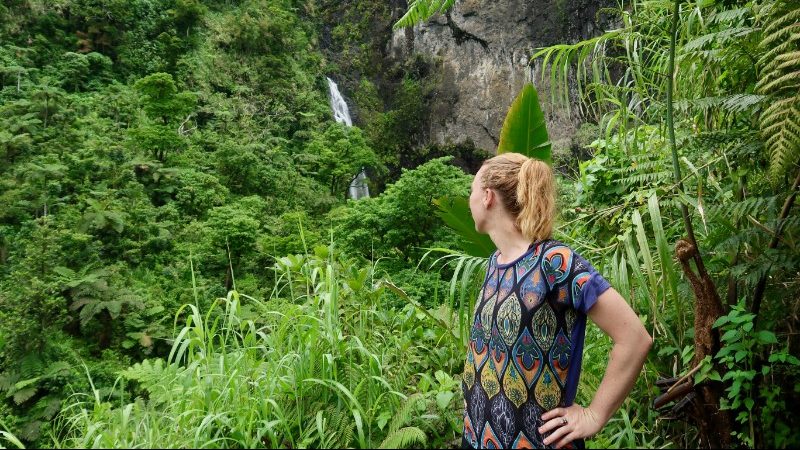 Getting closer to the falls, every sense was awoken. After what I felt was a brave bit of manoeuvring around the base of the waterfall (yet the others seemed to handle with grace), both Joji and Paula encouraged me to jump in. ‘Here I go!’ I thought. The rush of cool water felt healing to the soul. And as I paddled around Savulelele waterfall, I realised this was our time to enjoy what Mother Nature had brought to Nabalasere.

RELATED: 7 REASONS WHY FIJI IS THE ULTIMATE ADVENTURE DESTINATION

Returning to the village, we were invited to the community hall to warm up over a cup of locally grown lemon-leaf tea and sit down cross-legged to meet our local hosts. As we introduced ourselves, we shared our impressions of the waterfall. The pride felt for Nabalasere and its natural surroundings radiated from each community member. As the sharing continued, a woman handled a cream mesh bag while sitting over a great wooden bowl named a Tanoa. A comfortable silence fell over the hosts and, as guests, we followed their lead. We watched as the Tanoa was filled with clean drinking water and the woman plunged the bag filled with kava roots into the bowl, then wrung out the cloth. The swishing rotations and squeezing continued at a steady pace until the water began to turn the colour of river sand. 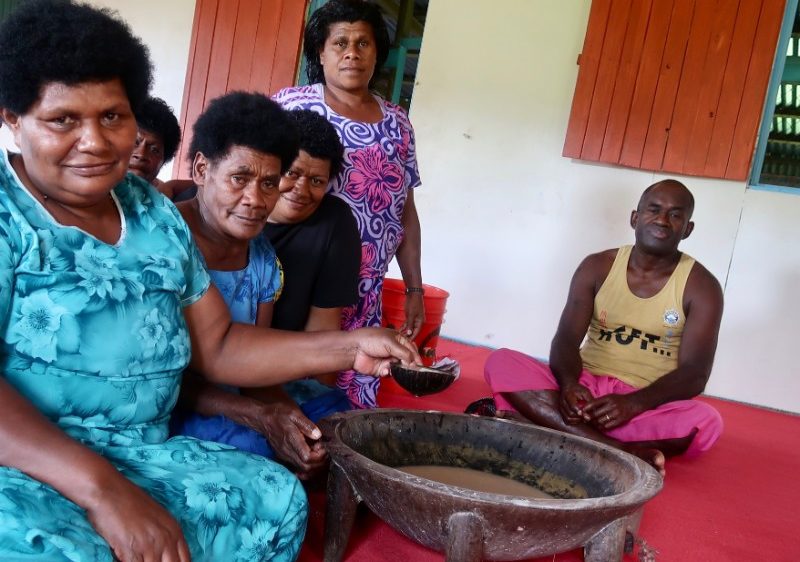 For each coconut cup that was presented to our group, the recipient was gently directed to clap their hands three times, then to gulp the liquid down. When it came around to me, one of my claps seemed to falter, but that didn’t matter – I drew the cup to my mouth and quickly poured the liquid down like a mighty shot. I was given the nod of approval. It was definitely an earthy taste but not too strong. Two cups later my tongue felt slightly numb but other than that I was clear headed and caught up in the moment. This was the first time I’d been to a kava ceremony and tried the infamous beverage of the South Pacific.

RELATED: HEADING TO INDONESIA? HERE’S WHY YOU SHOULD SKIP BALI AND EXPLORE FLORES INSTEAD

Kava goes hand in hand with Fijian culture and hospitality, whether it’s in a remote village or within the urban centres throughout the islands. I’ve been told by Fijians it’s preferred in most communities over alcohol and is associated with a gesture of communication and togetherness. Drinking kava, it can take up to four or five cups before you start to feel the calming effects, however this can vary depending on the strength of the mixture.

For me, the trip to the interior on the island of Viti Levu was about learning from the community and experiencing traditions in an incredible natural environment. You’re left with a feeling of gratitude after being invited into someone’s home. The curling ferns and kind interactions from every person left a lasting impression.

Interested in exploring Fiji? Check out our 11-day Fiji Expedition, which takes you away from the resorts and into the less visited parts of Viti Levu.

All images by Jenna Hoare. 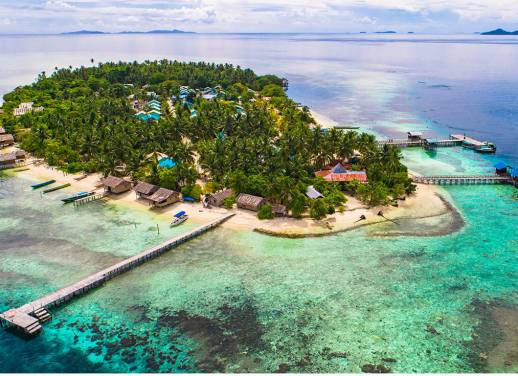