Home » The magic of connecting over cuisine in India
FeaturesFood

The magic of connecting over cuisine in India 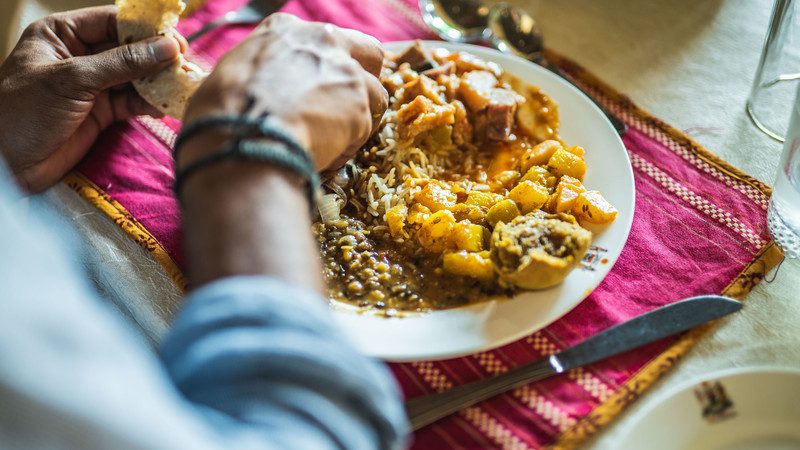 It was the famous American chef James Beard who noted that “food is our common ground, a universal experience.” He was a chef, and I’m a writer, but I couldn’t have said it better myself.

Food tells you everything you need to know about a nation or city. Even the way that meals are approached can offer telltale signs of how a culture approaches life itself. Take, for example, the fact that when I lived in Istanbul, dinner was an all-night affair unless otherwise discussed, a sure sign of the importance of taking the time to enjoy the smaller things in life.

Conversely, in everbusy Toronto, my hometown, it’s more than likely that after an hour or so, your server might start to give you a sideways glance and wonder when you’re clearing out for the next patrons.

In India, however, everything is different. The experience of dining out is almost religious in nature.

The dishes, as well as practices around consuming said dishes, have been ironed out for centuries. The food itself has been practiced until perfect and each chef seems to add their own loving touch to the classic dishes of Indian cuisine. In India, food isn’t the fuel to get you through the day, it’s the reason for your day. 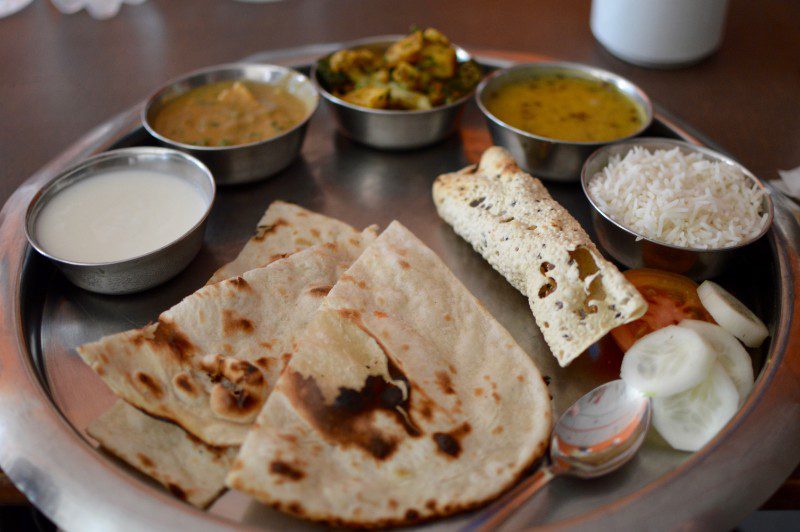 India is enormous and, as such, each region (and even town or municipality)  is going to have its own spin on things from a cuisine perspective. What I appreciate about Intrepid is that, when I was on the Delhi to Kathmandu tour, I always had context. Our local leader, Chime, was always available not just to run down what a dish consisted of, but even to talk about where a dish originated from – its “story” if you will.

And as a group, we ate our way through the nation.

Orccha quietly won my heart. It’s a fantastic little town that I think is an integral part of the Delhi to Kathmandu trip at large. I want to focus on one particular meal we had in Orchha that I believe encompasses the ethos of the trip very nicely. Our group was kindly welcomed into the home of a family there, and so commenced a cooking demonstration for the ages. 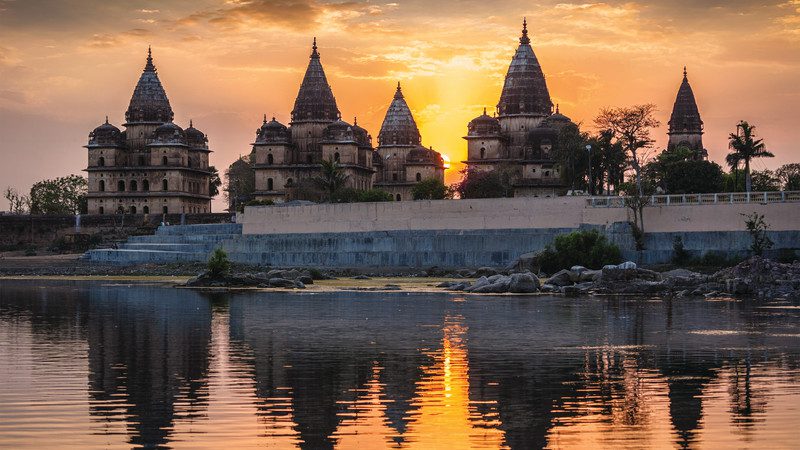 The laid-back medieval town of Orchha

I adored this portion of the trip because it’s something I likely couldn’t have managed on my own. I’ve travelled to nearly 80 countries, and I’ve had my fair share of experiences to be sure, but we had the opportunity to watch a meal being cooked, explain how to cook it, then, my personal favourite part – the eating!

Our group departed from our nearby lodging and arrived outside of a lovely baby blue home. We entered, and I immediately noticed a woman sitting cross legged with pots and spices laid out in front of her. She was called Vandana and was wearing a white sari and a warm smile. Her kids sat in the adjacent room doing homework with their father and we all said hello, then sat in a semicircle near the front of the room.

She fired up the portable stove (along with our collective excitement) and her sister brought out some hot cups of chai which were a delight. Her smile had a way of washing away the slight nervous energy that remained. There were many dishes on the menu, but the first dish she showed us how to make is known as bharta. It’s essentially a spicy eggplant that goes well with jasmine rice.

READ MORE: 6 DISHES THAT PROVE INDIAN CUISINE IS THE BEST IN THE WORLD 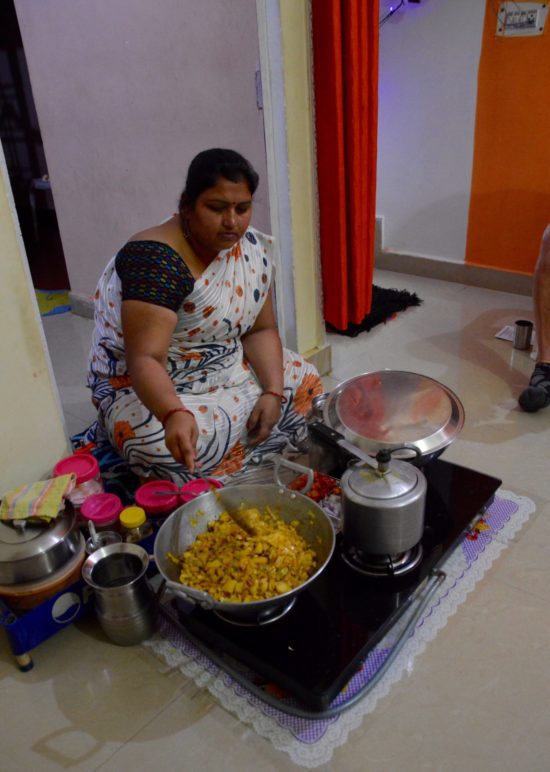 Vandana cooking up a storm

Watching dishes be slowly constructed was an intriguing experience because I feel like, as visitors in another nation, we often assume that we could never make the food particularly well when we’re back in our respective homelands. However, when you see someone add in the oil, then the perfect portions of nutmeg, cardamom, chili, cumin and so on, the notion that the dish is beyond your ability to make begins to evaporate. I’ll likely never make bharta as well as she did, but I also know that it doesn’t mean I shouldn’t try. In fact, we were even given a nifty handout with instructions and ingredients to make the dishes for just that reason.

The love of food is very human and very intimate, so to be welcomed into her home was something special. At that moment it wasn’t about eagerly awaiting “authentic Indian food,” but rather appreciating a meal cooked with kindness and passion from someone who had welcomed us into her home. I had innumerable meals in India that were downright scrumptious, but it was the nature of this meal that made it the most memorable of the trip. A restaurant serves whoever walks in, but she was sharing this with us in her home. That’s not something you get to experience everyday, and it’s something that will always stay with me. 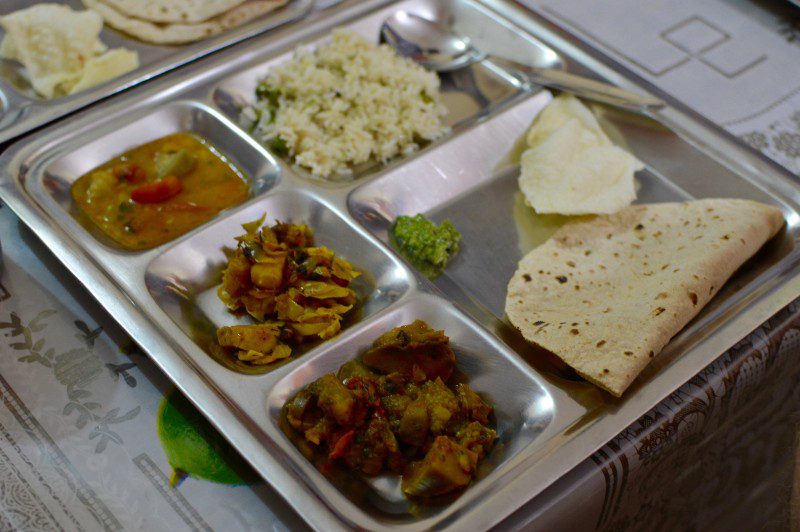 I feel this experience also brought the group closer to India at large, as we had a deeper understanding of the cuisine and culture, and had been graced by the warmth of an Indian home.

To accompany the bharta, we also had a delectable cabbage and potato vegetable curry, as well as a nice, spicy dal, which is, more or less, a flavourful lentil soup. It was served with some freshly cooked naan and chapati. My goodness, upon further recollection of this meal, I’m not all that far from boarding a plane and heading back to Orchha. I’m sure my fellow group mates would be of the same persuasion.

What else did we love?

While the list of what we appreciated as a group was rather lengthy, there were a few subplots that kept popping back up as it related to food. The first, was the sheer adoration that myself and a few other group members had for vegetable pakora. This is typically a mix of vegetables with chopped onions, green chilies, and a smattering of delicious spices which is all deep fried into little patties. It is usually served with an insatiable dipping sauce that could be tamarind-based, coriander-based, or something else entirely depending on the restaurant. 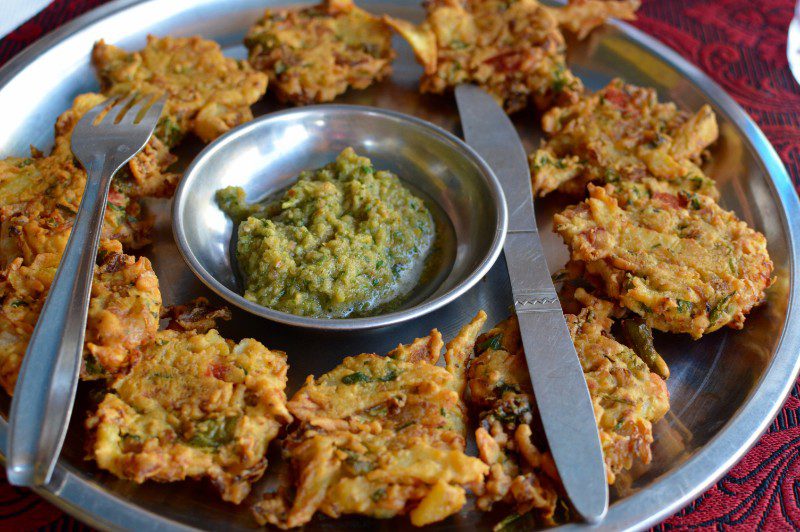 By the end of our time there, there was a group of us who would order vegetable pakora on top of our regular meal almost every time. When the server came over, our group would look around and wonder if, once again, we were going for the pakora. The answer, as you can imagine, was yes.

The other “hit,” if you will, was the momo. If, by some odd chance, someone wasn’t getting some vegetable pakora that meal, you better believe they were getting some momos. A momo is a dumpling typically served with vegetables or chicken, but the flour exterior is usually as soft as butter, which makes them both addictive and delectable. I will tell you that if I was in India at this very moment, I’d be getting a few plates pronto.

READ MORE: HOW TO AVOID DELHI BELLY IN INDIA 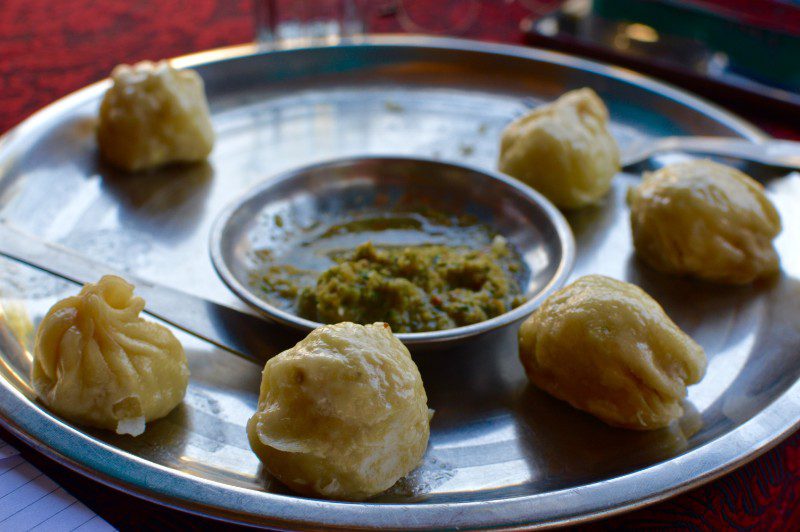 All in all, we had fun as a group learning about the food from a real cuisine perspective, but we also had fun ordering and talking about what made our hearts beat a little faster and our eyes a little wider. Everyone had their preferences whether that was tandoori chicken, curries, tikka masala, or dansak, but what I hadn’t considered is how many dishes I’d be able to see (and eventually taste when our group got a little closer). When you travel with a group, your exposure is just that much greater because instead of rolling the dice on one dish, you get to see a large group roll the dice.

In India in particular, the food is a realm worth being explored, and with some intentionality. I’m so glad it was an effort my whole group made together. As it turns out, when you’re all climbing the same mountain, you all get to appreciate the same views.

Want to enjoy this dreamy cooking demonstration for yourself? Check out Intrepid’s Delhi to Kathmandu trip.

Mad about Indian food in general? Our India Real Food Adventure is perfect for you.

Chris has captured the essence of India perfectly in this article. I shared this eating experience with Chris and it left an indelible mark on my taste buds. When we returned home, my daughter who was my travel buddy, brought out the recipe sheet we had been given and went about replicating our culinary Indian experience. The spells and tastes that lingered through our kitchen brought back so many wonderful memories of our journey from Delhi to Kathmandu with Intrepid Travel.
India is a destination that will stir all of you senses but none more than your sense of taste.