Why you should add Southern Japan to your bucket list 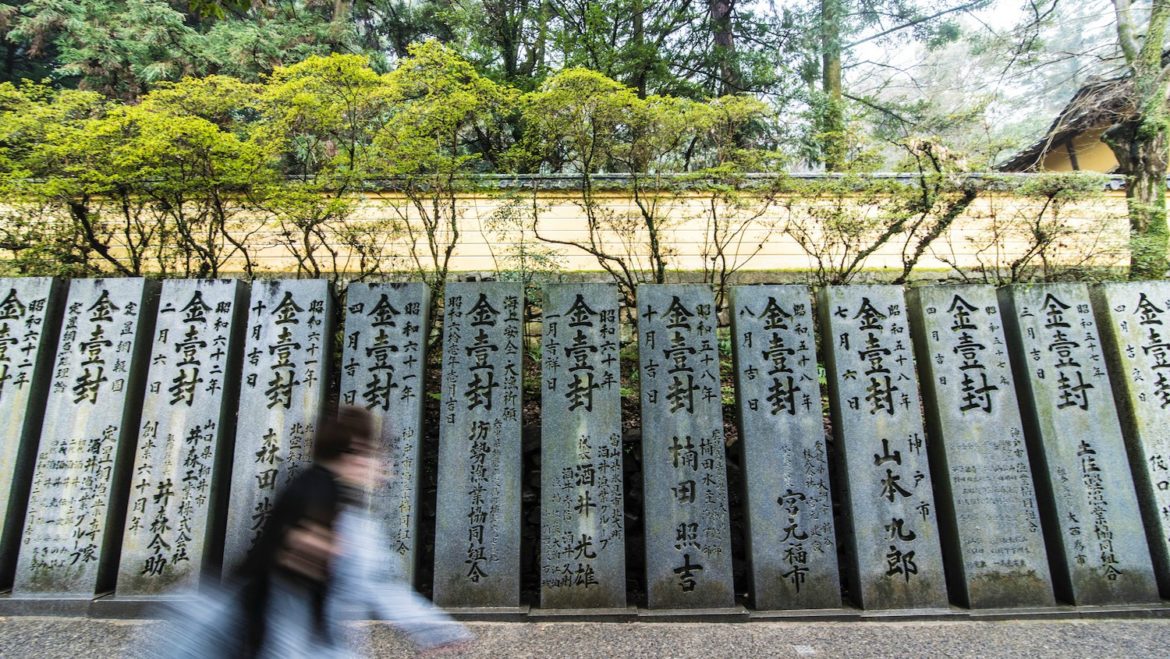 Japan is smaller than the US state of California. But, beware, this size can be deceptive to travelers…

While many of the country’s most impressive attractions are concentrated in central Honshu—between Kyoto and Tokyo, more or less—you do yourself a huge disservice by not exploring the periphery of the Land of the Rising Sun, particularly its southern one.

With vast, dramatic landscapes and dramatically fewer tourists than the rest of the country—some places are all but deserted—Japan’s south is in some ways its most authentic region, and certainly the least explored. Whether you see these underrated reaches of Southern Japan as part of an Intrepid tour (it’s new!), or build them into your own itinerary, I promise you won’t regret leaving Honshu behind for a bit. It will be your Japan holiday highlight, trust us. 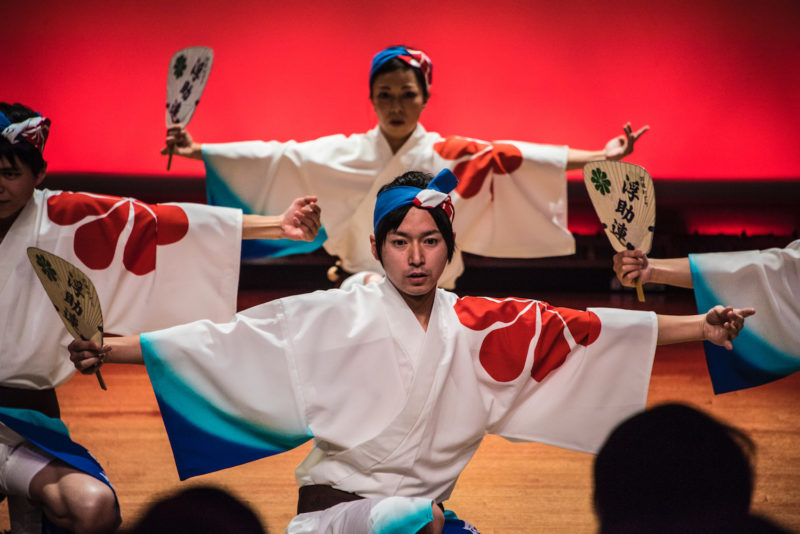 Here’s why Southern Japan is worth adding to your bucket list, and which spots really are a must-experience when there:

Colloquially, the main tourist draw to Shikoku is its 88-temple pilgrimage trail, which has been attracting the faithful—both Buddhists and ecotourists—for centuries. You don’t have to do the entire trail in order to make the trip over the Great Naruto Bridge from Osaka worth it, however, even though I’m the first to admit leaving Osaka behind is hard. I mean, who wants to depart the city that gave the world takoyaki octopus fritters?

READ MORE: WHY OSAKA IS THE BEST CITY IN JAPAN FOR FOODIES One of my favorite shrines in all of Shikoku, Kotohira Gu, is located within easy day trip distance of Takamatsu city, on the island’s north shore near the popular Konpira Onsen hot spring. Sprawled over a hillside with towering trees (TIP: in spring, many of them burst out into pink and white sakura cherry blossoms!) and architecture that dates back to the first or 12th century (depending on who you ask), Kotohira Gu provides enlightenment and exercise. Yes, reaching the inner shrine requires you to scale more than 1,300 steps!

Speaking of the Naruto Bridge, which connects Shikoku to Honshu via Awaji Island, just underneath it is where you’ll find one of southern Japan’s most fascination natural phenomena: Naruto Whirlpools. (In spite of their name, and the way they spin your tourist boat around, I promise they won’t suck you down to the bottom of the Seto Inland Sea!) 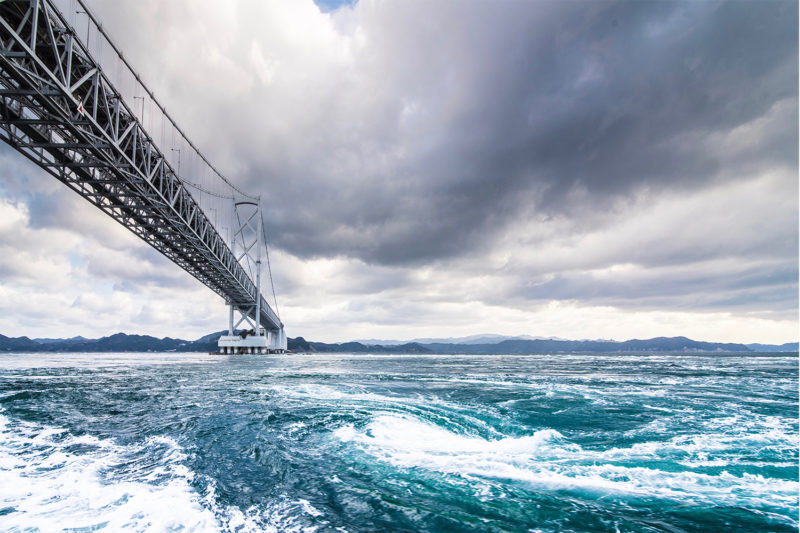 Another essential nature spot in Shikoku (I’ll get to Kyushu in a few paragraphs) is the Iya Valley, a dramatic region just south of Tokushima deep in the heart of the island, characterized by towering gorges, crystalline blue rivers and rustic (but terrifying to cross!) rope bridges, which are actually safe in spite of how rickety they look.

Whether or not you make it as far south as Shikoku and Kyushu, one thing that surprises travelers who get off Japan’s main tourist trail is just how diverse Japanese cuisine is. I mean, there’s never a bad time for sushi, but I don’t know what my life would be like without crispy okonomiyaki panckaes, or delectable tonkatsu pork cutlet.

No matter your culinary persuasion, both Shikoku and Kyushu offer oh so many options to satiate your hunger. My favorite dish on offer in Shikoku is the udon soup, which pairs tender beef with the thick wheat-flour noodles you find in and around the city of Marugame. When you get to Nagasaki, make sure to sample the lemon ramen at Always restaurant, which isn’t necessarily characteristic of Kyushu cuisine, but is unlike anything you’ll taste elsewhere in Japan. 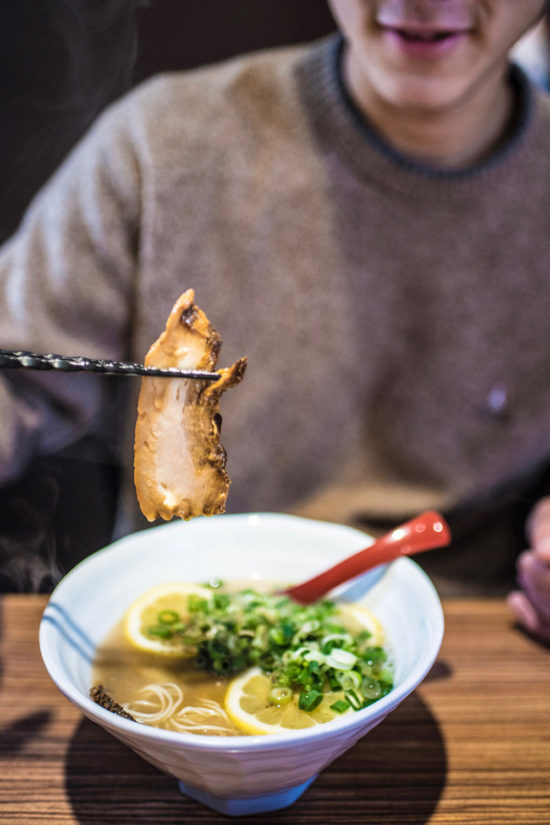 READ MORE: A LOCAL’S GUIDE TO VISITING JAPAN ON A BUDGET

Speaking of Nagasaki, it’s one of dozens of cities throughout Kyushu and Shikoku that present a side of urban Japan you won’t find in massive agglomerations like Tokyo and Osaka. For Nagasaki’s part, it offers one of the best “night view” spots in all of Japan, in addition to the unique (and, of course, devastating) history related to the atomic bomb the U.S. dropped on it during World War II.

Fukuoka, conversely, blends the modern and the historical (make sure to take a day trip to the massive reclining buddha at Nanzo-in Temple), while Kagoshima is the gateway to Yakushima Island, which I’ll describe in greater detail in just a moment. 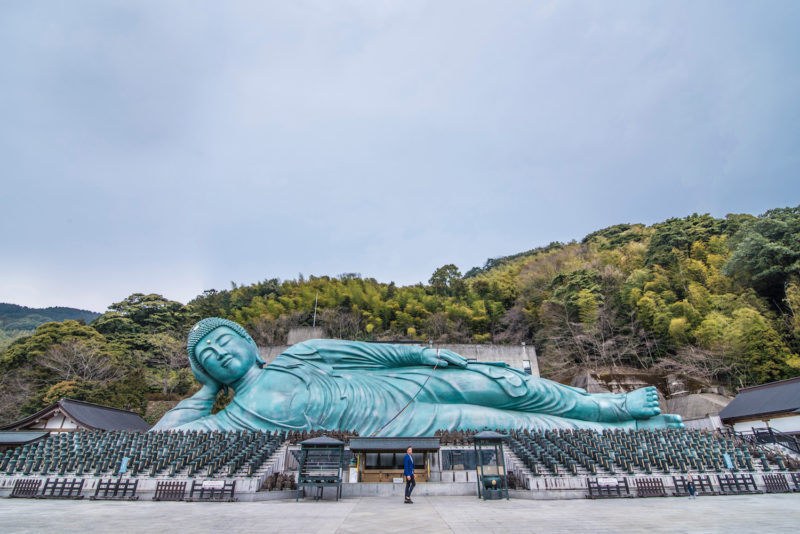 Shikoku is smaller than Kyushu, but is home to a great range of small-to-medium sized cities just waiting to be discovered. Whether you watch an awa-odori dance performance in Tokushima between trips to the Naruto Whirlpools and Iya Valley, scale ancient castles in Kochi and Matsuyama, or traipse around Takamatsu’s Ritsurin Garden before heading to Kotohira-gu, you’ll vastly increase your Japan travel street cred by getting to know its premier southern cities.

READ MORE: 10 AMAZING PLACES YOU SHOULD VISIT IN JAPAN

Visiting Kagoshima as I’ve recommended above not only allows you to say you’ve been to Japan’s southernmost major city, but provides easy access to sub-tropical Yakushima Island. Among its other claims to fame (its landscapes manage to evoke both Hawaii and the Pacific Northwest at the same time), Yakushima provides you the opportunity to hike among massive cedar trees that are thousands of years old. 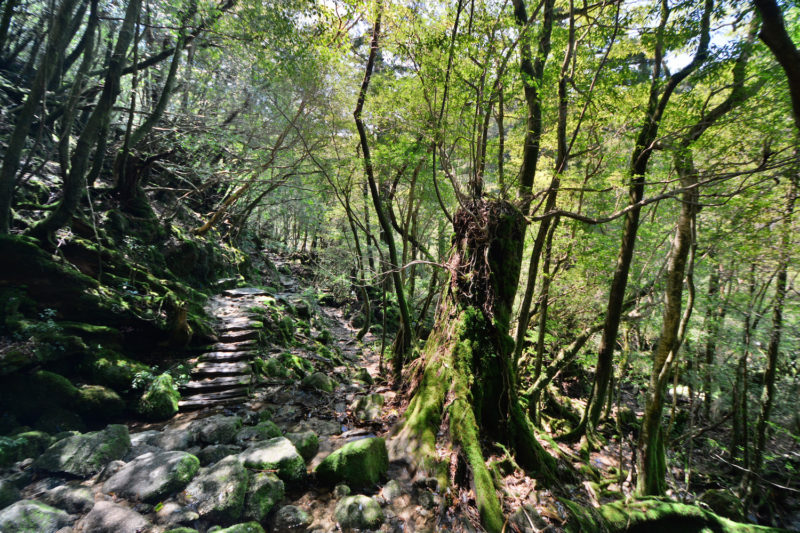 The trees in Yakushima are massive and also famous, having inspired one of Japan’s most famous cult anime films. On the other hand, even if you aren’t a fan (or even aware) of the classic animated film Princess Mononoke, you’ll still be able to appreciate the mythical quality of the scenery here. It will literally take your breath away, depending on the hike you select!

While secondary and tertiary destinations within many countries often deserve the lower rankings they enjoy on people’s bucket lists, this is not the case in Japan. 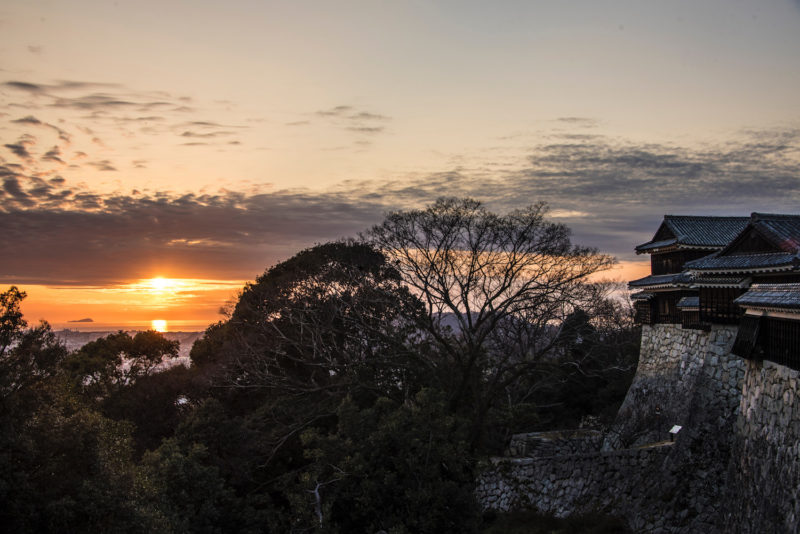 The southern islands of Kyushu and Shikoku are every bit as worthy of your time and attention as Kyoto and Tokyo, and maybe even more so. Whether you undertake the complex task of planning your own trip here, or take a show-stopping tour with an awesome company (wink, wink), a dive into Japan’s deep south pays major dividends…

The 88 temple trail sounds great. I would really enjoy that. Naruto whirlpools must have been neat. Great reading on southern Japan.

I spent four years apprenticed in a Yakitori shop on Kyushu. It is the most hospitable islands in the Japanese archipelago. The food is sublime and the natural wonders never cease to impress. Go.

A few years ago I walked the 1200 km Shikoku pilgrimage path to the 88 temples and the island keeps calling me back. Nagasaki is a wonderful city for wandering about, and just off shore is the hauntingly beautiful Hashima Island, commonly called Gunkanjima, once home to about 5700 coal miners and their families and now a magnificent ruin.