Home » This Agra cafe is run by survivors of acid attacks. Here’s why you need to visit.
FeaturesStories

This Agra cafe is run by survivors of acid attacks. Here’s why you need to visit. 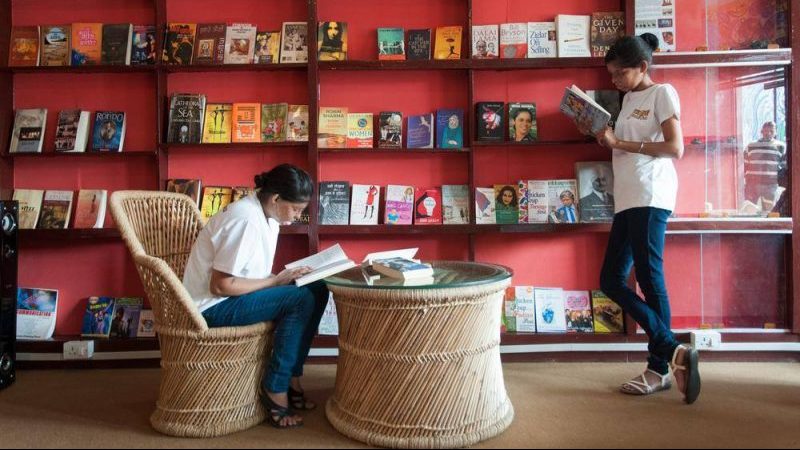 Please note: this article contains content that may be distressing for some readers.

The weather is scorching when we stop for lunch in a tucked-away cafe in Agra, India. The food on offer is fresh and tasty (and the drinks refreshing on days as hot as this), but the fare is not the reason to visit.

I’m with a group of travellers on an adventure around India with Intrepid. It’s day seven of our journey; in the past week we’ve experienced the frenetic energy of Delhi, the opulent grandeur of Jaipur, and Agra’s pièce de résistance, the jaw-dropping Taj Mahal. But today’s adventure is something you’re unlikely to see on many travel itineraries. 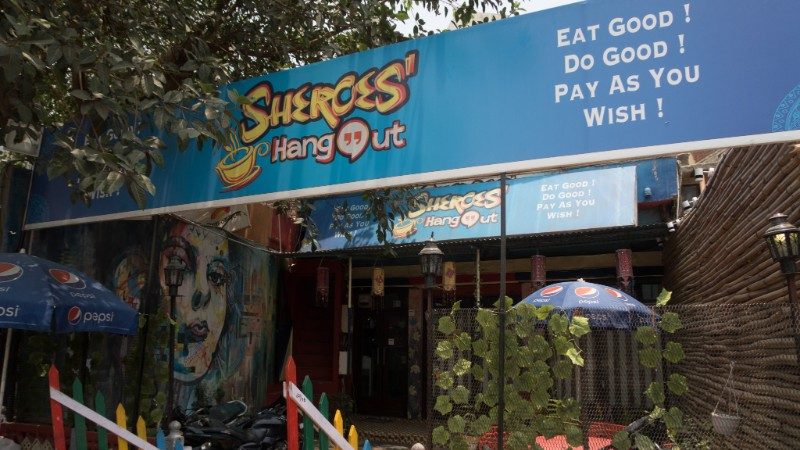 We have been welcomed to Sheroes Hangout by Geeta. She smiles warmly as she ushers us into the cool of the pay-as-you-feel cafe and gestures for us to sit down at a large table. After reading through the menu, we order our food and drinks and wave hello to the ladies working in the cafe. They wave back, smiling and cheerful. The women vary in age; some are quietly working while others chatter, but one thing unites them: they are all survivors of acid attacks. 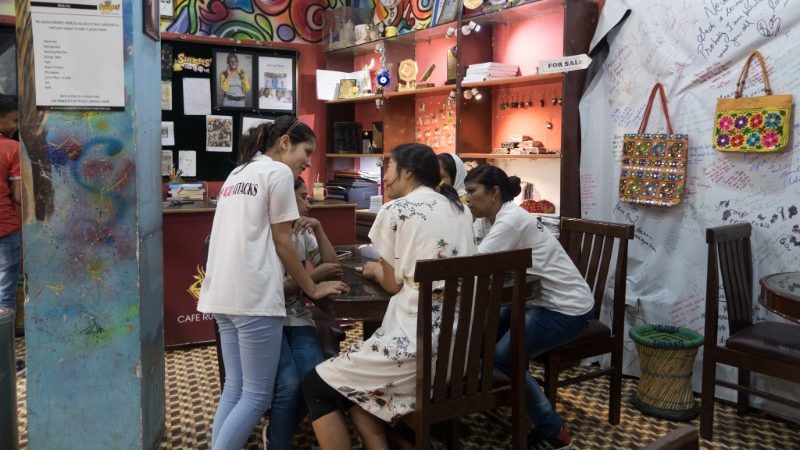 Posters of survivors and messages of hope adorn the walls.

Sheroes Hangout is run by these women – acid attack survivors – with the aim to remove stigma while offering opportunities for financial independence. The cafe gives these women a way back into mainstream society and, perhaps more importantly, a livelihood.

Geeta switches on the television in the corner of the room, and we’re shown a short film about each of the women’s stories, and how they came to work at Sheroes. 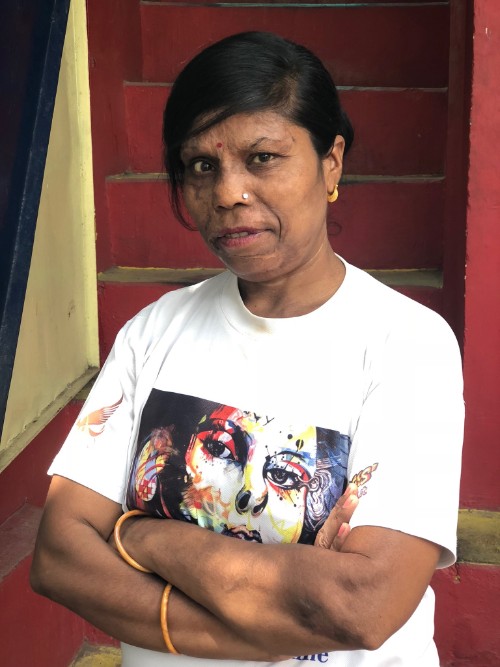 Sheroes has hangouts in Agra and Lucknow, with plans for more across India.

In May 2012, 23-year-old Bala was attacked by her parents’ employer after a dispute in her own home. She tells us that ‘A woman’s face is the most essential aspect of her beauty – they think the girl will sit at home and no one will marry her.’ Bala has undergone seven facial surgeries and says that she is slowly regaining her confidence. She’s learned to read and write, and has picked up English from the many tourists who visit the café. 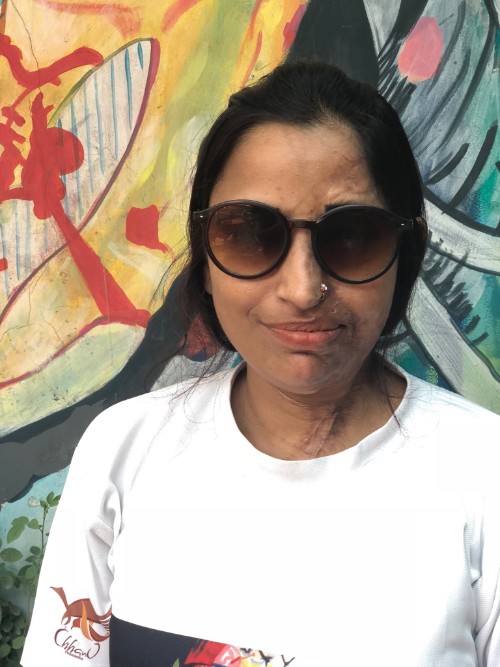 Survivors stories are varied and – devastatingly – there are many.

The same year Ritu, aged 20, was walking to volleyball practice when she was approached by two young men on a motorbike. One threw acid into her face before speeding off; at that time of the morning, the chowk was bustling with traders, yet no one stepped in to help. Ritu ended up losing her eye, and has had 10 reconstructive surgeries. She was attacked for snubbing the romantic advances of her cousin. 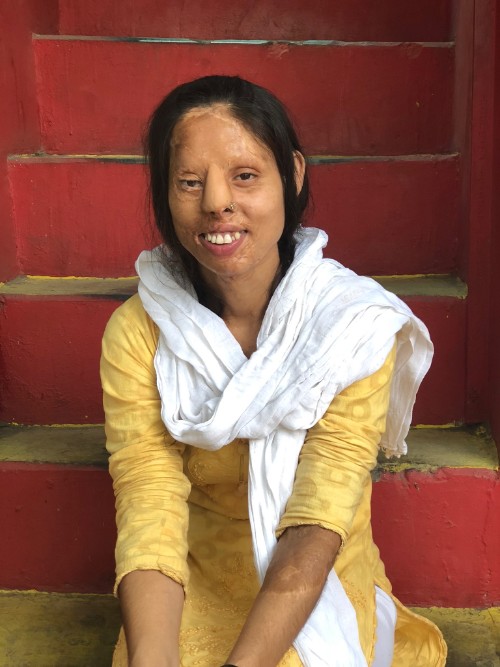 These women are survivors, not victims.

Survivors’ stories were varied, and devastatingly, there are many. Some women were attacked for refusing marriage proposals, giving birth to girls instead of boys, rejecting sexual advances. One woman was doused in acid over a land dispute. Whatever the reason, the punishment for the perpetrators was often lacking. There are 250 to 300 reported acid attacks in India each year, with many going unreported. There are very low conviction rates.

Posters of survivors line the walls of Sheroes; each displays the face of a woman, her name, and the date she was attacked. The café sells t-shirts emblazoned with slogans like ‘Stop Acid Attacks’ and ‘My beauty is my smile’ to raise money – and awareness – for these women. 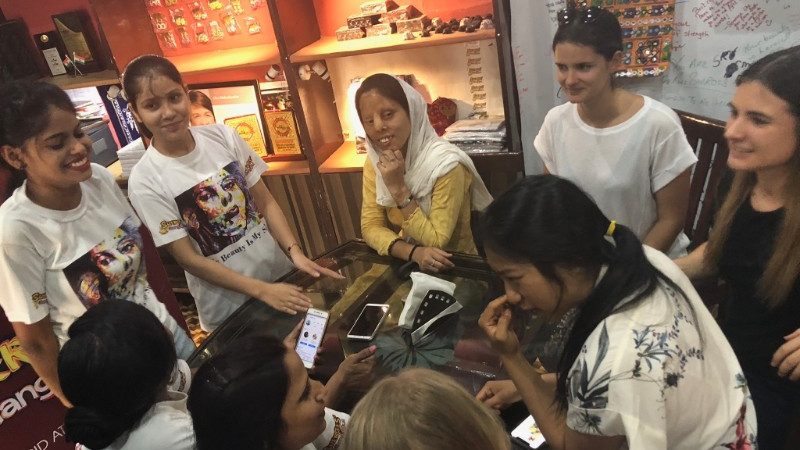 The women at Sheroes share their stories with us.

Until the government gets serious about banning the sales of acid in the retail community, and serious about punishing the perpetrators, Sheroes represents a new beginning for these women. A group who have come together to start talking about this, to work toward removing stigma, and find a way of offering employment and empowerment to women across the country.

As we finish our meals and say our goodbyes, we’re left with a quote from one of these incredible women: “Do not call us victims, because we are not victims. We are survivors, we are heroes.”

Lynsey Kirk, Marketing Manager for Intrepid Travel, has been working in the UK travel industry for seven years. Starting out in luxury travel, she found her way to the adventure travel sector, which is much more her bag. Her passion lies in growing the Intrepid Travel brand through creative campaigns and content creation. Lynsey has travelled to more than 30 countries, most recently Antarctica in January, pocketing the seventh continent.

I visited this on my third journey to Agra. Such a brilliant initiative and a wonderful place to visit.