Home » Penang has the best street food on earth. Here’s why.
FoodGuides

Penang has the best street food on earth. Here’s why. 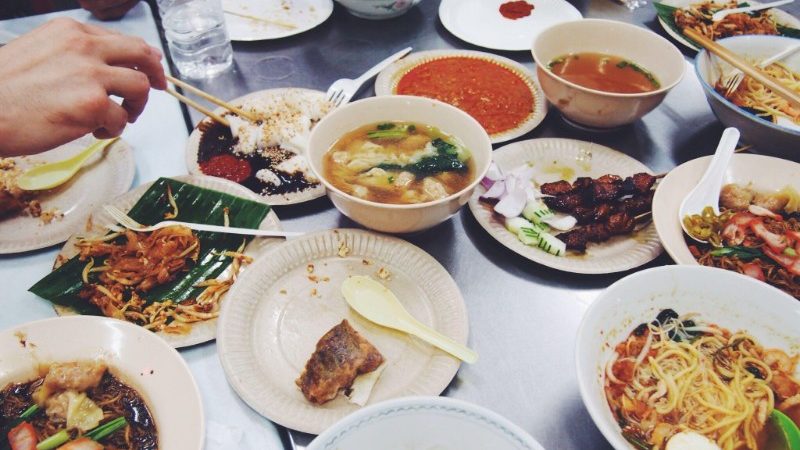 Much like the country itself, Malaysian cuisine is a multicultural symphony of Peranakan, Hokkien Chinese, Indian, Malay and British flavours.

Spicy sambals, elaborate laksas and fresh seafood characterise the food in Penang, Malaysia’s disputed culinary capital. Legend has it that Penang’s ‘hawker food’ culture originated with vendors who would wheel their wok-laden carts from door to door, serving Penang’s bachelors and businessmen. Over the years, many of the carts upgraded to shopfronts, but Penang held onto its market scene. George Town, the island’s historic core, is the best place to sample street food, starting with the iconic hawker centres at New Lane and Gurney Drive.

Here are eight dishes worth travelling to Penang for: 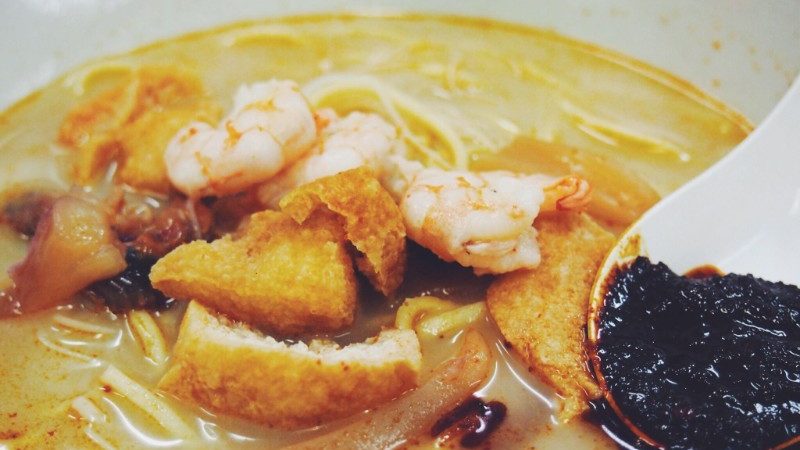 If you could distil Penang into a single dish, it would probably be assam laksa. The evolution of this pungent curry is linked to the island’s heritage and the influx of immigrants that resulted in an interweaving of Chinese and Malay flavours. The spicy-sour broth is made with copious amounts of tamarind peel, which gives it both its muddy colour and name (assam means tamarind in Malay). Served with flaked mackerel, rice noodles and garnished with pineapple and a squeeze of lime, assam laksa is traditionally eaten in the afternoon. As with most Penang dishes, choosing a favourite vendor is tough – but the 60-year veterans at Pasar Air Itam Laksa get consistently good reviews. 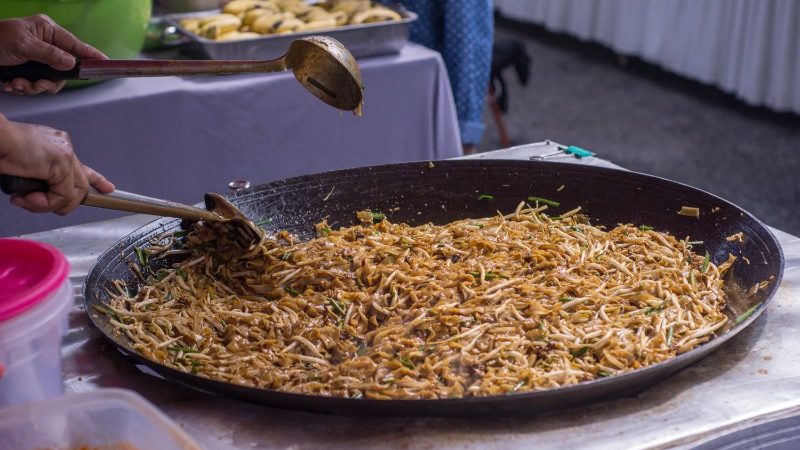 Char koay teow is a popular dish all over Malaysia. Flat rice noodles, heapings of bean sprouts, chives, fat prawns and cubes of pork lard are tossed in a searing wok until crisp. The Penang version often comes topped with a duck egg, which gives it a distinct, creamy mouthfeel. According to the locals, a good char koay teow is all about the wok hei, ‘breath of the wok’ – the unique flavour profile an unscoured wok accumulates over its lifetime and imparts into each bowl of noodles. 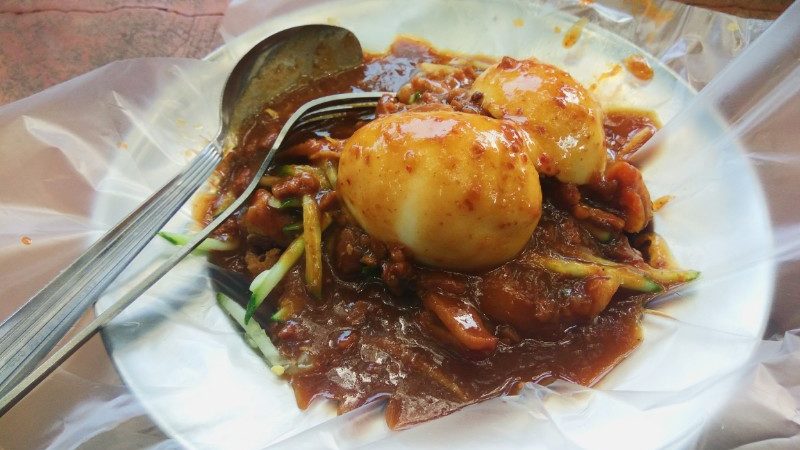 Meaning ‘mixed’ in Malay, rojak is just that – an ad hoc arrangement of bean curd fritters (you tiao), bean sprouts and assorted tropical fruits (mango, guava) loaded onto a plate. The whole thing is smothered in a treacly peanut sauce before being tossed with fresh pineapple and topped with crushed peanuts. The perfect accompaniment to a hot laksa, vegetarians can try the sans-cuttlefish version. 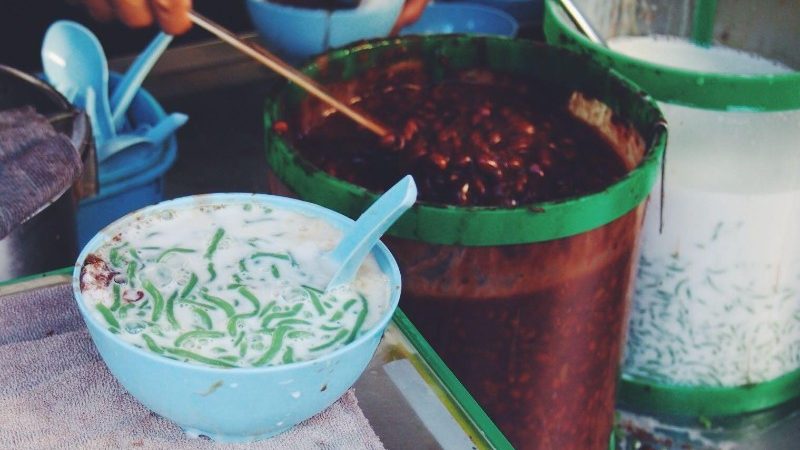 Chendul doesn’t exactly scream ‘delicious dessert’, but if you can get past the kidney beans, you’ll see why it’s a Penang favourite. The island is notoriously hot, so something icy to soothe body and soul is essential. A bowl of chendul consists of shaved ice, pandan-flavoured palm flour noodles (if you’re unfamiliar with pandan, it’s often described as an aromatic vanilla), immersed in coconut milk and sweetened with palm sugar. Try the TeoChew Chendul cart on Penang Road, which has been serving up this strangely textured treat since 1936. 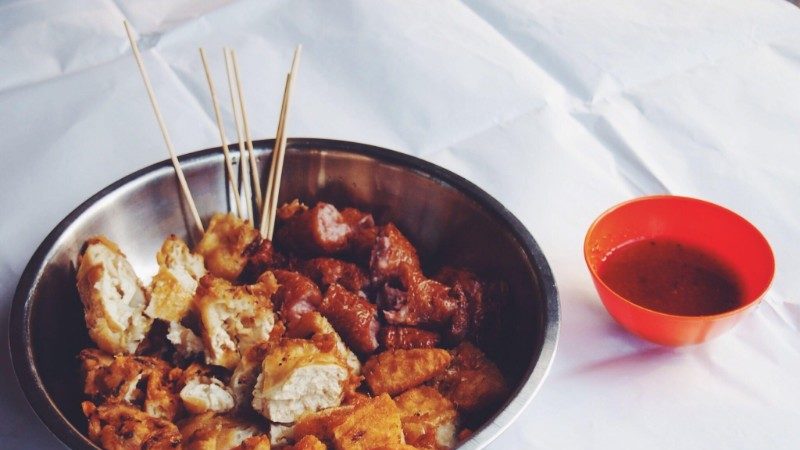 Penangites love grazing, and loh bak – a Chinese dish – is the ultimate bite-sized snack. Portions of pork marinated in Chinese five-spice (there’s also a tofu version) are mixed with chestnuts, carrot and onion, before being rolled in a sheet of bean curd and fried to a crisp. Typically served with other deep-fried goodies, including sausage, fish cake and prawn fritters, you eat loh bak by spearing chunks with a toothpick and plunging them in chilli sauce. The stalls along Tan Jetty serve a particularly good loh bak.

RELATED: VEGAN FOODIE? THESE 5 DESTINATIONS ARE PERFECT FOR YOU 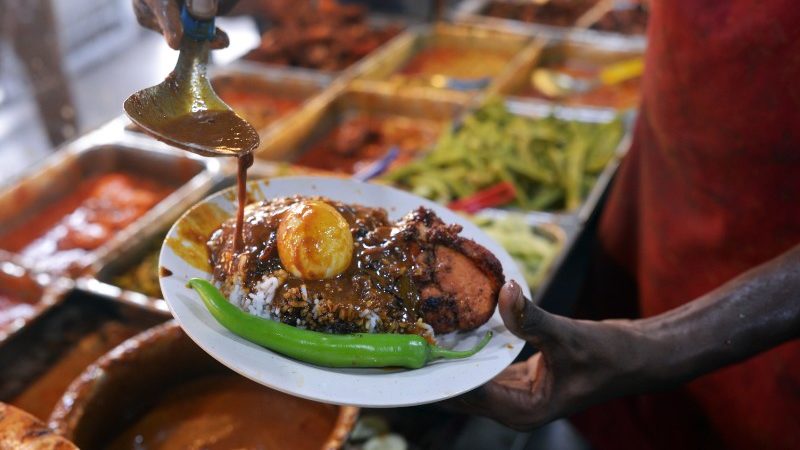 Another dish with a fascinating backstory, nasi kandar (literally ‘rice pole’) takes its name from the Indian-Muslim vendors who would carry pots of rice around Penang on poles balanced across their shoulders. It’s a gnarly looking dish of white rice, your choice of meat (the classic version comes with fried chicken), egg and vegetables (usually eggplant and orka). Stalls today serve it production line-style, so vegetarians can skip the meat. It’s the curry sauce that makes the nasi kandar, applied liberally according to a technique called banjir or ‘flooding’. Nasi Kandar Line Clear (which, ironically, always has queues out the door) is the best place to try it in Penang. 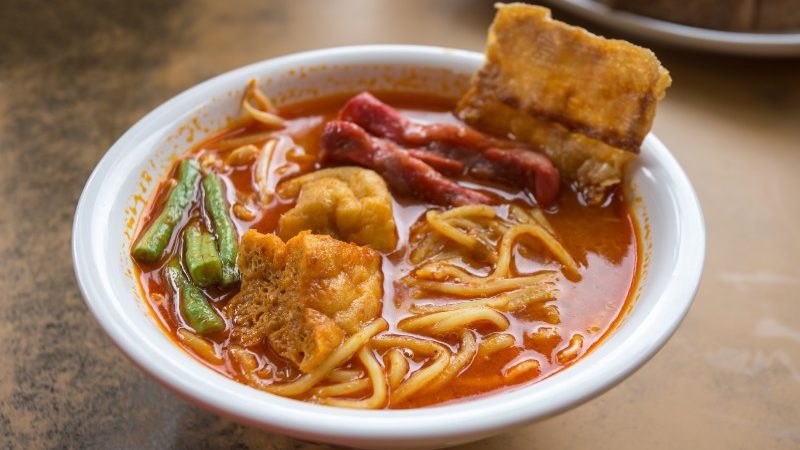 Humble mee, yellow egg noodles, is a staple Penang dish that transcends mealtimes and seasons. Favourites include wanton mee, noodles smothered in a sweet-savoury dark sauce and topped with thinly-sliced char siew pork and boiled pork wontons, and curry mee, noodles served with seafood, an aromatic gravy and sambal on the side. 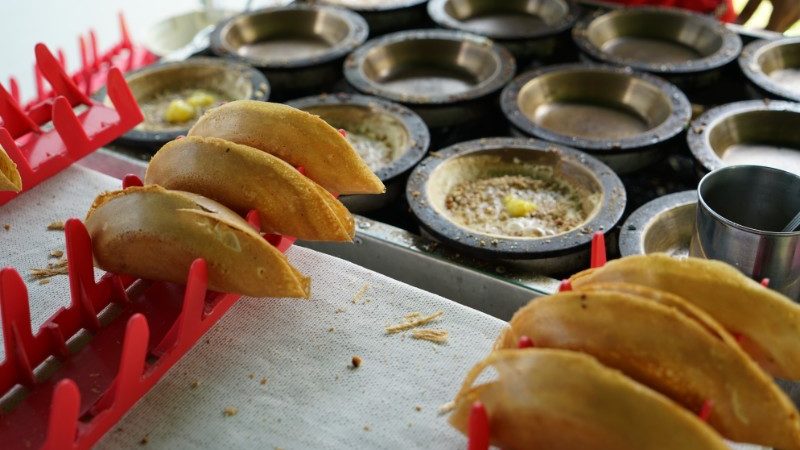 Penang’s answer to pancakes, apam balik is a traditional Nyonya snack that’s cooked to order on a hot griddle. A simple batter is topped with a buttery filling made from peanuts, brown sugar and margarine, sometimes with the addition of sweet corn. Perfect for a late breakfast or an afternoon pick-me-up, the thin version of apam balik is more popular in Penang, but the thick, airy version is equally delicious.

Hungry for *all* the food in Malaysia? Eat up a storm on a small group adventure now.