Home » Much more than a desert: A trip into the Sahara
FeaturesStories 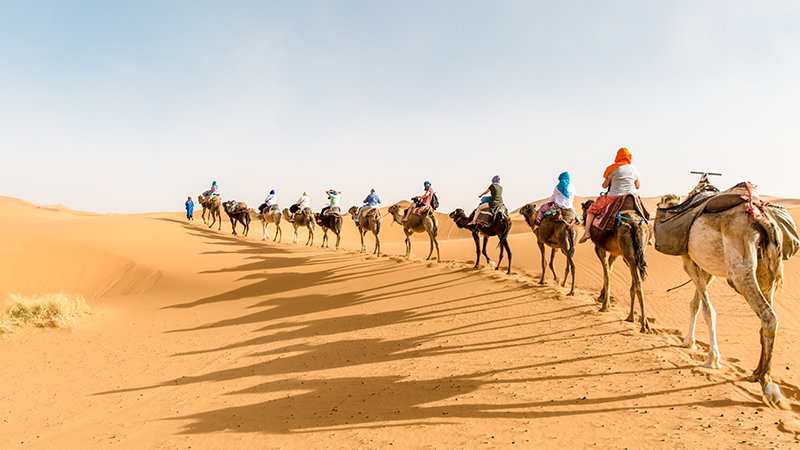 It’s hard to describe the feeling of approaching a desert to someone who has never seen one before. You can describe what you see; a drying of landscape, a browning of land and a slow disappearing of trees and shrubs and signs of life. Before, all of a sudden, the dunes appear. A sea of golden waves that appears to have no beginning and no end. You can show pictures and write words but portraying that feeling is harder. Perhaps it’s one of those things, like seeing the ocean for the first time, that you need to experience for yourself.

I’ve approached deserts before; Mongolia’s Gobi, India’s Thar, Egypt’s Western Desert. All were powerful and desolate and imposing. Yet still, the Sahara felt different. Perhaps it was the knowledge from our guide Mustafa, who had descended from nomads in the South of Morocco. He had told us tales about the wanderers who call the Sahara home. And the closer we got to the desert, the more excited he had become, slowly swapping his city clothes for a turban and floor length royal blue Gandora. His smile had grown wider, his confidence with the people we met along the way was contagious. 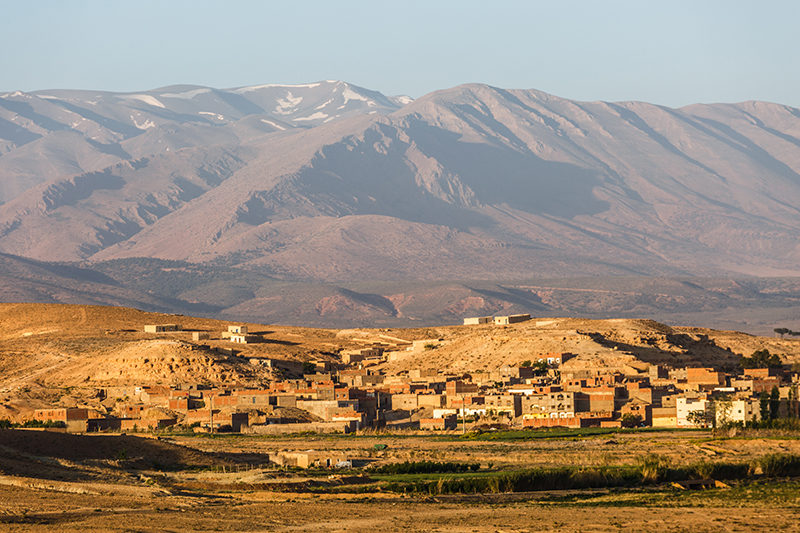 Our first glimpse of the desert was in Midelt. A town placed strategically between the Sahara Desert and the Atlas Mountains. After days of being in Morocco’s imperial cities, it feels wonderful to escape the bustling medinas and enter a world filled with Kasbah’s, olive groves and clear skies. We take an afternoon walk through a local village filled with shy children and their Berber families. The old Kasbah, a grand yet worn down sandcastle sits at one end of the village. It lies empty now,  instead, the families had rebuilt their homes across green fields and a small river. The new village still had the feeling of a Kasbah, sandy in colour and each winding corridor cooling from the midday sun. Children ran through the streets, finding a particular joy in trying on our sunglasses and having their picture taken with them on.

At sunrise, light floods the valley and shimmers on a faraway village I can see from the window of my room. Any sign of haze above the mountains had cleared and the snow topped peaks of the High Atlas stand majestic above the village. It’s the first view of the trip which has taken my breath away, but as we prepare to head into the Sahara, I have a feeling there will be many more to come. 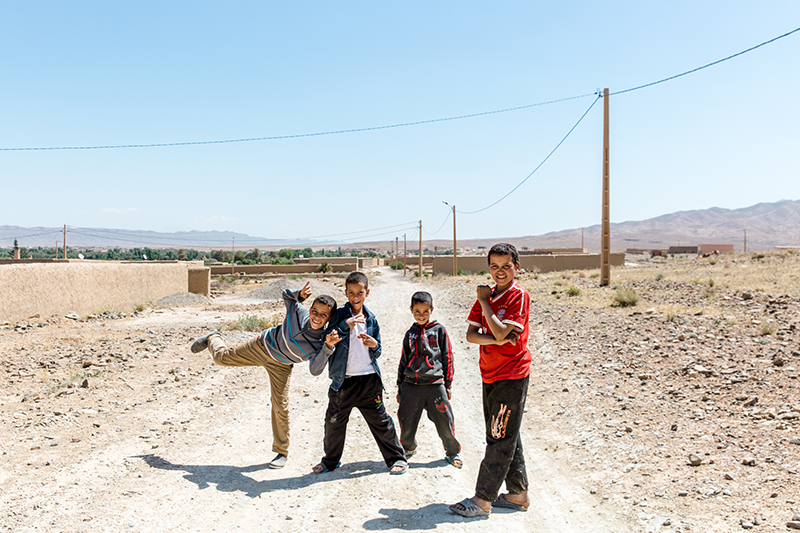 After a traditional breakfast of M’smmen pancakes, local cheeses, honey and of course a pot of sugary mint tea, we begin the drive to the dunes. Although Midelt already felt like a desert town, it turns out we have a long way to go before we reach Merzouga, where the sand dunes begin. We have seven hours of driving to go, but luckily the landscape changes enough throughout the day to keep my eyes constantly occupied.

Our first stop is a barren roadside tea shop. Where children pose on the dusty road to their village and cars drive ahead, disappearing into the wall of rock which will eventually become the Atlas Mountains. This time of year, the heat is manageable yet the sky is a constant bright blue that appears never-ending above the road. Mustafa plays Tinariwen through the speakers of our minibus, windows down and drifting into his home mindset. While I’ve heard Tinariwen before, here in their homelands, where local people speak the language they sing in, and the landscapes and beauty they sing of surround us, it gives the melody of the music a whole new meaning. 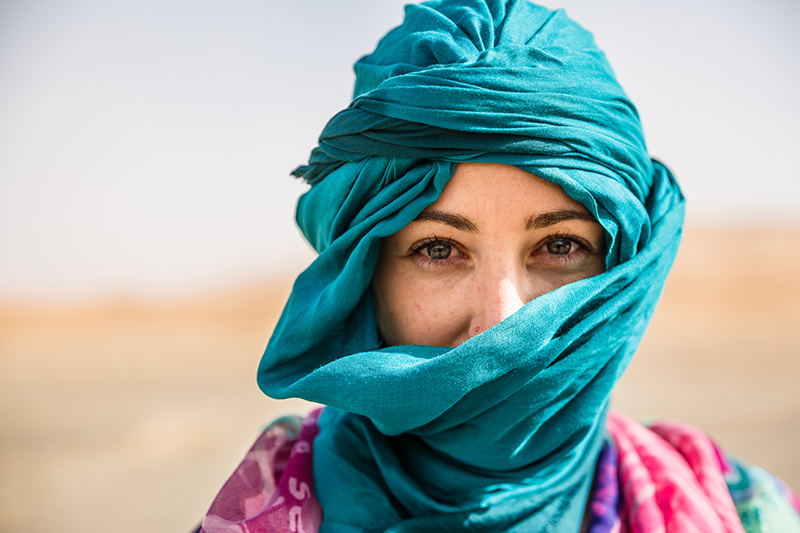 Oases are common in this part of Morocco, where the desert lets go of its unforgiving nature and gives water, palm trees and a place for life to settle. We stop at view points to find green blooming Oases in the valleys below. This is date heaven, and most of the nomadic families in this region have settled to cultivate this sweet fruit. Our lunch stop is in another Oasis Valley, at one of the most idyllic restaurants of the trip. It’s my first taste of Berber omelette, a local dish in the South of Morocco made up of eggs, tomatoes, onions and lashings of herbs. We leave behind the lush oasis valleys and the landscape once again becomes dry and barren. Our final stop is at a Berber shop, where a blue-turbaned man fits our heads with matching scarves. While we take shelter in his tin hut, a sandstorm takes over and the rainbow shawls blow violently in the wind. It’s a reminder of the power of the desert we are about to head into. 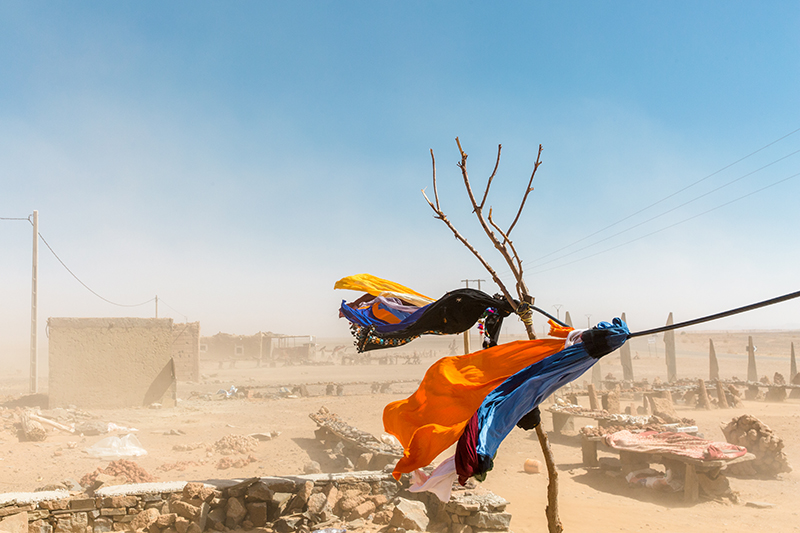 Merzouga is not much more than a few shabby hotels on the edge of the dunes. But of course, the main attraction lies beyond. Camelback is the main mode of transport to enter the dunes, and a row of 10 are majestically lined up for us. Our camel master is a nomad man who stands a few inches shorter than me. His face has aged from the harsh sun, yet his eyes are wild and warm, his comfort in the desert is undeniable. Like every other nomad we’ve met on the journey here, he proudly wears a silver necklace shaped into a Berber compass. Our guide Mustafa explains that people of the desert always know the time and direction based on the sun, stars and moon. While I whip my iPhone out to check which way the sun will set, the nature of these people is to understand the earth based on the sky. 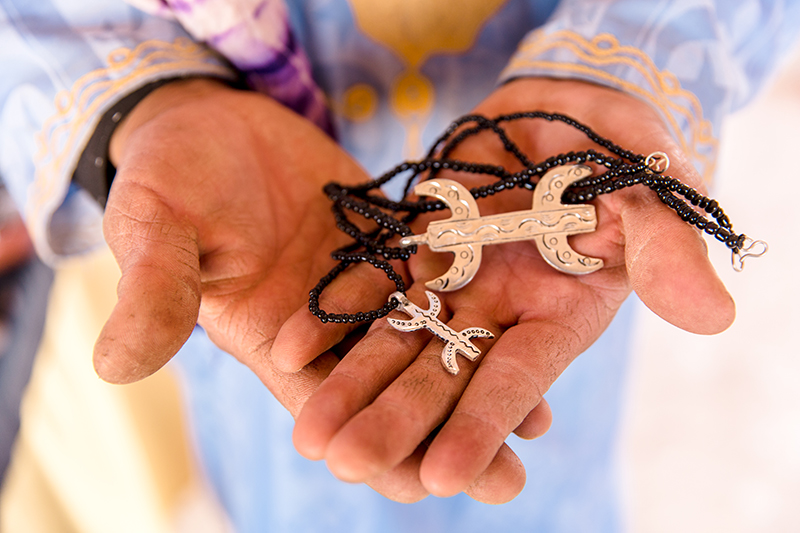 As the camels dip their hooves into the soft sand, the landscape of the Sahara opens up to us. Dunes roll into one another, merging and changing shape as the wind blows over each sand mountain. The setting sun creates long camel shaped shadows and in each direction, the sand appears a different shade of golden yellow. Although I’ve seen deserts before, nothing compares to the sheer scale of the Sahara, the dunes rise and fall so dramatically, and the sea of sand seems to go on for miles. 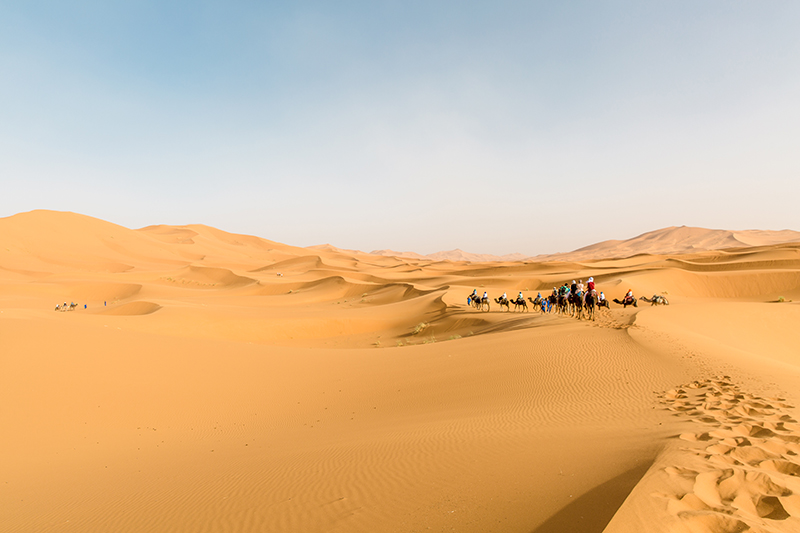 We reach our camp for the evening, a group of tents set around communal spaces where tea is served. As the sunsets, the stars come out to play, and after a dinner of smokey tagine, music is sung around a campfire, under blankets of stars. I fall asleep to the sound of drumming, yet awake in the middle of the night to peaceful silence and the milky way displayed above my head. Indeed, the desert is a place of contrasts, and there’s no greater example of that than out here in the Sahara, the world’s greatest. A place of solitude and intense heat. Yet also a place of music, stories, cultures and traditions. While a short trip might show vast landscapes and huge skies, it’s the people that call this place home which are the only ones who can truly understand the Sahara. The nomads who know what each of the stars in the milky way mean. The people that know which way to pray at sunrise and which way to walk the camels back to civilisation and phone signal. It was our short encounters with these people which had made the Sahara much more than any desert I had seen before. For now, I can attempt to relive that feeling through photographs, the melodies of Tinariwen and a silver Berber compass which hangs in my room.

Words and images by the lovely Annapurna Mellor, who travelled on our 15-day Best of Morocco tour. Check out her website and Instagram for some serious wanderlust inspo!

Want to discover the magic of the Sahara for youself? You need one of our small group Morocco itineraries!

Nice Information, and its really inspired for travel

Wow, Annapurna, what an amazing journey and article about it. The Sahara is somewhere where I have always wanted to go and it is still on my list of “want to do”s ! I’m going to keep this and read it regularly. I must only live about 30 miles from you, when I go to Manchester on Monday I shall think of what you have written and how far removed from central Manc it actually is.
Very best wishes for your future treks…
Alan