What a trip to Matsuyama taught me about Japanese hospitality 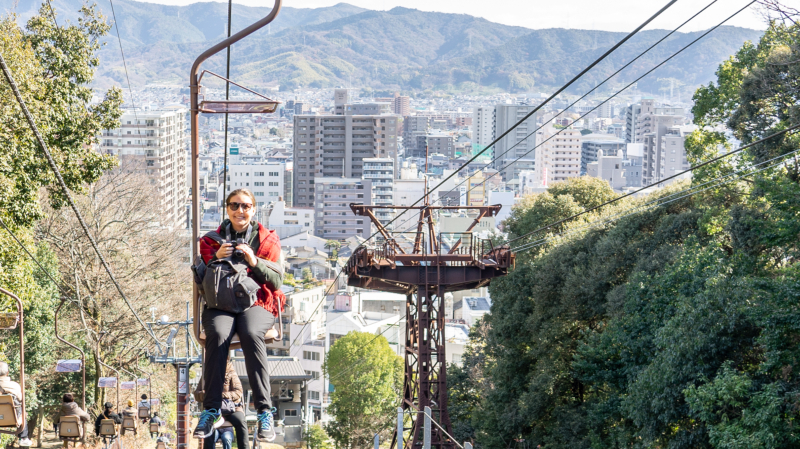 Sitting on the train that would soon be arriving in Matsuyama, I felt an unexpected tap on my shoulder. I turned to my side to see an outstretched hand gesturing for me to take its contents.

It was a bright orange, perfectly rounded mikan (mandarin), a present from a stranger wanting to welcome me to their city.

This was my first of many mikan on my trip to Ehime, one of Japan’s least-discovered but most endearing prefectures, where locals never seem to be actively buying mikan, but always have a steady supply tucked away in a bag or jacket lining.  You’ll find mandarin juice “on tap” at local souvenir stores and the airport, unexpected orange pieces in your sushi and, yes, strangers imparting the fruit as a gesture of hospitality.

While mikan is certainly one of Ehime’s most renowned symbols, local residents will be quick to correct the assumption that Ehime’s fruit mélange is limited only to the Satsuma mikan, their most famous commodity. “We are the citrus state,” they’ll say, from oranges to lemons, sweet to sour, and citrus fruits you’ve never heard of in between. 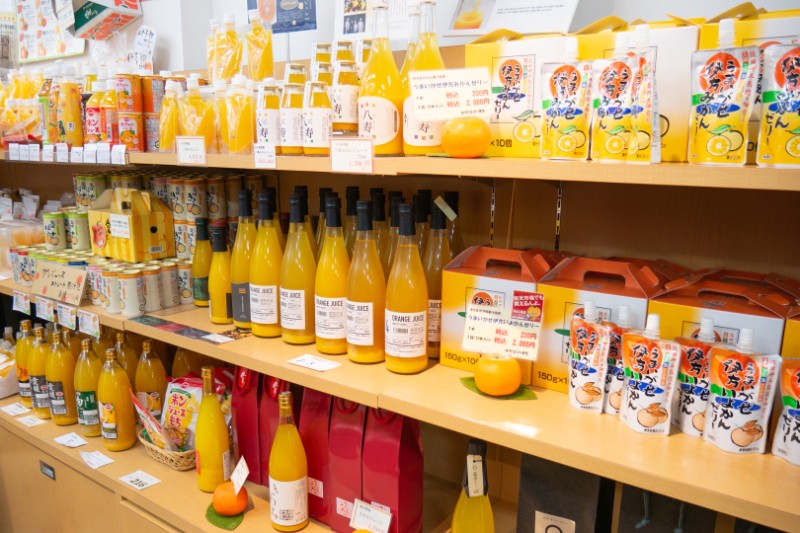 Some of the many citrus products available in Ehime Prefecture

Ehime is the kind of place that generates nostalgia for simpler times – when people spoke to their neighbours, social interaction was a chat with whomever you were seated next to, and exchanging foodstuffs was all part of community living.

Ehime’s capital city of Matsuyama exudes a yesteryear charm that is hard to miss, with its old-style trams trundling along the high street, and its traditional structures that retain a prominence in everyday local life, rather than simply acting as non-functioning remnants of past times.

People have been drawn to Matsuyama for centuries, starting with the founding of the city’s Dogo Onsen some three thousand years ago. What legends say began with a white crane putting its injured leg into the hot spring waters and subsequently being cured, now sees hundreds of people coming to bathe in its healing waters daily. 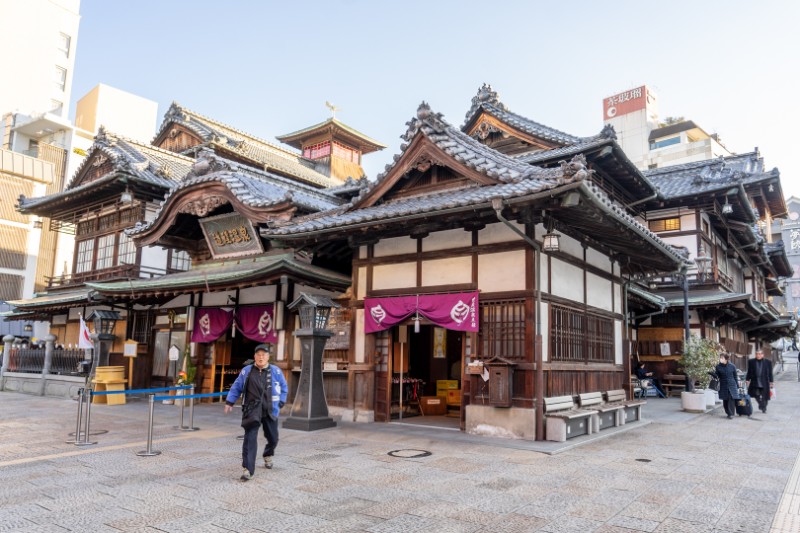 The main building’s impressive wooden façade along with the interior’s narrow corridors, creaking floorboards and steep staircases, and the constant pitter-patter of visitors shuffling down the halls barefoot in yukata robes, instantly transports you to another world. If you feel like you’re stepped into an anime, it’s because you have entered the inspiration for one. It was in fact this very building that moulded Hayao Miyazaki’s acclaimed Studio Ghibli production ‘Spirited Away’.

Overlooking the city is Matsuyama Castle. Elegantly poised atop a hill, it stands as one of only twelve castles in the country, out of more than three hundred, that retains its original keep. 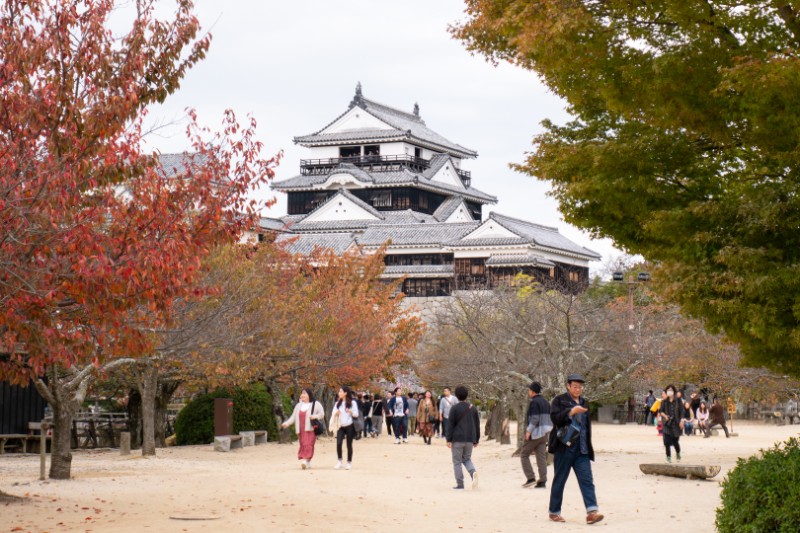 Interestingly, no one ever lived there and it was built as a last line of defense in battle. In a way it still feels like the city could rush there in a time of crisis and find safety in its elaborate and savvy design, clever and strong even by today’s standards.

The chairlift to the castle grounds brings far more joy than you’d imagine. Seated in single plastic classroom-esque chairs, with legs dangling below, it’s quite the thrilling ride. Moving past others going in the opposite direction just creates another opportunity for smiles to be exchanged and a few more eager locals to excitedly wave and say “Welcome to Japan” to visitors.

READ MORE: 6 (OTHER) UNDERRATED SPOTS YOU SHOULD VISIT IN JAPAN

The chairlift to Matsuyama Castle

Over at JR Matsuyama train station, an older woman off to go shopping for the day hears English and excitedly turns around on her platform seat to chat. A few sentences in it was clear her English vocabulary was limited, but said she was trying to learn so she could talk to new foreign residents living in her community and to prove a point to her granddaughter that if her 76-year-old granny can learn, she should quit complaining about having to study it at school!

On weekends and holidays, a special dining and sightseeing train known as the Iyonada Monogatari chugs along at a leisurely pace up and down a section of Ehime’s northern coastline, allowing passengers to have a meal or a coffee while being captivated by the calming azure-hued sea views. 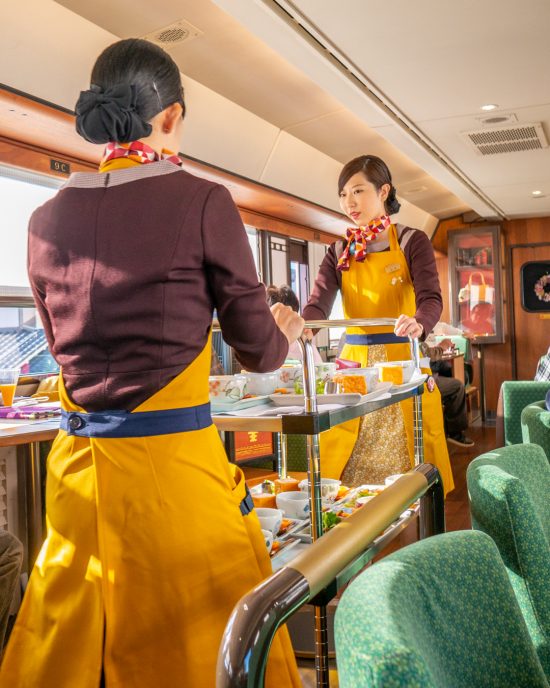 The train emanates distinct Meiji era vibes – old-timey Western design with some Japanese twists. The Iyonada Monogatari takes you back to a period when train travel was an event and an occasion for dressing in your finest. The staff are also sure to complete this time portal with vintage uniforms adorned with mustard aprons and silk scarves.

As the train moved through small coastal villages, locals had assembled along the roadside, on train platforms and baseball fields especially for the enjoyment of passengers. Villagers of all ages were waving, holding up signs and flowers, and some were even dressed in costume. A source of pride for the local community, apparently this is a kind, welcoming gesture that happens every time the Iyonada Monogatari passes by. 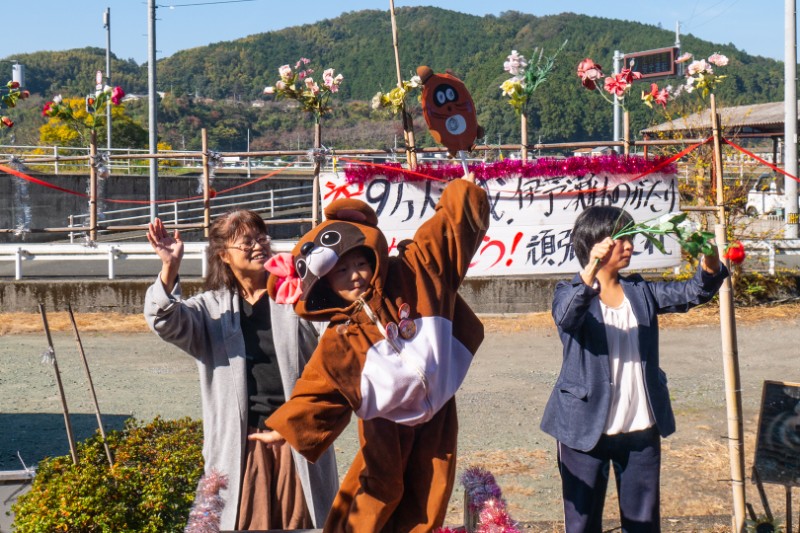 At one point, there’s a brief stop for photos at Shimonada Station, the second closest train station to the sea in Japan.

Local residents who had come to greet the train noticed me instantly and came running over, asking me where I’m from and welcoming me to their part of Japan, while offering their picture-taking assistance and, of course, a mikan.

READ MORE: WHY TRAIN TRAVEL IS AN EXPERIENCE YOU CAN’T MISS IN JAPAN 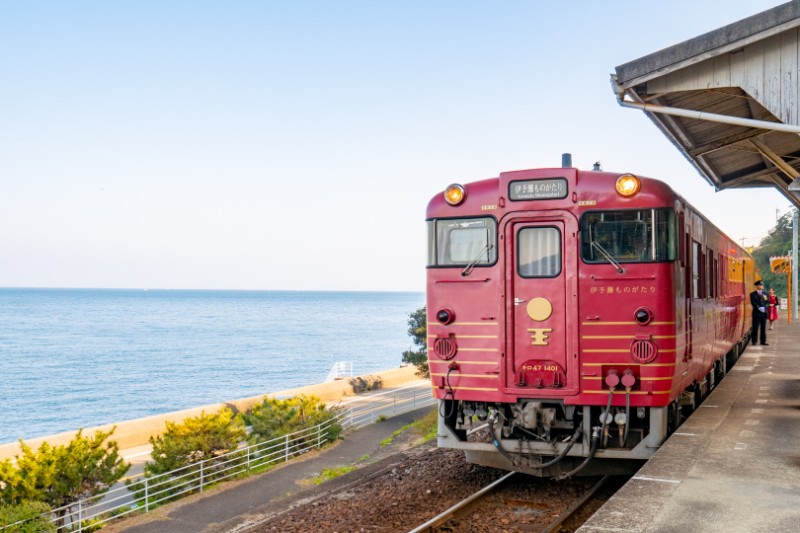 Shimonada Station, a station by the sea

Back at Matsuyama Station, the older woman I had spoken to earlier was coincidentally also returning at the same time. She eagerly smiled and waved, and declared, “I’m back!” before enquiring about my day as if we were old friends.

Perhaps that’s the part of a trip to Matsuyama that sticks with you most. Alongside the city’s glorious castle and incredible hot springs, you feel part of the community’s intricately woven fabric right away. You sit and chat, and return to a period when making time for human interaction really was as simple as turning to the person next to you. And each mikan that results becomes a beautiful reminder about just how warm this world can truly be.

Ready to visit gorgeous Matsuyama for yourself? Spend time getting to know it on Intrepid’s Southern Japan Experience or Ultimate Japan trip.

(All images courtesy of Jessica Korteman.)

Matsuyama is a really great city. Must surely visit anyone. Thanks.