Home » More than momos: A guide to Nepali cuisine
Food

More than momos: A guide to Nepali cuisine 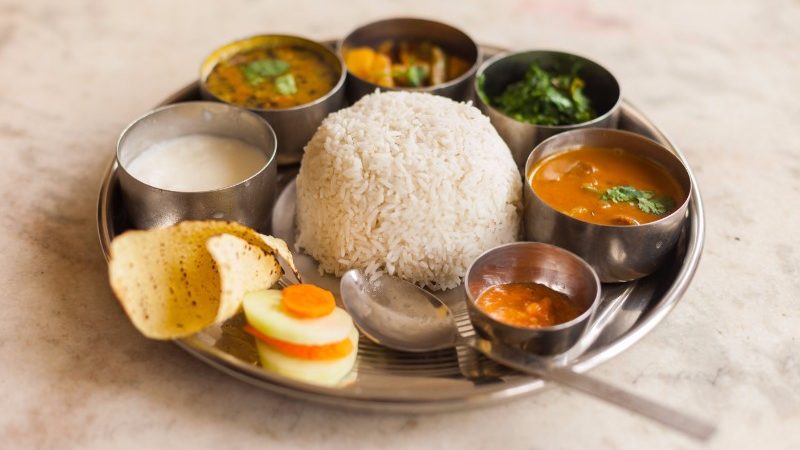 If you walk down any street in Thamel, the tourist district of Kathmandu, chances are you’ll find a ‘Dal Bhat Power 24 Hour’ t-shirt for sale. There’s truth to the slogan.

Dal bhat – a traditional dish of lentil soup and rice – is able to sustain the energy of everyday Nepalis who often eat it three times a day in between their work and play. It’s also the staple diet for trekkers and sherpas, providing them with enough body-fuel to tackle the region’s highest peaks.

If you ask anyone about Nepali food, they’re sure to mention this moreish meal… but there are plenty of other delectable delights in this landlocked mountainous country. Here are eight of our favourites:

It kind of looks like a pizza and, just like the Italian dish, can be made to order to include all of your favourite toppings. Chatamari is a thin crepe, usually made from rice flour. Traditionally it’s covered with spiced minced meat and vegetables like onions, tomatoes and chillies. It’s one of the most popular dishes for the Newari – the people of the Kathmandu Valley and surrounding areas – and is eaten as a snack or appetizer. You can order your chatamaris open-faced or folded over, like a taco. 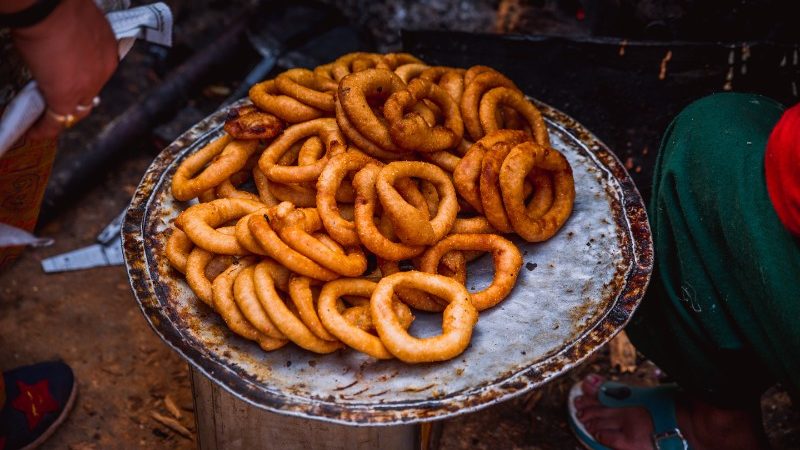 If you like doughnuts, you’ll love sel roti. These traditional treats are made from sweetened rice flour that has been deep-fried in a thin ring-shape and then flavoured with bananas, cloves or cardamom. Nepalis often take them as gifts to family and friends for weddings, birthdays and other celebrations.

The best way to sample the spices, flavours and textures of Newari cuisine is to try samay baji. This traditional set of dishes is generally served up during religious festivals and celebrations; the ingredients are believed to bring good luck, health and financial wealth to those who participate in the feast. So what can you expect to find on your plate? Some beaten or puffed rice, a lentil pancake, spiced potato salad, stir-fried spinach, black beans and barbecued buffalo meat, as well as pickled vegetables with fresh ginger. It can also be served with dried fish or dried fruits. 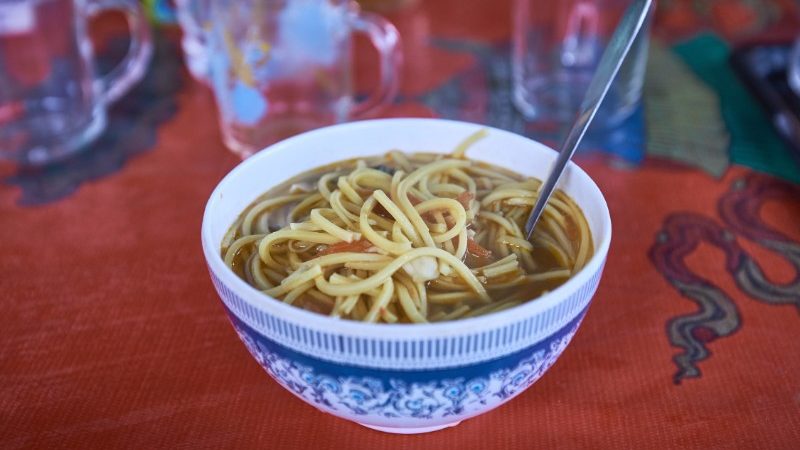 Thukpa originated in eastern Tibet and has become a regular dish on the menu in Nepal, particularly in Tibetan-populated areas like Boudhanath. It’s a type of noodle soup and it comes in many varieties depending on where in the Himalayas it’s being dished up. In Nepal, the soup can be quite spicy – flavoured with garam masala – but you’ll also find plenty of restaurants serving a milder variety, which is more like a chicken noodle soup.

Imagine a fluffy lentil pancake and you’ll have some idea about wo. These savoury treats are often served alongside dishes like samay baji, but are also a popular roadside snack. They’re made with black or green lentils that have been soaked overnight, then ground, seasoned, shaped into patties and fried. They can be topped with meat, a fried egg or vegetables. 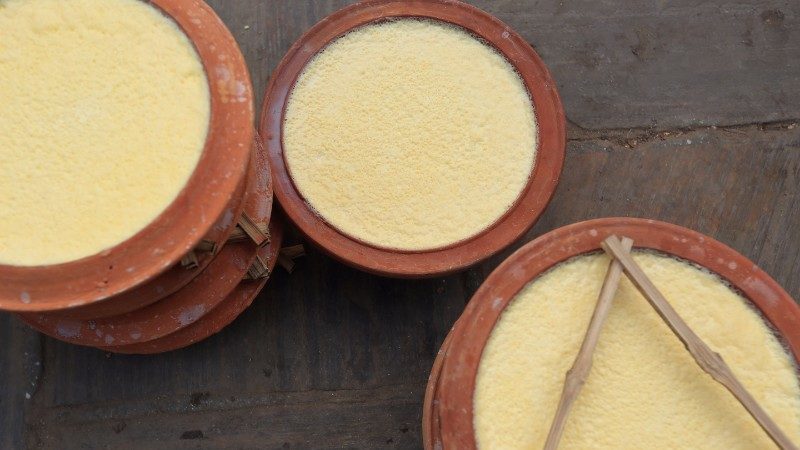 Juju Dhau translates to ‘king yoghurt’ and it’s a speciality in the ancient city of Bhaktapur. Here you’ll find vendors selling this rich creamy dessert in palm-sized clay dishes. It is made from buffalo milk – although these days cow’s milk is also used. The mixture is sweetened, a bacterial culture added, then it’s poured into pots and left to ferment. The result is a thick, smooth dessert that is a must try when you visit Bhaktapur!

Yomari look a little bit like little doughy fish but there’s nothing salty about these dumplings. They are made from rice flour and stuffed with a sweet filling – usually containing sesame seeds, molasses, shredded coconut or sugar cane. These steamed treats are considered a delicacy in Nepal and play a significant role in religious festivals (including the Yomari Punhi festival, which marks the end of the rice harvest). 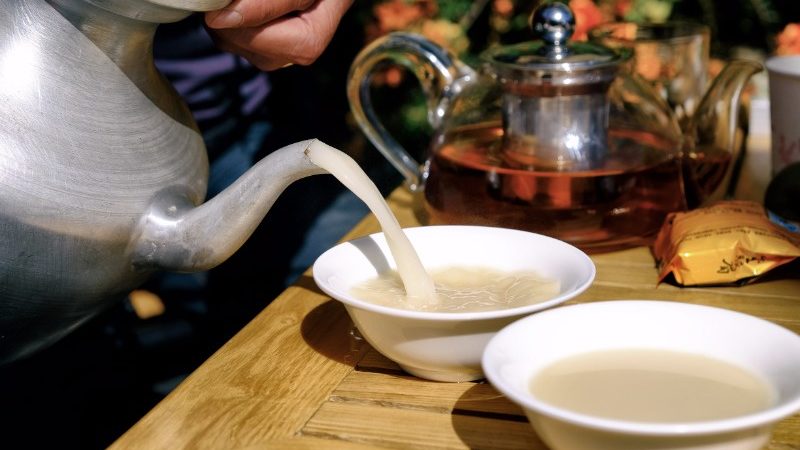 Apart from thukpa and momos, another delicacy that’s worth sampling while you’re in Nepal is salty butter tea. Sherpas drink this tea several times a day for energy and to help them stay warm in the mountains. It’s believed to assist with altitude sickness, which is why many trekkers take to drinking this brew when they are in the Himalayas. The tea is made with yak butter, milk, salt and special tea leaves.

Momos are delicious, but so are all these other Nepali treats! Eat ’em all on a trip around Nepal with Intrepid.

Feature image (of a moreish dal bhat) via Shutterstock.

yes, Nepali food is the best food in the world, my favorite is Juju Dhau. don’t forget to eat Juju Dhau during your Nepal trip.

Ange, thanks for this – I’m visiting Nepal in 3 weeks time and hope to try some of these dishes.