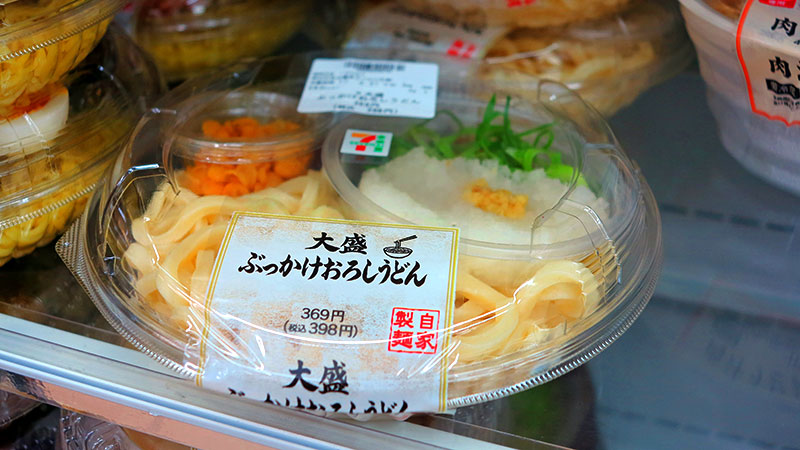 Convenience store fare? Food from vending machines? Isn’t travel all about eating authentic street food, finding hole-in-the-wall taco joints and dining in tiny eateries that have been in the same family for generations? Well… yes, if you want it to be. But isn’t travel also about embracing what each country does best?

In Japan, you can sit down to enjoy an elaborate, multi-course dining experience known as kaiseki. You can also pay top dollar to have a drink and snack at the hotel bar where Lost in Translation was filmed (“For relaxing times, make it Suntory time”). But you can also embrace Japan’s commitment to giving people access to food and drink options around the clock by spending some time checking out the heady convenience store and vending machine food scene.

Yes, this is a thing in Japan and it’s a real boon for budget-conscious travellers who want to eat well but not invoke the wrath of the credit card gods.

Go on a Real Food Adventure in Japan >

Convenience store food of the world

Convenience store food is questionable in most countries, but as most travellers know sometimes you just have to bite the bullet and take what you can get (especially if you’re on a road trip and are hundreds of miles from your next stop).

They might not exactly be Michelin-star standard, but each country adds a dash of regional flair to their convenience store menus. USA has the Big Gulp (a huge bucket of coma-inducing soda), Australia’s outback convenience stores showcase culinary delights such as kangaroo jerky and Chiko Rolls, while south-east Asia’s convenience stores stock an inordinate amount of prepacked Milo drinks and ready-to-drink iced coffees made with sweetened condensed milk.

But sitting at the absolute apex of the convenience store food chain is Japan. The spiritual homeland of 7-Eleven (there are more than 17,000 outlets in Japan) provides a dazzling array of high quality, low cost snacks, drinks and meals. Covering the whole gamut of flavour options from traditional Japanese fare to Western-fusion flavours, Japan’s convenience store menus have broad appeal. 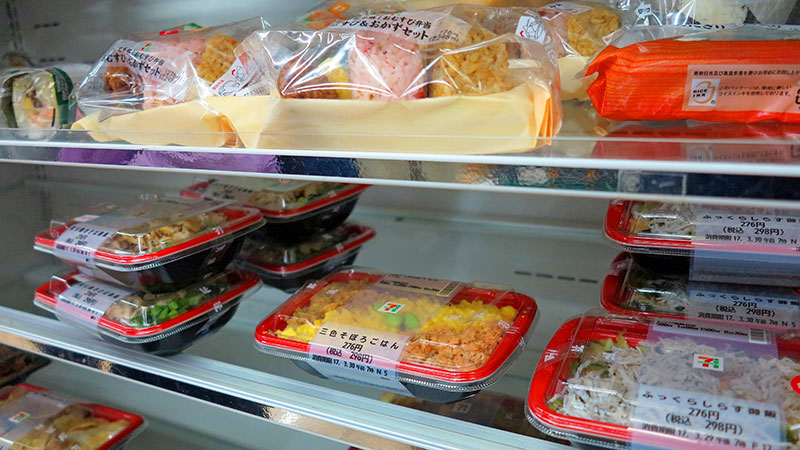 There are perfectly packaged rice balls (onigiri) containing ingredients like salmon, tuna, roe, mayo and egg. Cheap, plentiful, tasty and easy to throw into your bag, convenience store rice balls (that are actually shaped like triangles) are the ultimate grab ‘n’ go style of snack. There’s blemish-free white bread sandwiches with all sorts of fillings from the traditional (egg) to the bizarre (strawberry sandwich anyone?). There’s also plenty of deep-fried goodness with fishcakes, chicken nuggets and other oily delights available for when hunger strikes you down. There are also pre-made bowls of ramen, spaghetti, meatballs, salads, katsu, noodles and more.

13 Japanese snacks you have to try >
Osaka the best city in Japan for foodies? >

Want some convenience store dessert? Behind the automatic doors of FamilyMart or 7-Eleven, Japan’s legendary KitKat scene is alive and kicking, with new flavours available each week (pro-tip: stock up on sake-flavoured KitKats while you can).

Love soft serve ice cream? When travelling in Japan there’s no need to find a machine that dispenses soft serve when convenience stores have ready-made, perfectly-formed soft serve cones stocked in the freezer section. Protected by a plastic shield that ensures the layered swirls of dairy remain uncompromised, this is genius-level stuff!

In most other countries, eating or drinking foodstuffs procured from a vending machine has shameful connotations. It’s the type of desperate act you complete at an airport when you’re so hungry you start experiencing hallucinations.

But as with convenience stores, Japan’s vending machines are in another league, dispensing everything from bowls of ready-made ramen to bottles of sake and chicken dinners.

Most common are the drink vending machines. Dispensing both hot and cold drinks, these miracle machines can be found everywhere from train stations to cemeteries (because paying your respects to your ancestors is a thirsty business). 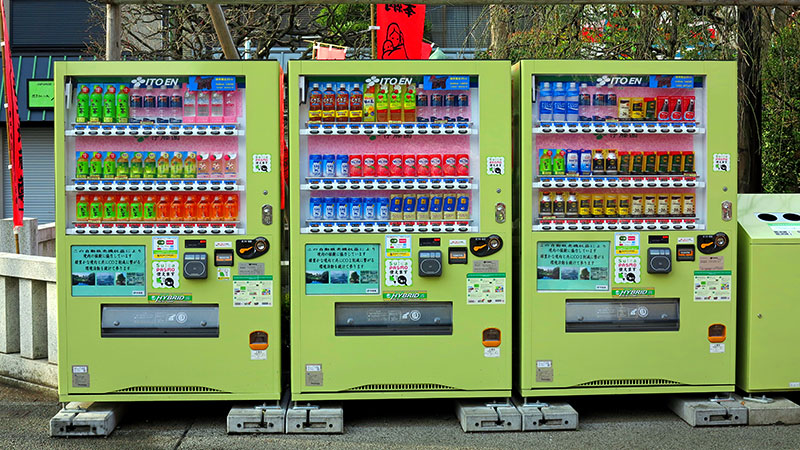 From one, single vending machine you can get a carton of strawberry milk, a warm coffee, a cold coffee, a cold bottle of water, a hot green tea, a cold iced tea and so on and so forth.

If the thought of eating and drinking from vending machines isn’t your thing, then there are plenty of other ways to be a part of Japan’s vending machine scene. With everything from ladies underwear to pyjamas for your smartphone and bonnets for your cat for sale via one of Japan’s 5.5 million vending machines, there really is something for absolutely everyone. Yes, even you.

Sounds delicious! But… there’s a great source of trash involved here… Any way to enjoy it all without packaging or having to throw so much away?

Japan are really good about recycling! It’s all sorted well. Still a shame there’s so much plastic involved but it makes you feel a little better that you know they’re definitely doing something about it