Home » How to eat like a local in Sri Lanka
Food

How to eat like a local in Sri Lanka 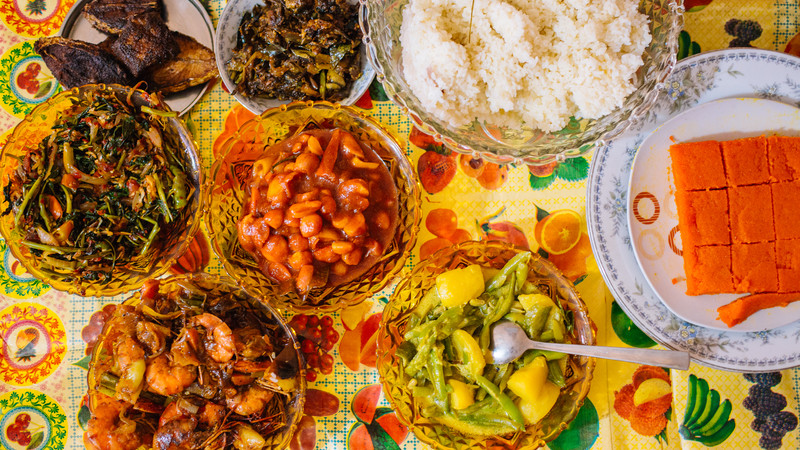 To be honest, my first encounter with Sri Lankan cuisine was not quite what I was expecting. My partner and I had just arrived at a heritage bungalow, high in Sri Lanka’s up country, for a couple of nights of R&R before joining a Real Food Adventure with Intrepid.

We were welcomed by the manager, who offered us afternoon tea. As someone who is constantly hungry (I plan most of my daily activities around when I’m likely to get peckish), I immediately accepted. After enjoying many Sri Lankan meals with a friend’s family at home in Melbourne, my mouth was watering at the prospect of sitting down to the real deal.

I squinted as he approached, carrying a three-tiered silver tray and a pot of tea across the lawn; what was that white fluffy-looking delicacy on the bottom layer of the tray? Were they ‘short eats’, Sri Lanka’s version of finger food that I’d heard so much about? I hoped so. Hang on. Was that… a pile of chocolate chip cookies on the top? 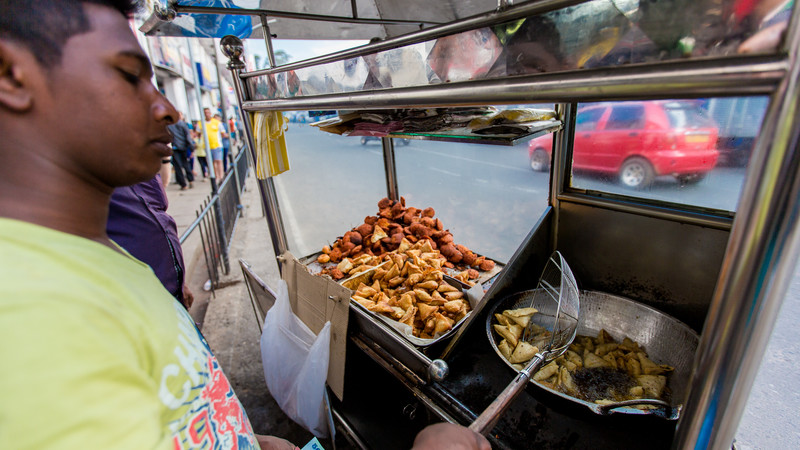 As the tray was set on the table and the tea poured, the contents of our afternoon snack suddenly became clear. I was right about the cookies. But the buns? They were mini hamburger rolls, stuffed with raw spring onion, a slice of tomato and generously drizzled with tomato sauce. This was not the traditional Sri Lankan cuisine I was anticipating.

Dinner was a similar affair. Macaroni cheese, with undertones of mayonnaise; a strange baked vegetable dish, cooked in the same cheesy, eggy sauce; and a loaf of white supermarket bread. Thinly sliced. Quite stale. Hmm.

Our barely touched plates were cleared and our host asked what we’d like to eat the following day. Pasta? Burgers? Nachos? I realised the great Sri Lankan foodie adventure I’d hoped for seemed to be evaporating right before my eyes. If we’d been characters in a cartoon, steam would have shot out of my ears and my eyes would have turned into spinning black spirals of crazy.

“We’d actually really like to eat what you eat,” I said, swatting an animated bluebird away from my face.

“Curry?!” he replied, as though this was the most ridiculous request he’d ever received. “Dhal? And roti??”

“Well, what about breakfast? Bacon and eggs… or hoppers?” This felt like a test.

“Hoppers! Yes!!” we both exclaimed. 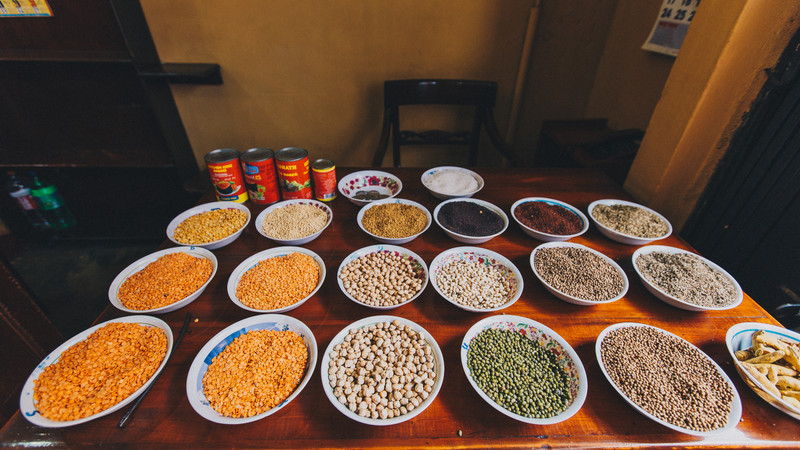 Early the next morning, out it all came. Two authentic egg hoppers – crisp, bowl-shaped pancakes with an egg cradled in the bottom – and a tray of small dishes filled with curries, sauces and chutneys; fish curry, chicken curry, a fragrant dhal; a sticky dark eggplant pickle, flavoured with vinegar, cloves and chilli; coconut sambal, and more. Sipping freshly brewed tea and spooning more and more of the flavoursome treats atop the egg, my partner and I smiled at each other like Lady and the Tramp over a plate of spaghetti. Now this was more like it.

After a bumpy start, we joined up with our food tour and became, well, hooked on everything this tea-scented land had to offer. On the road to Dambulla we snacked on savoury pan rolls, a thin pancake rolled around minced vegetables, fish and spices, then deep fried (Sri Lanka’s answer to a Chinese egg roll) as the busy streets of Negombo gave way to fragrant cinnamon groves, swaying palms, and emerald green fields. 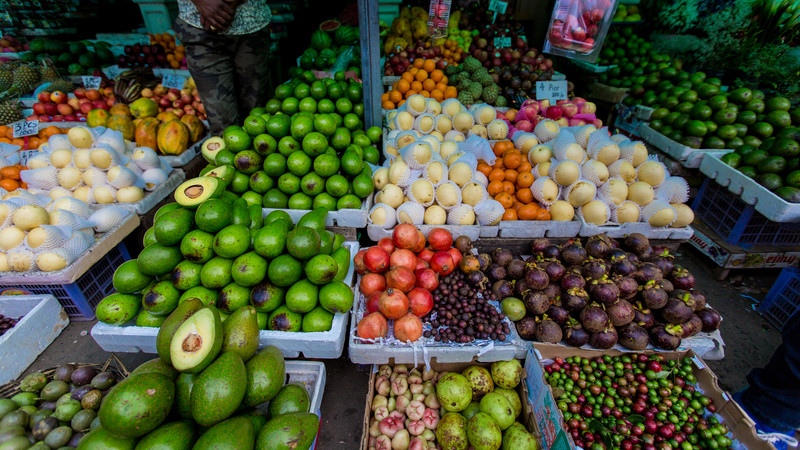 Colourful fruit and vegetables at the market. Image by Ryan Bolton.

In Kandy, we worked up a serious appetite wandering around the Temple of the Tooth – where Buddha’s sacred molar is housed in a gold case – exploring a local spice garden, and visiting a family for a cooking class, where we learned the delicious art of making string hoppers, chicken curry, the perfect yellow dhal and kokis, a crispy sweet biscuit made from rice flour and coconut milk. That night our group enjoyed a dinner of pumpkin and fenugreek curry, served alongside rice and fresh-cooked coconut roti.

In Mirissa, our guide took us to the beach, where we watched fishermen perched on stilts in the ocean, ready to haul in their catch of the day. Afterwards, we cracked the claws of enormous sea crabs, which had been simmering in fennel seeds, fresh chilli, turmeric, tamarind and coconut milk.

Breakfast each day was a relative palate cleanser of sweet tropical fruits and coconut water, but only when we could resist the allure of the egg hopper (which was rare). And, of course, tea – served with every meal.

So, what did I learn after 12 days of eating and drinking my way across the country? Sri Lankan food is not for the faint-hearted, nor is it for the picky eater. Expect fiery curries laden with chilli that’ll put hairs on the chests of all who go back for seconds; deep-fried fritters (called vadai) seasoned with fragrant spices, consumed with an icy Lion Beer (preferably on a beach under a palm tree outside Galle fort). Kotthu roti, a chopped concoction of fried roti bread, vegetables, meat and egg, is best enjoyed while wandering through the busy streets of Colombo (it’s not known as Sri Lanka’s favourite street food for nothing). Lovers of spice, seafood and coconut will adore this diverse, and delicious, island nation. And if anyone tries to offer you nachos, just ask for short eats instead.

I am going at Christmas time. What a shame I was recently diagnosed with coeliac disease, and a lot of what you describe will likely contain wheat. I guess I will be picking and choosing very carefully, and hopefully getting by on just fresh fruit, vegetables and the meat. Pancake? No. Roti? No (unless it’s made with unadulterated rice flour). Dhal? Should be ok. I hate being that fussy eater, but now I have no choice.

How exciting! There’s still LOTS of great food you can enjoy – exotic fruits, coconut curries with rice (just make sure it’s been thickened with legume flour, not wheat flour), vegetables fried rice, spicy roasted nuts and chickpeas, string hoppers (made from rice flour) with coconut sambal… Are you travelling on a group tour? Make sure you chat to your leader about it when your trip starts so they know to be extra careful with your meals.

Perfect fit! for someone like me who’s fascination is reading blogs . I can mostly relate. Keep sending them please!