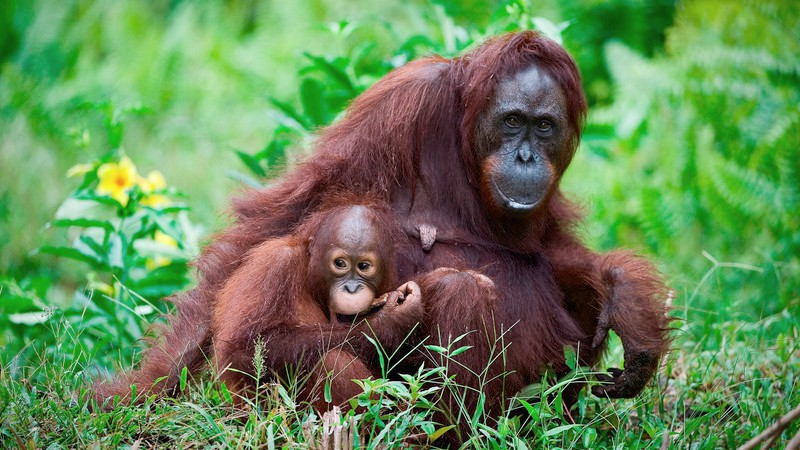 Sabah is a state situated on the northern tip of Borneo, Malaysia. It’s home to not only 3.5 million people, but also to a diverse array of animal and plant species. Forests and protected areas make up over half of Sabah.

However, due to extensive logging, the forests of Sabah have been severely reduced. The demand for timber, raw materials and the conversion of forests into agricultural land and palm oil plantations means that Sabah has depleted almost all of its old-growth forests.

As a result, there is now a strong push towards conservation efforts in Sabah. The most famous project is at the Sepilok Orangutan Rehabilitation Centre. Covering 40 square kilometres of the Kabili-Sepilok Forest Reserve, the centre rehabilitates orphaned and injured orangutans, with the goal to eventually return them to the wild. And here’s the great thing – as a traveller, you can visit!

Seeing the rehabilitation of orangutans in Sepilok

Before entering the sanctuary, I make use of the free lockers to store my bag. Cheeky orangutans have been known to snatch bags and loose items from unsuspecting visitors.

A walking path snakes down to the feeding area where the orangutans (and other monkeys looking for a free meal) congregate twice a day at 10am and 3pm. Your ticket gives you access to both feedings. 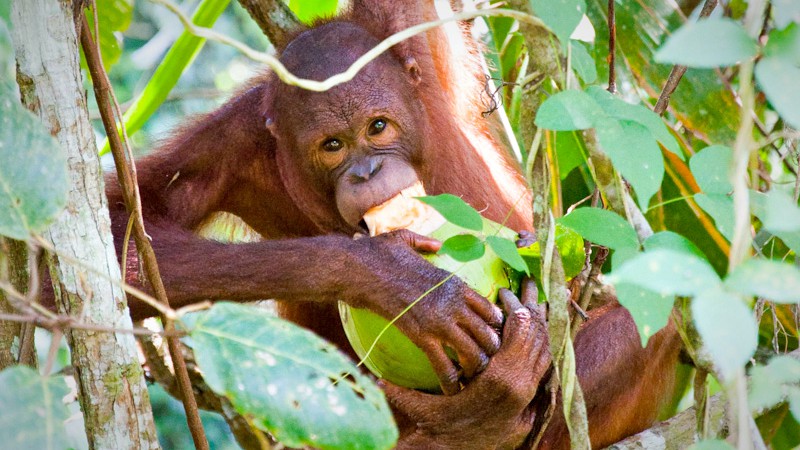 Hanging out in the trees at the Sepilok Rehabilitation Centre. Image c/o CC Hua.

As the clock nears 10am, the trees begin to shake, the ropes start to sway and I spy the first flashes of orange between the branches. It’s a thrilling moment. A staff member arrives and commences the feeding. The orangutans are only fed bananas – the monotony of the food available at the platform forces them to forage for more variety in their diet out in the nature reserve and trains them for their return to the wild.

Nearby is the outdoor nursery. Young orangutans between six and nine years old are kept here and taught basic skills to keep them alive in the wild.

One young orangutan is being taught to traverse the ropes by a trainer. Frustrated, he swats away his guardian’s guiding hands and attempts the climb alone. He manages a few swings before crashing down to the ground. I am delighted to watch them play and notice how similarly they behave to human children.

With less than 105,000 Bornean orangutans left in the wild, the Sepilok Sanctuary provides much-needed protection of Borneo’s “Men of the Forest”. It’s a special place to visit.

READ MORE ABOUT HOW YOU CAN HELP PROTECT ORANGUTANS

The conservation efforts in Sabah are not just limited to land. The region’s turtle conservation program is the oldest in the world. Three islands – Selingaan, Little Bakkungan and Gulisaan – are collectively known as Turtle Islands Park. Green turtles and Hawksbill turtles lay their eggs here on the shores.

We catch a 90-minute boat ride from Sandakan to Selingaan, the only island in the park with accommodation. If you want to see a turtle laying eggs, you’ve got to stay the night. 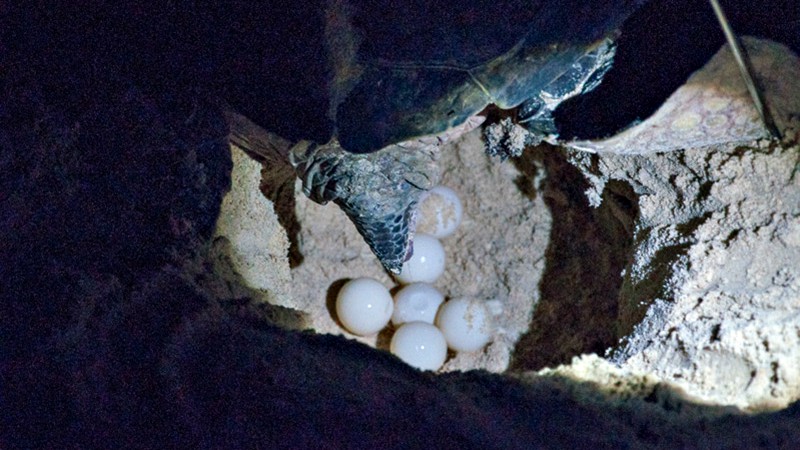 The turtle lays her eggs in deep holes in the sand. Image c/o CC Hua.

The turtles come ashore every evening to lay eggs, and can number up to 50 at a time during peak season (between July and October). The beaches are vacated each evening so as not to disturb them.

After dinner, everyone hangs around the dining room waiting. The hatching doesn’t follow a fixed schedule, so the wait can theoretically last from sunset to sunrise, but after about two hours the ranger appears in the doorway and yells, “Turtle Time!” We head down to the beach in hushed excitement.

While a turtle is ashore, the rangers are vigilant and protective. The creature is measured and examined, and first-time turtles to the island are tagged. During the egg-laying, a mother goes into a trance-like state, seemingly oblivious to the people around her.

The eggs, as they roll out, have a soft and leathery appearance. They’re transplanted to the hatchery and buried in holes in the sand measuring 60-75 centimetres deep. These chambers are exactly like what a turtle would dig, but protected, so predators aren’t able to dig them up.

After this process, we witness the turtle hatchlings make their way to the sea – releasing them at night increases their chances of survival. Watching these tiny, adorable creatures scurry towards the ocean is a heart-swelling moment. God speed little ones! 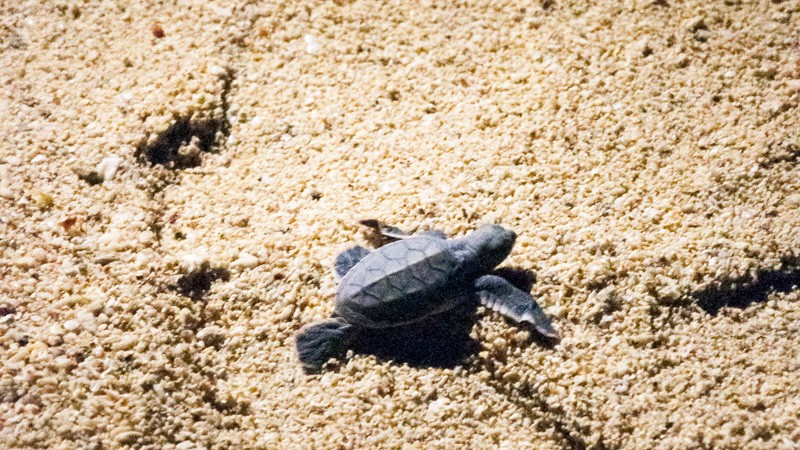 I’m always wary of animal-related tourism. I want to know the animals I see are not being exploited, but it’s not always easy to tell which seemingly well-meaning organisation is the right one to support. Intrepid have thoroughly researched and vetted all the places they visit, so I rest soundly in the knowledge that my travel dollars are supporting a truly worthy cause.

By visiting conservation programs in Sabah, you’ll not only gain a valuable insight into the lives of some amazing animals, you’ll also contribute to the protection of the unique wildlife and biodiversity found here.

Want to learn more about the conservation of orangutans and turtles in Borneo? Experience both of the above on Intrepid’s 12-day Sabah Adventure. 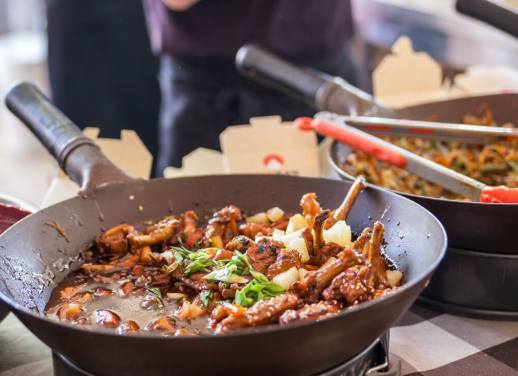 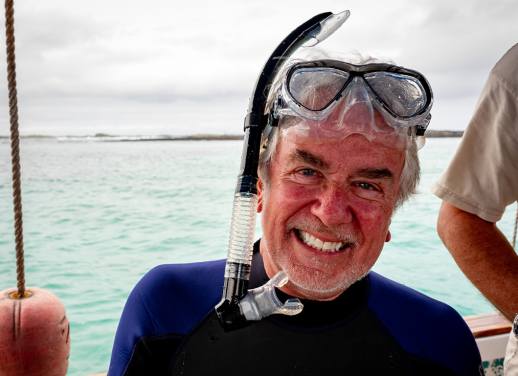 Based in Melbourne, Australia, CC is a designer/photographer with a penchant for adventure. She travels the globe as often as she can in search of the weirdest things to eat. You can find her on Instagram @invadercee.

Orangutans are “Epic”
They Should be cared for