Home » Why Ethiopia is Africa’s next must-visit destination
Features

Why Ethiopia is Africa’s next must-visit destination 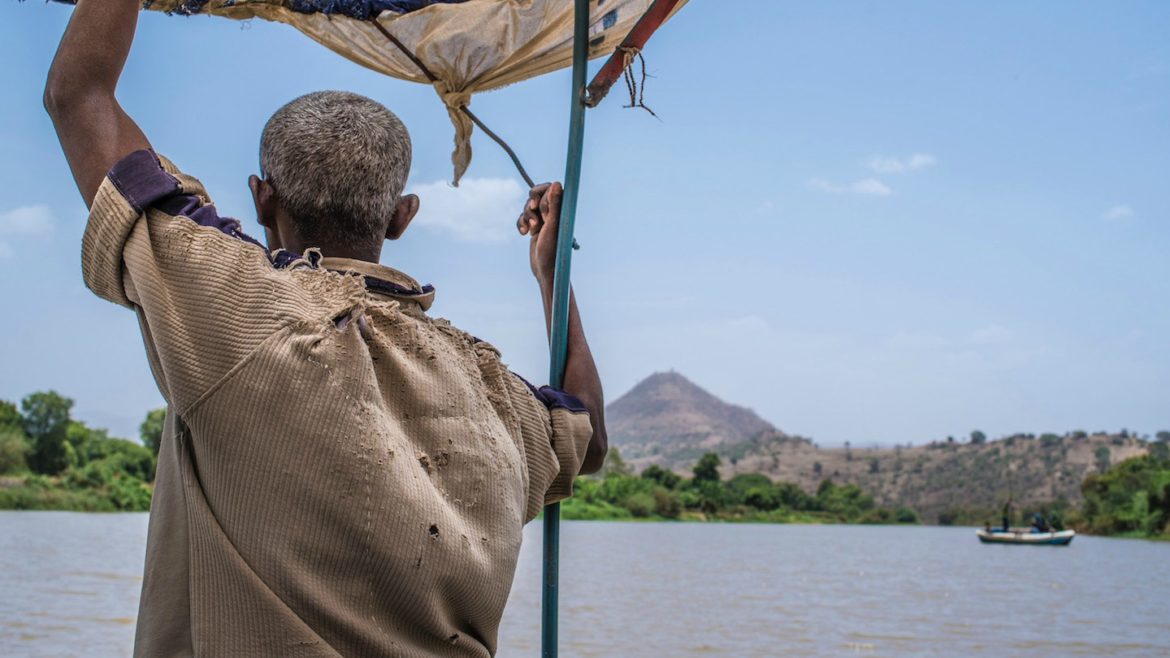 It wasn’t until I found myself in Ethiopia that I realized what a narrow lens I’d previously seen Africa through.

Like many, I’d often associated Africa with lions and tigers and elephants, even before I took my first safari on the Serengeti. But I wanted to see what the continent was all about when you strip away the “Big 5” and the way a wildlife-based itinerary can isolate you from your fellow humans.

Arriving into Addis Ababa, the capital, was exhilarating, but also slightly intimidating. Oh my, I thought as I walked out of the airport, completely unsure of what to expect. Ethiopia was going to be unlike anywhere else I’d seen in Africa — and I hadn’t seen anything yet. 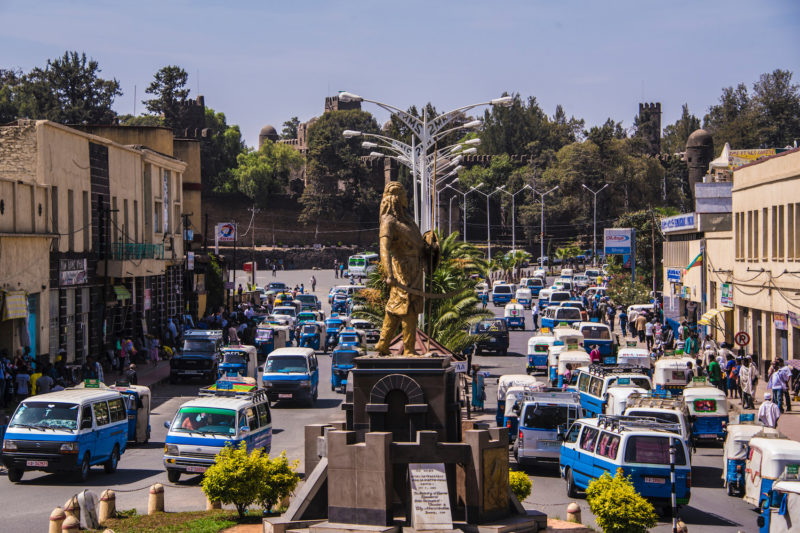 Gondar, a city in northern Ethiopia

Not just another East African city

East Africa is home to some of the world’s most enchanting landscapes, but it’s far from known for its cities.

But one look at the domes of Medhane Alem, the Ethiopian Orthodox cathedral just outside my window, and I immediately found Addis Ababa to be captivating. 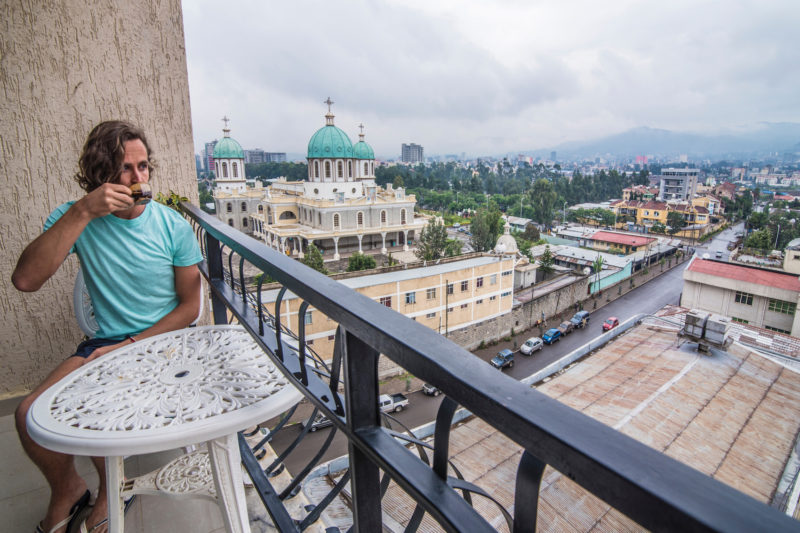 As I walked into the city center, ultimately bound for Mercato l market, I made the acquaintance of a university student eager to practice his English. By the time we parted ways a few hours later, I’d bought him—and all his friends—a round of Ethiopian coffee, but I’d also traipsed through back alleys and bargained at local boutiques I’d never have been able to find on my own. To say nothing of our descent into an under-construction Addis Ababa Light Rail station, where a pair of Chinese construction workers were very impressed that I could speak Mandarin.

On the other hand, Addis (as locals often abbreviate the capital’s name) is very much like other East African cities in that it lacks obvious tourist attractions. Its best publicized one, the Red Terror Martyrs’ Museum, proved an illuminating introduction to the recent history of Ethiopia, and a sobering way to end my first day there.

THE BEST TIME OF YEAR TO VISIT ADDIS? FOR TIMKET FESTIVAL!

Fear God, but not heights

Africa as a whole is much more Christian than many people realize, but while much of the continent owes its religion to colonialism, Ethiopia was actually an early cradle of Christianity. The most popular examples of early Christian architecture in Ethiopia are the rock-hewn churches of Lalibela, namely the Church of St. George (Bet Giyorgis), which looks like a cross when seen from above. 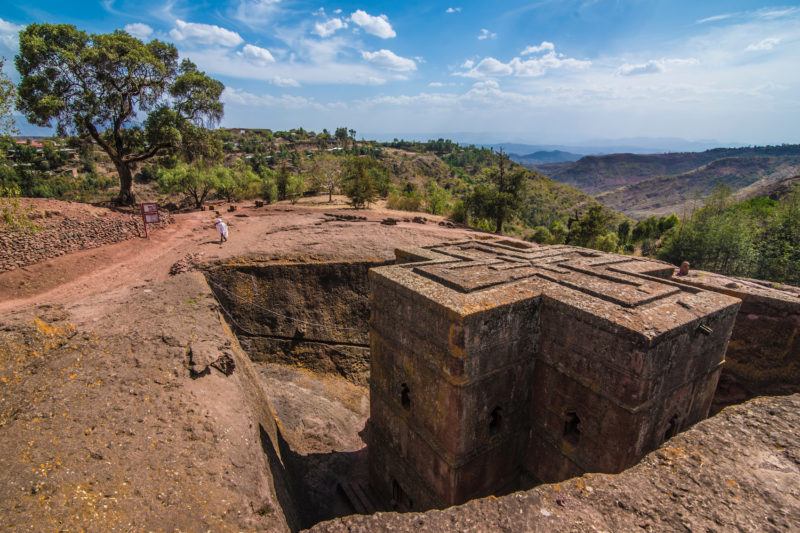 Lalibela is incredible, but it’s just one way to discover Ethiopia’s religious heritage. You can boat between 14th-century monasteries on the islands of Lake Tana near the city of Bahir Dar. You can scale a sheer, rock wall into the country’s far-north Tigray region to find caves filled with 17th-century frescos depicting an Ethiopian Jesus.

With this being said, sheer drops as an everyday occurrence traveling in Ethiopia as ancient churches, be they in the Tigray region or further south in the Simien Mountains, which you can visit either as a day trip from the nearby city of Gondar, or on a 2-3 day camping trip. 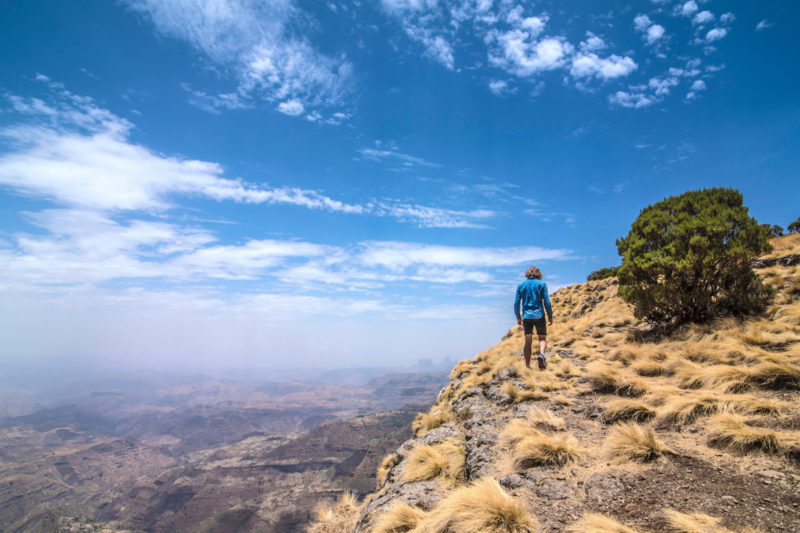 Hiking in the Simien Mountains

If you visit after the rainy season in September and October, the death-defying cliffs all around you, boast distraction aplenty. Yes, we’re talking about the baboons and other wildlife that call the mountains home, and the lush greenery and wildflowers.

Speaking of the rainy season, there’s another reason it’s a good idea to visit Ethiopia in the months following it, if you can. Blue Nile Falls, which like the monasteries of Lake Tana is also located in the vicinity of Bahir Dar, is at its most resplendent after the rains have fallen. It’s beautiful the rest of the year, too, but it positively thunders when the river is high! 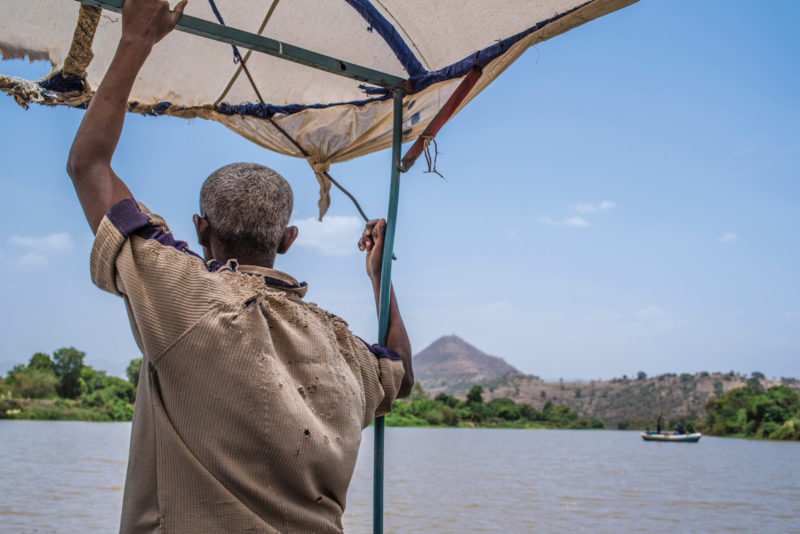 In Ethiopia, you eat with your hands

Ethiopian cuisine is without a doubt East Africa’s most famous.

Its staple, spongy injera bread, is practically a staple in some hipster circles, while the flavors of Doro Wat (chicken stew) and Mesir Wat (red lentil stew) are accessible to even picky eaters, especially when you consider how fun it is to mop them up with your injera. 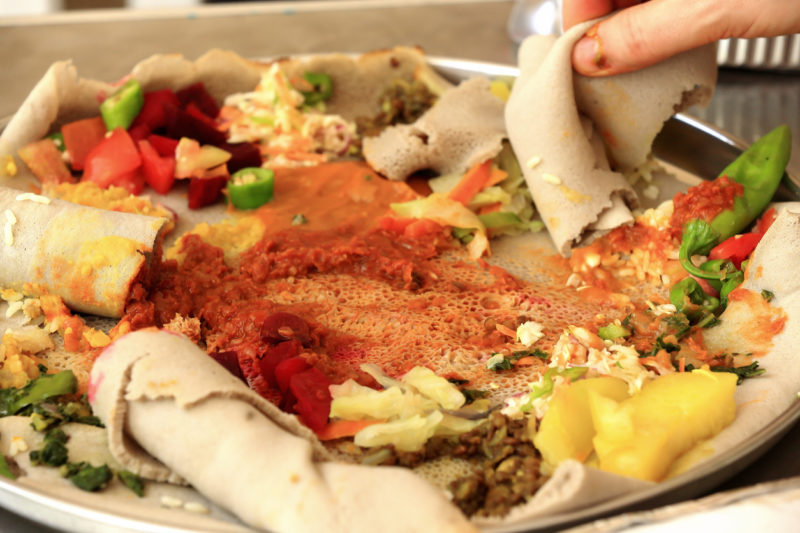 One of the most popular dishes here is shiro, a chickpea stew with minced onions and garlic, while vegan platters are also common (bayenetu).

Tip: Whatever you go for, be sure to carry some hand sanitizer with you.

While Ethiopian food is on its way to becoming legendary (and a dream for vegetarians), Ethiopian coffee is actually the stuff of legends.

Sure, the “coffee ceremony” you witness will probably be a bit more dramatic than if only locals were in attendance, but most anthropologists agree that Ethiopia is the birthplace of coffee (the country’s 10th-century inhabitants are thought to be the first humans to discover the beans’ stimulating effects) as we consume it today. 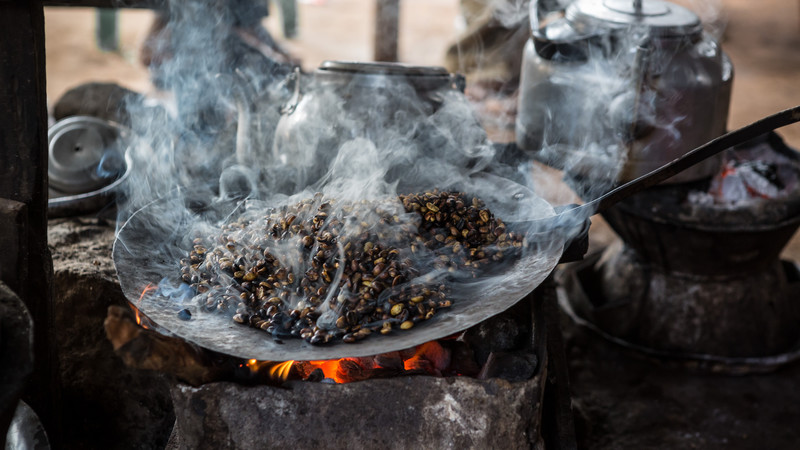 The act of drinking coffee in Ethiopia is ritualistic by default!

Ethiopia’s calling — will you answer?

Ethiopia is the birthplace of coffee, and while recent discoveries have debunked the once-popular idea that it is also the birthplace of humanity, it was nonetheless one of the original cradles of civilization.

But this is no country for cynics. Even if you don’t believe the scripture scrawled inside the monasteries of Lake Tana or the cave churches in Tigray, hopefulness pervades. 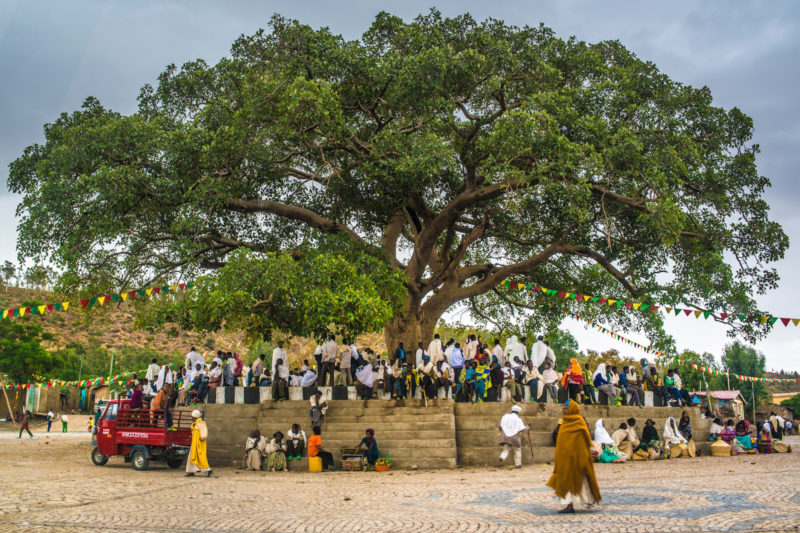 It’s a country brimming with history and pulsating with energy. And this means there’s a near-endless list of spots to visit. Axum, for UNESCO-listed ruins; Yeha, site of the country’s oldest standing structure; Delanta Plateau, home to winding roads, lush valleys and perfect vistas.

What does mean for explorers aching to see a side of Africa that most people don’t? It means that Ethiopia’s calling.

Tempted to visit this unique and beautiful country? Check out Intrepid’s range of small group adventures in Ethiopia. 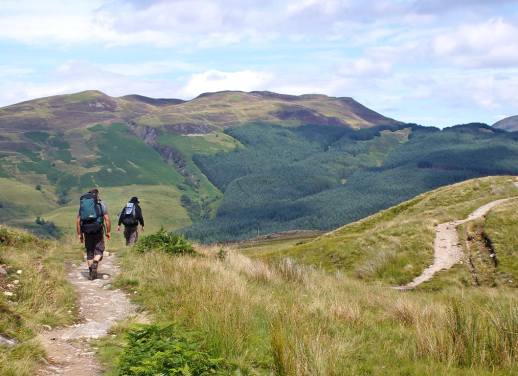 Great article! I agree with every word but this line, to me, is most on-point: “Ethiopian coffee is actually the stuff of legends.” Oooh, Ethiopian coffee is truly amazing. Their coffee ceremony is also a must-experience! Here’s a great read I found online (https://absoluteethiopia.com/facts-about-the-coffee-ceremony-in-ethiopia/), if you want to know more about their coffee ceremony 🙂

Home-made coffee is the best, that aroma is close to none.

Which airline did you use to get to Addis Ababa?

If you use Ethiopian air to fly into Addis, you will get very big discount on any domestic flights.
Check this website for domestic flight prices https://www.highlandtrekking.com/ethiopia-domestic-flight-prices