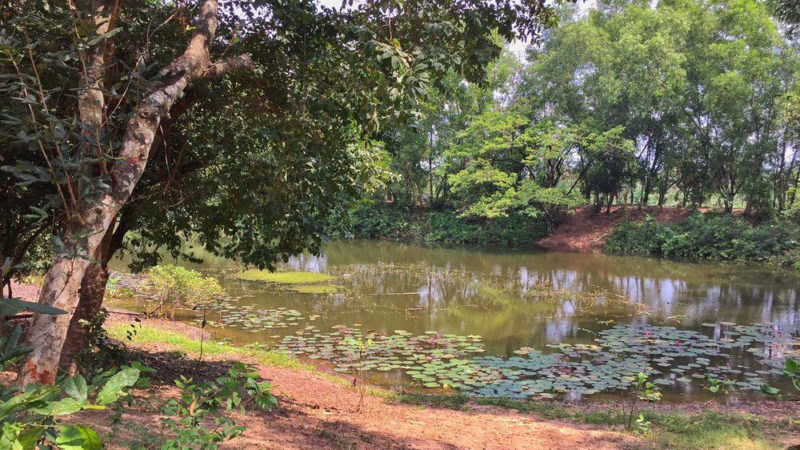 This was originally published on the Urban Adventures blog.

Phnom Penh’s Killing Fields is the most terrible place I’ve been in all my travels. Which is why I think everyone should go.

I admittedly say this without having been to Auschwitz in Poland or the genocide memorials of Rwanda — places of equal shock and horror. But I trust my belief that they, too, are all places we need to see.

The Khmer Rouge was one of history’s most horrific regimes; over a period of four years in the late 1970s, they killed a quarter of Cambodia’s population, under dictator Pol Pot’s mission to create an agrarian society. Education and independent thought were outlawed. Citizens were sent to work in harsh labour camps. Strict food rations left many to die of starvation. And anyone viewed as too much of a risk to the new order were taken away, tortured and killed.

There are more than 300 killing fields scattered throughout Cambodia, but it’s the Choeung Ek Killing Fields outside Phnom Penh that are the most infamous, where today busloads of tourists come to see the mass graves and pagoda of skulls. It’s the most grotesque form of tourism I can imagine.

Earlier, my tour mates and I had been debating the ethics of visiting places like Choeung Ek. Is it disrespectful? Exploitative? I’m unsure.

The Intrepid guide on our Classic Cambodia trip, Leung, leads us around the eerily pretty grounds. The Killing Fields are quiet and beautiful; long-limbed trees offer spots of shade, dirt paths snake through lush lawns, and a lily pad-dotted pond peeks out from just beyond where mass graves were exhumed. 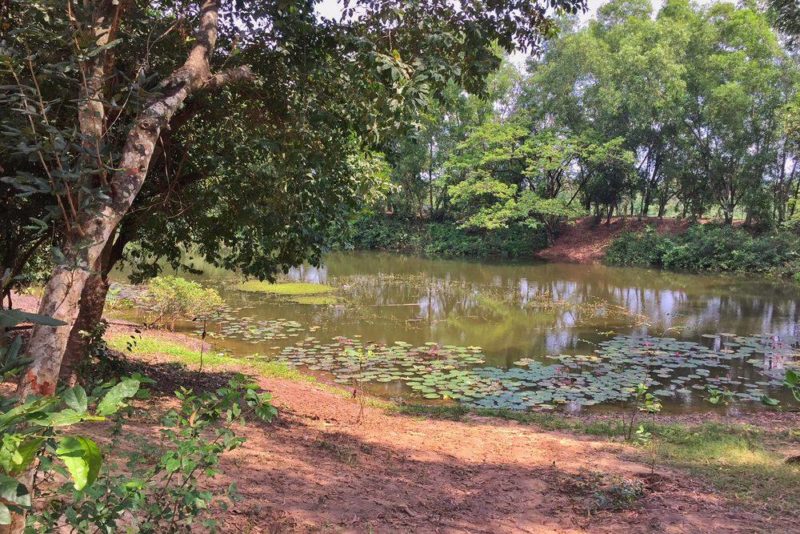 We stop at the first tree on our path, a gnarled creature with sawed limbs and wild roots. Leung tells us it’s where Khmer Rouge soldiers would hang speakers blasting music, to drown out victims’ cries so neighbouring villagers wouldn’t hear. The Fields — and the killings that took place there — were a poorly kept secret from the Cambodian people. When people were taken away, families were told it was for ‘re-education.’ But few ever returned home.

Leung was born in the early 1970s, making him just a small child when the Khmer Rouge terrorised Cambodia between 1975 and 1979. But he remembers. “When people knocked on your door at night, it was to take you away,” he tells us. “My mother told me never to answer the door at night.”

We stop at another tree, decorated in colourful friendship bracelets. Leung is vague as he explains the significance. He tells us people are particularly affected by this site, and want to leave mementos behind. He doesn’t say more, and walks away. As I move along the path, I finally read the sign beside the tree and realise why Leung didn’t say the words out loud. “Killing tree against which executioners beat children,” it reads in both English and Khmer. I want to throw up. 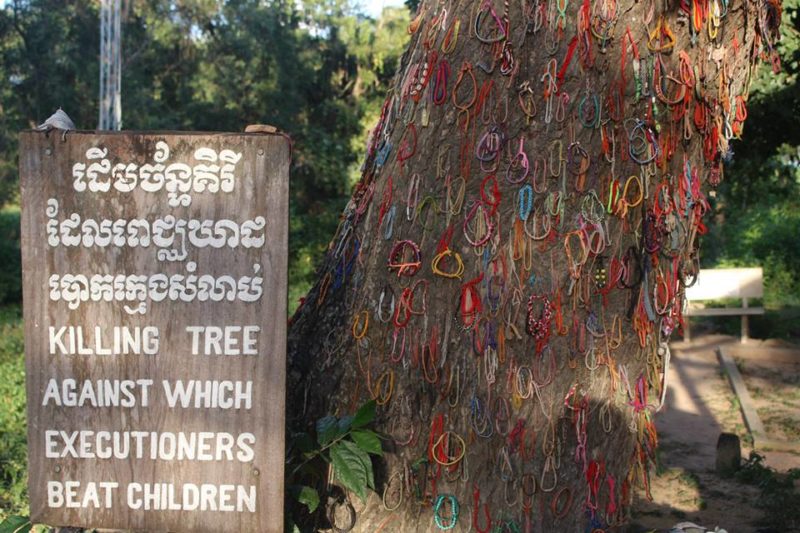 We pass by mass graves, and then the remains of holding rooms and tool sheds that were destroyed by newly freed Cambodians after Pol Pot’s regime was overthrown. “They wanted to get rid of the bad memories,” Leung explains. I toe-kick at an orange brick poking out of the ground beneath my feet, partially buried under 40 years of dust and dirt. The sign beside me says this used to be the ‘waiting room’ where prisoners would await their turn to be executed.

Inside the pagoda at the centre of the Fields, a tower of skulls and bones climbs up and up and up. They’re the remains found in the mass graves, and the skulls are all marked with dots of colour, indicating how the person was killed: bullets, hatchets, chemicals. The pagoda is small and closed in with glass walls, and you have to shuffle the perimeter that’s no more than three feet wide, trapping you between the tower of skulls and the outside world. I look up and when I see how high the tower goes, I panic. I suddenly cry ugly tears and start pushing my way past people, desperately wanting out of this claustrophobic glass cage where I’m surrounded by death and tragedy. 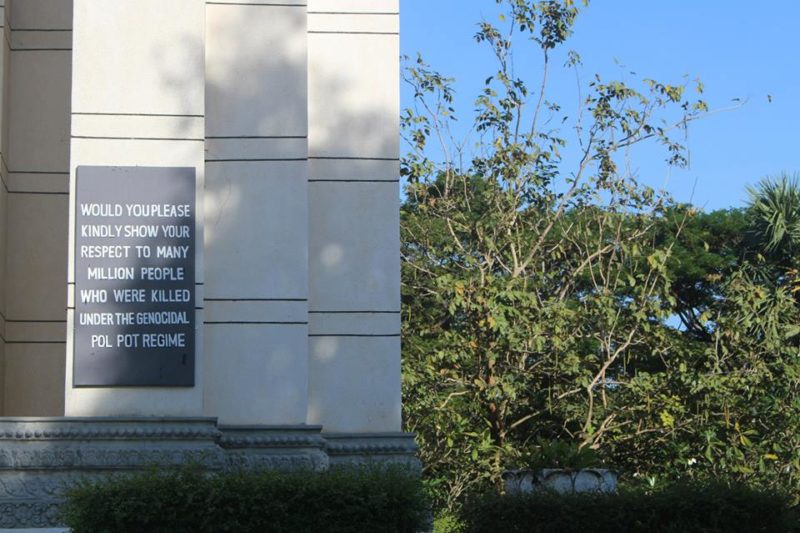 Back in Phnom Penh, the Tuol Sleng Genocide Museum is the site of the former Security 21 Prison. It’s one of the many places where those who were deemed to be against the Angkar, or ‘the organisation,’ were sent. Teachers, doctors, politicians and other educated Cambodians were sent to prisons like S21 and tortured into confessing their ‘crimes’ before being sent off to the Killing Fields.

In some sections, the barbed wire and hastily built brick cell walls still stand. There are still bedframes with ankle chains attached, and blood stains on the checkerboard floors. And throughout many of the rooms are black-and-white photos of those who suffered within.

I stop to look at as many faces as I can. I try to guess ages, to guess backgrounds, to guess who they once were. There are a few photos that stay stuck in my mind. Like the pretty girl who looks to be no more than 20 years old and stands facing the camera but with her eyes looking up and away, just like you do when you’re trying to hold back tears.

READ MORE: SHOULD WE BE VISITING DARK TOURISM SITES?

Back in the van, I ask Leung how he feels about tourists coming to these sites, turning such tragedy into a tourism opportunity. He tells me that he and other Cambodians want the world to see these places, to see what happened. After the US defeat in the Vietnam War, most of the Western world turned away from Southeast Asia. And with the Khmer Rouge so entrenched in secrecy, Cambodians themselves were forbidden from knowing what was happening to their own people. 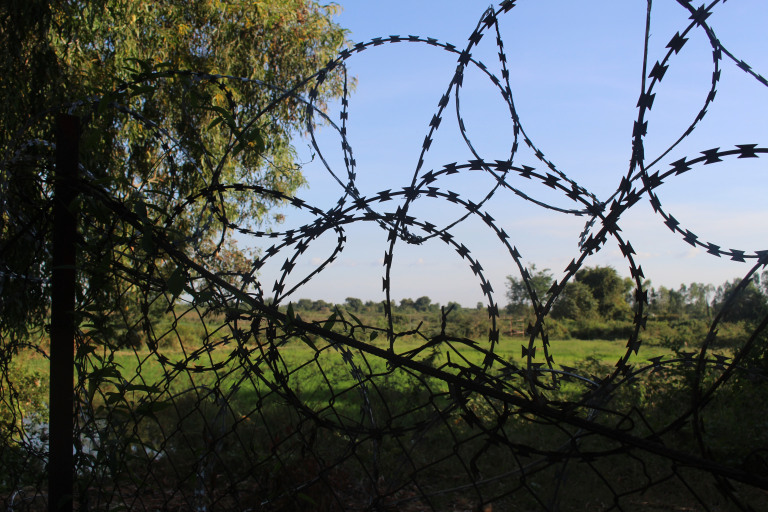 I realise as responsible tourists, we need to come face to face with the ugliness of the world. To recognise and see with our own eyes what horrors humans are capable of. My heart hurts so much more than it would had I merely left my understanding of Cambodia to books and movies and history lessons. The victims deserve our heartache. They deserve to be acknowledged that they existed.

Leung tells us that Cambodians have chosen not to dwell on the past. Putting every former Khmer Rouge on trial is impossible, and so today, you’ll find ex-soldiers and commanders free and living in communities, and even holding political positions (a complicated matter far beyond this blog post). “We forgive but we’ll never forget,” Leung says.

“When you hold hatred in your heart, you’re only hurting yourself,” he replies.

I look out the van window and see locals going about their day in Phnom Penh — street vendors selling bowls of noodles, motorbikes weaving through traffic, teenagers gossiping together on park benches. Life goes on. And we need to understand and appreciate how beautiful that is.

Cambodia is a country that might challenge and will change you. Check out Intrepid’s range of trips there. 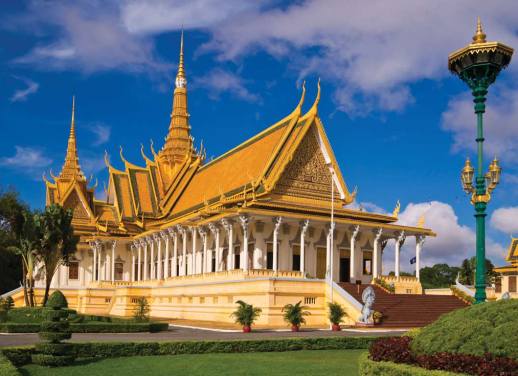 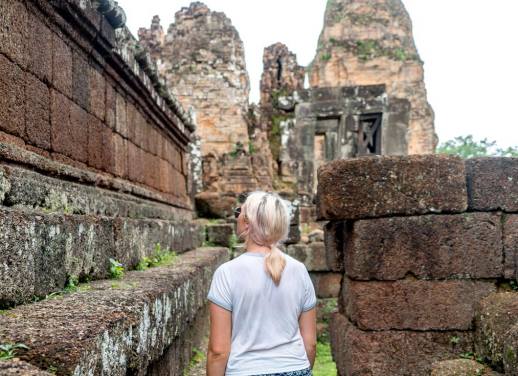 You fail to mention that Tol Sleng was a high school at one time, which somehow made it even more dirty and wrong me on every level. The way the Khmer Rouge took a place of learning and made it a place of torture violated something so pure.

I was at both sites in 2010 and there are they didn’t allow bracelettes to be placed on the tree then but the image of that tree will haunt me the rest of my life. There are some things bracelettes can’t cover. There are over memories I have from my visit to the Killing Fields, that nearly ten years later, I can neither put into words nor forget. I believe we should all visit the Sites of Conscience to ensure that we not just overlooking such horrific moments of human history.

There are places in the world that when you leave them, you go in silence but nevertheless think to yourself about all that you have seen. Those visions are burned into your memory – no photographs are needed to remind you. The ghosts of the past are in the air you breathe on those sites. The Killing Fields is one, Hiroshima is another. They are memorials to man’s failings and hopefully we can learn from them. By letting tourists visit them, it fills in the gaps in our knowledge but they must be treated with respect and the fact that they are memorials to dead people must never be forgotten..

Thanks you for the story – it brought back many thoughts of our trip to Cambodia.

I did the same trip in March – April 2018. I felt like I could have written this article, as it so perfectly describes the thoughts and feelings I felt when I visited Cambodia.

Thank you so much for your honesty, and for sharing. It’s such a wonderful, sad, beautiful, and complex country. I implore as many people as possible to visit.