San Francisco is one of the more popular cities in the US with millions of people, from both overseas and interstate, traveling to this spectacular destination every year. Due to its famous and iconic landmarks and nice weather all year round, San Francisco welcomes people from neighboring cities who are looking to enjoy a day trip, weekend away, or longer vacation. Therefore, most travelers from cities within the state of California drive to the 'City by the Bay' out of efficiency and convenience. We've set out a guide as to how many miles and how many hours it will take you to get to San Francisco from its neighboring cities.

How far is Oakland from San Francisco?

Located in the East Bay region of the San Francisco Bay area, Oakland is a major port city and is home to over 400,000 people. With an average of roughly 260 sunny days per year, Oakland tends to be on the warmer side with Spring and Fall offering the best weather. Conveniently, Oakland is only 12 miles from the city of San Francisco, taking only 20 minutes between destinations. This makes San Francisco a popular spot for date nights, day trips, weekends, and longer vacations.

How far is Palo Alto from San Francisco?

Similar to that of San Jose, the city of Palo Alto is firmly entrenched within the Silicone Valley, boasting its role as a leader when it comes to worldwide technological development. Also home to Stanford University, this city is also 33 miles from San Francisco (a 40-minute drive), making it the ideal destination for college students looking for an exciting weekend away or tech workers wanted to de-stress after a long week.

How far is San Jose from San Francisco?

The epicenter of California's high-tech community Silicone Valley, San Jose is the largest city in Northern America when it comes to both population and area covered. Home to roughly 1 million people, this beautiful city has the highest concentration of technological companies in the US and is located only 52 minutes from San Francisco, meaning it will only take roughly 48 miles to travel between the two destinations.

How far is Santa Cruz from San Francisco?

Featuring a boardwalk full of rides and attractions that could rival Los Angeles' Santa Monica Pier, Santa Cruz is located in Monterey Bay and is home to about 64,000 people. If you're looking for a great spot for a weekend away or for a longer vacation, Santa Cruz is only 73 miles away from San Francisco, making it just over an hour to drive between the two destinations.

How far is Sacramento from San Francisco?

Proudly acknowledged as the capital city of the U.S state of California, Sacramento is home to over 500,000 people and is one of the most diverse cities across the state. Ranked as one of the sunniest spots across the US with an average of 71 days annually recording temperatures of over 90 F, Sacramento city is 87 miles from San Francisco by car. Taking about an hour and a half, San Francisco is a perfect destination for those who want an exciting weekend escape to the big city.

How far is Monterey from San Francisco?

Nestled on the edge of California's Central Coast, Monterey features a strong Spanish presence and is home to roughly 28,000 people. Enjoying an almost Mediterranean climate, this city is quite foggy between the months of June and August while only reaching temperatures of 75 F. Traveling between Monterey and San Francisco would take you about 2 hours, with the distance traveled for a one-way trip being 118 miles.

How far is Fresno from San Francisco?

Situated in the very center of the San Joaquin Valley is the city of Fresno, known for its sunny climate and for being the 'raisin capital of the world'. With temperatures climbing over 90 F for more than 100 days out of the year, Fresno prides itself on its agriculture and cultural endeavors. A trip from Fresno to San Francisco will take you about 3 hours, traveling roughly 187 miles between the two destinations.

How far is Yosemite from San Francisco?

Yosemite National Park is one of the largest and more popular parks in the state of California, covering roughly 748,436 acres of designated vegetation, and featuring natural wonders such as waterfalls, granite cliffs, mountains, lakes and, giant sequoia groves. While Yosemite National Park is beautiful in its own right, those who want to travel between the park and San Francisco can do so in 3 and a half hours, covering roughly 170 miles. 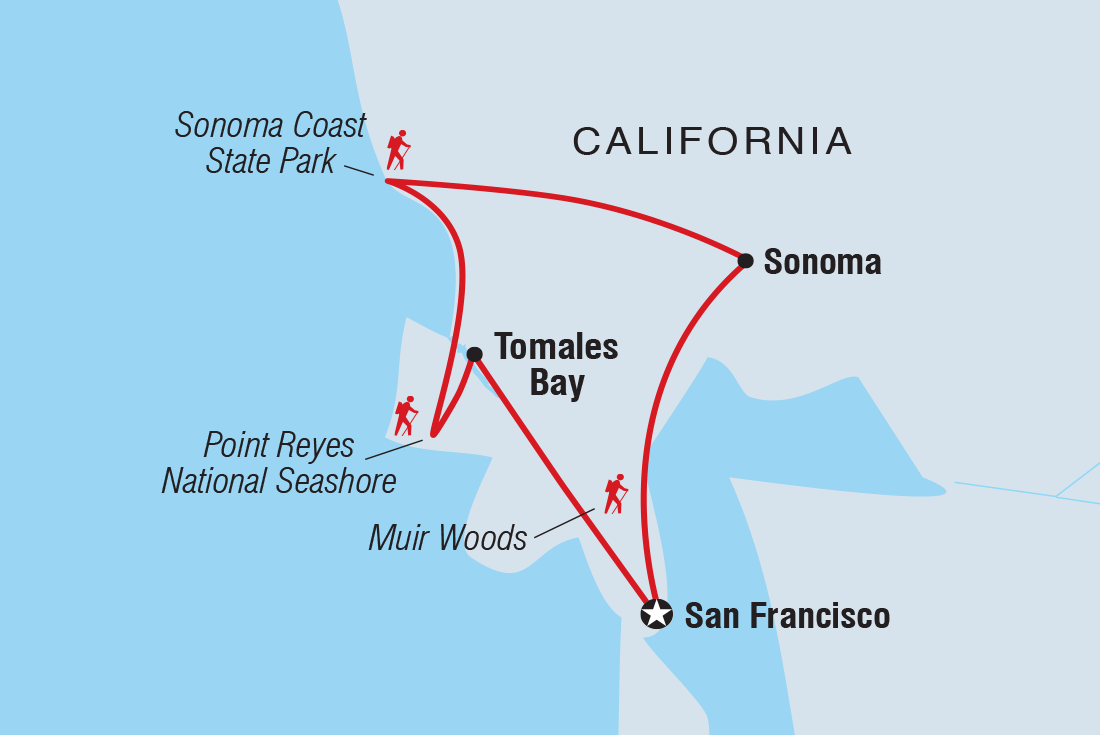