Where to find the best street art in South America 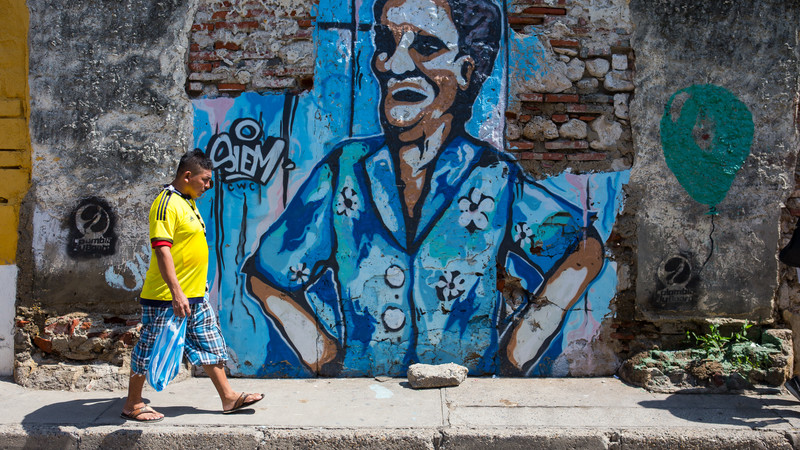 For those that have spent even a small amount of time in South America, there will always be certain details that stay with them. The ever-present soundtrack, be it from bars, market stalls, processions, or, most commonly, a dodgy mobile phone speaker. The veritable selection of street dogs all vying for your attention, or the last bite of your empanada, and colour – colour literally everywhere. Rainbow costumes and national flags, the bright red of Coca-Cola signs and local beer companies and the kaleidoscopic hues of colourful walls that can be found in almost every town and city. It seems fitting then, that artists from across the world look to South America as the perfect canvas for their work, and why this varied continent is home to so much exceptional street art.

And yet, graffiti here is so much more than simply art, or the curated outpourings of a disenfranchised youth. In a part of the world that has seen so much turmoil, lived through tumultuous civil wars and faces past and very present gang violence and oppression, these works of art have provided a fundamental form of socio-political expression – and a way to bring controversial subjects into the public arena. Street art here is embraced, respected and even encouraged, and no visit will be complete without exploring at least a little of what it has to offer.

Here are the best spots to find street art in South America: 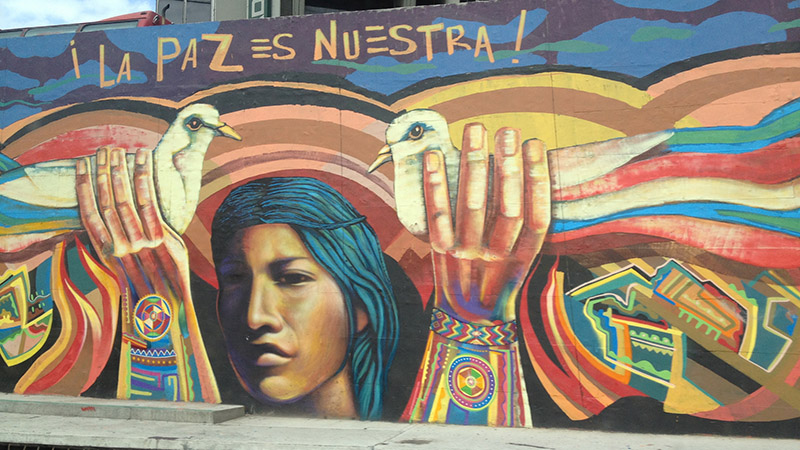 From the murals that line the highways, to large-scale pieces that transform otherwise slightly grimy barrios into living, breathing art exhibits, Bogota is a city teeming with street art.

Yet, were it not for the police’s fatal shooting of a teenage artist in 2011, and the ensuing protests, things may have been very different. Instead, street art was largely decriminalised, and elaborate murals have been allowed to flourish across the city.

Best street art spots: Calle 26 or the backpackers’ neighbourhood of La Candeleria. Many pieces can be found independently, but to really gain an insight, consider taking a street art tour. 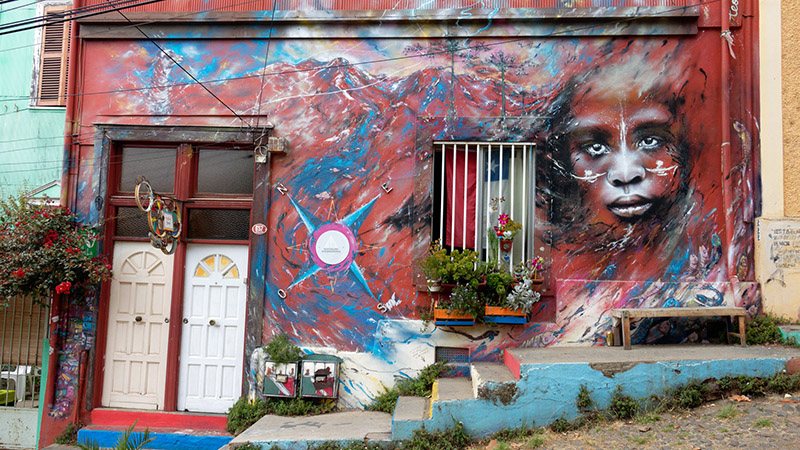 Colourful and chaotic, Valparaiso is a home for artists and a city where street art is so interwoven into its structural fabric, it would be impossible to separate the two.

From large-scale murals to little hidden-away pieces, graffiti plays a large part in making sections of the city so colourful and enticing – a wonderfully non-permanent and free art gallery that is added to every day.

Best street art spots: Either join a street art tour or grab a free city map and follow the route for the Museo a Cielo Abierto, a well-established circuit which brings you to the work of several notable artists.

RELATED: A GUIDE TO VALPARAISO, CHILE’S CITY OF ARTISTS 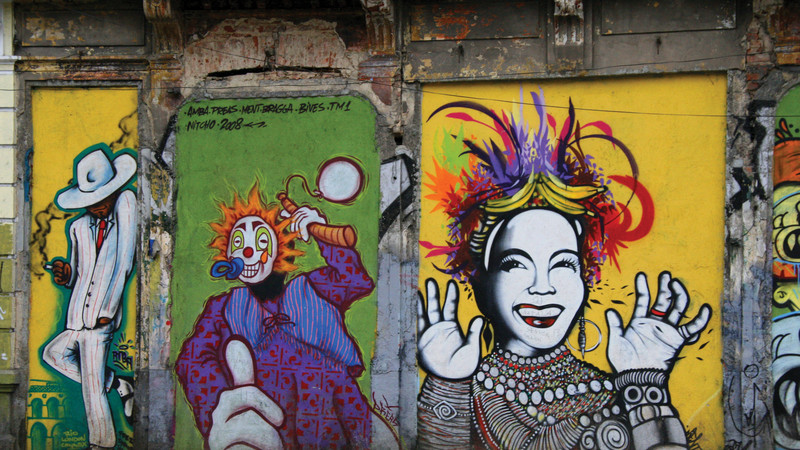 Following the decriminalisation of street art in 2009, local artists have changed the literal face of Rio de Janeiro, taking the city’s grey urban sprawl and injecting colour and life. Bold and ubiquitous, it covers walls and buildings throughout the city, with no neighbourhood immune – from the favelas to high-scale apartments, the result has been remarkable.

Best street art spots: Everywhere. To really get a sense of the street art scene in Rio (and because of safety concerns in some neighbourhoods), those with a real interest should take a tour. 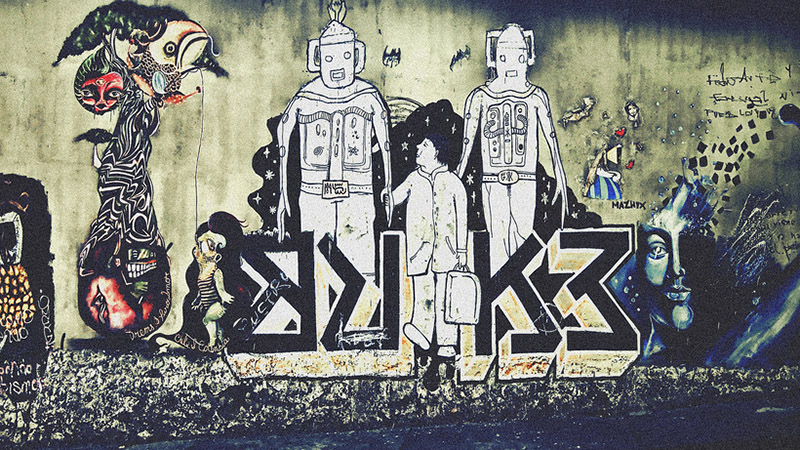 Street art may be prohibited in Quito, but that means little to the artists that thrive in Ecuador’s capital city. Here, high up in the Andes, the city has instead developed quite the reputation as the place where ‘no wall is white’.

Best street art spots: Graffiti can be found throughout Quito, including within the touristy La Mariscal and Centro Historico. For die-hard street art fans, be sure to venture to Floresta, Guápulo, and Monteserrín.

RELATED: ECUADOR, SO MUCH MORE THAN THE GALAPAGOS

“They erased one, we will paint a thousand.” 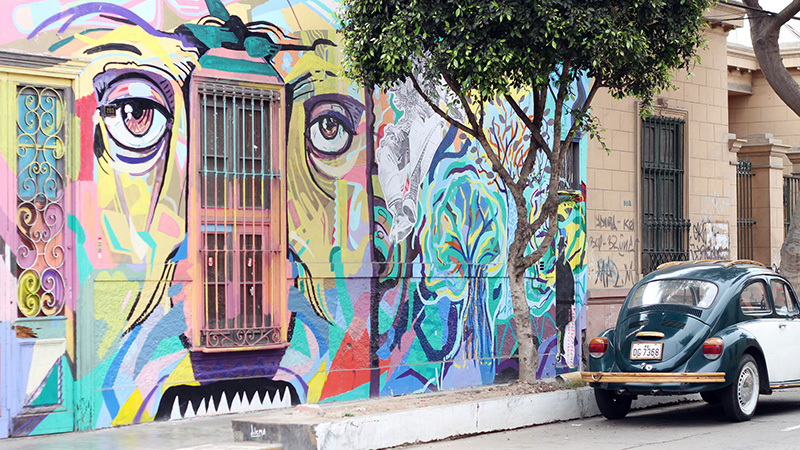 This has been the response of Lima’s street artist collective to the destruction of some of the city’s favourite pieces. It seems that whilst visitors and locals alike flock to the fabulous hipster neighbourhood of Barranco, the new mayor has decided that street art is little more than vandalism, with at least six large murals being painted over with the yellow paint of his political party.

Thankfully, this hasn’t stopped the city’s street artists, and Barranco continues to be filled with beautiful large-scale pieces that just beg for visitors to the city to leave the backpacker confines of Miraflores and delve deeper into more alternative areas of Peru’s capital. 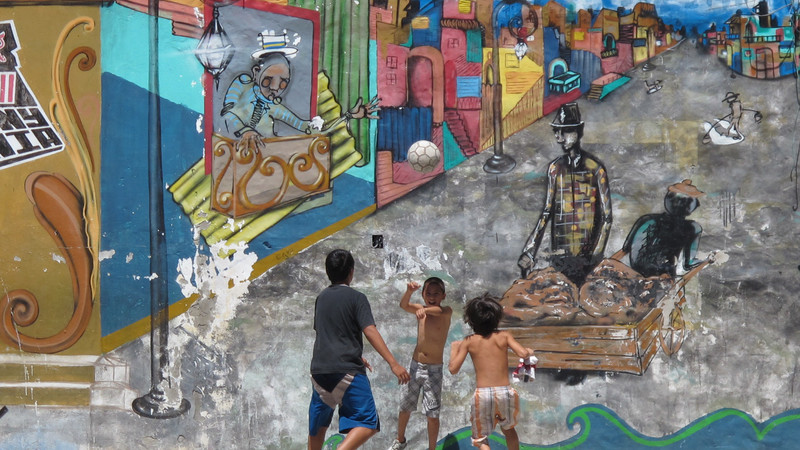 From the dark days of the dictatorship, when graffiti and political expression carried with it the risk of imprisonment or death, Buenos Aires has come a long way in accepting street art as a positive concept.

No longer a city where artists paint by moonlight, instead they are encouraged, by members of parliament no less, to “add pleasure, art, culture and joy to public spaces”. As such, Buenos Aires is fast becoming recognised as a new centre of street art in South America with murals appearing from not just local but internationally renowned artists as well.

Make your own discoveries of street art in South America on an Intrepid small group adventure.

Words by Along Dusty Roads – check out their instagram feed for some serious wanderlust inspo.