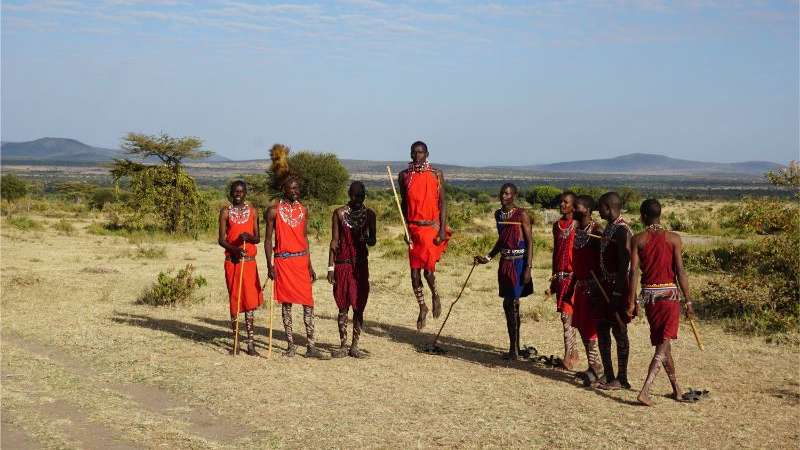 I wonder where the closest hospital is and how long it takes to get there? I hope there are no snakes around. This is the Masai Mara, with lions! Are my kids going to be safe in a basic tent? What if one of the kids has to go to the toilet in the middle of the night as they often do? Have we taken on more than we can chew with our two kids aged 8 and 10?

These were some of the questions going through my mind as the Intrepid truck turned off the main road down a dusty and bumpy side road to head to our camp for the night with a Maasai tribe. 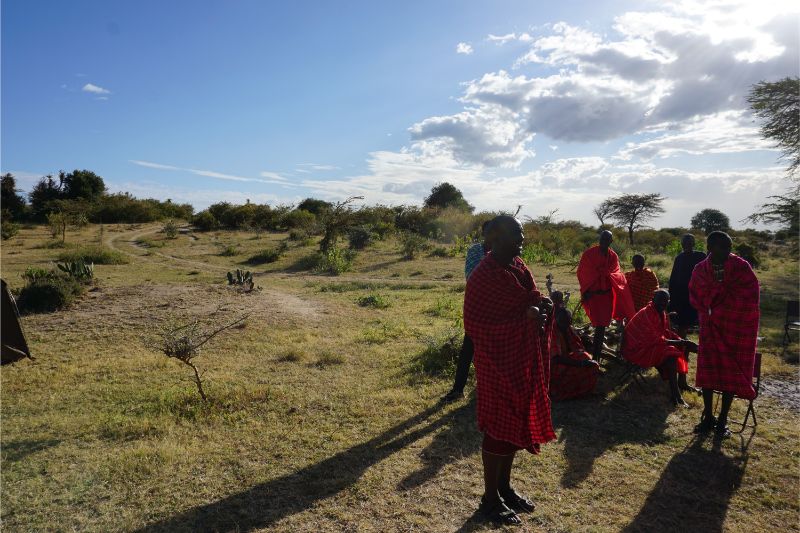 I tried to reassure my wife that we were in good hands and that this night of the Kenya Family Safari would be one the kids would remember forever. The kids were already hyper excited about the prospect of spending the night camping, where lions and hyenas roam the plains, as well as meeting the mighty Maasai warriors. They had seen the Maasai people on the Discovery Channel before, and my son was really excited about the prospect of jumping together with them.

The truck crossed a small creek and we then arrived at the Masai village where we were greeted by the chief and some friendly Maasai warriors. 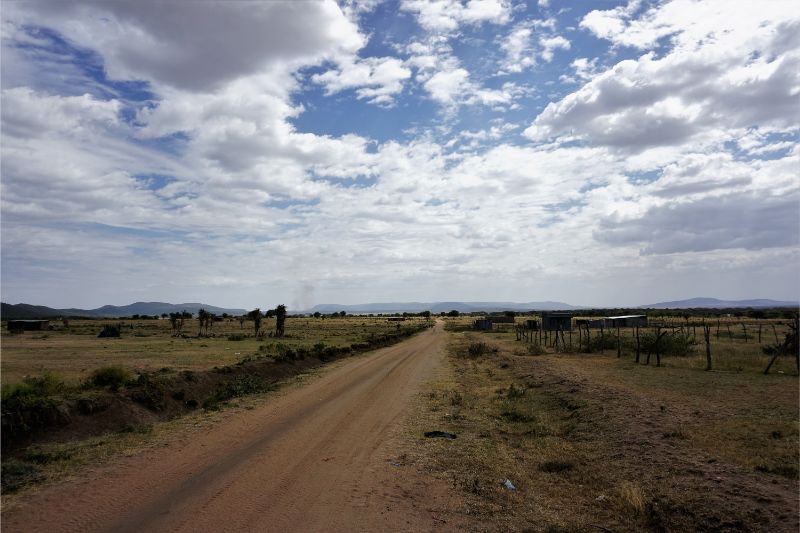 The road to Loita Hills, where the camping was to take place

The warriors helped us unload our stuff and set up the tents for the night. The chief was an immediate hit with the kids joking around and dispersing bits of Maasai wisdom. He was very good at getting the kids to take part in the chores around the campsite. I made a note to myself to talk to the chief later to learn some of that magic; our kids who are usually lazy with chores at home were leading the way!

READ MORE: WHAT MY KIDS LEARNED ON A KENYA FAMILY SAFARI WITH INTREPID

After a quick walk around the village we watched the magical sunset over the savannah. Our family loves watching the sunset, and this one was a special one. 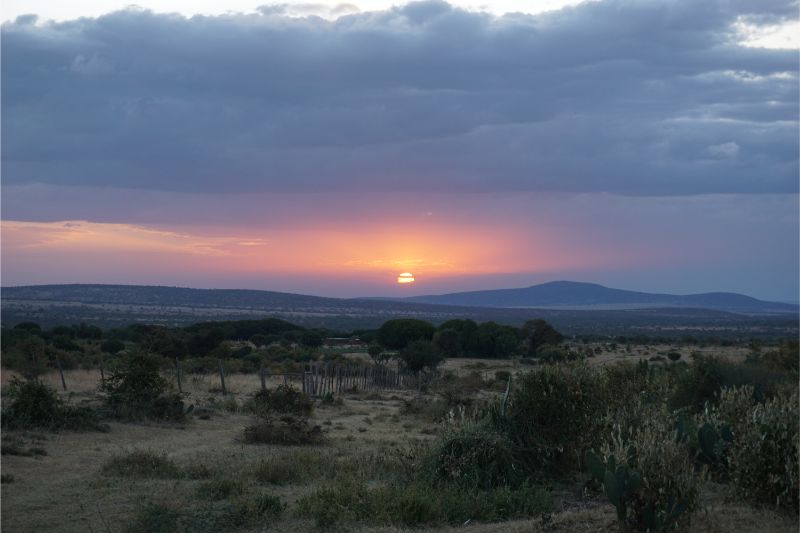 After a quick meal we were on to the highlight of the night. Sitting around the campfire listening to Maasai fables and stories. The night sky in the Masai Mara has to be seen to be believed. We got a perspective on the scale of the world that we had not experienced before. So many stars!

READ MORE: WHY A VISIT WITH THE MAASAI PEOPLE WAS THE HIGHLIGHT OF MY KENYA TRIP

The Chief cut a fresh piece of meat from the slab he had burning on the fire, noisily chewed it and then started talking. He was a great storyteller and captivated his audience, both young and old.  We heard stories about the first Maasai who was called “Maasinta” and how God created cattle for him. We also heard more real-life stories like how the Chief’s own son had to face down a lion when he was only 13 years old. Luckily, the lion looked at him, paused for a while, took mercy on him and walked away. 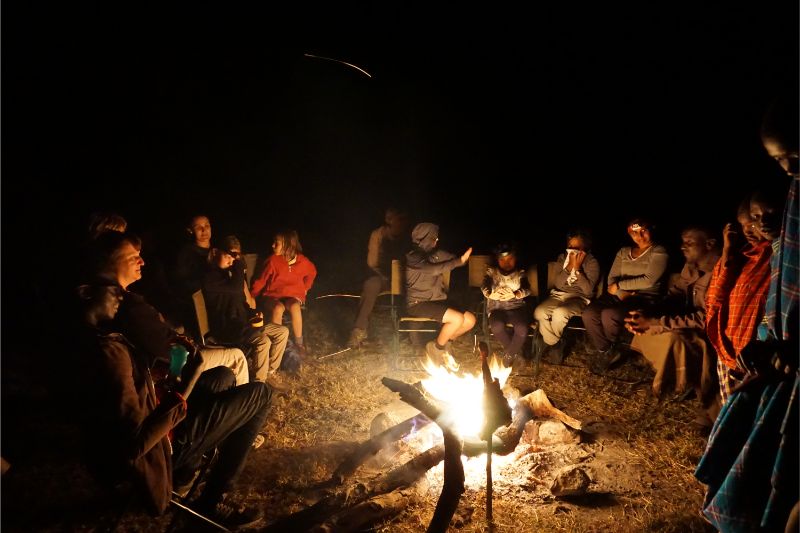 The kids listened with their mouths open but soon fell asleep. The chief then got on to more complex topic for the adults, focusing on topics like marriage and Maasai culture and traditions. We retired for the night in awe, emotional and inspired from the experience. It was a cold night in the tent and thankfully none our kids wanted to go to the toilet in the middle of the night. But it was reassuring to know a Maasai warrior is always on standby to escort you should the need arise.

CHECK OUT INTREPID’S RANGE OF FAMILY TRIPS IN AFRICA

All of us woke up as the sun was rising and the morning was as magical as the night. Even my 8-year-old, who is usually an impatient busybody spent a good 15 minutes in silence, just watching the sun come up. 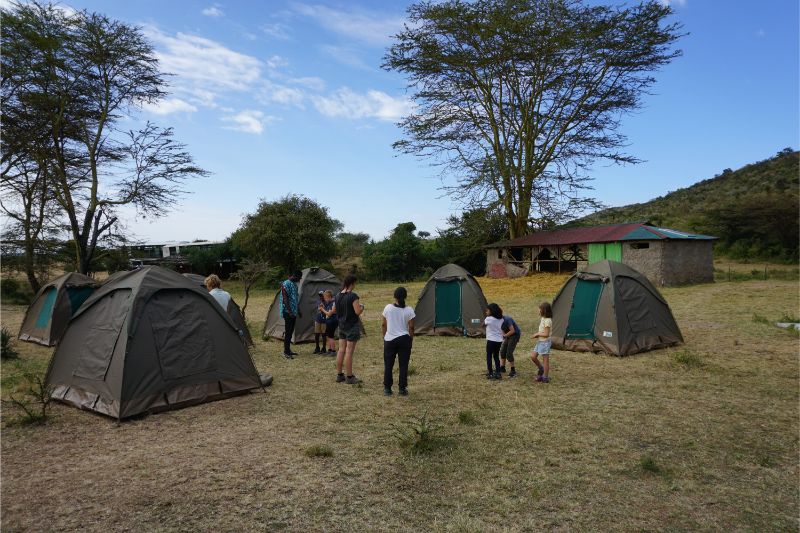 Preparing to leave the campsite

SEE MORE: A KENYA SAFARI WITH INTREPID, IN 17 PHOTOS

We were also able to learn how to throw spears and clubs like a Maasai, which was a great activity for the kids as well as the kids at heart. Making fire with nothing but sticks was also a hit with the kids. Each of them had a go and were surprised how hard it really was! 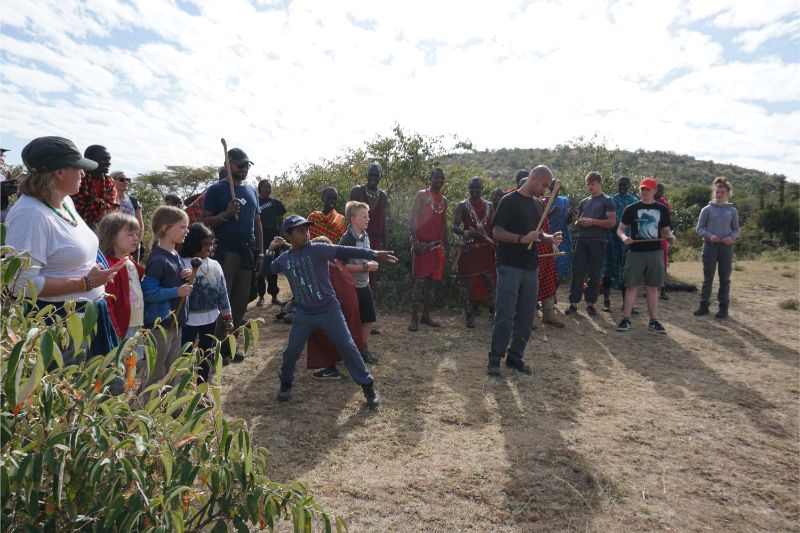 It was a morning full of activity and before we knew it, it was time to go. We had only spent one night with the Maasai but it was an emotional goodbye.

My son’s words sum up the feeling best. As we were leaving he said “I feel like there is a part of Maasai in me now”.

Ready to experience this magic for yourself and your family? Check out Intrepid’s Kenya Family Safari.

(All images courtesy of Anu and taken on his Kenya Family Safari with Intrepid Travel.) 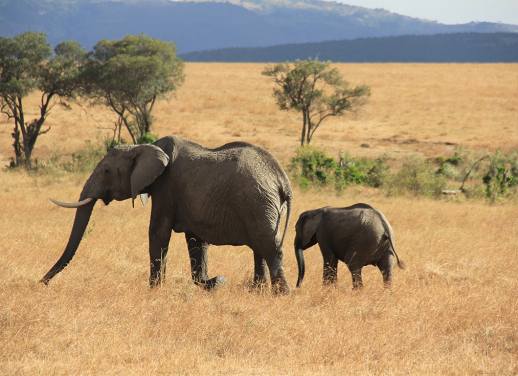 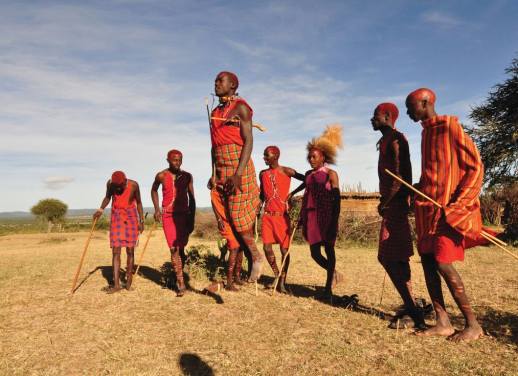 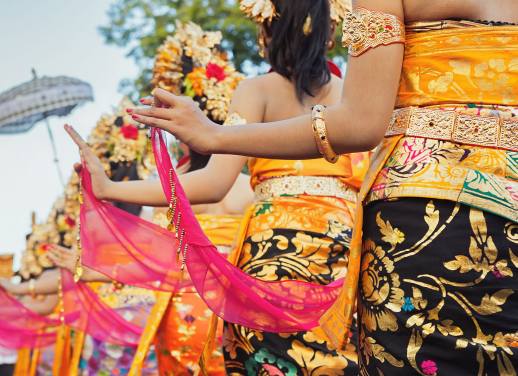 Born and raised in Sri Lanka, I have lived most my life there, with a stint of 10 years in Australia, 1 in the US and 1 in the UK. I am from an IT background but am very happy to be working in travel now, where my real passion lies. I have always loved to travel and was determined not to let having kids stop me. We now travel everywhere with them.

Loved your adventure! Sounds like the kids had a remarkable time. It’s so nice to know that they’re lucky to be able to travel and experience a different kind of world when they’re young. I’m sure traveling will open their minds and give them a broader way of thinking. I would love to take my future kids to these kinds of adventures. Keep it up!