Home » Everything you need to eat in Italy: a city-by-city guide
FoodGuides

Everything you need to eat in Italy: a city-by-city guide 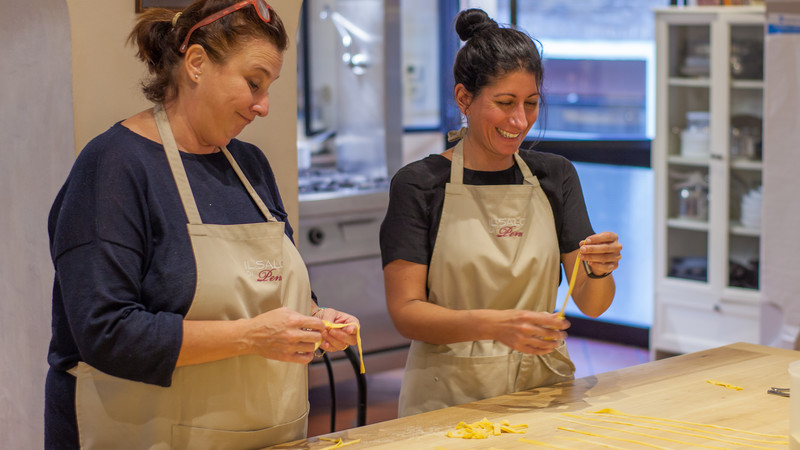 The smells of Italy are intoxicating. Even in gritty urban areas where car horns cry out and scooters zip past, the sweet and spicy aromas are the only thing you’ll think about.

Enjoy heaps of homemade tortellini in Bologna, grab a cone of fried seafood in Venice, and linger in front of bakery windows in Naples wondering if there is room for one more dessert – even though you’ve already had two or three that day. In Italy you will eat, but what you eat should depend on where you are.

The country offers much more than pasta drowned in tomato sauce, and the American plate of spaghetti and meatballs does not exist on Italian menus. Instead, search out regional specialties that showcase the abundance of land and sea from north to south. 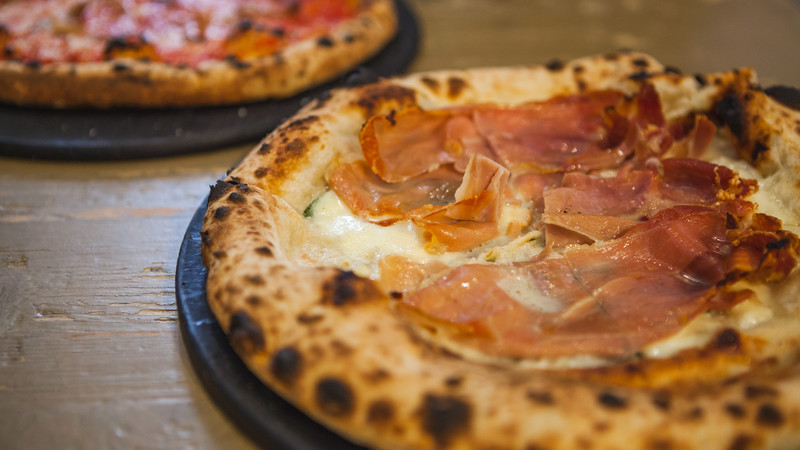 Here are all the dishes you should eat, and all the tasty restaurants to eat them at:

Bring your stretchy pants and eat pasta, lots and lots of pasta. While some come to the Eternal City in search of ruins, artwork, or religion, I came to eat. And while I often travel solo, the best part of being in Rome with a group was the ability to pass plates around with friends so that we were all equally satisfied and stuffed on as many dishes as possible.

If you want to plan your day around food, start off with an espresso, but skip the croissant. They aren’t that good. Instead, save the calories for lunch and dinner. 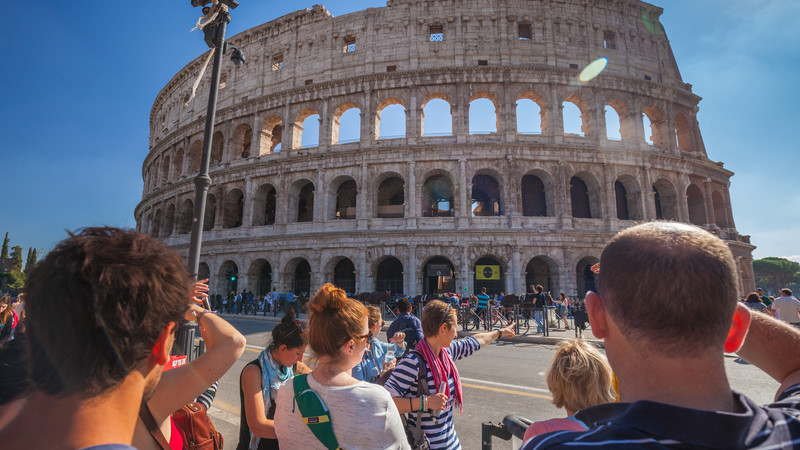 Dig into plates of cacio e pepe (pasta with cheese and pepper), twirl your fork around strands of spaghetti alla carbonara (there’s no cream in the real deal), or dive into a richly satisfying bowl of bucatini all’amatriciana (red sauce with pecorino cheese and guanciale).

READ MORE: HOW TO GET OFF THE BEATEN PATH IN ROME

Head to the cobbled alley neighborhood of Trastevere to rub shoulders with locals and dine at unpretentious eateries. Da Enzo is a favorite hole-in-the wall. You’ll need to queue for a table, but the wait is worth it for homey service, freshly-made pasta, and another classic Roman dish, carciofi alla giudia (Jewish-style fried artichokes). While in the neighborhood, also stop at one of the city’s best gelato shops, Fior di Luna. 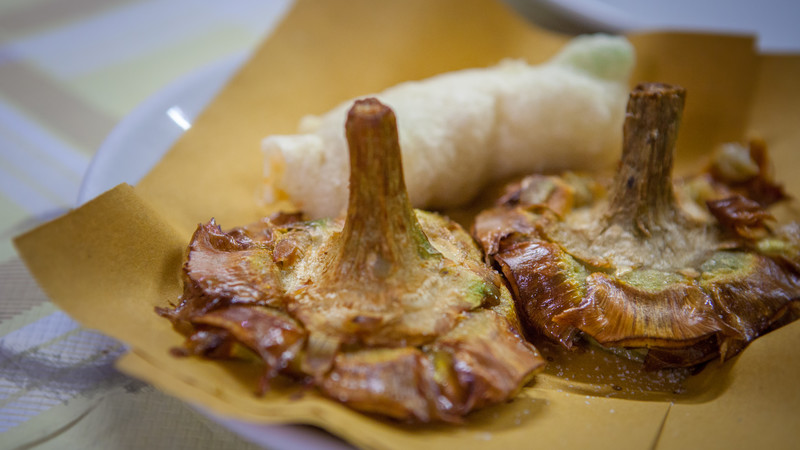 CHECK OUT INTREPID’S RANGE OF SMALL GROUP TOURS IN ITALY

The Renaissance capital of the world, Florence is full of stunning architecture and priceless artwork. Yet even with a million-dollar atmosphere, the food is surprisingly humble and based on traditional peasant meals. 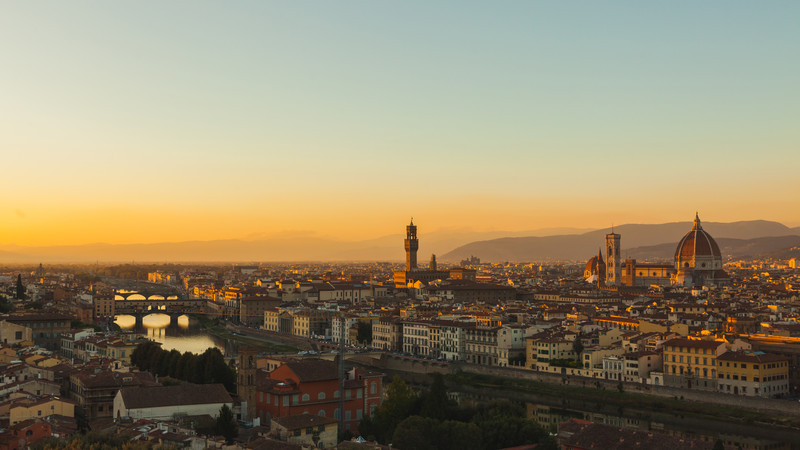 If you want to dine on a budget, stick to a local menu. White bean soup in winter and panzanella salad in summer are a must. Those with daring taste-buds should bite into a lampredotto sandwich (tripe topped with spicy sauce).

For a quick but delicious option, head to the Mercato Centrale – a foodie’s paradise in the form of an upscale food court. Here you’ll find pasta, snacks, pizza, and Florentine specialties, including focaccia-style sandwiches overstuffed with meat and cheese. The prices are reasonable and there’s ample seating.

READ MORE: HOW TO SPEND THE PERFECT 7 DAYS IN ITALY

Want to splurge? Fungus lovers must try tagliatelle with porcini and truffles. The rich pasta dish can be found all over the city, but is at its best when truffle season peaks in fall. Meat lovers, grab a friend or four and feast on Bistecca alla Fiorentina, a giant T-bone steak served rare. The price is per kilo, and the steaks average 1-3 kilos (2 – 6 pounds). 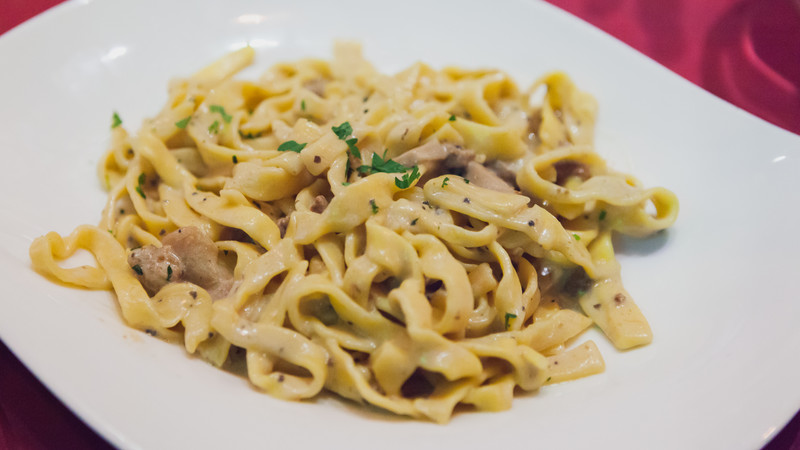 Tagliatelle with porcini and truffles

Sure, you’re full, but don’t forget about the sweet stuff. Gelato was invented here, and it’s where you’ll find some of the smoothest frozen treats in Italy. Try Gelato La Carraia which uses locally-sourced and organic ingredients, or Venchi which boasts a chocolate fountain of dreams.

Venice’s magical labyrinth of small streets and canals makes it one of the top destinations in Italy. However, there are still plenty of mom & pop restaurants that serve up local fare. For the best meal, step away from the Grand Canal and head towards the back streets.

Skip the pizza – a ban on most wood-fired ovens on the island make it one of the worst places in the country for a traditional pie. Instead, devour cicchetti (Italian-style tapas). Choose from small bites of fresh fish, cheese, and deep-fried goodness paired with an Aperol Spritz for the perfect canal-side lunch. 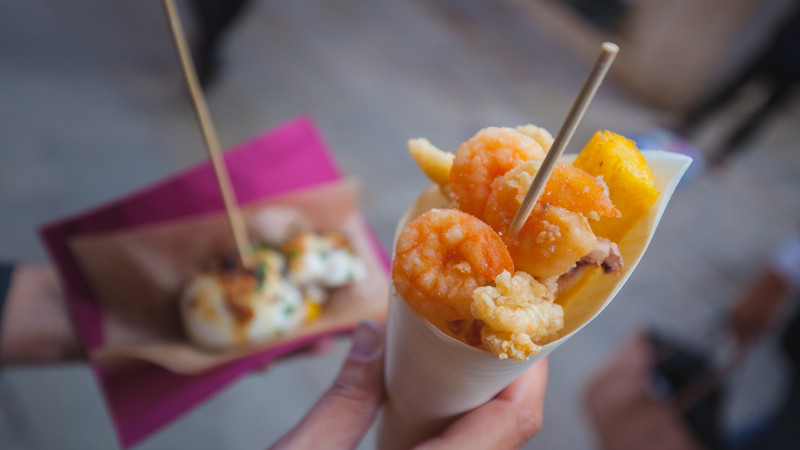 Bring cash, as many of the bàcari (small bars) don’t accept credit cards. For a satisfying meal on the go, Acqua e Mais serves up the city’s best street food, including fried seafood, polenta or veggies in a paper cone. Best of all, it’s just steps away from the hectic Ponte di Rialto.

READ MORE: HOW TO BEAT THE CROWDS IN VENICE 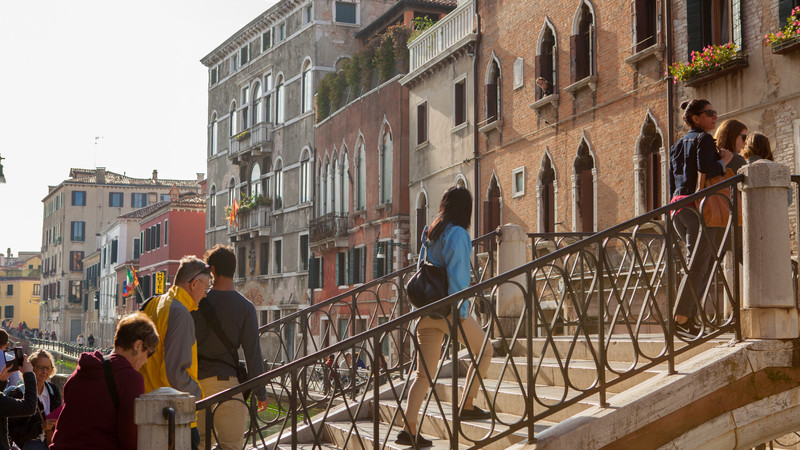 If meat and cheese are your two favorite food groups, you’ll eat like a king in Bologna. Given its status as the world’s oldest college town, there are plenty of gut busting but extraordinarily delicious cheap eats, as well as high-end dining options in the medieval city.

Stroll the Quadrilatero, a small maze of streets just off the Piazza Maggiore. They’re home to a host of vegetable, fish and cheese markets, as well as a number of cafes and wine bars. Satisfy a late afternoon snack attack with a hunk of mortadella and a glass of red wine at an outdoor cafe, but leave room for a rich dinner of pasta bolognese, the city’s signature dish. 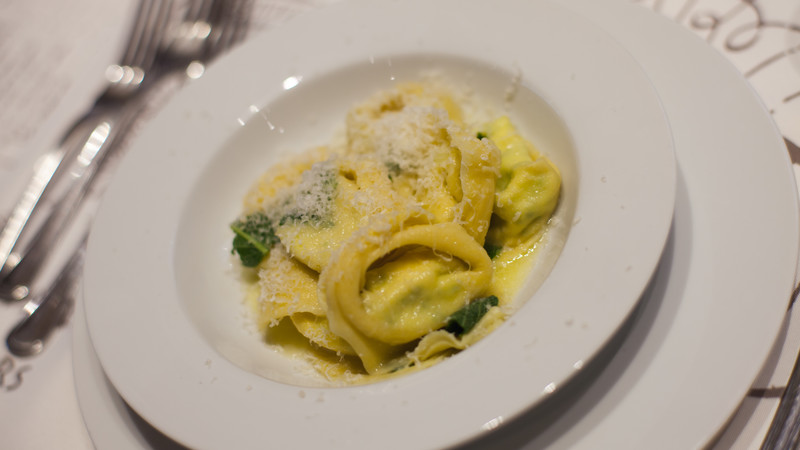 The tortellini I made at my pasta-making class!

While you might not be able to smuggle a container of bolognese in your suitcase, you can do the next best thing – learn to make it yourself. One of the highlights of my Intrepid Real Food Adventure to Bologna was a pasta-making class where we learned to make homemade tagliatelle pasta topped with bolognese sauce and cheese-stuffed tortellini.

While the little navel-shaped pastas are easy to eat, it took the skilled hands of the instructor to guide me through the precise steps of rolling the egg dough thin enough so “you can see the hilltop church of San Luca through it.” There’s no going back to Barilla after savoring the homemade treasures.

The pasta-making class on my Intrepid food tour

Craving ice cream? Try some of the city’s best gelato at Cremeria Funivia, a few blocks from the city center or La Sorbetteria Castiglione, which boasts several locations.

Milan is the fashion capital of Italy, and the most cosmopolitan city in the country. Here, it’s less about grandma’s casual kitchen, and more about traditional dining. And given the location in the north, butter, rice and meat rule menus as opposed to basil and pasta. 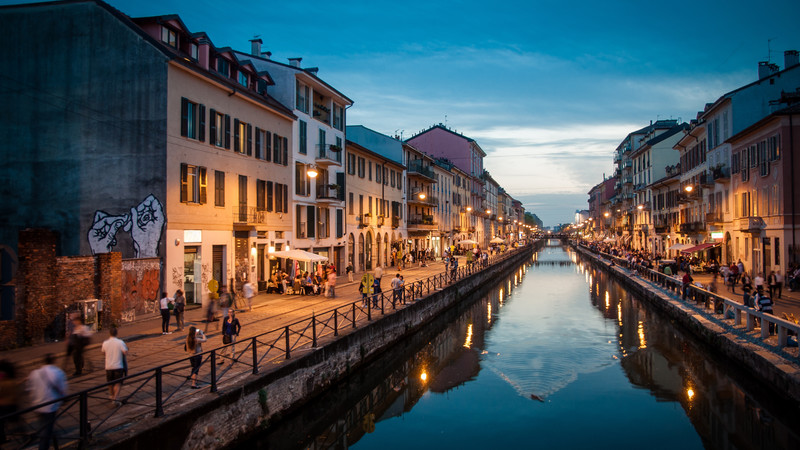 Prefer to nibble on a budget? Head out for an aperitivo, the Italian version of happy hour. In many bars, if you order a drink (typically a wine, spritz, or beer) in the early evening, bite-sized food is free, including focaccia, olives, rice, pasta, cured meats or pizza slices.

Satisfy your sweet tooth with a cream horns or Panarello cake (almond-flavored angel food) at Panarello bakery, in operation since the late 19th century. And while the Milanese may eat less ice cream than their southern neighbors, high-quality gelato can be found at several shops including Il Massimo Del Gelato, which always carries at least 6 to 8 chocolate flavors, and La Bottega del gelato where seasonal varieties are the highlight. 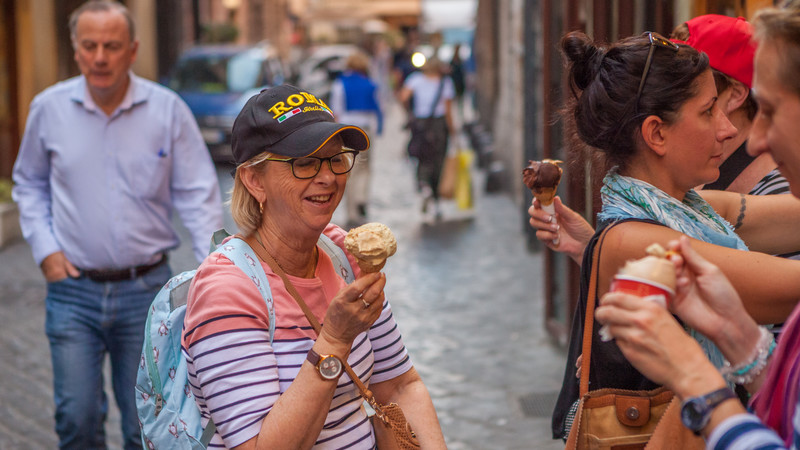 READ MORE: 6 CITIES TO VISIT IN ITALY BEFORE EVERYONE ELSE DOES

If, like me, your family traces its roots back to Southern Italy, or you crave the kind of comfort food typically found in the restaurants of Little Italies around the world, go to Naples. A walk through the small streets of the the Spanish Quarter is like a trip to your Italian grandmother’s house where the smell of olive oil, garlic and basil wafts through open windows.

The food of Naples is uncomplicated, and street food and homey trattorias rule the city. Pizza, of course, is the main attraction. The soft, chewy crust with slightly burnt edges will ruin you for life as you realize that outside of Naples, the thing you call pizza is not the same. 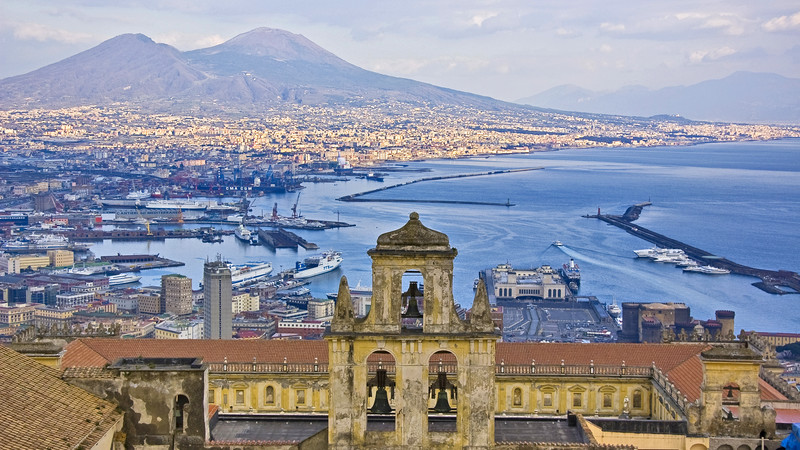 Naples, with Mount Vesuvius in the background

Try the Margherita at Pizzeria Brandi, the restaurant that invented it, or savor a slice at L’Antica Pizzeria da Michele of Eat, Pray Love fame which has been serving up prized pies for five generations. For a quick snack, pizza fritta (deep fried calzone) can’t be beat. Pizzeria d’è Figliole is the place that locals go for a late-night fix.

Head to one of the many locations of Cafe Mexico for a morning coffee (taken while standing at the counter), and always leave room for dessert. Sfogliatella is the city’s signature pasty. For the best ones, seek out bakeries that serve the flaky pastry warm from the oven. Cool down after a hot day in the Naples sun with a gelato. Gay-Odin serves up some of the best gelato in their small shop where they also produce handmade chocolates.

That´s was great. I love Italian foods and want to know more information regarding it so keep sharing such a new and interesting things.

Reading this made me miss Italy so much, the food is absolutely divine! As a vegan, I can really appreciate how easy it is to eat in Italy since the cuisine is so vegan-friendly. Love that you mentioned carciofi alla giudia which is one of my favorite dishes!

Hi, I found it very interesting and loving the blog tips from you! Valuable tips to plan your trip to Italy and avoid beginner mistakes. Congratulations on the site and this post will help a lot of people !!!