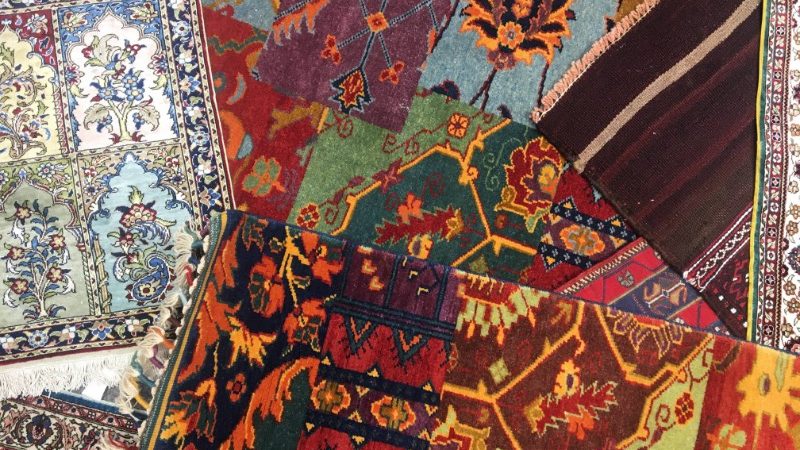 He strolled across the room and picked up a vibrant silk carpet, as gently as he would a baby. “Something like this, maybe one million or two million knots.”

Our jaws collectively dropped to the floor in disbelief. In a world of fast-fashion and mass production, the sheer amount of effort involved in the creation of one rug was astounding. Yet at the Desen Hali Co-operative in Bergama in Turkey, this is the way they had always operated. 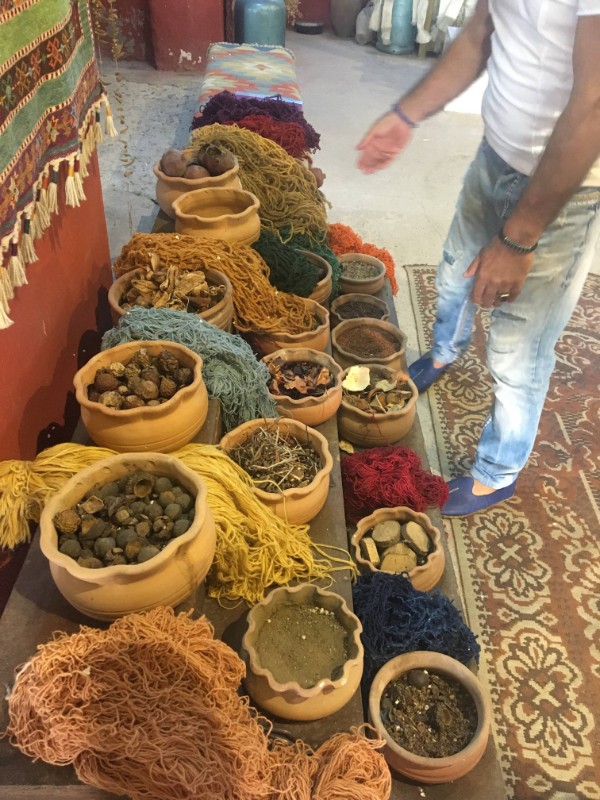 The yarn and natural dyes

VISIT TURKEY ON A SMALL GROUP TOUR WITH INTREPID

Situated in the Izmir province of western Turkey, Desen Hali is a co-operative women’s workshop that produces one-of-a-kind rugs. The initiative aims to empower women by teaching them the art of carpet making and providing them with the tools required to create the artisanal pieces. Necessary equipment such as looms, yarn and patterns are given to the women and once they have been properly trained, they are encouraged to work from home, to their own schedules. In addition to training and supplies, each employee has a stable salary and access to health care. Without the confines of time restraints, women employed at Desen Hali are free to simultaneously support their families and earn an independent living.

According to the World Bank, women in Turkey have historically contributed far less to the economy than men. In fact, as of 2015 only 31.5% of Turkish females are part of the workforce at all. Co-operatives enable women to be financially independent and gain self-confidence. Often the skills taught to them in these workshops are passed on to younger generations in their families, eventuating in long term positive change.

Upon arrival, our group was ushered into a large room filled with old machinery. While the requisite tea and coffee welcome drinks were prepared for us, Mr Solomon began explaining the intricacies of traditional Turkish carpet-making. Firstly, he showed us to a display with different ceramic bowls full of natural ingredients, each with colourful strands of dyed yarn beside them.“For centuries, Turkish carpet weavers have used vegetables and herbs to dye yarn. All manner of plants from saffron to tea leaves were used to create every shade of the rainbow. You can get anywhere from four, five, six colours from different parts of the same plant and still today, these techniques are used in Turkish carpet-making.”

He picked up samples from different pots and handed them around. Items like tree bark created predictable brown dye strands, but I was surprised to see wild mushrooms beside yarn of red and yellow.

“Today, we also use chemical dyes to make brighter colours. They don’t fade over time like the vegetable dyes do.”

Next, we were shown to a machine with a large vat of hot water and a loom of some kind attached. Before we could ask, another man dumped a bucket of white cocoons into the water and started to mix.“At Desen Hali, we extract silk the same way it has been done for hundreds of years.” 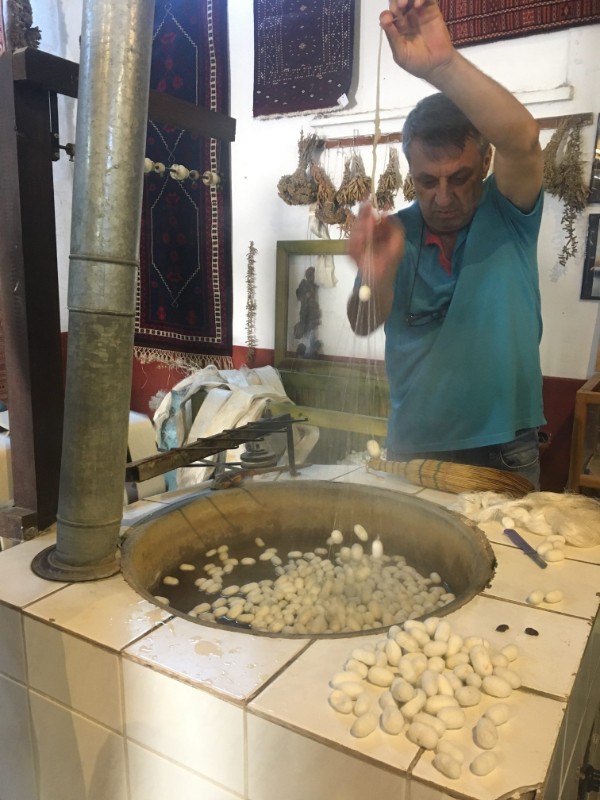 “They’re not alive, are they?” Someone from the group asks, pointing at the silkworm cocoons bobbing in the water.

“No,” Mr Solomon says, “I promise they’re not alive anymore.” The man agitating the water stops and plucks a few strands of silk from the vat, picking up five connected cocoons in the process. He then wraps the bunch of strands around one end of the loom and before we know it, metres and metres of the fine thread are unravelling from the cocoons and are being wound onto a giant spool.

READ MORE: EVERYTHING YOU NEED TO KNOW BEFORE VISITING TURKEY

“About 1000 metres can be extracted from one single cocoon. Silk is a very strong fibre.” Mr Solomon picks out a strand being fed onto the loom and pulls it hard to demonstrate. We all watch, mesmerised by the gentle tug and spin of the machine as it gathers more and more thread by the minute.

“We make both silk and wool carpets here. Silk is more expensive of course but takes much longer to create. Some rugs can take months, others can take years. The prices of each depend on time and difficulty.”

After taking turns touching the silk threads, we moved into the main weaving room. Every inch, from the walls to the floor, was covered in rugs of all colours and sizes. Some were vibrant and intricate, while others were block-coloured and pale. We each took our shoes off to walk on the carpets and feel the differences for ourselves.

“Now, sit next to someone and they will teach you how to make Turkish double knots. Persian single knots are used to make carpets in Afghanistan, China and India. But our technique makes the rugs very strong,” explained Mr Solomon. 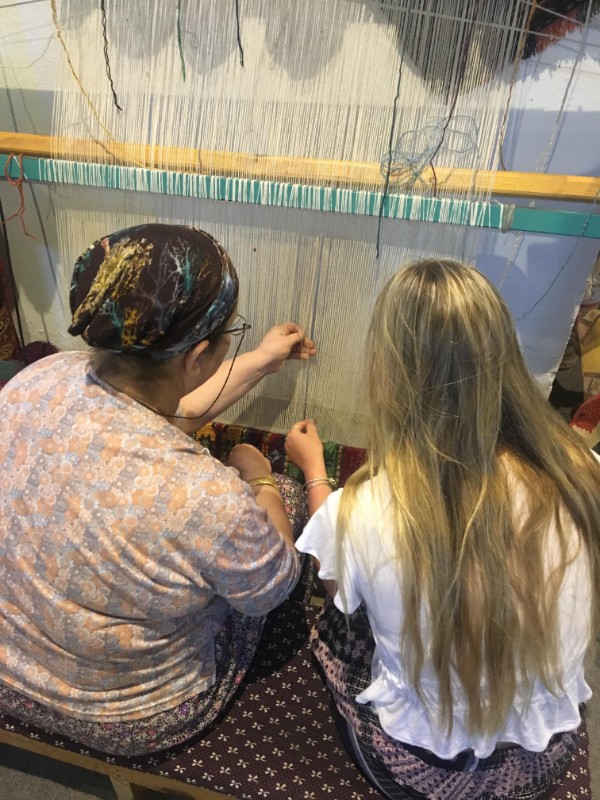 Learning from the best!

I spotted a young girl at the back of the room and took a seat on the bench next to her. The girl looked to be a teenager, no more than sixteen or seventeen, but her movements on the loom were full of confidence. She smiled at me and picked up some tools and began to demonstrate how it’s done. Her skilled hands picked up pieces of coloured yarn, wrapped them around the loom, tightened the knot and cut the extra length in seconds flat. Now it was my turn. My attempt to duplicate the knot took four times as long and resulted in a twisted mess. The girl and I laughed together.

The next several hours were spent drinking tea and admiring hundreds of rugs, while Mr Solomon explained how to determine a high-quality silk creation from a low-quality one made of wool. Learning about such an ancient craft and its importance in Turkish culture was an experience I will always remember. Often on trips to exotic locations, we become so fixated on seeing the sights that we miss out on the culture. Intrepid’s continued dedication to supporting ethical initiatives ensures that we as travellers get a nuanced perspective in each destination.

Book your place on an Intrepid trip in Turkey and visit the Desen Hali Co-operative, plus lots of other treasures. Many of Intrepid’s itineraries include visits to local community initiatives, as part of our responsible travel ethos.

All images by Emma Calley.