9 delicious foods to eat in Canada (that aren’t poutine) 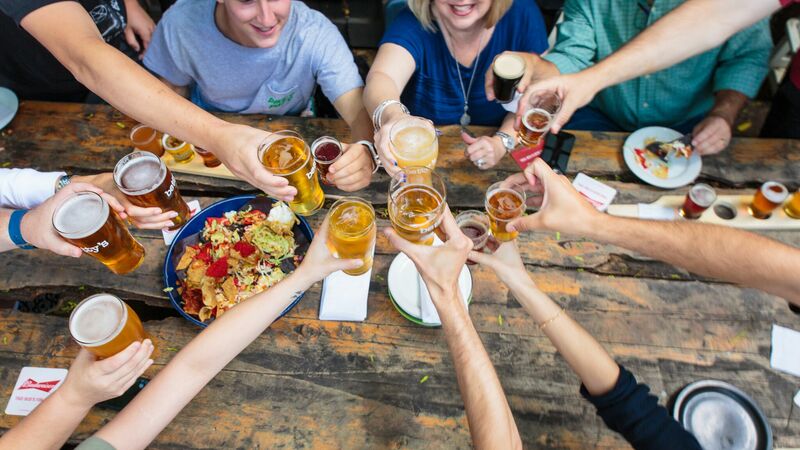 It’s cheesy, oily, carby and salty. Poutine is a dish that probably springs to mind when thinking about all the things you’re going to eat on your next trip to Canada.

And rightly so, the ubiquitous dish with hangover-slaying superpowers is a Canadian stalwart. But your list shouldn’t end there. Poutine, consisting of fries, cheese curds and gravy, is really just a starting point. 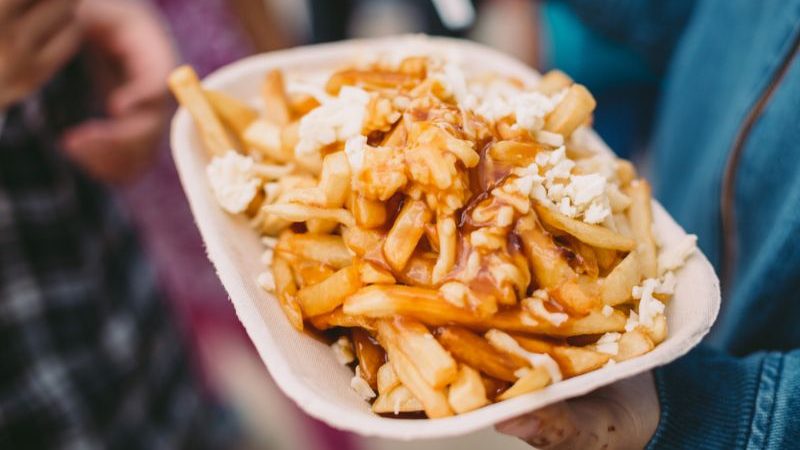 A must try, at least once. Photo by Habib Sajid.

From meaty sandwiches to a prized syrup that’s so good it’s attracted the attention of criminal enterprises, there’s much more to Canadian cuisine than poutine. Here are nine highlights to add to your list: 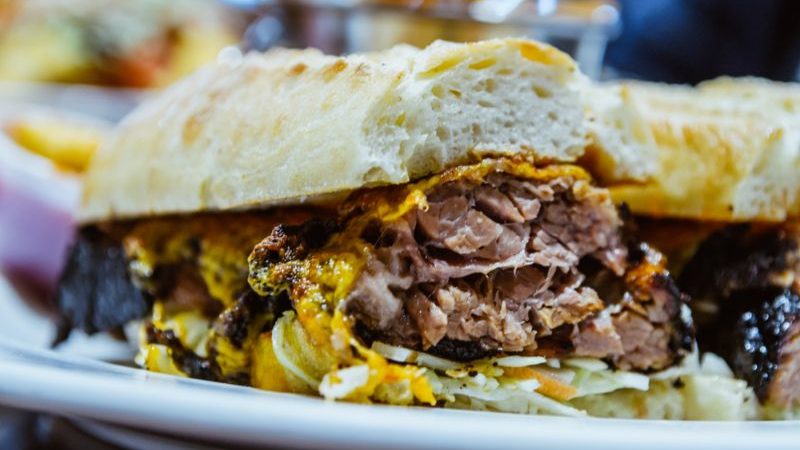 If you’re a carnivore, then all of Canada’s got you covered. Especially Montreal. An enduring staple that’s revered by locals and visitors alike, Montreal’s smoked meat sandwiches are famous for good reason. Featuring chunky cuts of beef brisket that’s been spiced, brined and smoked, then served with rye with a smattering of mustard, this godlike sandwich can be found in delis all over Montreal. Oh and expect crowds at some of the city’s long-serving institutions. The line-up is the price you pay for accessing supreme deliciousness.

CHECK OUT OUR RANGE OF SMALL GROUP ADVENTURES IN CANADA NOW 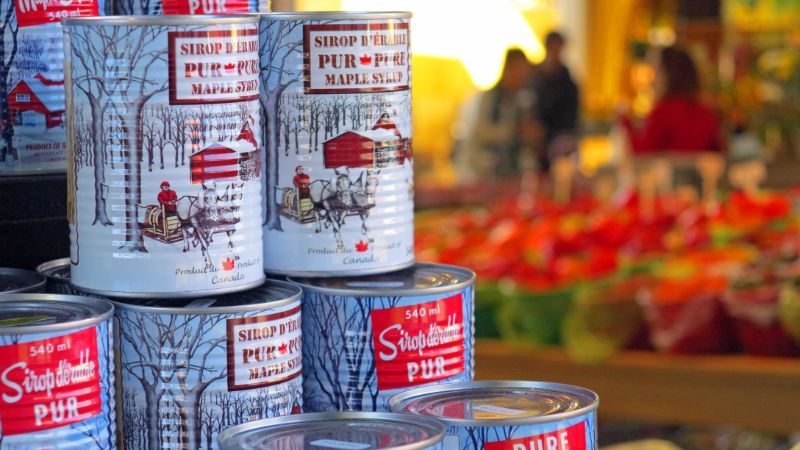 Sweet dreams are made of this. Photo by Jo Stewart.

With Canadian maple syrup fetching higher prices per barrel than crude oil, the sweet pancake bedfellow is big business in Canada. So much so, that between 2011 and 2012 a daring maple syrup heist was pulled off, resulting in precious syrup with a street value of more than $C18 million being siphoned out of barrels and sold to unsuspecting distributors. Obviously, any heist-worthy food must be tasted. Douse pancakes in it or learn how to make maple taffy in the snow, either way, when in Canada be sure to find a legal source of authentic maple syrup and go to town on the stuff – it’s criminally good. 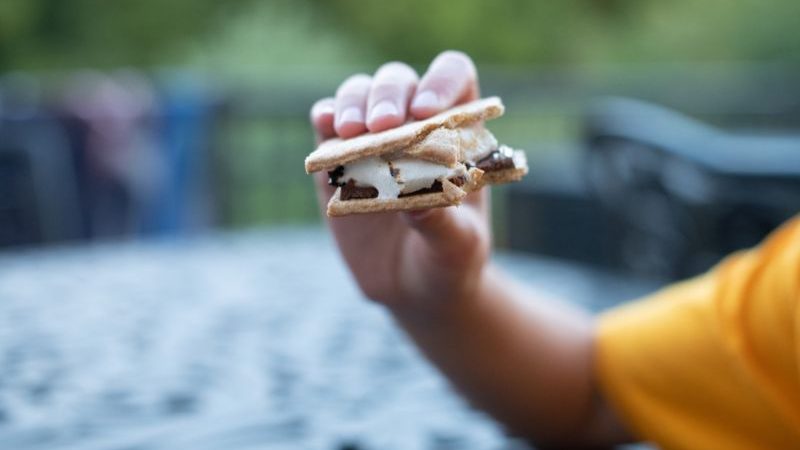 S’more for me, s’more for you. Photo by Melissa Balthaser.

Toasting marshmallows on a bonfire is great, but you know what’s even better? Taking that gooey, toasted marshmallow puff and wedging it in between a slice of chocolate and two Graham crackers. A North American campfire favourite that requires a patient approach (fly too close to the sun and you’ll end up with an incinerated marshmallow) the ritualistic act of coming together around a fire to make s’mores is half the fun (the other half is definitely eating it).

GET YOUR S’MORES FIX ON OUR 12-DAY REAL CANADA ADVENTURE, FOR 18- TO 29-YEAR-OLD TRAVELLERS. FULL DETAILS HERE 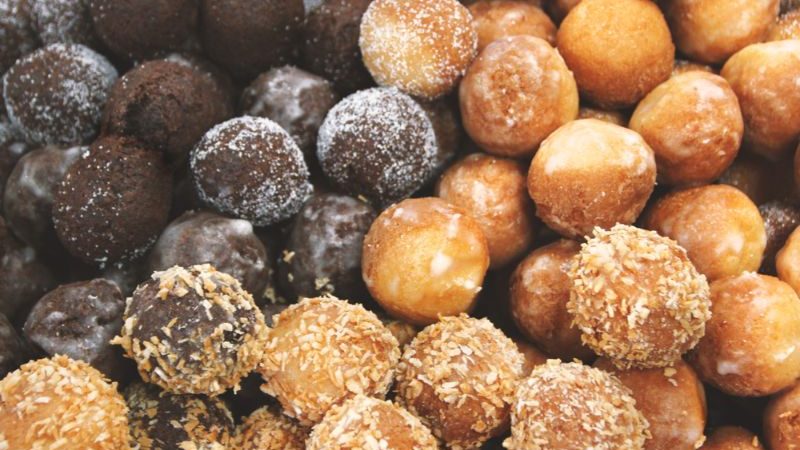 With more than 3800 outlets across Canada, it’s hard to miss Tim Hortons (especially since you’ll most likely be greeted by one at the airport). The subject of much debate (the company broke many hearts after merging with Burger King in 2014), this chain of coffee shops founded by a Canadian ice hockey player is one of those essential places you’ll need to visit to complete your Canada experience. Order a Timbits snack pack (a box of deep-fried donut balls) or if you like your coffee sickly sweet and super milky, try a Double Double (a coffee with double the cream and double the sugar). 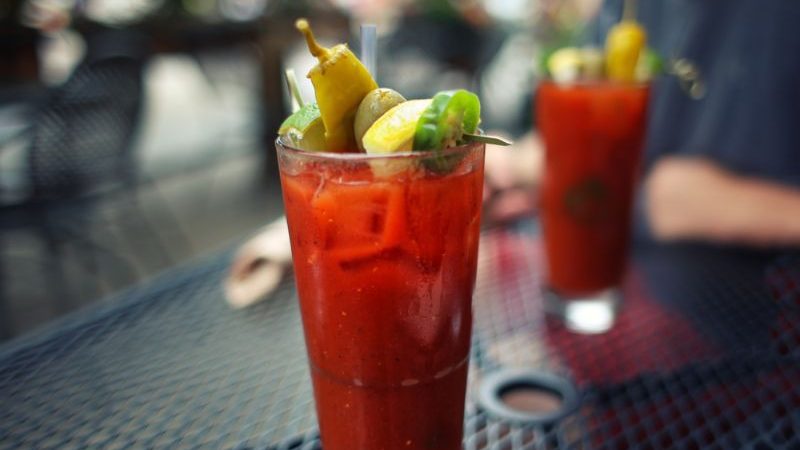 No, not the salad. In Canada, order a Caesar and you’ll most likely be served a vodka cocktail containing tomato juice spiked with clam juice (yes…clam juice), lime, hot sauce and Worcestershire sauce. Also known as a Bloody Caesar, this tangy, mollusc-infused cocktail may perplex visitors but to Canadians it’s a certified brunch favourite. 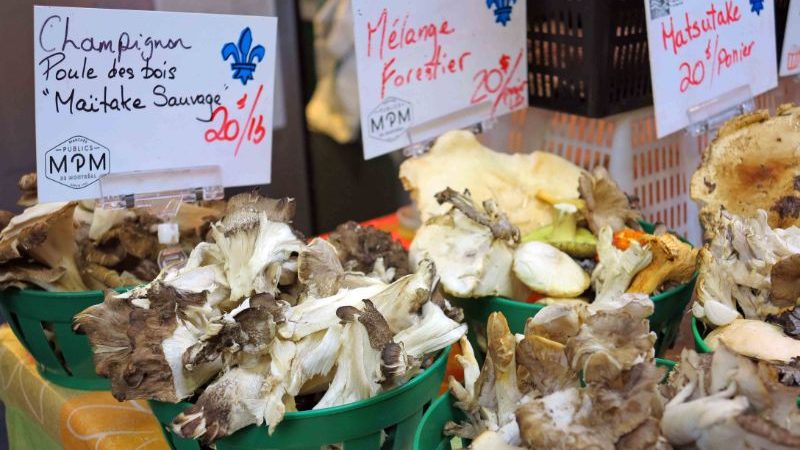 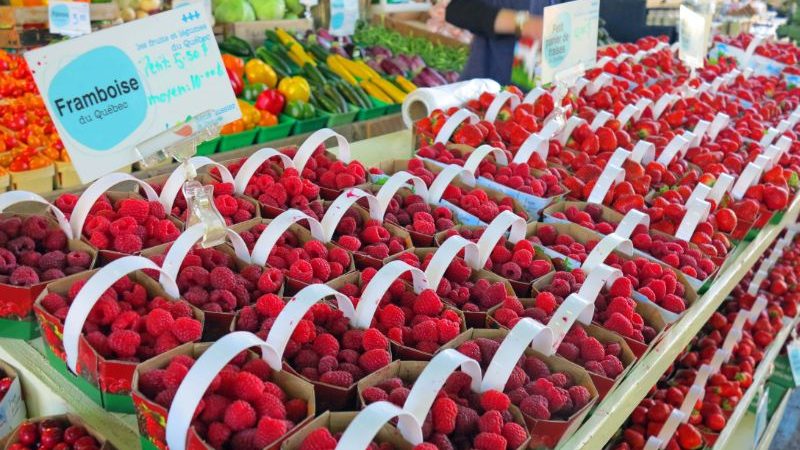 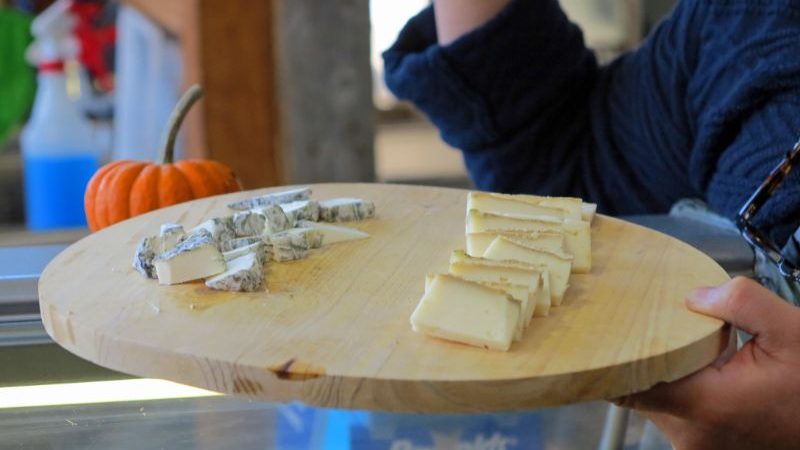 From Vancouver’s Granville Island Public Market to Montreal’s historic Jean Talon Market, some of Canada’s best foodie finds are in its markets. You’ll not only find foraged mushrooms, fresh cranberries, handpicked wild berries, heirloom vegetables, and aged cheese that will bring you to your knees (in a good way). You’ll also meet passionate producers and shopkeepers who are carrying on a family business tradition that’s been passed down the line for generations. You might not remember every meal you eat in Canada, but you’ll definitely remember the guy who waxed lyrical about chanterelle mushrooms for half an hour. 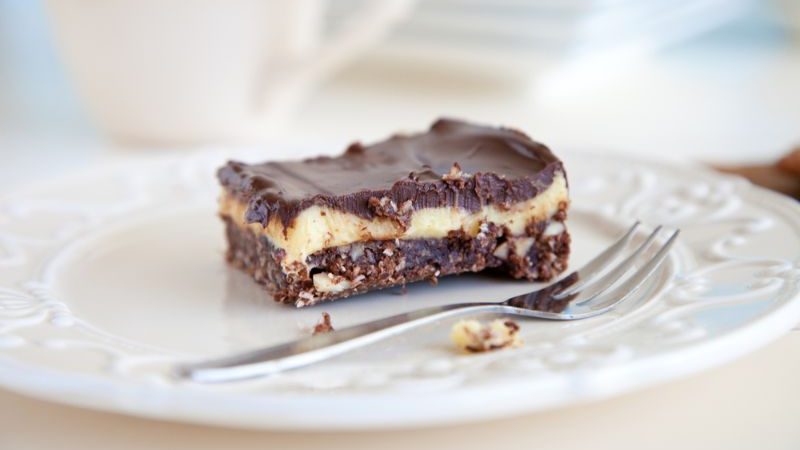 This sweet, no-bake dessert named after the city of Nanaimo on Vancouver Island is easy to make and even easier to eat. Consisting of a crunchy biscuit base topped with a layer of creamy custard and a top layer of chocolate, this dessert is a Christmas tradition for many Canadians but thankfully can be found in cafes and bakeries all year round. Lobster traps (and a couple of cats). Photo by Steve Smith.

After you’ve shamelessly relived all your childhood Anne of Green Gables fantasies on Prince Edward Island (PEI), keep the good times rolling with a lobster feast. Home to more than 1200 lobster fishers, the PEI community has a long history connected to lobster fishing. The perfect place to don an oversized plastic bib and get cracking, you can make all your lobster dreams come true on PEI. Sit down to a fancy lobster supper, pick up a cheeky lobster roll from a food truck, and try lobster mac and cheese at a beachside shack. You can even double down and tick off two Canadian culinary traditions in one meal by ordering lobster poutine. Oh, Canada.

EAT ALL THE LOBSTER ON OUR 15-DAY NOVA SCOTIA & NEWFOUNDLAND EXPEDITION. FIND OUT MORE HERE.

One of the best things about travelling is cruising the supermarket aisles to discover all-new snacks you’ve never seen before. Japan may be the undisputed king of releasing the best limited edition Kit Kat flavours, but Canada’s supermarket snack trump card is all-dressed potato chips. Invented in Quebec in the 1970s, the all-dressed chip is a mash-up of four strong flavours: barbecue, ketchup, salt and vinegar, and sour cream and onion. It shouldn’t work. But it does. A trusty companion for long bus rides, mountain hikes, camping trips and more, pack a bag of all-dressed chips in your backpack and you’ll make friends easily in Canada.

Join us on a small-group adventure in Canada now, and eat ALL the food (and a bit of poutine too). Explore our range of tours here. 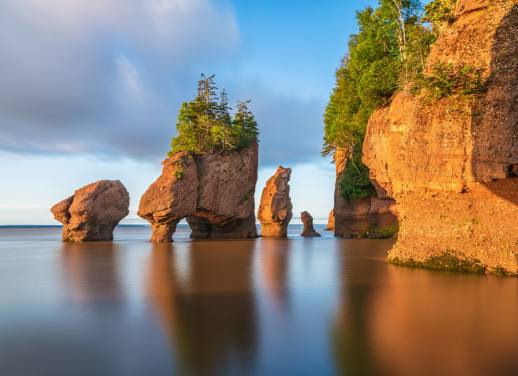 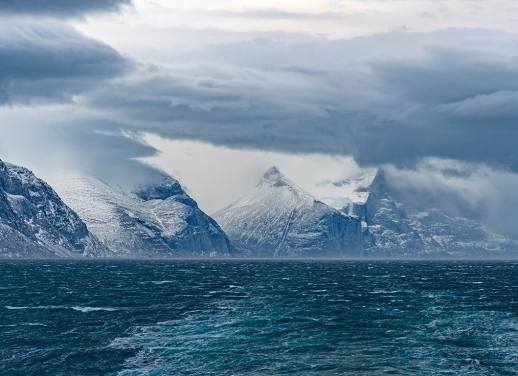 Best of the Western Arctic: Canada and Greenland from Toronto
20 days
View trip 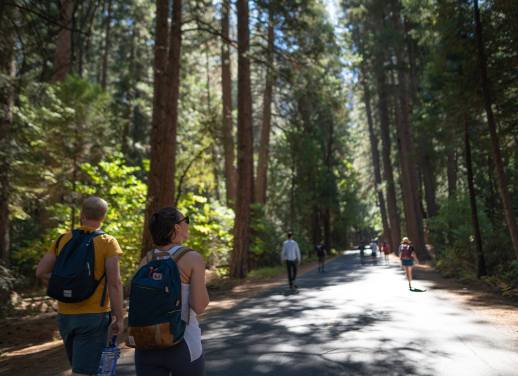