Home » The 15 most beautiful waterfalls in the world
Features

The 15 most beautiful waterfalls in the world 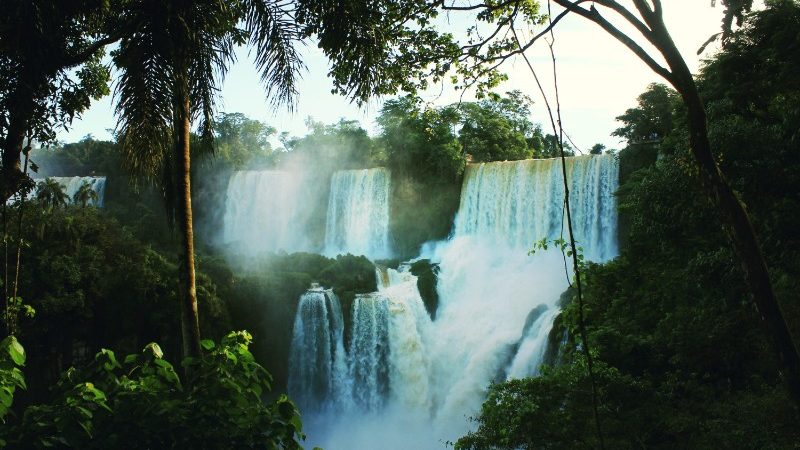 Waterfalls have been awe-inspiring forces of nature for ages, and people travel from all over the world to experience one of the most incredible natural wonders on earth. There are several hundred waterfalls in the world, from Havasu Falls in the Grand Canyon to Maine and the Niagara Falls on the US/Canada border. However, the most beautiful waterfalls are not always the tallest, Plitvice Waterfalls in Croatia for example, shows off 16 lakes falling into one another, creating a series of waterfalls and cascades.

So get ready to view these iconic waterfalls at their very best. 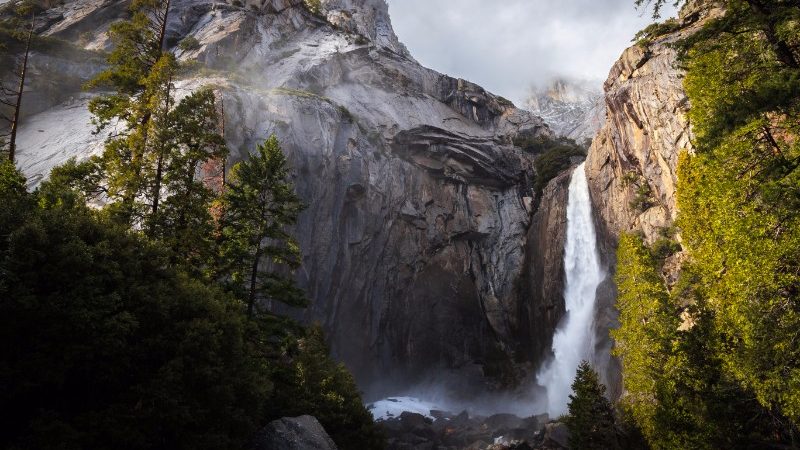 Yosemite Falls is one of the world’s tallest waterfalls at 2,425-feet. It’s actually made up of three separate falls: The Upper Yosemite Fall, the middle cascades, and the Lower Yosemite Fall. If you’re up for it, take an all-day hike to the top of the falls for some seriously incredible views. Other falls you may know from Ansel Adam’s personal collection include Sentinel Falls, Ribbon Fall, and Bridalveil Fall, all in Yosemite. Visit in a shoulder season like Fall (September, October, November) and you’ll get trails largely free of tourists (not to mention some spectacular foliage). 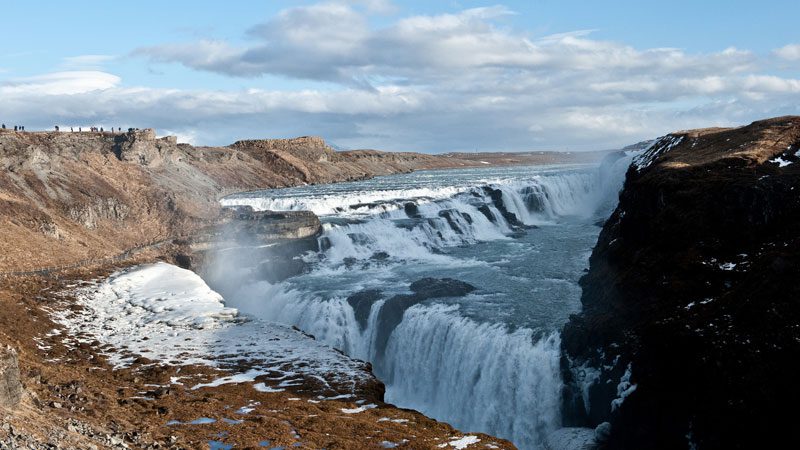 Gullfoss Falls is fed by Langjökull, Iceland’s second largest glacier. It was designated as a nature reserve in 1979. Visitors can watch the water as it crashes down into an incredible canyon. Try to visit Gullfoss when the sun is shining (not always easy in Iceland) – you may catch a glimpse of a beautiful rainbow as the light hits the rising water vapour. 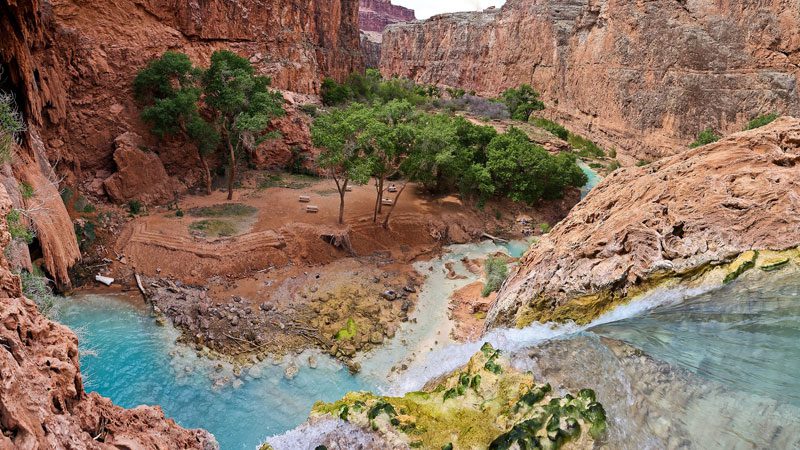 Havasu Falls is found on Havasu Creek. It’s often visited by hikers, who take a 10-mile stroll each way to the falls. You can strap on the sneakers and take the hike alone, or visit the falls on a guided tour. Tip: Make sure you bring a full water bottle with you; as there is none for the first six miles of the hike.

Also known as Iguassu Falls and the Iguacu Falls, this iconic waterfall originates from the Iguazu River and forms a boundary between Argentina and Brazil. It’s actually the only falls in the world that’s part of two UNESCO World Heritage Sites, the Iguacu National Park in Brazil and the Iguazu National Park in Argentina. It’s made up on 275 individual drops that stretch for 1.7 miles, and you can view the falls from either the Argentine or Brazilian side (the Argentine side is generally considered better for photo opportunities, especially because it gives you access to the Devil’s Throat).

READ MORE: ARGENTINA VS BRAZIL: WHICH SIDE OF THE IGUAZU FALLS SHOULD YOU VISIT? 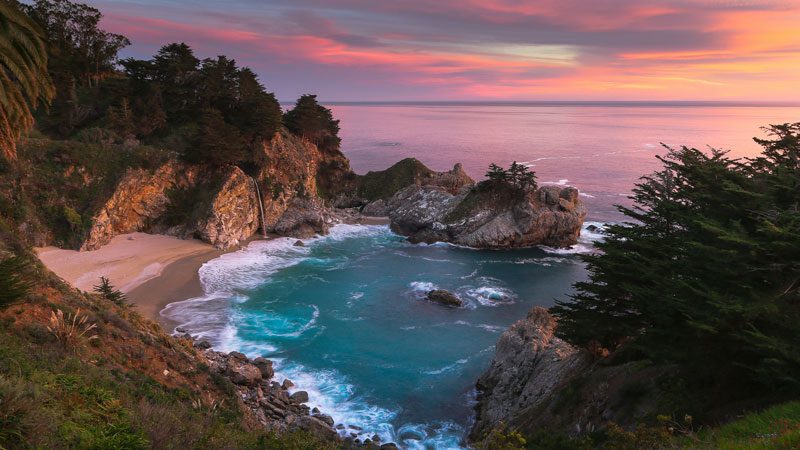 McWay Falls is one of the most majestic sights in California and is located in Julia Pfeiffer Burns State Park. It’s an 80-foot waterfall that continuously flows year-round. You can see it traveling along Highway 1 or, for a closer look, hike the trail than runs right up to the falls. You’ll get a great view of the falls as they tumble into the Pacific Ocean.

You’ll find Fairy Falls in New Zealand’s Waitakere Ranges Regional Park. It consists of a variation of upper and lower falls. Travellers can walk around the falls on a hot summer day and even go for a swim. When you’re done, explore the subtropical rainforest, black-sand beaches and scenic coastline. If you’re in the area, try to get to Kitekite Falls and Karekare Falls as well – they’re almost as beautiful as Fairy. 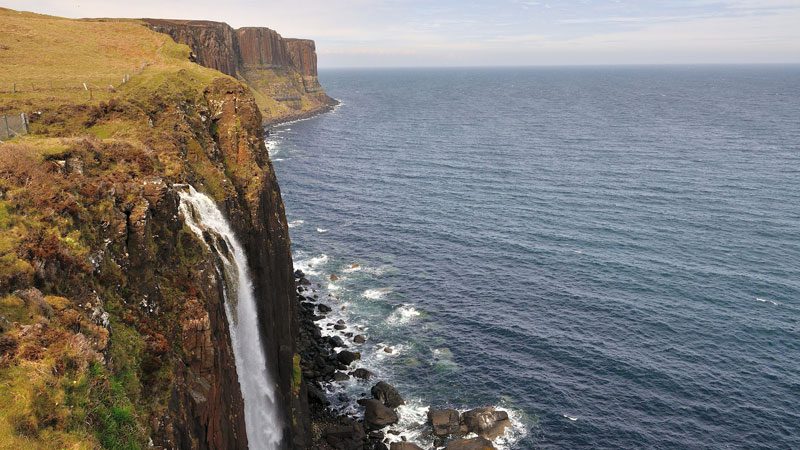 Make your way to the Trotternish Peninsula for spectacular views of Kilt Rock and Mealt waterfall. The Kilt Rock resembles a Scottish kilt (duh) and Mealt Falls was named after Loch Mealt, the freshwater lake it feeds. Visitors can watch the water fall unbroken for 170ft before it hits the sea below. 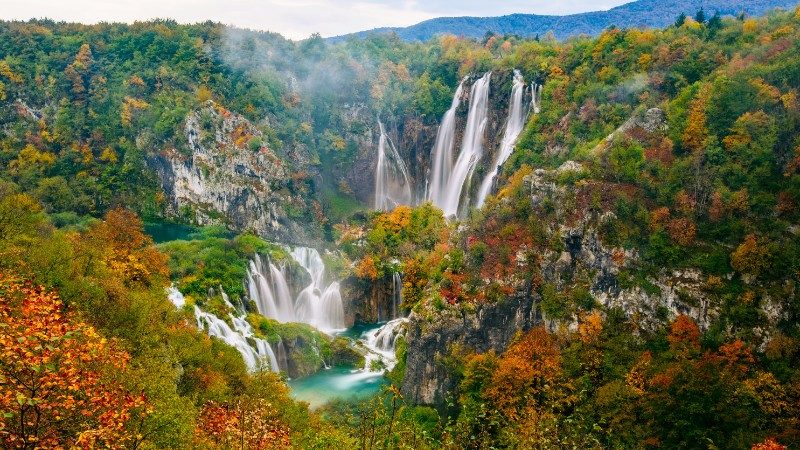 Plitvice Waterfalls is located in Plitvice Lakes National Park. Walk on foot or ride in one of the park’s free boats to the incredible waterfalls, where you will see 16 lakes falling into one another in a series of aquamarine cascades. A lot of travellers hug the coast when they visit Croatia, but Plitvice is a natural wonder that’s worth travelling inland for. As you walk the 18 kilometres of wooden footbridges, look up: butterflies swarm here in their millions, creating colourful clouds between the forest canopy. 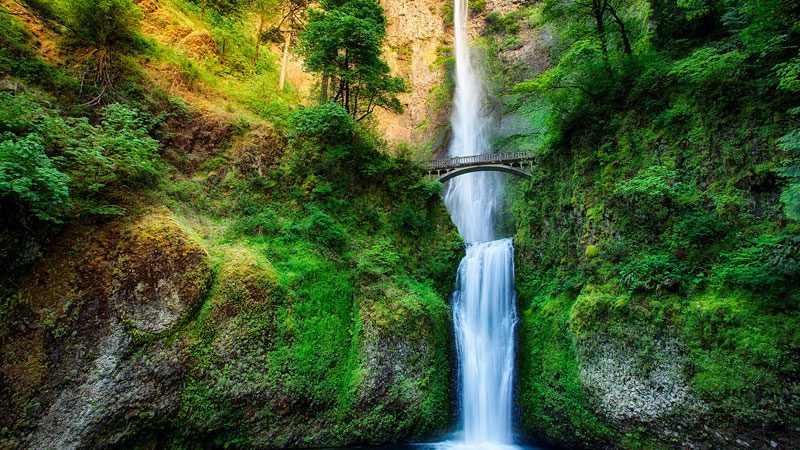 The Multnomah Falls was formed as a result of the Missoula Floods, and it’s the tallest waterfall in Oregon (for those of you playing at home). There are two major sections of the falls; the upper falls at 542 feet and the lower falls at 69 feet. Thanks to the underground springs from Larch Mountain, Multnomah is a year-round waterfall. Bonus: Multnomah is located just a 30-minute drive away from Portland, and you can see the top part of the falls right from the highway.

Formed by receding glaciers, Niagara Falls links the international border between the U.S. and Canada and is one of the biggest tourist attractions in both countries. It consists of three waterfalls: The Horseshoe Falls (the most powerful waterfall in North America), the American Falls, and the Bridal Veil Falls. The falls are located on the Niagara River and they have a combined fall with the highest flow rate of all of the world’s waterfalls. Don’t expect a tranquil visit though: there’s rarely a time of year when the falls aren’t packed with selfie-snapping tourists.

Victoria Falls lies on the southern bank of the Zambezi River and is considered to be one of the greatest attractions in all of Africa. According to victoriafallstourism.org, “Victoria Falls is the only waterfall in the world with a length of more than a kilometer and a height of more than hundred meters. It is also considered to be the largest fall in the world.” Take that Niagara. The best way to see Vic Falls is to take a boat ride from the lesser-known Zambia side – you’ll get right up close to the spray. 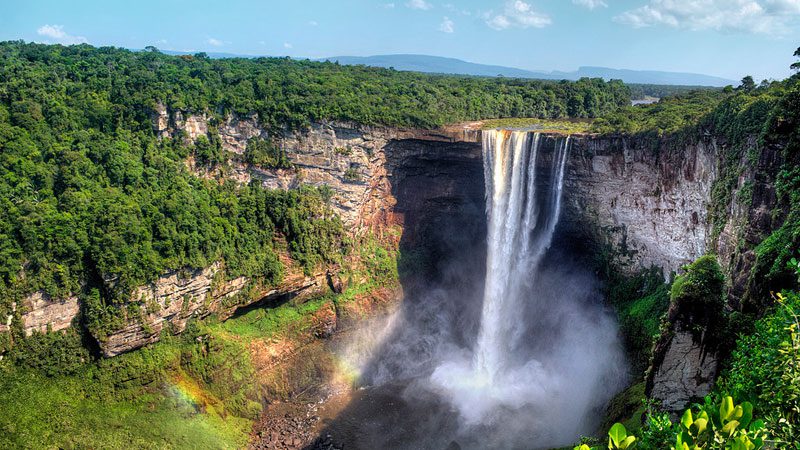 Head to Guyana and visit the world’s widest single drop waterfall…Kaieteur Falls. It is located in Kaieteur National Park, right in the heart of the Amazon forest. The falls are considered to be one of the tallest and most powerful in the world. They are higher than Niagara Falls and Victoria Falls, standing at 820 feet tall. Unlike Niagara and Victoria though, the world travel population doesn’t really know they exist. Pick the right month and you could get the spectacle all to yourself.

Torc Waterfall is a popular tourist attraction: buses and coach tours running from nearby Kilarney commonly stop and view the scenery. It’s best to go to the highest point of the mountain. There’s an amazing view over the surrounding countryside, and you can see the Torc falls…falling away before you. Tip: Take the Kerry Way trail, a nine-day tour that takes you to the Torc Waterfall, as well as through some of the most incredible sights in Ireland. 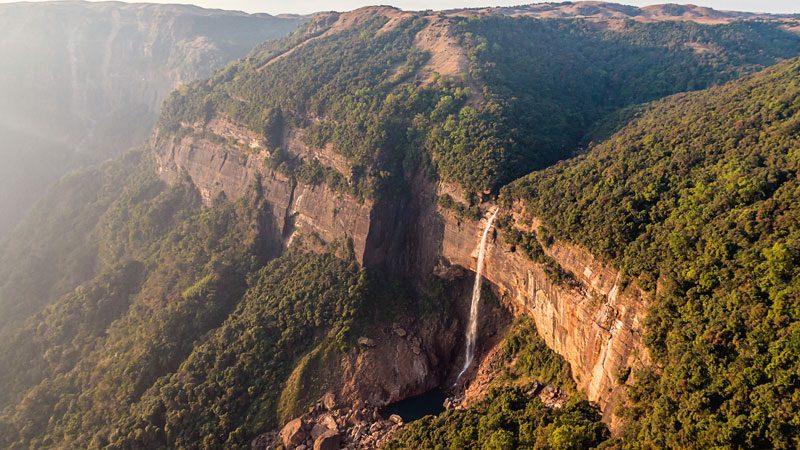 Nohkalikai Falls is India’s tallest plunge waterfall at 1,115 feet high. The setting is photogenic enough, but most people recognise it by the way its waters change colour with the seasons. In summer the water runs green, in winter, blue. If you love adventure, Nohkalikai Falls offers the opportunity to go camping, bird watching, swimming, and trekking. Tip: Visit the falls in September and October for stunning views and clear skies.

Langfossen Falls is also known as Langfoss. It stands at approximately 2,008 feet and tumbles down a huge mountain into the waters of Akrafjord. The World Waterfall Database (yep, that’s a thing) states, “we cannot stress with enough emphasis how impressive Langfoss is, and that it is without question a legitimate waterfall and ultimately the regulation of Mardalsfossen is what allowed Langfoss to take the title of Norway’s best.” That’s a pretty big endorsement – Norway’s fjordlands aren’t short of waterfalls…

This post originally appeared on The Active Times. Feature photo by Julia Caesar on Unsplash. 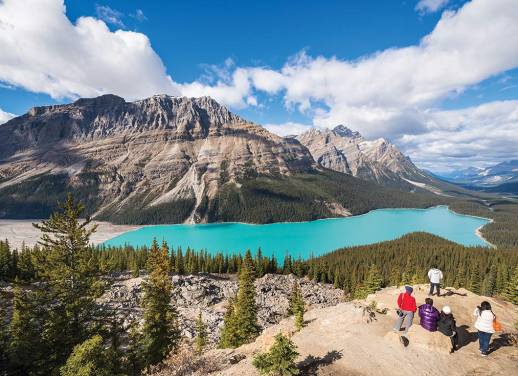 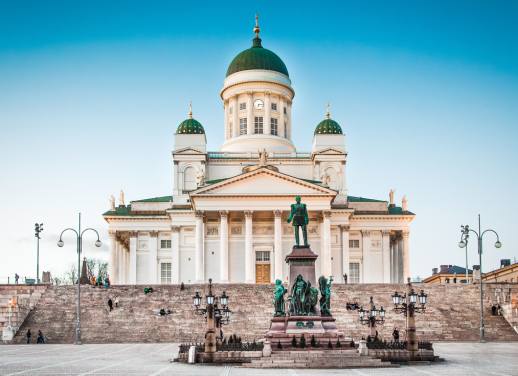 Nicole is the travel editor for The Active Times.

You clearly haven’t been to Southeast Asia….

Breathtaking, these falls are incredible!

These places are very suited for those adventurous travelers that are looking for new experiences.
These are also good for other travelers to discover new things. You can travel with your family, partner, or friends for more fun.

Your pic from Yosemite is of Bridalveil Falls, not Yosemite Falls. Yosemite Falls is a couple of miles further east in the valley, and on the other side. It’s also one hell of a lot higher than Bridalveil.

There’s something so magical about waterfalls. We recently went to visit four waterfalls local to us in South Wales, UK. Although they are nothing in comparison to the falls you have displayed here, they were beautiful nonetheless!

Victoria Falls is far more beautiful and powerful than Niagara Falls. When you walk the length of the Falls or take the helicopter ride over them, they are amazing. Not as commercial and more natural.

You forgot the most amazing waterfalls of all Iguazu! I have seen a number of these waterfalls and none of them compare to Iguazu!