Home Features 7 waterfalls you should visit in Iceland
Features

7 waterfalls you should visit in Iceland 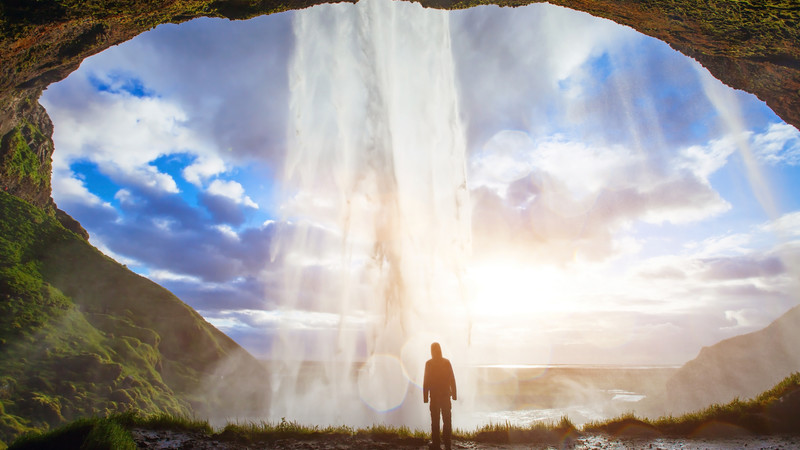 Iceland is one of those magical countries where the landscapes leave you full of awe and wonder.

It seems as though you can’t drive more than a few miles without seeing a waterfall and they all practically beg for you to stop in your tracks. The waterfalls are one of the many reasons I fell in love with Iceland, and they seem to keep pulling me back for more.

With so many waterfalls throughout the country, it’s hard to decide which ones you just have to see for yourself. To help you out with your decision-making process, here are seven waterfalls in Iceland that are not to be missed! 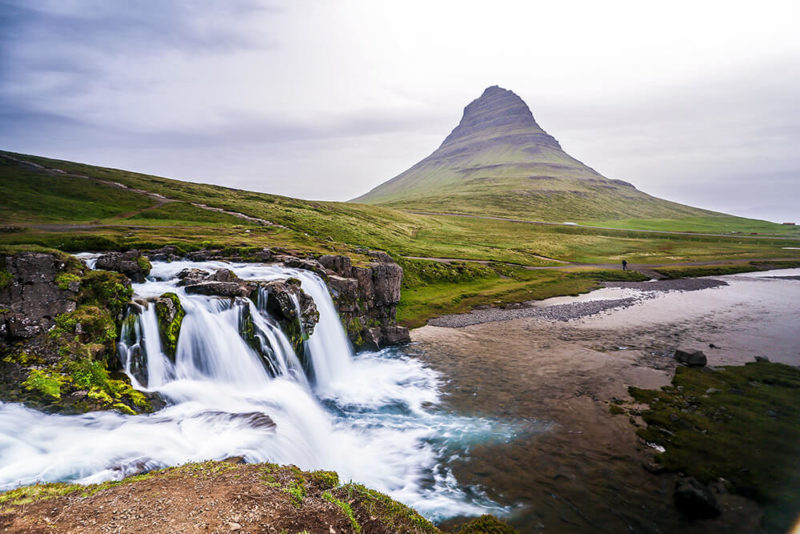 Located on the northern side of the Snæfellsness peninsula, Kirkjufellsfoss is only 5 meters high, but it’s the surroundings that really make this waterfall shine. While the waterfall is indeed beautiful in its own right, one of the main draws is the impressive mount Kirkjufell located nearby. When looking at the waterfall from the right angle, the 463 meter high mountain towers behind the falls in the background. The waterfall can be seen from the road, but to get the iconic views, park in the nearby parking lot and hike up the short trail that crosses over to the opposite side of the falls.

For more fun in the area, visit the Viking village in the nearby town of Grundarfjörður, or make your way to the adorable town of Stykkishólmur just over a half hour away. On your way to Stykkishólmur you’ll pass the quirky Bjarnarhöfn Shark Museum and drive through Berserkjahraun, a huge and otherworldly lava field; both prime spots for a pit stop.

READ MORE: 6 EXPERIENCES EVERYONE SHOULD HAVE IN ICELAND 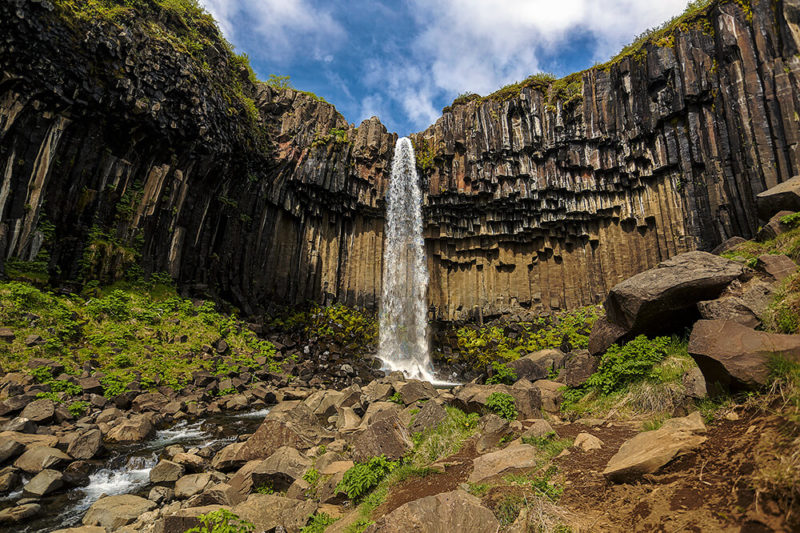 On the south coast of Iceland, in Vatnajokull National Park, you will find a waterfall unlike any other. A 1.5 kilometer hike will take you from the Visitor Center to Svartifoss, a 12 meter high waterfall. The hike to get to Svartifoss is moderately easy, but it does contain some very steep inclines. Once you arrive at the falls, you will find the white waters of the falls cascading over dark, hexagonal rock formations called basalt columns. Basalt columns are formed from hardened lava, and they are fascinating to see in person.

The landscape of Svartifoss has inspired the architecture of a couple sites in Reykjavik including the Hallgrimskirkja church and the National Theater of Iceland. Plus, Vatnajokull National Park offers plenty of adventure activities such as glacier hiking, ice climbing, camping and many miles of trails for hiking. 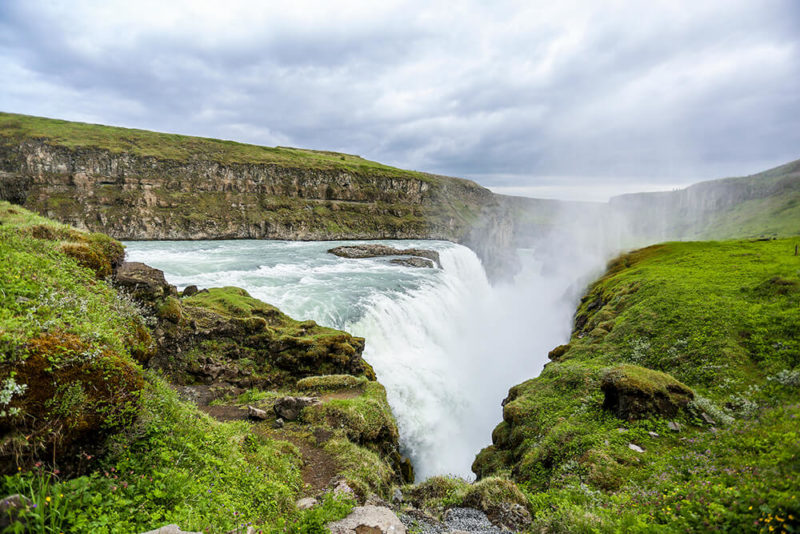 The Golden Circle is one of the most visited regions in Iceland, in part because of its proximity to Reykjavik and also due to the three iconic sites along its path: Geysir, Thingvellir National Park and the waterfall, Gullfoss.

From some angles, Gullfoss appears to disappear into thin air as it falls 32 meters into the narrow gorge below. Just by standing at the edge of the waterfall, you can feel its immense power as you are engulfed in a cloud of mist. Be sure to stop at the nearby Geysir Hot Spring Area to see Strokkur, a geyser that shoots water 30 meters into the air every few minutes.

Thingvellir National Park is also worth a visit for its hiking trails, the historic Thingvellir Church, and even snorkeling or diving in the mesmerizing Silfra rift. 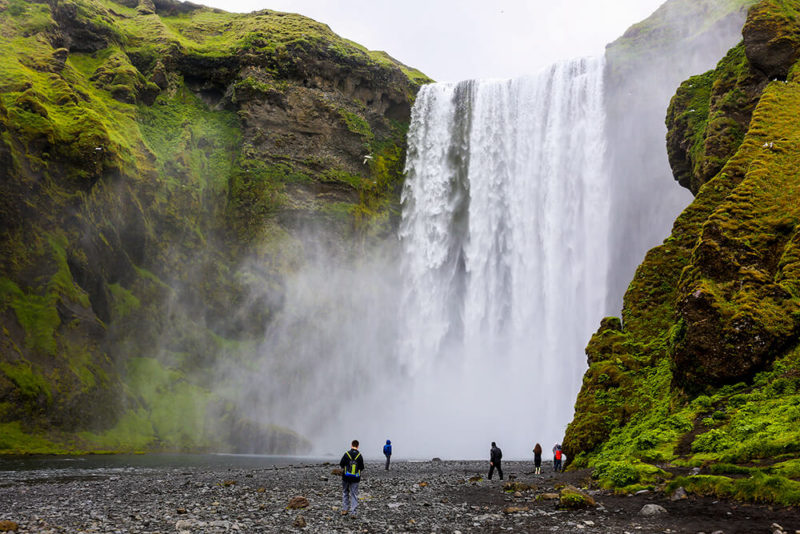 When driving along the southern coast of Iceland on Route 1, Skogafoss is a difficult waterfall to miss. It is around 60 meters tall and 15 meters wide, which makes it one of the five largest waterfalls in Iceland. Because of the large amount of spray the waterfall produces, visitors can often see a double rainbow in front of the waterfall.

For a different perspective, climb the hundreds of stairs next to the waterfall to get views of the Skógá River and Skogafoss from above. Just down the road from the falls, you can see grass roofed houses at the Skogar Museum. Around 30 minutes from Skogafoss, is the town of Vik, where you can see black sand beaches and the Vikurprjon Wool Factory.

RELATED: 6 HOT SPRINGS IN ICELAND EVEN BETTER THAN THE BLUE LAGOON 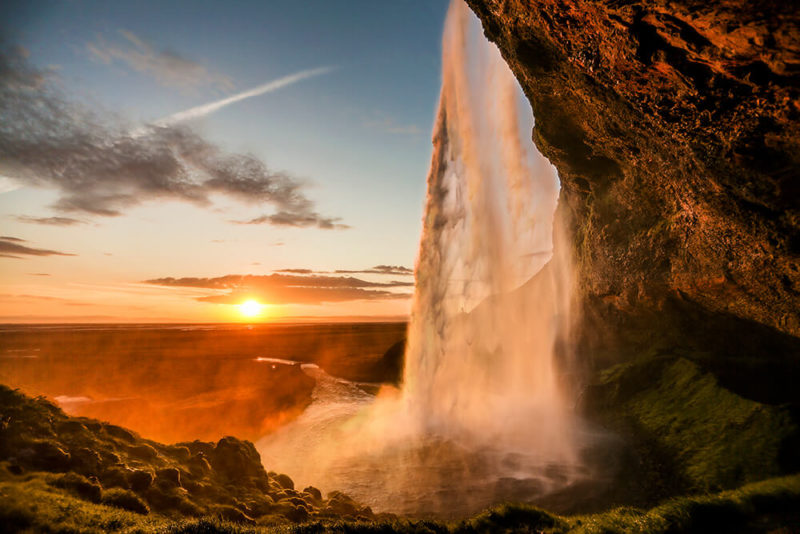 Not far from Skogafoss, you will find another famous Icelandic waterfall. Access to Seljalandsfoss is provided through the farm of Seljaland, which is just a short drive off of Route 1, on the south coast of Iceland.

The height of this waterfall is around 63 meters, and the real draw of Seljalandsfoss is that you can actually walk behind it. Views from the path behind the falls are spectacular, especially with the midnight sun shining in the background. Seljalandsfoss is easily accessible from the on-site parking lot and there are camping facilities nearby that offer wonderful views of the waterfall.

PUSHED FOR TIME? CHECK OUT OUR 5-DAY ‘ICELAND EXPRESS’ TRIP

Next to Seljalandsfoss, you will find a hidden waterfall just a short distance west. Gljufrabui is located behind the Seljaland farm and campground, and it is partially blocked by a canyon. The canyon makes the waterfall a bit difficult to locate; however, putting in the effort to find it is well worth your time.

To view this 40-meter-high waterfall, you can either hike a short distance into the canyon through the river, or you can climb a steep path up the cliff to see the waterfall from above. Both hikes can be dangerous so require caution. The hike up to Dynjandi is a bit of a strenuous climb, as it gains an elevation of roughly 200 meters in a short distance, so be ready for a hike. Arnarfjörður fjord, one of the biggest fjords in the Westfjords, is located near the falls, and with 35 species of birds calling the fjord home in the summer, it’s a prime spot for birdwatching.

There you have it; seven must-see waterfalls in Iceland! There are countless other waterfalls that could be added to this list, as well, so jump on a flight to Iceland and discover them all for yourself. It will be an adventure you won’t forget.

7 waterfalls you should visit in Iceland was last modified: June 25th, 2019 by Jenna Kvidt
beautyHikingIcelandnatureWaterfalls 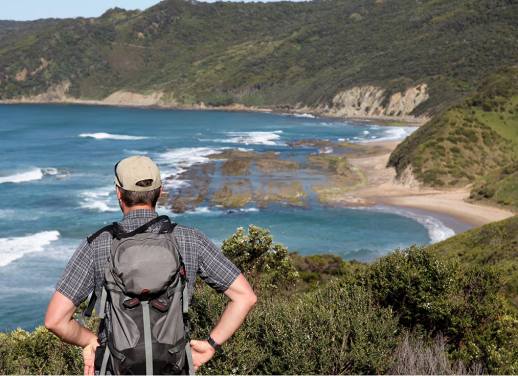 Jenna Kvidt is based in St. Paul, Minnesota, and is one of the co-creators of the travel website, Wander The Map (wanderthemap.com). Along with her husband Micah, she travels the world in search of outdoor and urban adventure and they document it all in photos and videos along the way. 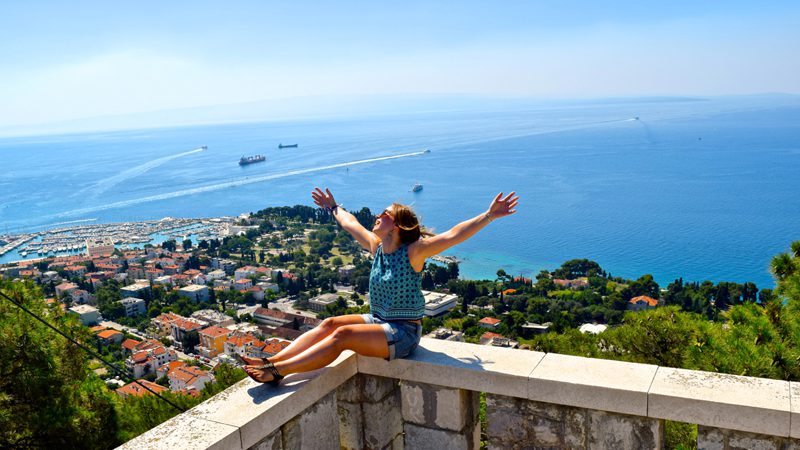 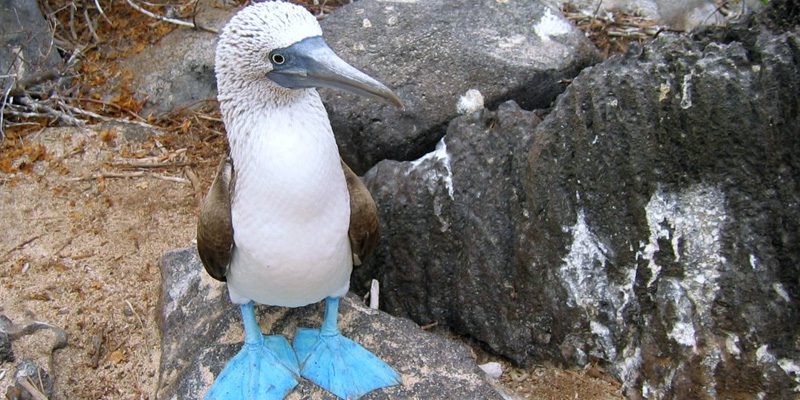 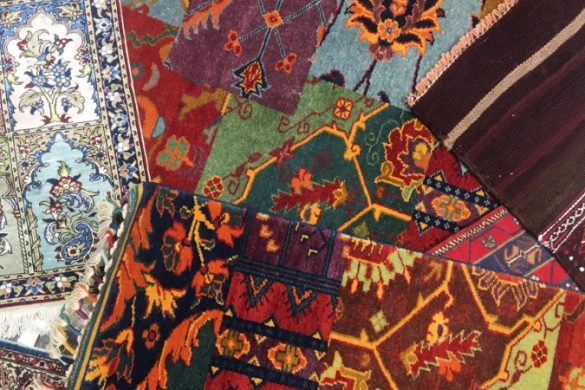 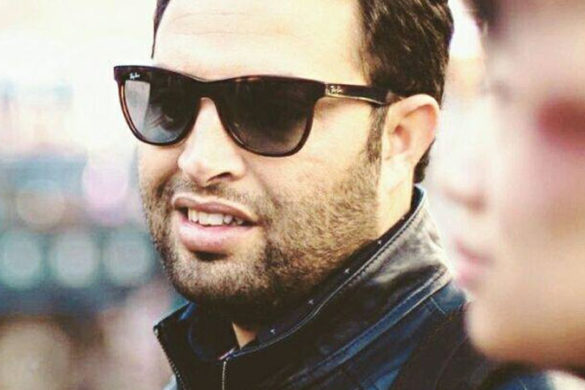 ‘Travellers change my life and I change theirs’: meet Moroccan local leader Khalid

The most famous US Presidential trips of all time 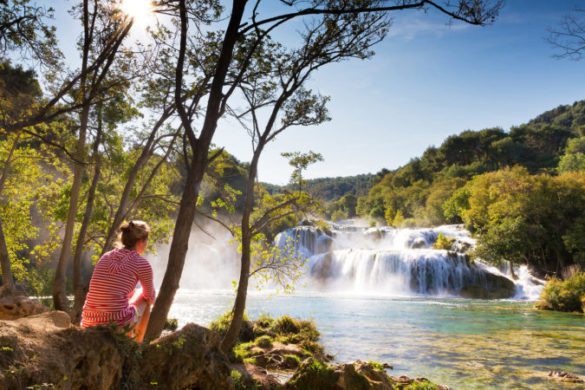 The 5 best countries in Europe for solo travel

Why you should hike Everest Base Camp before your 30th birthday 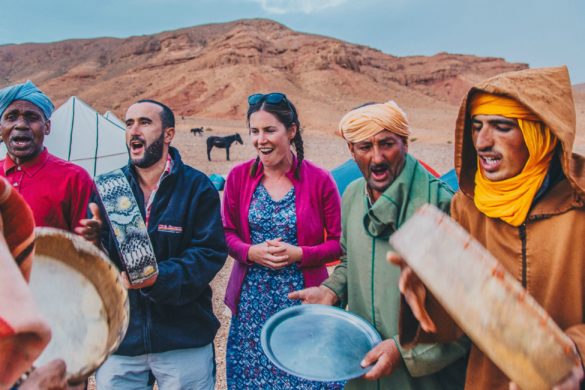 Want to hike through Morocco with a Berber family? You will once you see these photos 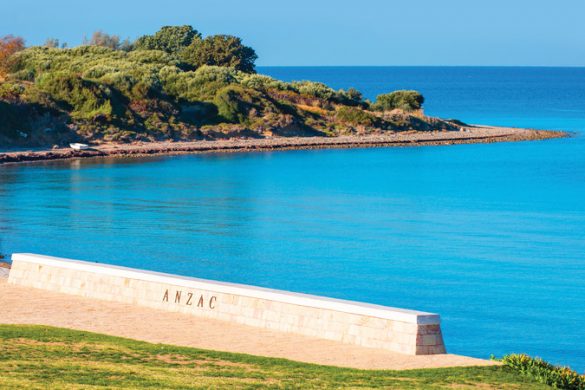 What visiting Gallipoli meant to me, a young Aussie traveller

I would say thanks to you for this helpful and informative article. I am also going to Iceland with my family. This tips will really helpful for me on this trip. The waterfalls images you posted looking very beautiful…