Home » 5 experiences in Asia worth getting up early for
Guides

5 experiences in Asia worth getting up early for 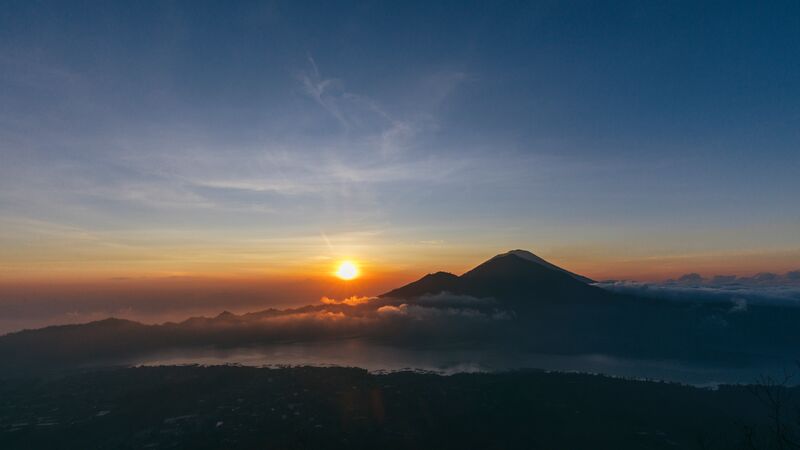 Travel is great and all, but wouldn’t you agree that bed is also one of the best places on earth? That’s why I often try to adopt a ‘no alarm’ policy while travelling – it’s one of those little luxuries that helps me to chill out and feel like I’m actually on holiday.

But there are definitely experiences that require a pre-sunrise alarm and some cold water splashed on your face, and they’re totally worth it.

Set your alarm: 2am 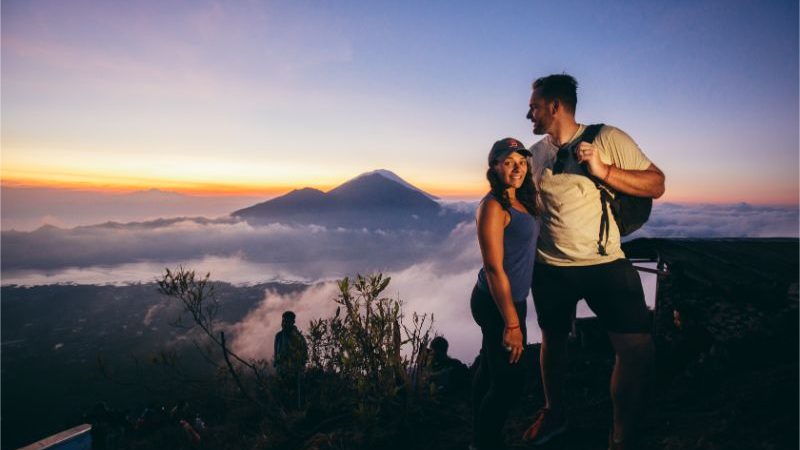 If you ever find yourself being offered a banana crepe and a black coffee at 3am somewhere in the Kintamani hills of Bali, I suggest you say yes. It takes two to three hours to hike to the top, so it’s not as demanding as neighbouring Mount Agung, but when you find yourself climbing in the pitch black with only a small torch, you’ll be thankful for any extra fuel you were able to get beforehand.

You’ll need to have a good base level of cardio fitness and be OK with heights to do this hike. Case in point: a few people in our group chose to stay at the first lookout point rather than continue all the way to the top as they were too puffed. Once we’d made it up, our guide found us a good spot with a clear view of Mount Agung and helped set our phones to time lapse mode (she knew all the tricks). I wasn’t dressed warmly enough (‘But it’s summer!’ I’d naively thought) so I hired a blanket for a few Rupiah which, paired with a hot cup of coffee, was a very cosy little setup, all at over 1700 metres above sea level.

RELATED: HIKING BALI’S MOUNT BATUR: EVERYTHING YOU NEED TO KNOW

This alone would have been novelty enough, until the sun started to rise. I’m not sure if I’ve ever witnessed something so beautiful. Coupled with my sense of accomplishment at climbing to the top of a volcano, the excited buzz of my fellow early-risers on the summit, and the invigorating mountain air, it has to be one of my most memorable moments in 15 years of travel.

Once the sun’s up, you’ll get the chance to explore, take in the breathtaking views, and meet the monkeys that call this spectacular place home.

TAKE A SUNRISE HIKE ON ONE OF THESE SMALL GROUP ADVENTURES:

Set your alarm: 5am 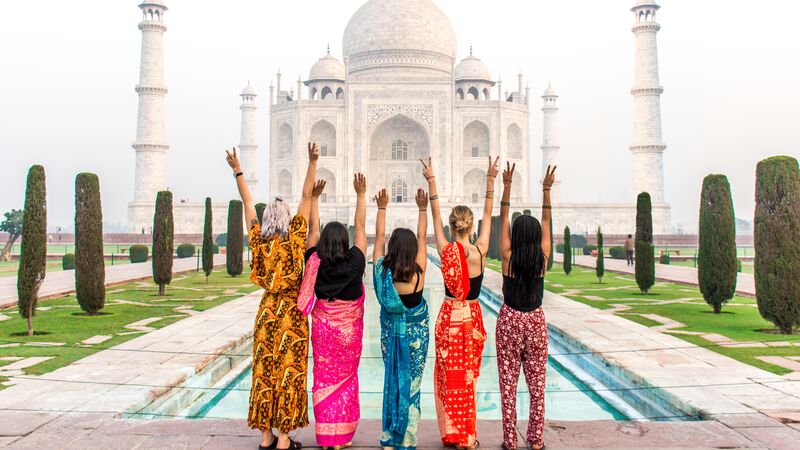 There are some places in the world that really have to be seen to be believed; sites that literally take your breath away, and are absolutely worth battling the crowds for. The Taj Mahal is one of them. Standing majestically in the distance, twinkling in the early morning sun, it was hard not to let out a small squeal of excitement as I glimpsed it for the first time.

The best time to visit is early morning, to beat the crowds and intense heat that can set in as early as 9am during summer. The ticket counter opens at 6am, so aim to get there by 5.30am (there will probably already be a small-ish queue of keen beans).

RELATED: VISITING THE TAJ MAHAL: EVERYTHING YOU NEED TO KNOW

To make your entry even quicker, leave your bag in the coach (or back at your accommodation) so you can avoid the bag-check queue. Ticket entry includes a bottle of water and shoe coverings (which you’ll have to pop on when you’re closer to the monument) so, apart from your camera or phone, you don’t really need much else. Any other food or drink items will be confiscated at the gate. Also, be prepared to get split up from your travel companion(s) of the opposite gender, as there are separate queues for men and women.

Once you’re in, it’s a good idea to get as many shots out of the way while there are fewer people – which may or may not include the cheesy but mandatory ‘pinching the roof’ shot. Then you can relax and really pay attention to your guide, taking in all the history and beautiful details of the buildings.

VISIT AGRA’S INCREDIBLE TAJ MAHAL ON ONE OF THESE SMALL GROUP ADVENTURES: 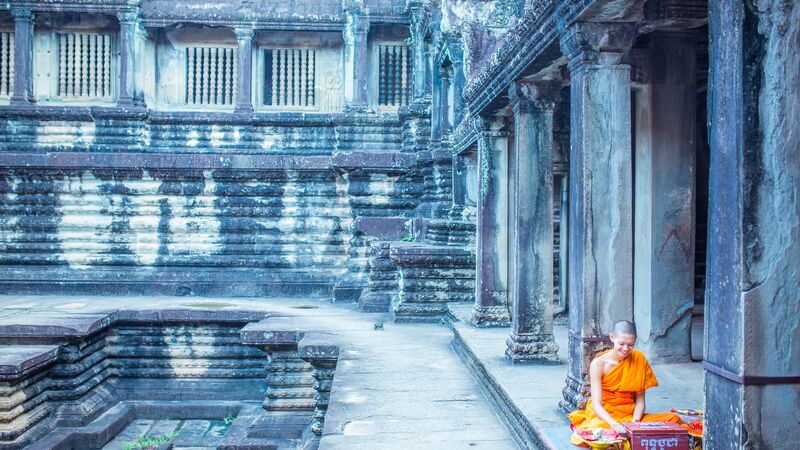 Built between the ninth and 13th centuries, the UNESCO World Heritage site of Angkor Wat has so many temples over a vast area that it would take you weeks to explore them all.

Because of its sheer size, the amount of tourists who visit every day, and the scorching temperatures for a large chunk of the year, it’s recommended you visit in the early morning. This way you can experience a dreamy sunrise and do some temple exploring before it gets too hot, then come back later in the day to see more before it closes (or come back the next morning, if you have a multiple-day pass).

RELATED: VISITING ANGKOR WAT? HERE’S EVERYTHING YOU NEED TO KNOW

After picking up tickets from the tourist office you’ll drive a little further, then get out to walk for around 10 to 15 minutes before arriving at the sweet spot – a pond in front of the Angkor Wat. Crowds will gather quickly to hustle for a good spot, so if you get a place near the water’s edge, try to stand your ground! Then it’s a waiting game as the sun starts to peek out from behind the temple. On a good day, the brilliant rose hues create mesmerising reflections on the water.

If you’ve got limited time, the other must-sees are the ‘Tomb Raider temple’ or Ta Prohm, with its crumbling ruins wrapped in enormous tree roots – no wonder it was the perfect setting for the 2001 film. The next priority is Bayon, otherwise known as the ‘face temple’, due to its stone towers decorated with hundreds of huge smiling faces of Avalokiteshvara, a type of Buddha believed to protect against fire, shipwreck and other disasters.

CATCH AN EPIC SUNRISE AT ANGKOR WAT ON ONE OF THESE SMALL GROUP ADVENTURES: 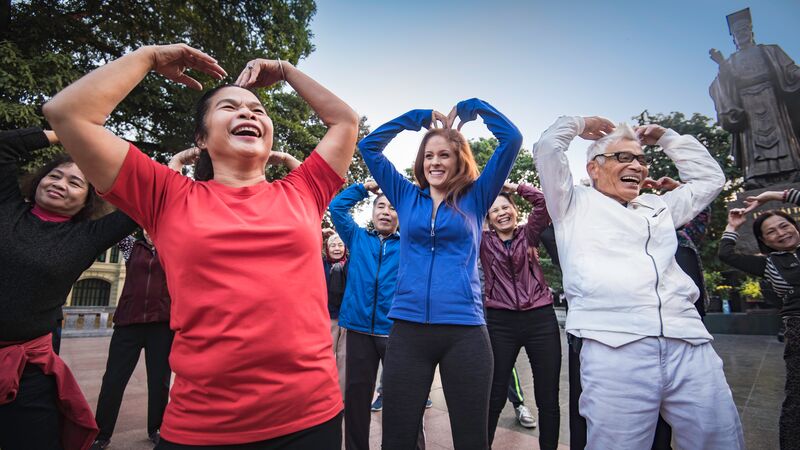 Hanoi locals are morning people. And one of the best ways to see them in their element is to go for a walk or bike ride around the lakes.

Start at Hoen Kiem Lake in the Old Quarter, which only takes around 30 minutes to walk around. Admire the Huc bridge, a picturesque bright red bridge that leads to a small but beautiful temple called Den Ngoc Son. Other highlights around the lake include an imposing statue of King Ly Thai To, who founded Hanoi, and a pavilion on a small island in the middle of the lake, called ‘Tortoise Tower’. While the lake is also very popular at night – pretty lights illuminate the bridge and temples – the morning is a fabulous time for people watching. In particular, Hoen Kiem lake attracts lots of locals doing their morning Tai Chi with grace and precision, working up a sweat with Zumba and ballroom dancing sessions, or starting their day with an hour of laughing yoga.

RELATED: A DAY IN HANOI, VIETNAM: YOUR GO-TO GUIDE

Around a 40-minute walk from here (or a 20-minute bike ride) you’ll reach the south-eastern edge of West Lake, another lovely spot for a morning walk, jog or bike ride, and to see the locals out and about. On the morning I went, I saw people doing their morning exercises (some involving quite creative dance moves), plenty of small groups sitting around drinking tea and chatting, street vendors selling snacks and sweets, and groups of men selling military paraphernalia and motorbike parts.

A highlight of West Lake is Tran Quoc Pagoda, the oldest Buddhist temple in Hanoi. Built in the sixth century, it has 11 levels with Buddhas sitting in each archway. You’ll notice incense burning around the pagoda and the surrounding buildings; it’s an active place of worship for locals, and the atmosphere is heavy with this meaning and importance. It opens at 7.30am and is free to enter.

JOIN THE LOCALS IN SOME MORNING ZUMBA ON ONE OF THESE SMALL GROUP ADVENTURES:

Set your alarm: 6am 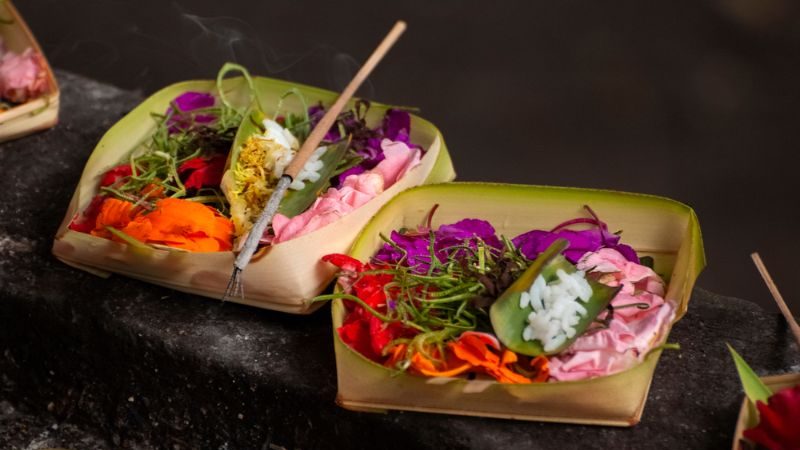 Walking around Ubud is like a special kind of dance. You’ll find yourself constantly hopping and skirting around things to keep your footing. Forget daydreaming into the distance; here, you’ll need to stay focussed as you navigate your way past dogs, very cheeky monkeys (if you’re down near the forest), uneven paving work, and little square baskets filled with colourful things.

You’ll notice these little square baskets everywhere – on the ground outside shops, in the doorways of homes and temples, on statues and perched on ledges. They’re called Canang Sari, and they’re an important part of everyday life for Balinese Hindus, designed as an offering to the gods to show gratitude and satiate evil spirits. Made from woven banana leaves, they’re filled with different-coloured flowers, each representing a different Hindu god. They’re topped with an incense stick and edible items such as rice and biscuits. Sometimes money and cigarettes are included too.

RELATED: 8 MUST-DOS IN UBUD, THE CULTURAL HEART OF BALI

The early hours of the morning are the best time to see the local women out and about in their beautiful traditional clothing, lighting incense and placing these offerings around the streets. If you see them carrying large, colourful baskets on their head, these are filled with Canang Sari ready to lay out. For me, it’s one of the most magical times of day in Ubud; a chance to appreciate the calm atmosphere before the rest of the town wakes up.

WATCH UBUD WAKE UP ON ONE OF THESE SMALL GROUP ADVENTURES: 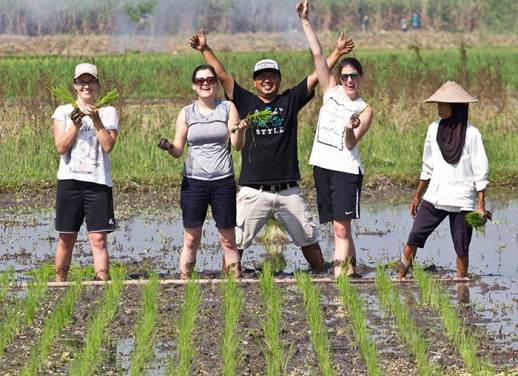 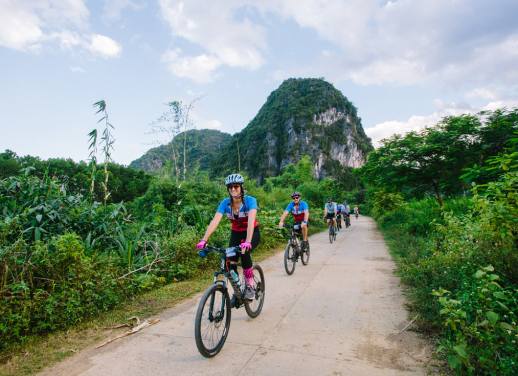 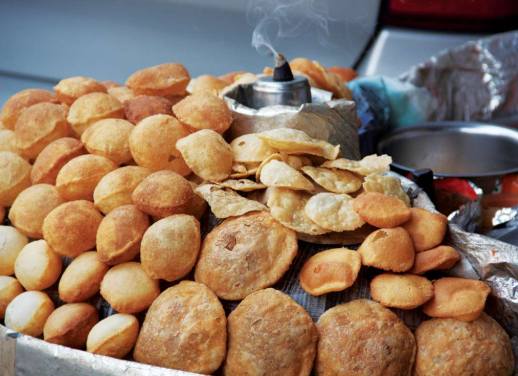 nice your article. thanks for sharing

Mount Batur, Bali. one of the best places to see the sunrise. I want to be there immediately.
thank you for recommending this place