Home » Go with the Flo: Intrepid leader Florence talks what to expect on an East African safari
Videos 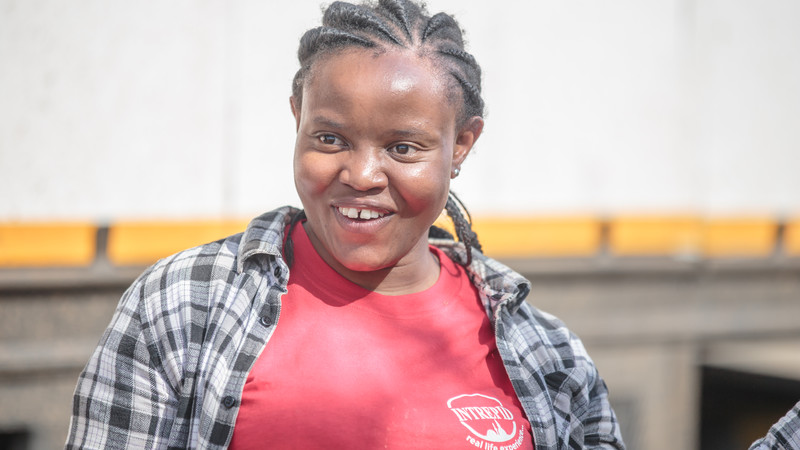 Florence is one of those people you just want to be around. She’s radiant, she’s funny and she’s got mean hyena-spotting skills. Seriously, the woman can spot a grass-coloured animal standing still in some grass a hundred metres away, and then some. She’s also a competitive tent-pitcher (by george she’s fast) and knows some pretty insane animal facts (did you know giraffes’ necks are so heavy, they’d pass out when drinking if it weren’t for a valve release mechanism? Nature is genius).

So yeah, you might be able to tell Florence has no ordinary day job.

Hailing from the Southern Rift Valley in Kenya, Florence – or Flo, as she’s know to many – has been leading small group Intrepid trips through Kenya and Tanzania for a few years now. A typical day at the office can involve anything from fixing a bust truck tire in the Serengeti to sitting around the campfire with Maasai warriors and a motley crew of travellers from all over the world. It’s not a common thing for a woman to be a tour leader in Africa, but Florence loves her job, and says she’s keen to motivate other girls back in her village to dream big about their futures.

MEET SOME OF INTREPID’S OTHER FEMALE LEADERS AROUND THE WORLD

So what’s it like to travel through East Africa on a small group safari? Let’s let Florence do the talking:

Make your own memories in Kenya and/or Tanzania on an Intrepid small group adventure.

Ever wondered what an Intrepid sailing trip looks...

We travelled with Intrepid and Florence was our amazing guide. Loved every second of this fantastic trip. The people, animals, countryside, villages, tenting, etc . A truly exceptional experience.

So great to hear! Thank you very much for sharing, Brenda!

I travelled with Florence there with intrepid, she was brilliant! From spotting wildlife to bartering ,cooking and sorting transport difficulties. Fantastic!