Home » 7 must-visit destinations in Egypt (that aren’t the pyramids!)
Features

7 must-visit destinations in Egypt (that aren’t the pyramids!) 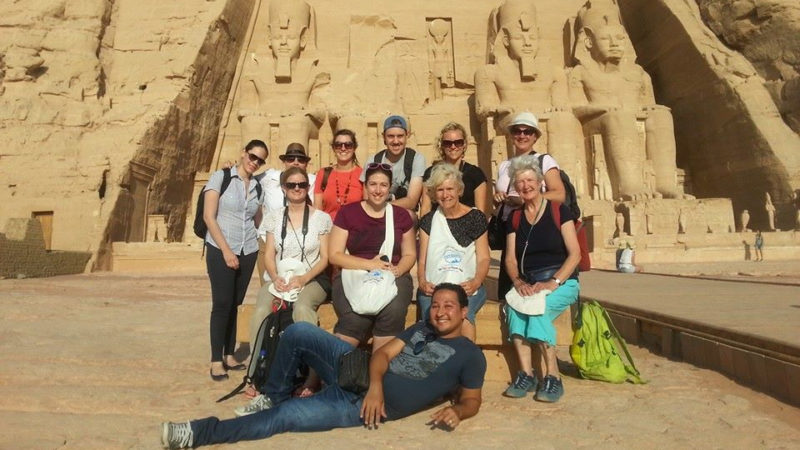 When most people start planning a trip to Egypt, they immediately picture themselves standing in front of the Great Pyramids of Giza; and rightfully so, they are a wonder of the world!

I certainly wasn’t familiar with many other destinations within Egypt before I took the leap to travel on a group tour. Admittedly, I didn’t do much research prior to my trip since I knew Intrepid would handle all the logistics, but once I started exploring all the interesting places around Egypt, I was hooked. This is a country with such a long and storied past that it would be hard not to fall in love with it!

With its dedication to historical preservation, Egypt is full of even more museums and ancient temples than you might think. (And, tip: most of the sites on the list below are also included on Intrepid Travel itineraries in Egypt if you feel more comfortable traveling this region of the world in a group like I did.) 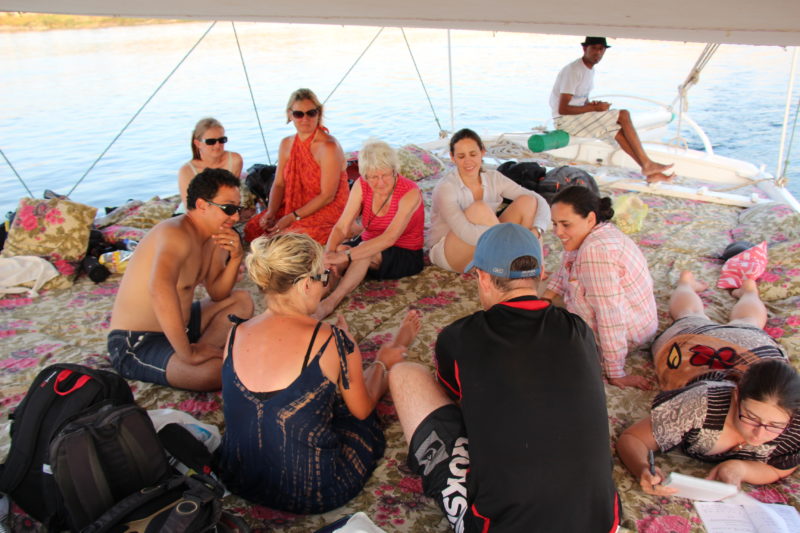 My Intrepid group riding a felucca on the Nile

Here are seven recommended places to visit in Egypt besides the pyramids:

Built in 2002, the new Alexandria Library pays homage to its famous ancient counterpart because every aspect of the modern building has a story behind it. The exterior design of the building is meant to look like the sun rising from the sea just as the ancient people depicted it. On the outer wall, there are carvings of letters from every known language in the world, just as the old ancient library was rumored to have texts from every written language in the world.

Once inside the library it is a destination in itself thanks to its four museums, a digital exploration area, a children’s library, a teenager library, a gift shop and open air atrium. Plan to dedicate at least a few hours wandering through the stacks and exploring the sights within the library. 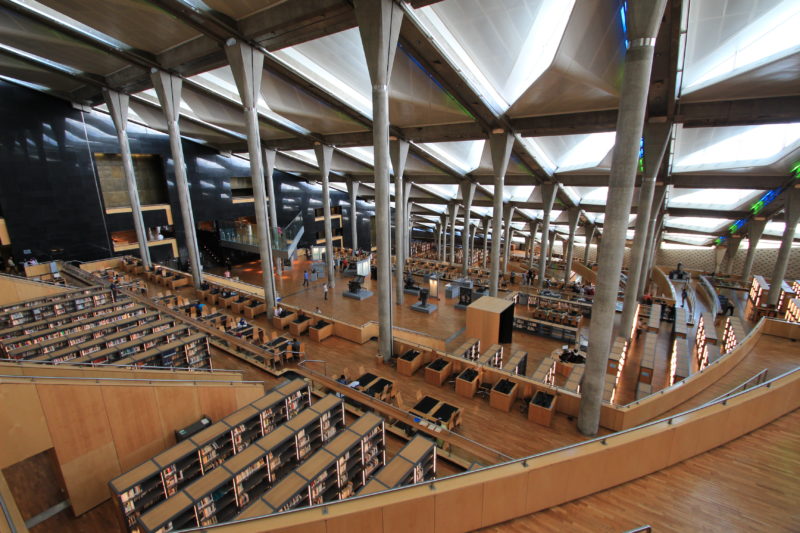 VISIT THESE INCREDIBLE SITES ON ONE OF INTREPID’S EGYPT TRIPS

Perhaps my favorite historical site on this list, Abu Simbel is located in a remote part of Egypt, near the Sudan border. Many travelers are intimidated by this location, deeming it unsafe to visit. However, Egypt really is dedicated to protecting visitors, and I felt completely comfortable visiting there.

At Abu Simbel there are two temples—one for Rames II and one for Queen Nefratiti—both of which are included in your entrance fee. The facade of this first temple features four massive statues of the pharaoh, but the inside might be even more impressive. You will be greeted with one of the most complicated hieroglyphic drawings in all of Egypt with over 100,000 characters in a single scene! If you’re anything like me, I was absolutely obsessed with King Tut as a child after seeing a traveling exhibit about Tutankhamun on one of my elementary school field trips. As I walked into the Tutankhamun exhibit at the Egyptian Museum in Cairo, I was filled with that same sense of wonder as I gazed at Tut’s gilded burial mask and countless colorful relics from his tomb.

This exhibit alone makes a visit to the Egyptian Museum a must-do activity while in Cairo, but it is filled with more than 120,000 other amazing relics, including the largest royal mummy collection in the world. This extra exhibit is well worth the slightly higher admission price to see!

READ MORE: WHY YOU SHOULD FORGET THE HEADLINES AND VISIT EGYPT NOW 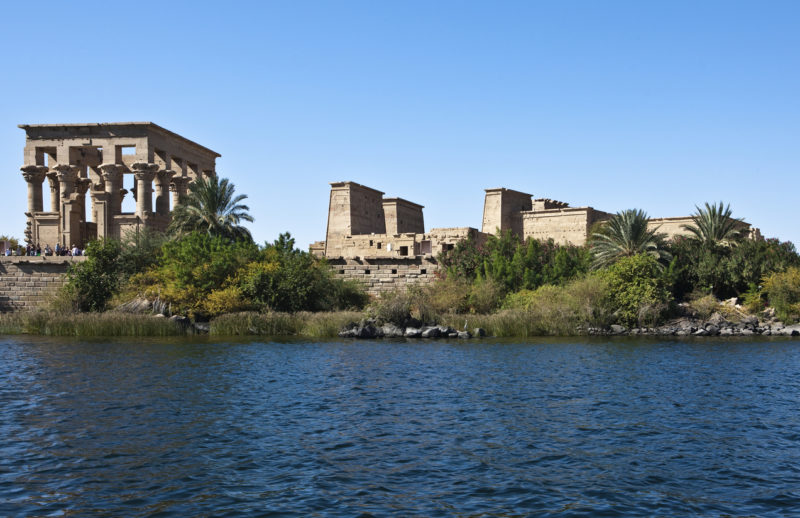 One of the most unique temples on this list, Philae temple near Aswan is only accessible by boat as it sits on an island in the middle of the Nile. How did it get there, you might ask? In the 1960s, the Egyptian government built several large dams that threatened ancient ruins along the Nile. Understanding the value of its history, the government commissioned archaeologists to move the sites, one of which was Philae Temple.

The temple was disassembled (into 75,000 pieces nonetheless!) moved and then re-assembled in a new location safe from dam overflow. When you look at the temple’s intricate design up close, you get a true appreciation for both the work it took to build originally and also the more modern work of moving it.

READ MORE: WHY A GROUP TOUR IN EGYPT AND JORDAN WAS THE RIGHT DECISION FOR ME

For all the feminist readers out there, the temple of Hatshepsut is the Egyptian temple for you! Dedicated to the second historically-confirmed pharoah in Egyptian history, Hatshepsut was known for her strong personality and for being the longest reigning female pharoah. She helped design her own temple with its iconic, perfectly-stacked tiers. Once inside the temple in Luxor, the walls are full of incredibly colorful hieroglyphic paintings telling stories about her, the pharaohs and the gods. 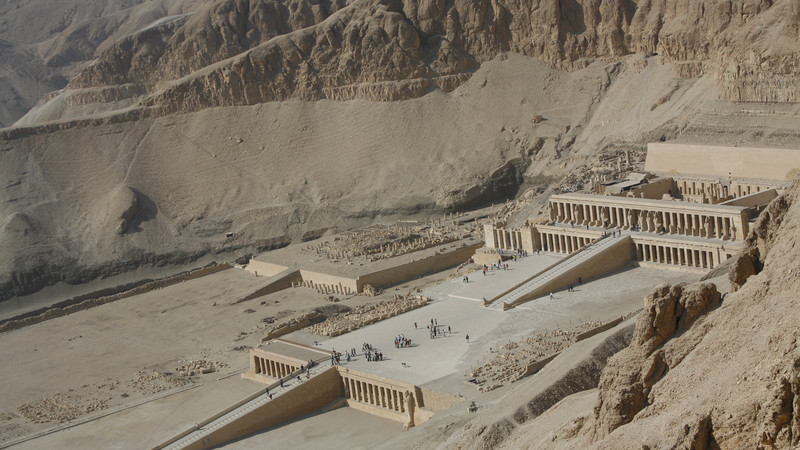 Valley of the Kings

One of the most well-known sites in Egypt, Luxor’s Valley of the Kings was the main burial grounds for the pharaohs from 1500BC to 1200BC. There are 60 discovered tombs here and they’re some of the best remaining examples of painted hieroglyphics. In the tombs you will see painted scenes of the journey into the afterlife on every wall and even the ceiling—truly a sight to see!

The tombs are built into the mountainous landscape, so you will be spending most of your time here in the hot Egyptian sun. Remember to wear a hat, pack water and apply sunscreen before your visit as it takes several hours to explore the whole area.

Karnak Temple is the largest of all the ruins discovered in Egypt and the second largest ancient religious site in the world (only smaller than Cambodia’s Angkor Wat). This temple took approximately 2,000 years to fully construct and with each new pharaoh came new design elements, making for a fascinating walk through the minds of Egypt’s most elite royalty.

You’ll spot a style mish-mash of gates, colonnades and even an obelisk as you wander the several kilometers around the site. Unlike many other temples in Egypt, Karnak temple sits in its original location on the banks of the Nile, in Luxor.

Ready to explore all these Egyptian wonders, and more? Check out Intrepid’s range of small group tours in Egypt. 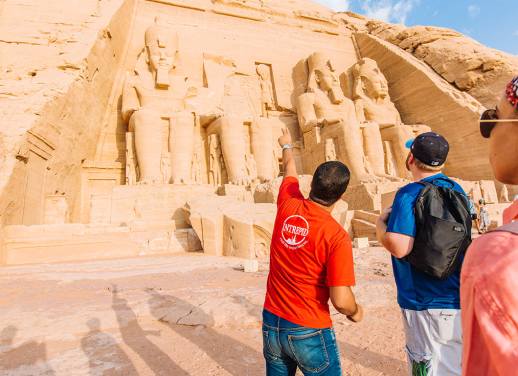 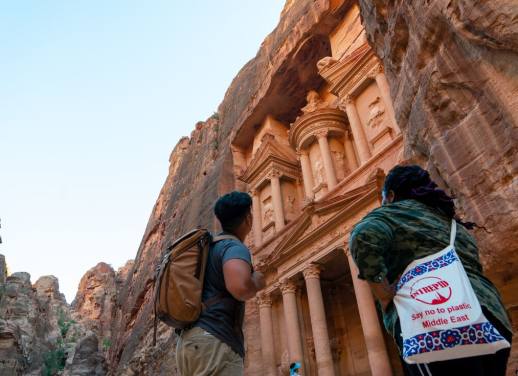 Went to Egypt recently and loved it. My favourite were Abu Simbel and Karnak Temple.

To reiterate what Megan said re Abu Simbel, Egypt puts a huge priority on protecting tourist attractions, and security is very visible. The nation’s economy is largely dependent on tourists, and therefore on their safety.

Abu Simbel is a must. Aswan–meh. Egyptian Museum is a must, including the extra fee for the mummy room (Ramses II is one of my 3 favorite corpses that I’ve seen). Valley of the Kings is a must, including the descent into Tut’s tomb. Karnak is probably the best temple in Egypt. I also went to Horus (Edfu), Kom Ombo and Luxor, which are less scenic but still worth stopping at if you’re doing a Nile cruise.

When I toured Egypt in 2000, we visited all of those sites except for the Library at Alexandria. Plus the pyramids! We got to go into the Great Pyramid twice, even. We also saw the Temple at Dendara (Hathor), Temple of Man at Luxor, and more. It was magical!