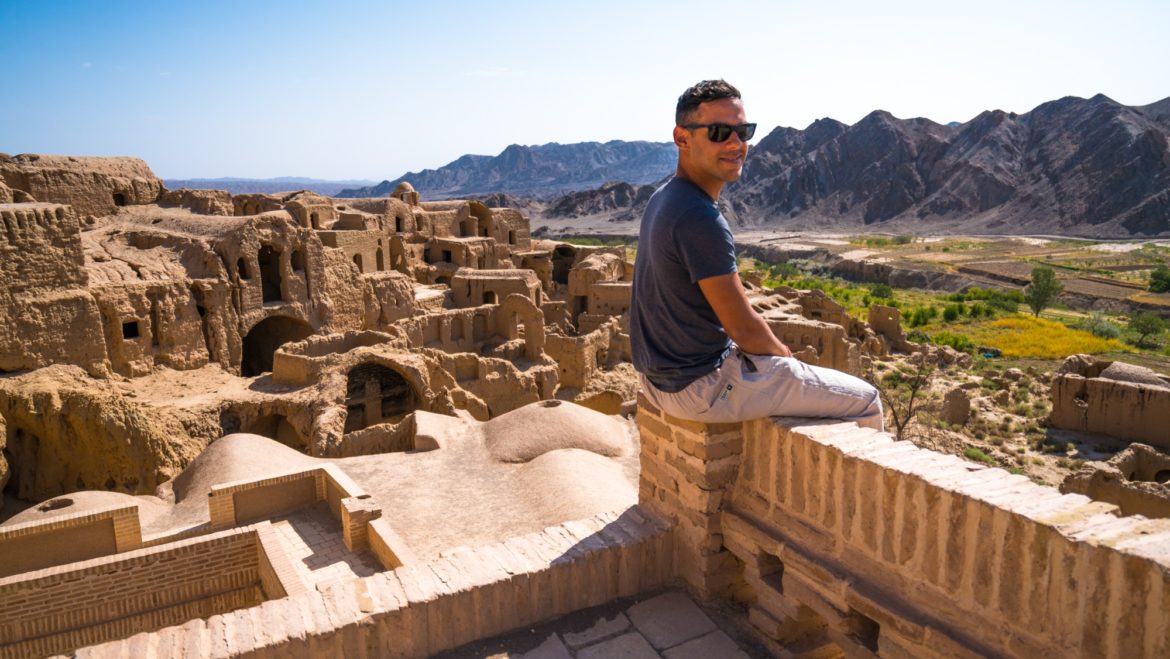 Packed with over 5,000 years of history, Iran is a destination everyone must experience at least once in their lifetime. From the ancient Persian Empire to the Zoroastrians temples, the countless mosques, and even the modern cities like Tehran, there is so much to see that one visit will not be enough.

After traveling to Iran on Intrepid Travel’s 14-day Iran Adventure trip, I shared my experience with many of my friends. Most of them replied with a similar response, “I’d love to go to Iran!”

This is a common response among travelers, yet not many actually plan a trip to the country due to misinformation, lack of information, or fear. 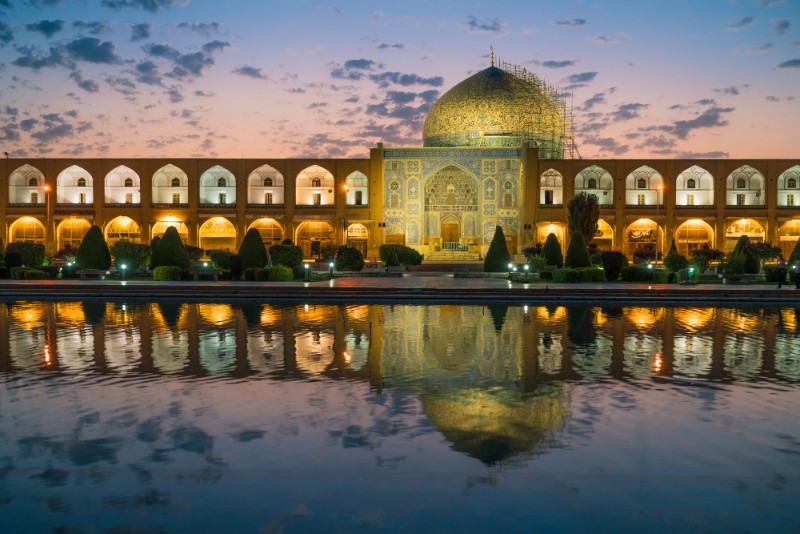 To encourage you to plan a trip to this wonderful destination, I’ll share with you a few reasons why you should travel to Iran as an American, debunk a few myths, and tell you what to expect there.

No, they don’t hate Americans

Contrary to what you see in the media, Iran is one of the friendliest and culturally-rich countries you’ll ever visit. And no, they do not hate Americans or any other Western nation. That’s just fear-mongering and it is far from reality.

When I arrived, I debated how open I wanted to be about my nationality. But as soon as I met Nadia, our Intrepid Travel guide, she put to rest any mild concerns I had about sharing openly that I’m American. No one has an issue with it. 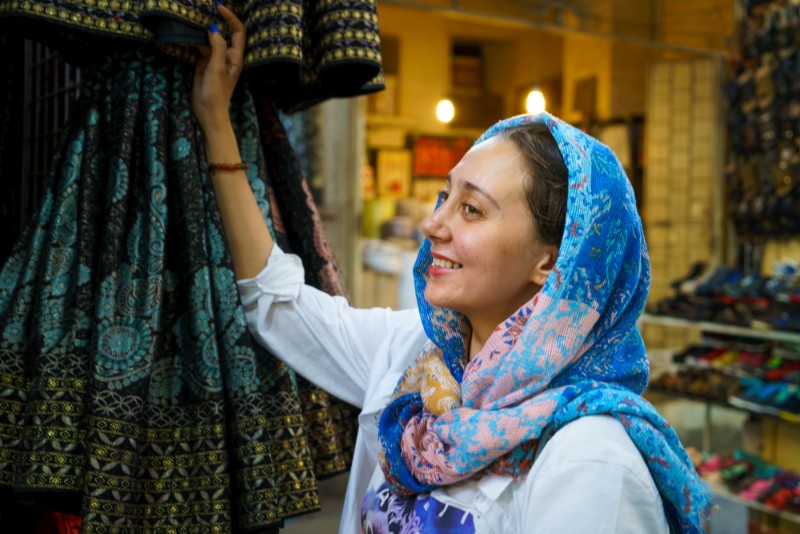 MEET NADIA, THE INTREPID LEADER WHO WILL CHALLENGE YOUR PRECONCEIVED NOTIONS ABOUT IRAN

As we traveled the country, countless locals approached me and my other tour companions to chat with us. They were all curious to know about us, our life in our respective countries, and how we were enjoying Iran. On our part, we were just as curious to learn about them, so we fed each other’s curiosities over tea and casual chatting.

One of my favorite random encounters happened just before leaving Iran. I spent my last few hours in the country visiting the Azadi Tower, where I met a few early 20-something local guys. As soon as one of them learned I was American, he expressed with joy how much he’d love to visit the US and shared his vast knowledge of the country. In fact, he was wearing an American flag bandana.

Everywhere you go, you always feel that warm welcome Iranians are known for. 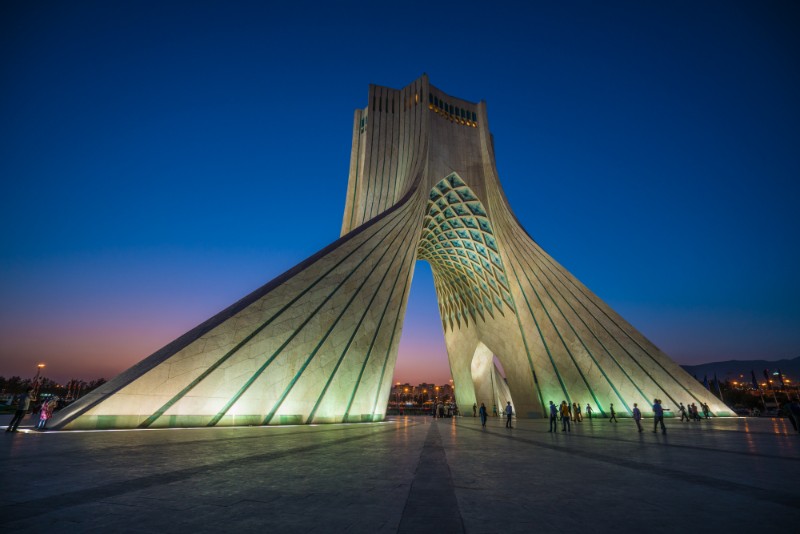 The visa process is extensive, but worth it in the end

Yes, the visa process is more complicated than in many other countries, but it should not be a deterrent to visiting Iran. Due to the current political environment, Americans are having a tougher time to get their tourist visas approved, but still, it is possible to get them. Thankfully, Intrepid Travel helps you get your visa by guiding you every step of the way with their visa application form.

HERE’S EVERYTHING YOU NEED TO KNOW ABOUT THE VISA SITUATION

Once you get the visa, set foot in the country, and experience everything it has to offer, you’ll see that that the extra process was all worth it.

There’s so much history to be learned and experienced

As the host to one of the oldest civilizations in history, Iran has no lack of ancient ruins and historical sites. Everywhere you go, you’ll be surrounded in hundreds, if not thousands of years of history. 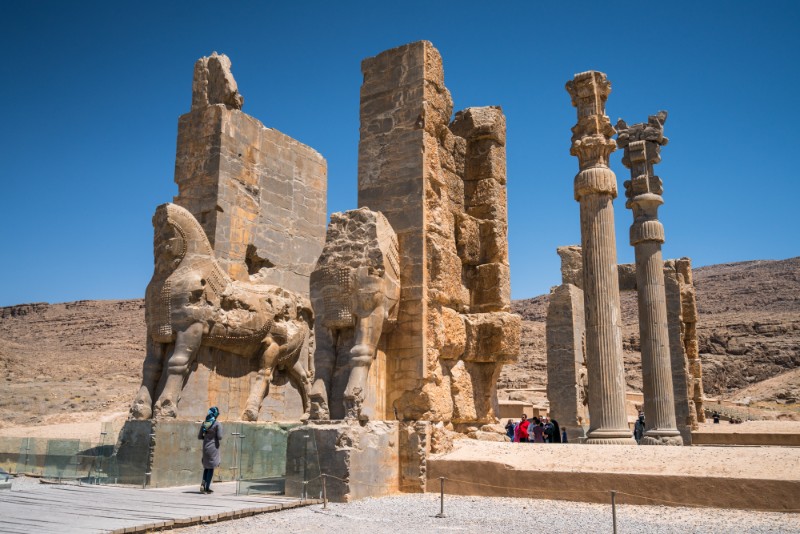 Gate of All Nations in Persepolis

From the Elamite Kingdoms, to the Persian Empire, Alexander the Great’s conquest, the Arab invasion, and even the 1979 revolution, each city you visit will show you a piece of the historical puzzle and how they played a part in the development of Iran as we know it, its neighboring countries, and even the rest of the world.

One of my favorite experiences on this trip was spending a night at the Zein-o-din Caravanserai. A caravanserai is an ancient fortress-like facility used by merchants traveling along the silk road around 450 years ago. They would spend the night there to rest, feed their camels, and trade goods before continuing their journey. Today, this one caravanserai is open for us to spend the night right where merchants used to sleep.

I think some of the best travel destinations are the ones that teach you something new through experiences, and Iran has no shortage of that. The level of culture shock in the country is significant, but in a positive way. You’ll see how, despite their current economic and political status, Iranians still welcome you with a smile and the warmest hospitality you could hope for. 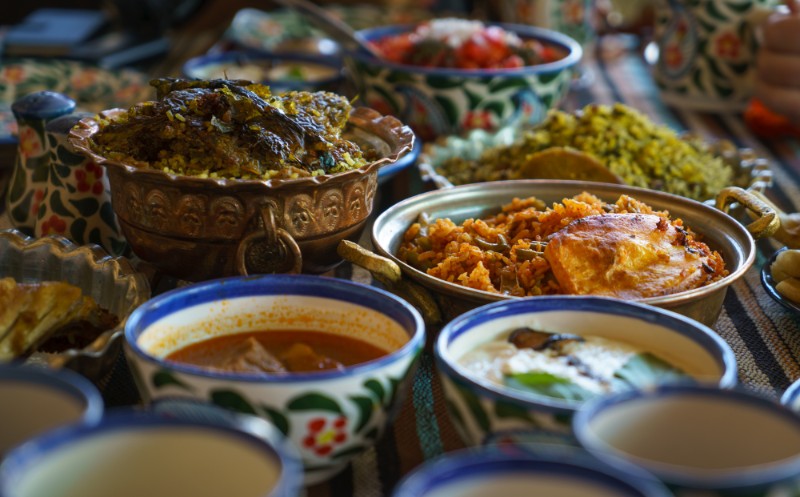 You’ll be welcomed with an abundance of food, too!

You’ll see how women are proud of their trendy fashion, how their carpet artistry is among the finest in the world, how the nomadic culture is still alive, how their local markets are the center of activity, and how families gather at parks and squares to picnic at night until well past midnight (it can get too hot to picnic during the day).

You’ll also see how religion is deeply tied to their society and the many intricate details that make their culture unique. You’ll see all kinds of people, from the most conservative to the most liberal, and the beauty of all of them coexisting in one place.

It’s good to be ambassadors of our country

As I mentioned previously, locals will talk to you and ask you about life in the US or your country. This is our opportunity to show them who we really are not only as a Western nation but also as humans. There is no better way to learn about a country than by talking firsthand with locals, the people who live and breathe their country every day. They will share with you their proudest moments, their struggles, and their desires. 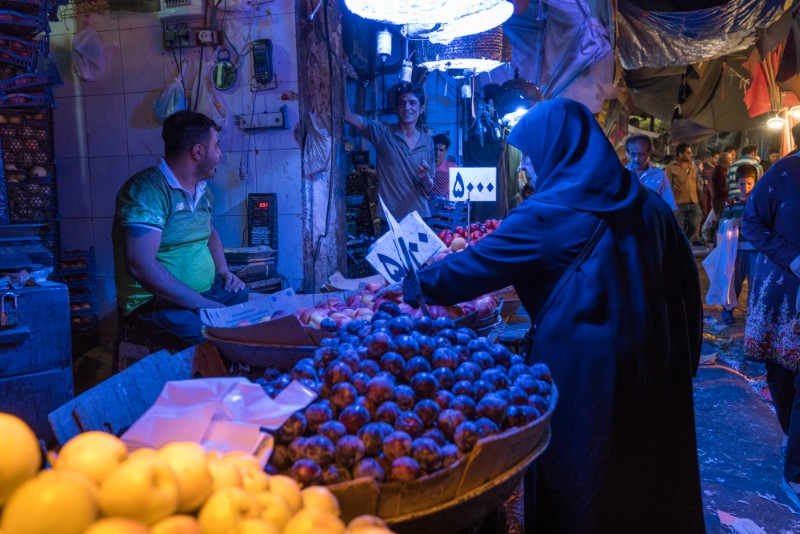 Locals in the vegetable market in Shiraz

Another fear-mongering myth is that Iran is not safe. But again, it is the opposite. Locals aren’t looking to harm, kidnap, or threaten Americans. I never felt in danger, not even when I walked on my own in the city of Esfahan past midnight.

Traveling solo is safe, but as Americans, you will be traveling on a tour (since it is required), so that’s even another safety layer.

TRAVEL STORY: “I’VE CYCLED THROUGH OVER 40 COUNTRIES; HERE’S WHY IRAN STANDS OUT”

There’s no alcohol, pork, and no American/Western chains

For good or for bad, alcohol has been banned in the country since the revolution in 1979. Pork isn’t found either, but this is more because of Islamic customs. American and Western chains are not found in the country due to economic sanctions and the complicated political relationship Iran has had with the Western world for decades now. 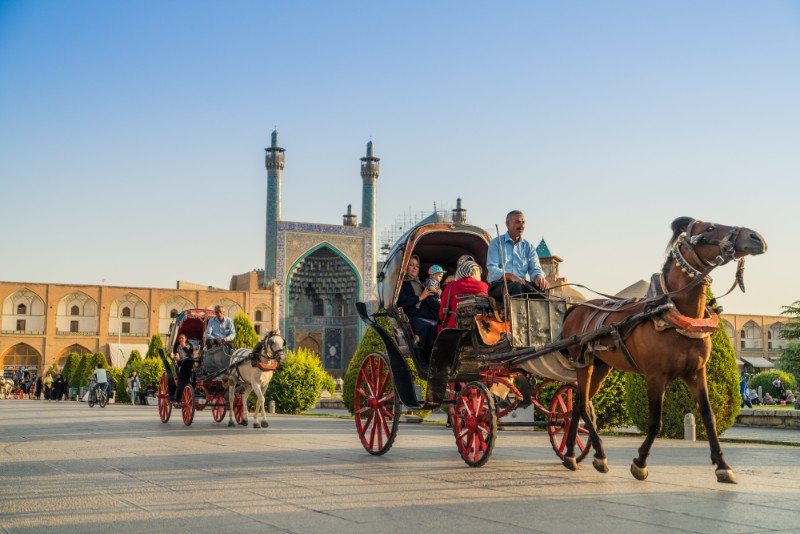 Esfahan – one of Iran’s many unique and compelling destinations

What you will find, though, are knock-off versions of popular fast foods like McFood, a different KFC, Burger Queen, and so on. It’s fun to see how they reinterpret and adopt the Western culture not only on their food but also on their fashion and entertainment too.

There is so much more to be discovered and experienced in Iran and no post will compare to the beauty of seeing it all firsthand. If you are as intrigued by the country as I was before I went there, I’ll tell you, it will impress you and possibly even surpass your expectations. At least, it surpassed mine.

Ready to visit this incredible destination for yourself? Check out Intrepid’s small group tours in Iran.

(All images courtesy of the writer, Norbert, and taken on Intrepid Travel’s Iran Adventure trip.) 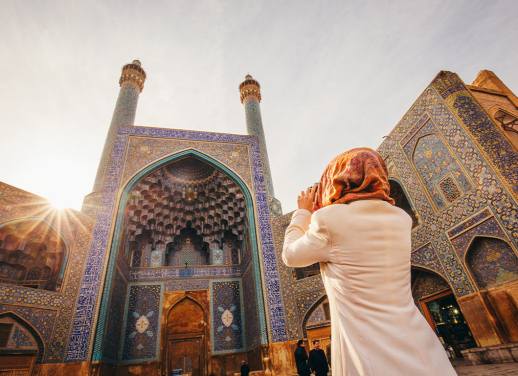 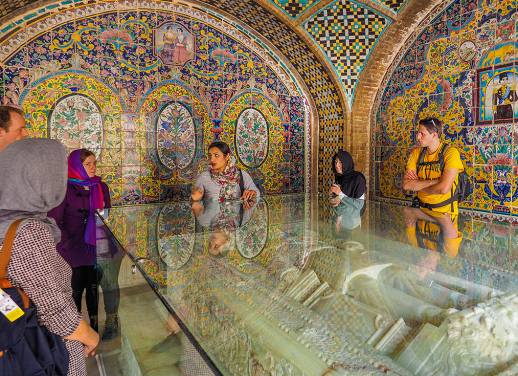 Norbert Figueroa is an architect from Puerto Rico who hit pause on his career in 2011 to travel the world long-term. So far he’s traveled to over 125 countries in hopes of achieving his goal of visiting all 195 UN-recognized countries. You can follow his adventures at globotreks.com and on Facebook and Instagram @globotreks.

Iran wasn’t this repressive before 1979. Women wore mini skirts and there were dozens of night clubs back in the days, where French movie stars and famous performers would hang out. Everything changed after the bloody 1979 revolution.

Also, alcohol has been part of Iranian culture for thousands of years and Iranians have been making wine before the grapevine was introduced to Europe. It was part of Zoroastrian culture actually, to bottle wine when children were born. Today, Iranians not only drink excessively but they brew their own vodkas and spirits. The Islamic regime cannot kill traditions.

Secondly you speak of the “Arab invasion” but fail to speak about the Mongol invasion, which was far more devastating to Iran than any other event in the nation’s history. By the way, Iranians are not Arabs. This needs to be repeated. Iranians are not Arabs and their culture and language are completely different than Arabs. Why it needs to be repeated? Because of how Hollywood and American news media in particular, have been portraying Iranians as something which they are not.
Persian is actually closer to English than it is to Arabic.
And Nomadic life is alive in SOME parts of Iran, and definitely not everywhere. In the most populous provinces in Iran, Mazandaran and Guilan (which you obviously haven’t visited), people are sedentary and have been sedentary for at least 5000 years.

It’s very important to distinguish the people of Iran from their regime/government who have been ruthlessly dictating their lives since 1979.

It seems that you’ve seen some parts of Iran well , hope see you here again and visit the rest of country except historical cities and Tehran m, Iran has so many things to do that you should explore them with natives☺️

It’s not about the Persain people hating Americans, we know Iranians are some of the friendliest people. It’s about the oppresive and violent Iranian Regime. People get gunned down in the streets by the government just for protesting. I would love to go to Iran, but my American passport makes it unsafe, even Iranians are not safe from Iranian government. No country without an that does have an embassy of your nationality is safe to visit. You yourself said it is mandatory to be with a tour, did you wonder why that is? While I think it is misguided for you to advise Americans to travel to Iran(at least in today’s political climate), I’m glad you got to experience it and get back safely.

Keep in mind that this article was published before Trump’s stupid actions.

I am from Iran. Let’s visit the historical sites of Kashan. We do not hate the American people. We hate the US authorities because of the sanctions.we love our leader. we love our revolution.

I’m happy to read the report. I hope more americans visit Iran:)
I bet if iranian know english language they will express their warmness better and more, especially in villages

Nice post! Did US immigration give you hard time when you came back to the states?

Really cool article. I have a good friend that lives in Iran and I would love to visit one day. I see on the US Dept. of State website that Iran is at a level 4 (do not travel). It mentions arbitrary arrest and detention of US citizens. What do you think about this? Do you believe that this is part of the fear campaign or do you think this might be the case if a US citizen was to travel without the mandated group?