Andalucia is a feast for your eyes (and tastebuds).

Marvel at the sights, sounds and smells of Andalucian country on this eight-day exploration of Spain’s south. Feast on a variety of region-specific tapas, explore historic hilltop cities and bask in the laidback and friendly atmosphere. Your highlights tour includes all the good parts of Seville, Ronda and Granada, plus ensuring you have time to explore each destination at your own pace. Whether you are after a scenic hiking opportunity, or simply time to sit back and relax with a coffee or glass of wine, Andalucia has got everyone covered. You’ll soon realise why this Spanish region is known as one of the most beautiful. 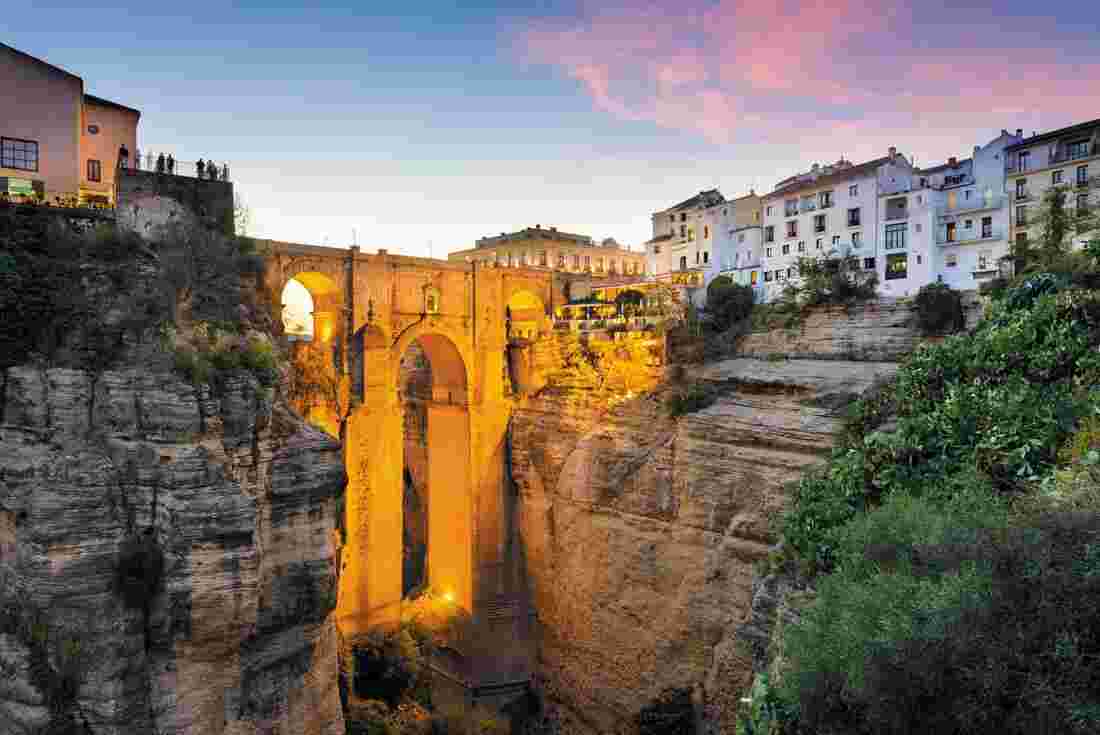 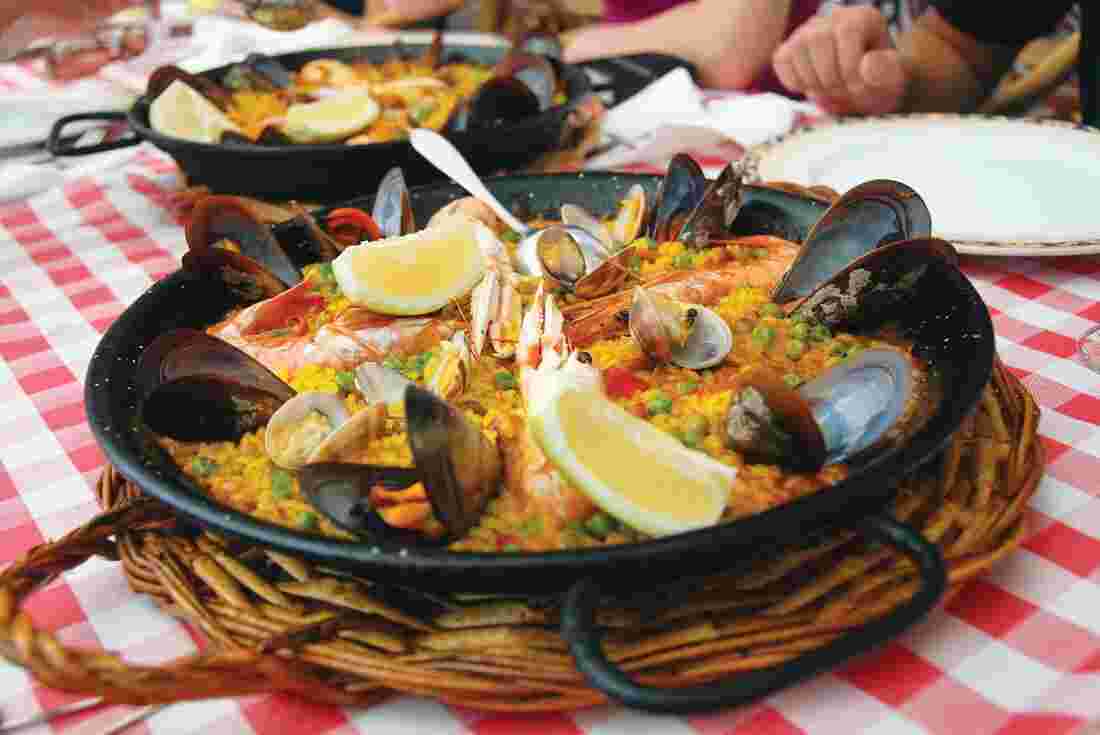 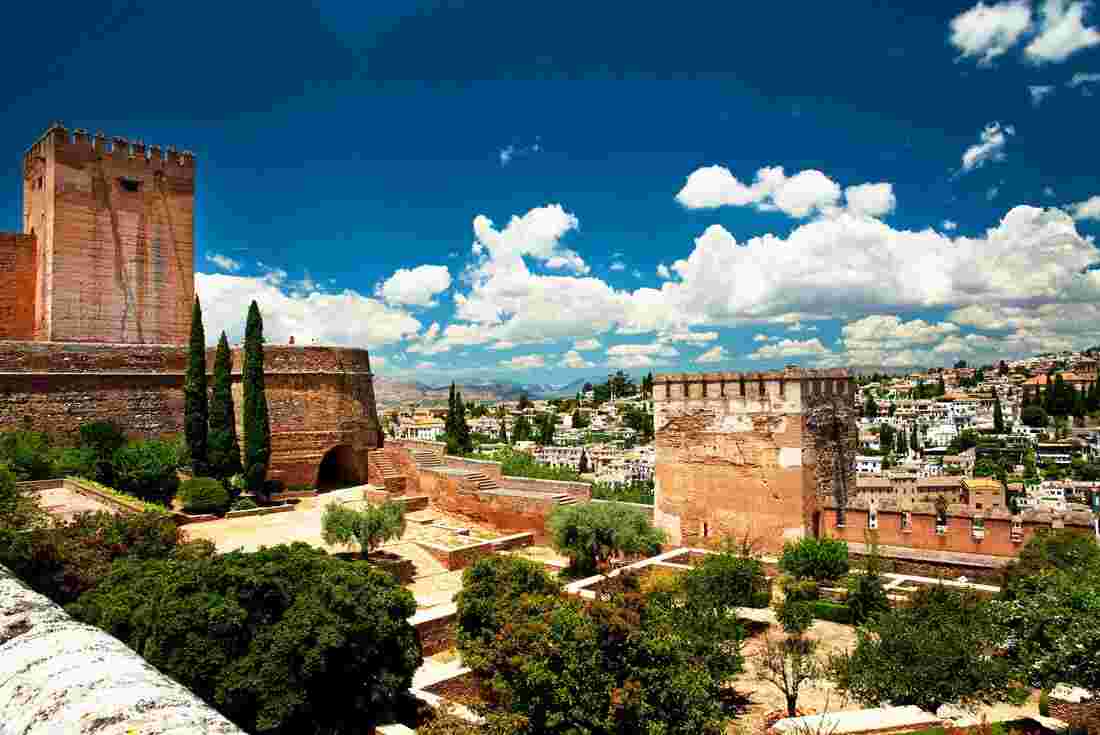 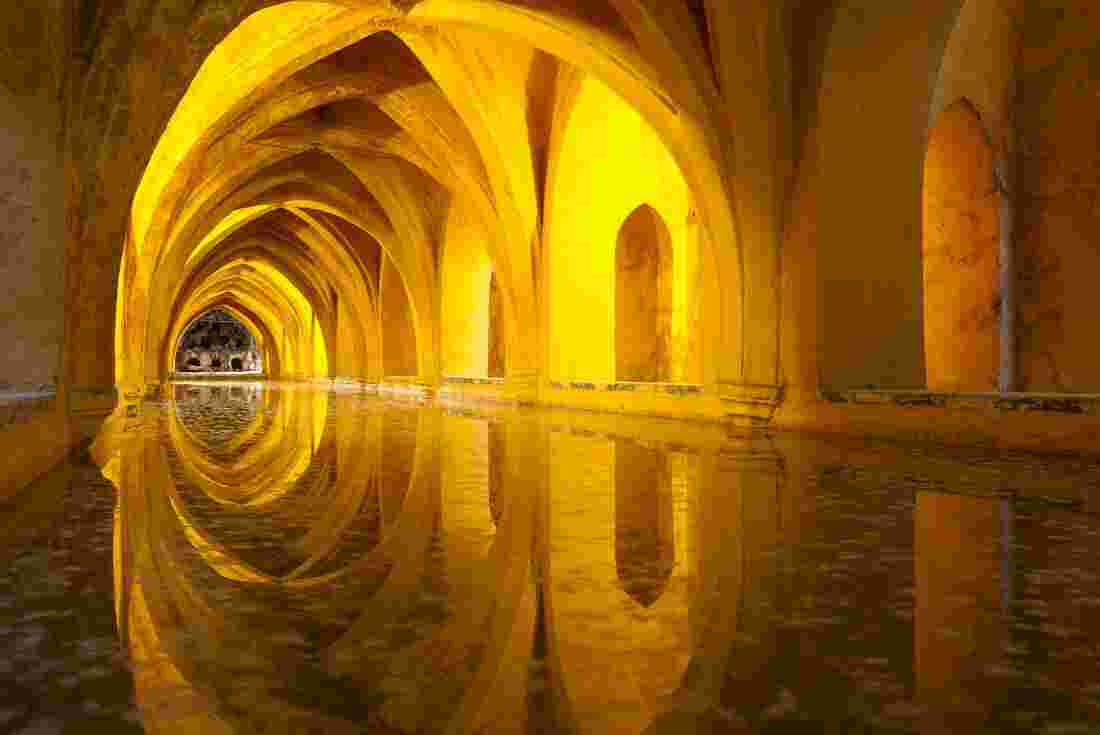 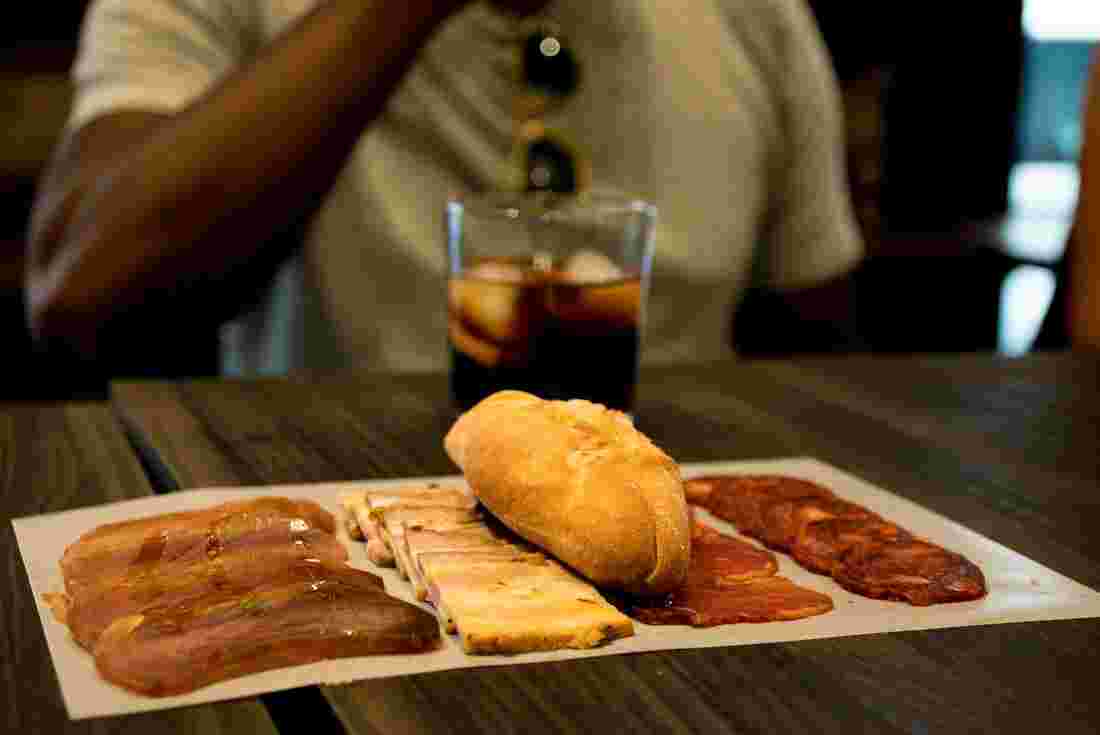 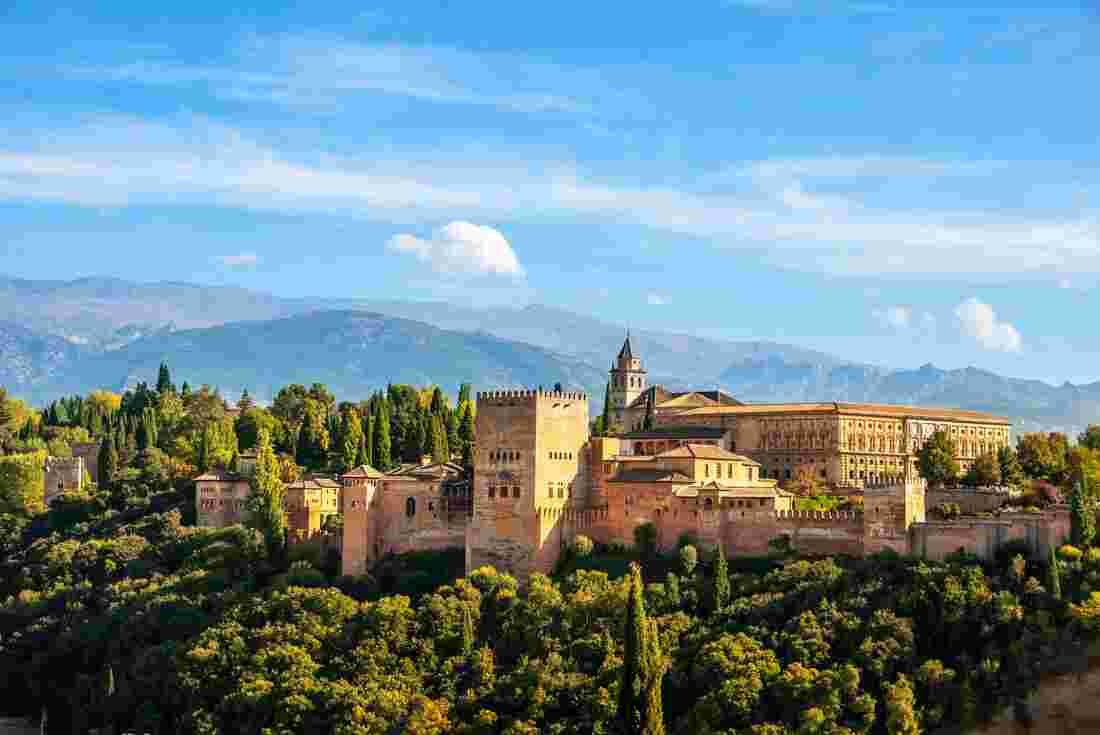 Hola! Bienvenido a Sevilla. Welcome to Seville. There are no activities planned during the day, so you may arrive at any time before the important welcome meeting at 7 pm. If you do have time beforehand, take the opportunity to visit Barrio Santa Cruz – with its multicultural history, it is a great place to start. This neighbourhood was designed in medieval times to provide a shaded space from the Andalucian heat. Our hotel in Seville is centrally located near the Alcazar Gardens, so it's a perfect base for your explorations. After your welcome meeting, take an orientation walk around the close neighbourhood and then why not head out for a dinner with your group (at your own cost), where you’ll have a chance to sample some local tapas.

Have an easy morning before heading on an orientation walk with your leader. Explore the maze of narrow cobblestoned streets and sun-speckled squares in Barrio Santa Cruz, also known as the Jewish Quarter, and El Centro. Pass by the grand gothic-style Catedral de Sevilla, the burial site of Christopher Columbus, the Giralda, built as a minaret for the Great Mosque of Seville, and the magnificent Alcazar Palace, one of the country’s most impressive and historic monuments. The afternoon is yours to explore these sites further – the gardens of the Alcazar Palace are particularly impressive. Tonight, you can join the Sevillanos (Seville locals) and soak up the ambience of the city as it comes alive after dark. The locals usually dine late, so embrace their schedule. Perhaps round off your evening with an optional flamenco show; your leader will offer you some history of this unique dance style.

After breakfast, travel by private minibus to Ronda. This little town, perched on a mountaintop, is one of Spain's oldest villages, dating back to the 9th century BC, and arguably its most spectacular. Settle into your rooms with a view over the Puente Nuevo bridge crossing the wondrous El Tajo Canyon, famous for the buildings that precariously perch on its rim and the stunning waterfall which spills into the Guadalevin river below. As tempting as it may be to sit in your hotel all afternoon and soak in this epic view, there’s so much to discover here! Head out on an orientation walk with your leader and visit the historic Plaza de Toros de Ronda, the birthplace of modern bullfighting and one of the country’s oldest arenas. Stop off at several viewpoints along the Puerta de Almocabar, an ancient stone gate, and check out the Arab Walls while learning about the town’s Islamic heritage. In the evening, you might like to enjoy some tapas and a glass of crisp Spanish beer in one of Ronda's lively local eateries.

Bullfighting is illegal in most countries, but remains legal in some areas of Spain. While supporters consider bullfighting an art form or cultural event, and in a recent court ruling has even been declared to be part of Spain's 'national heritage', we discourage our travellers to support this activity due to the pain, fear and discomfort the animals experience during these public shows. Please see our stance on animal welfare for further details.

Today you will transfer by private minibus into the hills surrounding Grazalema National Park. Your first stop is Molino El Vinculo, a traditional, family-run ‘cold’ olive oil mill. Enjoy a tour of the factory and a tasting. Andalucia is the world's largest producer of olive oil, and the locals enjoy it at all times of the day. It is also the basis of Andalucia's most famous contribution to world gastronomy – gazpacho. Then it's on to explore the splendid village of Zahara de la Sierra. The awesome mountain-top location of this whitewashed village makes it visible for many kilometres. It's also known as the 'Moorish Eagle's Nest'. Your leader will take you up to the 15th-century watchtower from where you can marvel at the spectacular views over the Zahara-Gastor Resevoir and the surrounding countryside. From here it's a short drive (approximately 30 minutes) over the stunning Puerto de las Palomas (Dove Pass), high up in the sierras, to the village of Grazalema, another beautiful whitewashed hamlet. Take your time to explore the winding alleys, then return back to Ronda for the evening.

Please be aware that the Andalusian landscape is very hilly and mountainous. Today's day trip is a great opportunity to discover remote villages, but please be aware that some people may find the area's topography very demanding.

Today is as clear as the blue Spanish skies in summer. You can choose your itinerary for today – your group leader will have a whole list of recommendations in Ronda and the surrounding area. Perhaps go for a walk into the picturesque gorge or along the Puente Nuevo, walk along a country path surrounding the town, visit a local museum, do some shopping, or simply relax, have a coffee and enjoy the small-town atmosphere. Another fantastic option is to pay a visit to Ronda’s Arab Baths. Take a step back in time to the 13th century as you explore amazingly well-preserved chambers which once served as a place for Ronda’s locals to rest, relax and cleanse themselves before entering the mosque next door.

After breakfast, continue to Granada by private minibus (approximately 3-4 hours). Along the way you will take in views of Andalucia’s rich and diverse landscapes. In Spring, you may still see snow on the peaks of the Sierra Nevada mountain range in the distance as you approach Granada. Arrive in the city and walk through the historic Christian cathedral district to witness the Moorish influence first-hand. In the afternoon you will be taking part in an exclusive local produce tasting taking place in a small, family run delicatessen. Try local Iberian ham, different types of cheeses, jam, olive oil and other gourmet products from around Spain, including some wine. Afterwards there is the option to visit Granada Cathedral and the Royal Chapel (which contains the tombs of Queen Isabel and King Ferdinand from the early 16th century). Alternatively, you can wander through the Alcaiceria (old silk market area). In the evening, you may want to go out on a tapas tour of the city, through some of Granada’s lively squares beneath the Alhambra Palace. Granada does this style of food like no other city in Spain. Alternatively, head to one of the small flamenco taverns around the city and see how the art form here differs from Seville's version.

Today make a visit to Granada's impressive Alhambra Palace. An entrance ticket and a guided tour is included in the trip and grants you the visit of the Palace and the Gardens. Discover this 11th-century marvel and its dominating red fortress towers, palace decor, architectural styles, and magnificent gardens. It's all set against the backdrop of the Sierra Nevada mountains. With fountains, impeccably maintained hedges and pools, centuries-old defensive walls, turrets, and views overlooking Granada, this renowned palace will not disappoint. Make sure you allow enough time as the Alhambra is made up of three parts: the Alcazaba, the 11th-century Muslim wing which features spectacular views from its towers; the Palacio Nazaries, the centre of the complex; and Generalife, the summer palace of the sultans. After your visit ask your leader to take you deeper into Granada’s Moorish Albaicin quarter and to the area of traditional tea houses. The view from this area across to the Alhambra Palace is not to be missed. Tonight, perhaps meet up again with the group for dinner.

Due to high demand and to be able to control visitor numbers, local authorities have implemented a timed ticket slot system for the Alhambra Palace. Depending on your departure date the time of your group's visit can vary. Please note that tickets are nominative, and you will need to advise us of your passport details at the time of booking as we are unable to organise tickets for you without them. Details will be counter checked at the entrance, so make sure you bring your passport with you at the time of the visit.

There are no activities planned for today, so you are free to leave your accommodation at any time. If you would like to stay on in Granada, we don’t blame you! Additional accommodation can be arranged when you book (subject to availability). Granada also has flight, rail and bus connections to major Spanish cities and other European hubs.

There are currently no scheduled departures on our Highlights of Andalucia trip. If you are interested in other trips in the region visit one of the links below.

1. A guided visit to the Alhambra Palace and Gardens is included in your trip. Please note that due to high demand and to be able to control visitor numbers, local authorities have implemented a timed ticket slot system for the Alhambra Palace. Depending on your departure date the time of your group's visit can vary. Please note that tickets are nominative, and you will need to advise us of your passport details at the time of booking as we are unable to organize tickets for you without them. Details will be counter checked at the entrance, so make sure you bring your passport with you at the time of the visit.
2. Please be aware that the Andalusian landscape is very hilly and mountainous. This trip is a great opportunity to discover remote villages, but please be aware that some people may find the area's topography very demanding.
3. A single supplement is available if you’d prefer not to share a room on this trip. The single supplement applies to all nights of your trip and is subject to availability. Please note that due to the small properties we use in Europe there is only a limited amount of single supplements available per trip departure. If you would like to book a single supplement and enquire about availability, please speak to your booking agent for further information.