Marching in the Tel Aviv Pride 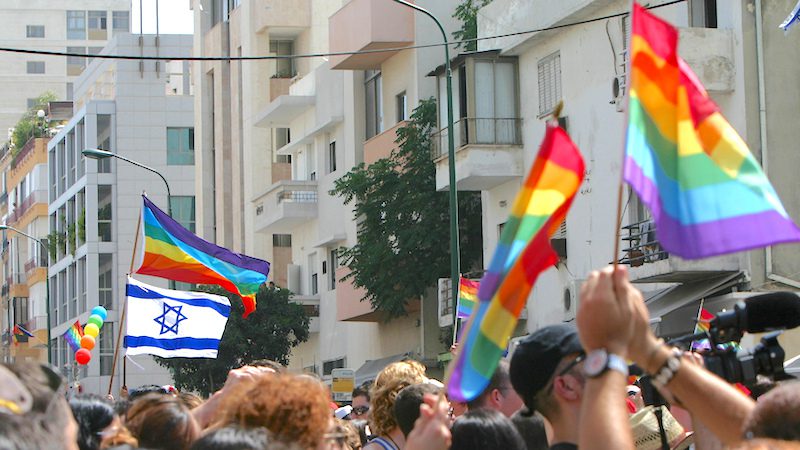 Our decision to visit Tel Aviv was inspired by a chance encounter in a Jerusalem hostel. My French-Canadian travel buddy, Pierre-Yves, was perusing the bookshelf when he struck up conversation with a flamboyant Irish woman, who had assumed he was my boyfriend.

“Can you recommend anything?” he asked, flipping through paperbacks on the middle tier.

“Yes,” she replied curtly, misunderstanding his question. “Tel Aviv Pride is tomorrow and it’s supposed to be spectacular. You and that man on the couch look like a couple o’ fun gays.”

“Oh! Well, I’m fun and he’s certainly gay!” replied Pierre-Yves. I looked up from a map to see my friend gesture from across the room. Unaware of the topic of conversation, I smiled dumbly and waved. The stranger gave an understanding nod. A disquieting grin cracked the rouge of her cheeks. 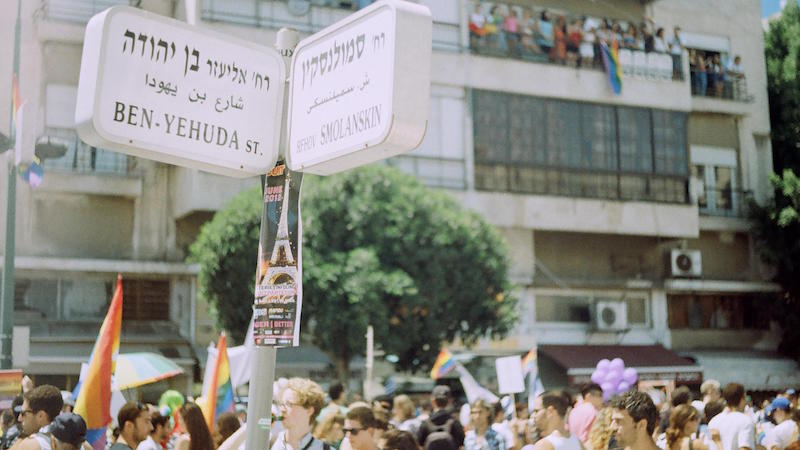 The next morning, our (mercifully) air-conditioned coach cut westward through relentless plains of beige sands, sculpted like meringue into high peaks. I was listening to the gayest tracks I could find on Pierre-Yves’ iPhone. Celine Dion’s transcendent voice seemed to transport us through space, as we made our unplanned pilgrimage to the biggest LGBTQI festival on the Asian continent.

Israel, more broadly, is a bastion of LGBTQI rights in the Middle East. In recent decades, the government has made it illegal for Israelis to discriminate based on sexuality; repealed sodomy laws; allowed LGBTQI citizens to serve openly in the military (a reform enacted almost 20 years before the USA caught up); allowed individuals to adopt the children of their same-sex partners; and made it illegal to discriminate against school children based on gender identity. While same-sex marriages are still illegal, the state recognises those conducted overseas (hey, still beats Australia). 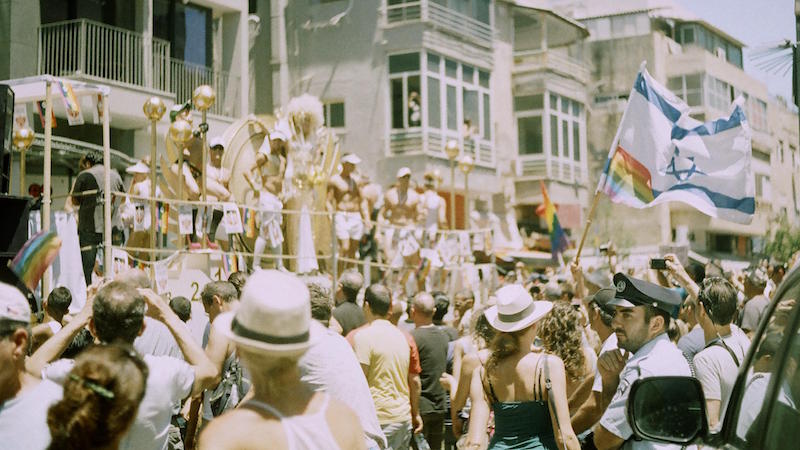 These decisions stand out in a region considered to be one of the most dangerous for LGBTQI people in the world. In some Middle Eastern countries, LGBTQI people face discrimination and violence, ranging from fines or imprisonment to state-imposed death sentences (Iran, Yemen, Saudi Arabia, the UAE), murder by rebel groups (Syria, Iraq), or honour killings by family members (many countries). In countries with more progressive laws (Jordan, Lebanon), LGBTQI citizens are still unable to marry and face prosecution for public affection.

As our bus pulled up, we found our new hostel bursting with guests who had flocked for the festival. Suddenly, Pierre-Yves tore my pack from my shoulders and threw it, with his, to the ground.

“What did you do that for?” I shrieked.

“On est tard (we are late)!” he scolded. More adept at my sexuality than I was, my companion slipped on a coral shirt patterned with frangipanes. I grabbed the most vibrant garb I had: a drab, white chemise with subtle, silver pinstripes. At least one of us looked the part. 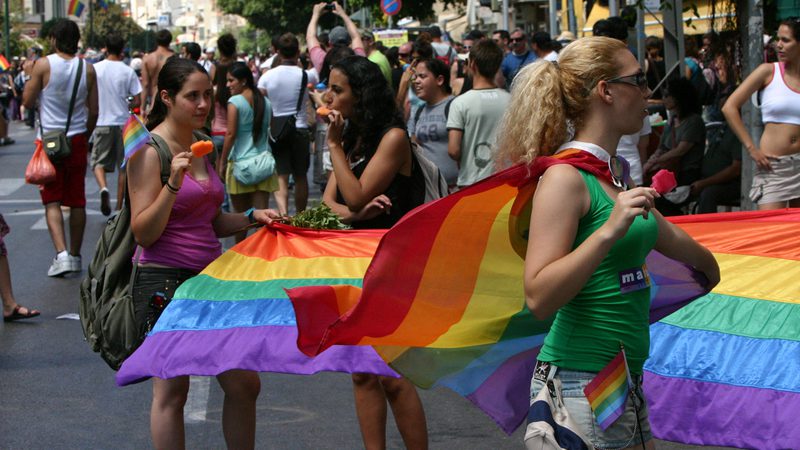 We heard Tel Aviv Pride before we saw it. Metallic horn blasts punctuated the white noise created by thousands of voices. We had missed the parade’s assemblage in Meir Garden near the city’s centre, but caught up in Bugrashov Street, one of Tel Aviv’s main drags. As we approached, my gaze fell from concrete rooftops that framed a flawless sky, past fire escapes and canvas shades, to the street scene in front of me. Like a lush canyon between barren cliffs, the street was teeming with life in technicolour. Collected by wayward dawdlers at the rear, we stumbled forth into the throng.

Immediately, I felt exceedingly pale and scrawny. Heavily bronzed, muscled and semi-nude men thrust us about like ping pong balls, knocking my glasses to the bitumen and grinding on Pierre-Yves. Attempting to carve a stance against the current, I looked up to catch the woman from our Jerusalem hostel riding the shoulders of what I could only describe as the impossible, leather-clad lovechild of Arnold Schwarzenegger and a saltwater crocodile. She tossed back her shimmering purple hair and cackled like a drunken despot, before smacking the reptile’s chest and riding deeper into the fray. 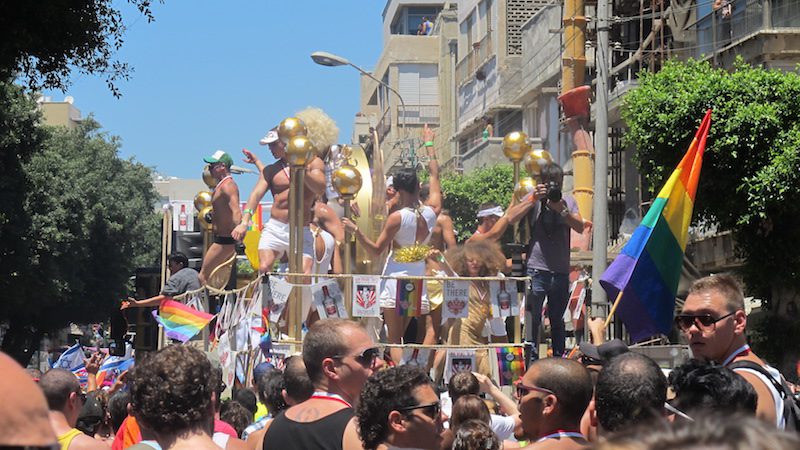 As the crowd snaked along Ben Yehuda Street, I noticed the diversity of its constituents. Young families, rainbow and nuclear, strode past aliens on stilts wearing spines like a dragon’s thorny armour. Men wearing office attire from the waist up (and not much in the other direction) stopped Pierre-Yves, who willingly grinned for their photos. Spectators sent colourful streamers cascading from balconies like passengers from a departing ship, and applause thundered as an elderly woman danced the salsa on her fourth-storey terrace.

As I looked to my left, I noticed a young soldier in boots and camouflage gear, regarding the sky as he marched solemnly and alone. I was moved as he tentatively, though with determination, lifted a rainbow flag above his head.

When Ben Gurion Street opened onto Alma Beach, the mass dissipated like fireworks. Sweating under the desert sun, Pierre-Yves and I tossed our shirts aside and sprinted for the Mediterranean Sea. As cool water lapped my chest, I turned northwards to see the lone soldier plunge into the baptising liquid. Refilling his lungs, he squinted at the people dancing and embracing on the shore. I think he broke a smile, though it may have been a trick of the light. 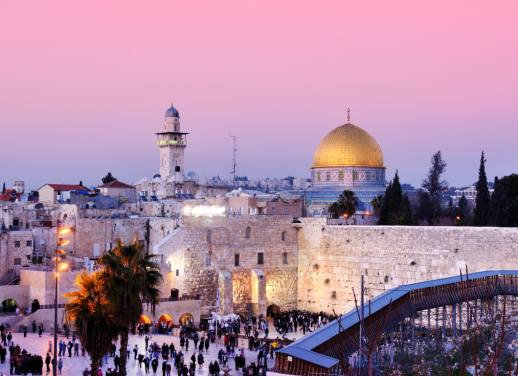 I am a 20-something-year-old writer, musician and language teacher. This means that I spend most of my time on job-search websites or in call centres, concocting travel plans while praying my landlord forgets I exist. I’ve lived in Melbourne, Copenhagen, Paris and Quebec City and travelled elsewhere. Of all countries I've visited, I found Russia to be the most fascinating and Norway the most beautiful. My dream is to write a YA fantasy book series, a coming-of-age television script, a Liszt-inspired piano concerto, a socialist manifesto, Emma Watson's next speech to the United Nations, ten commandments for a post-climate-changed planet, and a 15-page love letter to Gabriel García Bernal. BY THE TIME I’M 30.