Home » What it’s like to road trip through Mongolia
PhotographyStories 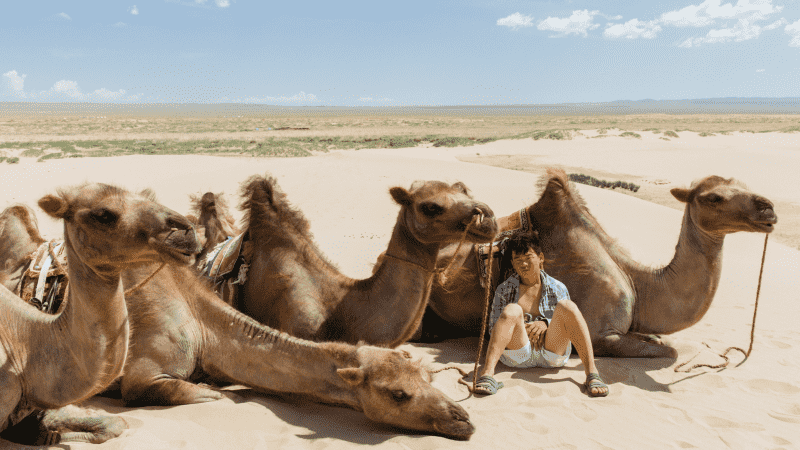 Light floods the green expanse and glides through the rooftops of the surrounding Gers, perfectly reflecting on the hind of the goat in front of me.

A woman in her 50s, wearing a soft purple gown, her hair tied up in a spotty scarf crouches next to me and pulls on one of the goats teats. Milk screeches into the bucket with each pull, splattering and diving again and again. She instructs me to try, and tentatively, I take the flesh in my hand and begin making the same action as she does. It creates mere droplets of milk and now it’s her shrieking with laughter at my pathetic attempt to milk a goat. I leave her to the job, I’m clearly not a natural goat milker. 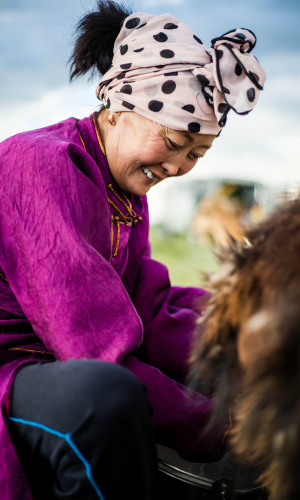 Sometimes travel surprises you in the most wonderful ways. I’d never have expected to find myself in the steppes of central Mongolia, a few days drive from any sign of modern civilisation, learning how to milk a goat. But life takes these funny turns, and here I am in a country that seems so removed from the rest of the world, living in Gers (yurts) and road tripping south to the Gobi Desert with a group of strangers who eventually became friends. It all started a few days earlier, after I touched down on Mongolian soil in the capital city of Ulaanbaatar. Unlike the Asian cities I was used to, Ulaanbaatar felt like an overgrown village. The streets were wide and quiet, dotted with cafes and communist style architecture. Up at the Zaisen memorial on a hill above the city, I spotted Ger camps on the edges of the city, fragmenting as they faded into the emerald hills behind.

In the few days I spent in Ulaanbaatar, I came to really enjoy the city with its beautiful temples, intriguing markets and quirky vegan cafes. But I knew that the real Mongolia lay outside of this city, in the deserts and mountains and wide open expanses of steppes. I was heading next towards those hills, to see what this country was all about. 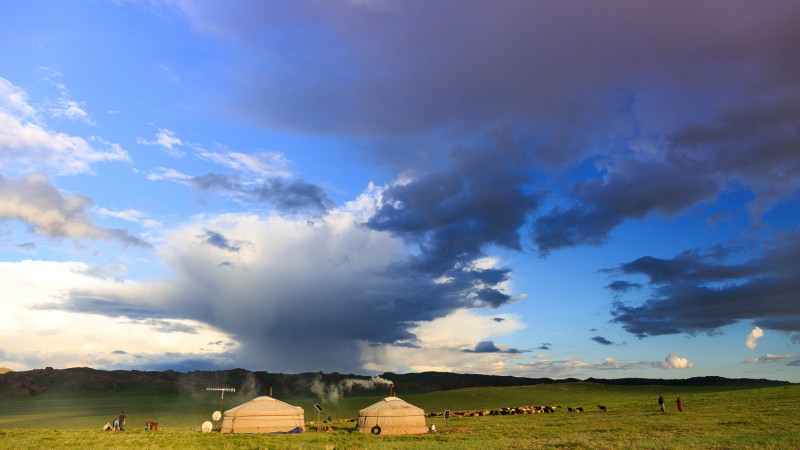 Which brings me back to goat milking between Gers and a Mongolian mother with a pink spotty headscarf. It’s our first night on the road and our driver has brought us to a family and their three Gers on a lonely steppe behind a rocky outcrop. The men rear the horses as the women milk the goats and we watch their simple lives take shape. That night it’s our first night in a Ger tent, a dome structure with a fire in the middle. Alongside the family, we sleep on the floor on top of blankets.

During the night, I climb over the bodies outside the tent to pee between the bushes in the darkness. The sky has erupted into thousands of stars, and the milky way soars above my head. I look at the sky as if I’d never seen it before, certainly, I’d never seen it quite that breathtaking.

Day in, day out we drive and drive through barren landscapes. Occasionally we stop at a gas station in a nowhere town. The presence of foreigners in these places is clearly uncommon as the children stare confusingly at our cameras and fair hair. We stop by shops backed with packaged foods, sometimes we’ll pick up a few rare fresh vegetables or a loaf of bread. We carry all the food and water we need for the week in the back of the van, a concoction of mostly just add water noodles, pasta and jars of sauces.

The harsh environment of the Mongolian steppes mean it is hard to grow vegetables and it’s rare to come across any. When we do stop by Mongolian families in the evenings, Aaruul (dried curds) or slightly stale bread is usually offered to us, alongside a cup of Suutei, a local salty milk tea, which I never quite warm to. 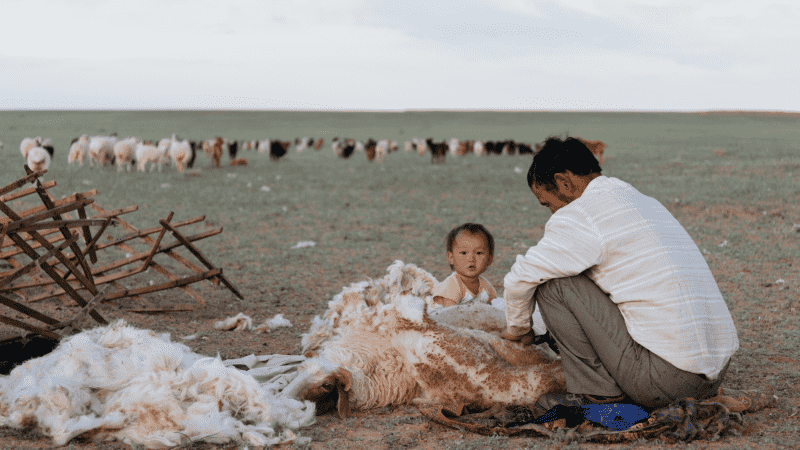 We sleep under the most breathtaking sunset and awake to a young boy and a collection of camels. These two humped beasts once carried packs along the Silk Road, but today they are ready to carry a bunch of unwashed backpackers into the desert. Every desert I’ve visited in the world is different, but the Gobi sticks in my mind like no other due to the vast expanse of sky. From the highest dunes, we can distantly spot the Chinese border.

RELATED: MEET THE 24 YEAR OLD WHO TREKKED ACROSS THE GOBI DESERT

We prepare to return to Ulaanbaatar, first via a bizarre ice canyon and then back to some of the same families we had stayed with on the way down. I have a go at sheep sheering and realise that’s not my forte either. I stick to photographing the daily life and attempting to make variations on dried Korean noodles and water. In a week, going to the toilet in bushes, not showering and eating the same foods becomes somewhat natural. While the nature is expansive, it’s the lifestyle I have admired the most while travelling through Mongolia. There’s a real freedom to the way of living, and it’s something I learn from as I milk goats, live in Gers and pee in open spaces. Compared to the tiny boxes of city living, out here, each family roams wild in the mass of land, and children run free through their ever lasting gardens. Living completely off the land, moving as the seasons change, and carrying only what they need on horseback.

I might not have a future as a goat milker, but I will take these wild open spaces and unforgettable night skies away with me, hoping that it perhaps encourages me to remember to live a little simpler, a little lighter.

Eager to discover Mongolia for yourself? Take a look at all our trips to this incredible destination. 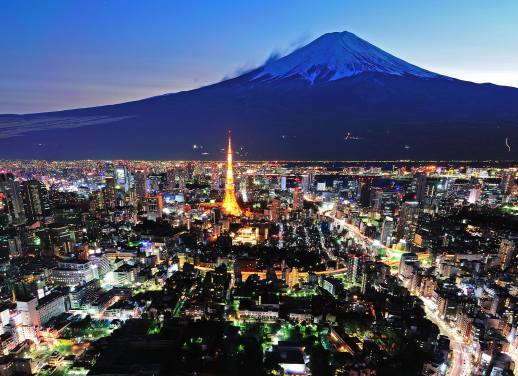 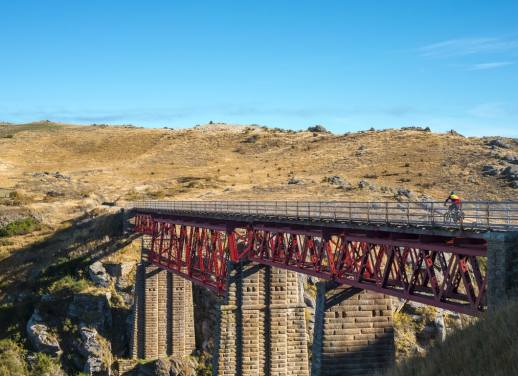 Just returned from a very similar trip. Wonderful experience. However we had fresh tomatoes and cucumbers every day. They were delicious.

Thanks for the warning,Anna. I’ll stick to UB to fill my Mongolia square.