Home » Hiking towards equality: these are the women changing the face of trekking in Nepal
Stories

Hiking towards equality: these are the women changing the face of trekking in Nepal

We pass a man who looks to be carrying at least 60 kilograms on his back. Another man slowly edges past with a thick plank of wood balanced on his head. He proceeds to walk up an uneven flight of stairs and disappears from view.

‘That looks so tough,’ I say to Manisha, one of our porters who’s fallen into step with me.

With a group of eight other trekkers, and a team of nine female porters, we’re on our way through Nepal’s famous Annapurna Mountains on Intrepid’s 15-day Annapurna Base Camp trek. We’re only a few days in, but the higher in altitude we get the more porters we see weighed down by heavy loads with just about everything you could think of: gas canisters, heads of cabbage, camping equipment, bottles of beer and tubes of Pringles.

‘Many of the trekking companies here don’t have weight restrictions,’ Manisha tells me. ‘They just load up their porters with as much as they can carry. I’ve seen people carrying 100 kilograms (220 pounds) along the trail’. Manisha is 23 years old and from Pokhara, a smaller city west of Nepal’s capital. She’s been working as a porter with Intrepid for two years, during which she’s also found time to finish her degree in microbiology, learning about the plants, birds and environment here in these mountains. One day she hopes to work as a trekking leader. 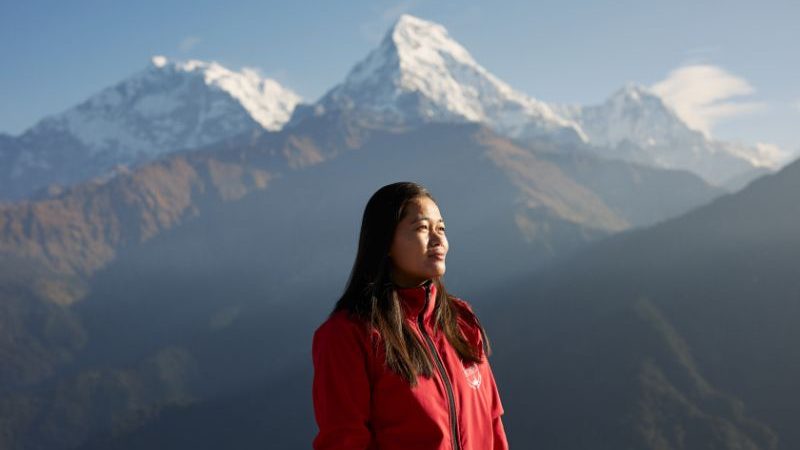 Manisha has been working as a porter for two years.

Seeing female porters in Nepal isn’t really the norm; the trekking industry here is very much male-dominated. Women are generally considered to be not strong enough, not fast enough. We pass a few other women on the trail, overloaded with heavy goods, and their expressions set in steely determination. But they look strong to me.

RELATED: MEET THE ORGANISATION HELPING TO LIGHTEN THE LOAD FOR NEPAL’S PORTERS

Our all-female crew – comprised of trekking leader, assistant guide and porters – is an especially unusual sight. For one, we’re all trekking together. Most of the other groups we see are separated into two: porters are usually well ahead of the group while trekkers walk with their leader and guide behind. We all eat together too. It’s customary on treks like this for the porters to sit at another table, having their trays of dal bhat and cups of hot tea after the rest of their group has eaten. It’s also pretty rare to see trekkers and porters chatting as they make their way along the trail, but that’s exactly how we’ve been passing the time – talking about work, studies, basketball and family.

Srishti, our leader, has been taking trekkers up and down various Nepalese mountains with Intrepid for over two years. Before that, she worked as a porter for a season and as an assistant guide for another season. 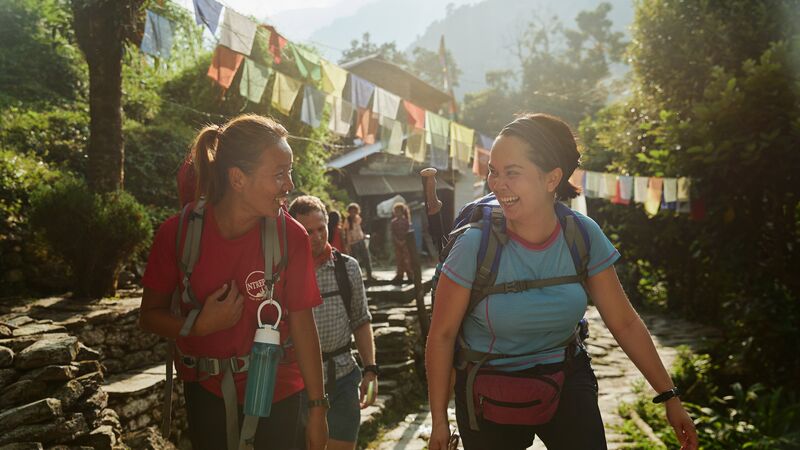 ‘Being a porter was unforgettable. It came with many challenges though,’ Srishti says, as we slowly walk up a flight of punishing stone steps. The scenery in the Annapurnas is spectacular, but the steep ups and downs feel relentless after a few days of walking. I can’t imagine what it must be like carrying more than ten kilograms on your back after walking up a thousand-plus uneven steps – it’s tough enough with a day pack.

RELATED: EVERYTHING YOU NEED TO KNOW ABOUT TREKKING TO ANNAPURNA BASE CAMP

‘Carrying a heavy backpack can be very hard. The first time I trekked as a porter, I had to carry the bag on my head, which was very painful. My friends and family kept telling me “don’t do this, you can’t do this”, but I wanted to. I needed to challenge myself, especially as I wanted to be a leader.’

I’ve seen quite a few porters on the trail carrying bags like this. The bulk of the load rests in a basket or bag against the porter’s backs, while a strap – which runs underneath the load – loops across the crown of the porter’s head (called a boko). The porter is angled slightly forward, so the weight is evenly distributed across their backs. 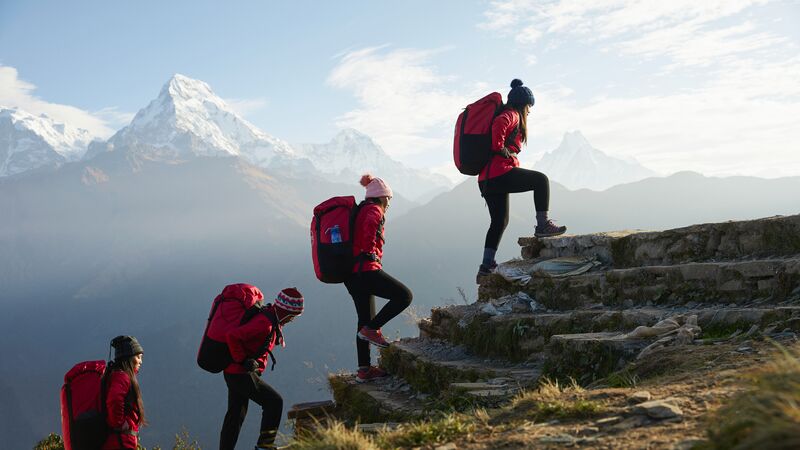 Intrepid also have a policy that all trekking leaders and guides must have trekked as a porter for at least one season before they can lead an Intrepid tour, even if they’ve worked as guides for other tour companies before.

‘I think it’s important that trekking leaders have spent time working as porters,’ says Shrishti.  ‘Because I’ve done it myself, I understand what the porters are going through. I know when they’re feeling tired and when they need a break, or when they might need something to eat. If I hadn’t been a porter first, it would be more difficult to see if they’re having problems.’

Srishti got into trekking for the same reason most of the women did: a love of Nepal’s mountains, being outside, and meeting people from around the world. Her sister, Robina, is with us on the trek. She’s just finished her bachelors in Sociology and Anthropology and, while she enjoyed studying, but she tells me that trekking is her life. Robina has been working as a porter for two years now, and hopes to be a leader one day too.

RELATED: IT’S TIME FOR THE TRAVEL INDUSTRY TO STAND UP FOR ITS PORTERS. THIS IS WHY. 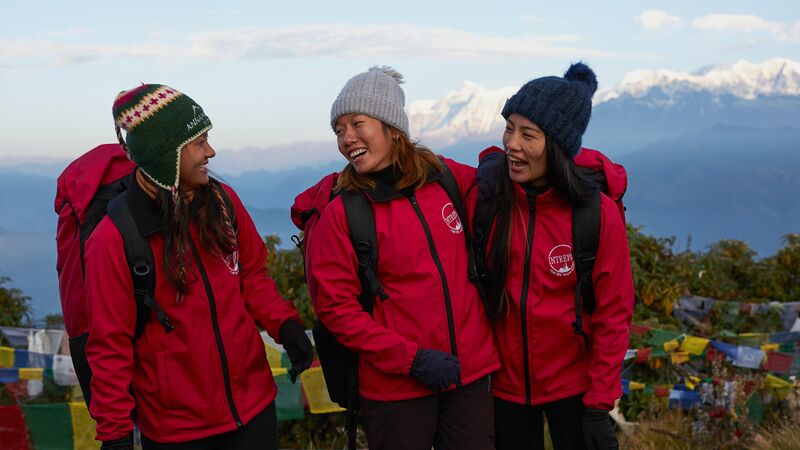 Robina, with Misty and Preity, on the trek to Annapurna Base camp.

‘There are less opportunities for women in Nepal, especially in jobs like this,’ says Robina. ‘People say women can’t do it, because they’re too weak or have too many problems. But when they see us out on the trail, carrying the bags and working hard, their minds change. That makes me feel so proud of what we’re doing.’

We stop for lunch just outside the forest and crowd around the table together. Kusum and Shanti, both 21, sit next to me and pepper me with questions about life in Australia – my work, my family, what I do for fun. Kusum talks about how much she loves dancing and playing basketball, and meeting travellers on Annapurna’s mountain trails.

A trekker from another group – an Australian man in his late-fifties – walks over to us as we’re getting ready to leave.

‘You just don’t really see this,’ he says, pointing towards the group. ‘I’ve been trekking in Nepal for over twenty years, and I’ve never seen a group of female porters. This is great, and so important.’ 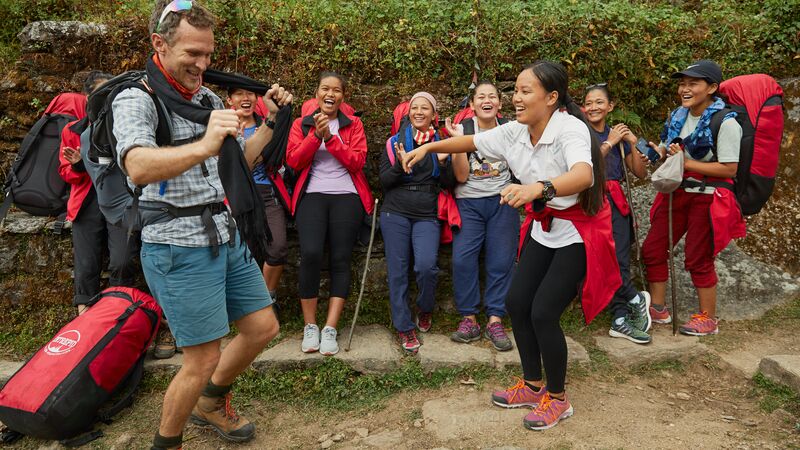 Kusum dishing out some dance moves on the trail.

We talk a little about how Nepal has changed over the years, and about how reliant the tourism industry here is on the porters. Without them, trekking experiences like this would be completely different – sure, we’d all be carrying our own gear, but we’d be missing these connections as well. He keeps smiling, and shaking his head. ‘This is just so good. What an experience for you all.’

In the afternoon, Manisha and I walk together again. I ask her how it’s been, travelling with a group of women, and what sort of reaction they’ve been getting from male porters along the trail.

‘When I first started trekking, it was hard. Men would laugh at us! But when we’re actually out here, we see these girls in villages. They run out and say “I want to be like you! I want to do what you do!”. Other times, people take photos. We might not be as strong or as fast, but we can still do it.’

CHECK OUT OUR FULL RANGE OF ANNAPURNA TREKS HERE

The next few days of trekking are tough. The higher in altitude we get, the more slowly we take it. We’ll be getting up to 4130 metres (13,547 feet) when we reach Base Camp. Up ahead, Srishti is laughing with a couple of the porters who have stopped for a break. When we get closer, I hear her calling ‘slowly, slowly.’ She’s looking out for the porters, making sure no one rushes or pushes themselves too hard.

Despite having trekked extensively in Nepal’s Ghorepani and Pokhara regions, this will be Manisha’s first time at Base Camp. She’s just as excited as I am about reaching camp – and having a hot tea. 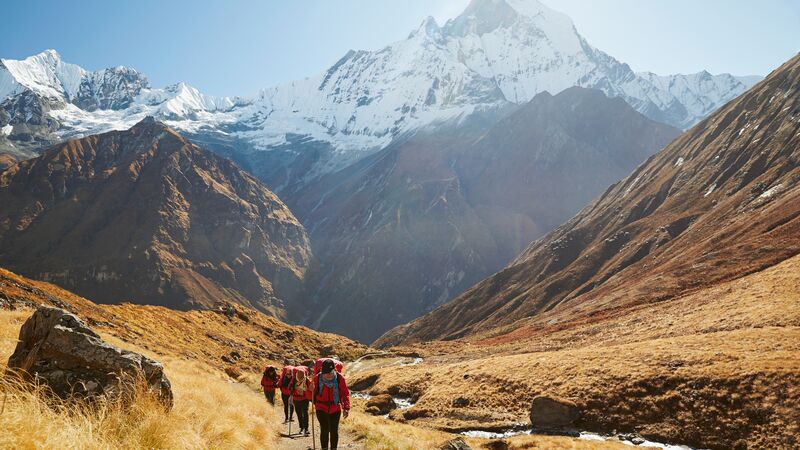 Making our way into Base Camp.

‘It feels thrilling to be almost there, and to be going so high,’ she tells me as we make the slow walk out of Machhapuchhre. The temperature is well below zero, and we stamp our feet to get the cold out of our bones. A stream running through the grassy valley has frozen over, and our breath hangs in the air as we huff and puff up the stony path. ‘I love trekking, I love the mountains, I love being in a cold climate. When you’re out here, you forget about all your problems.’

We’ve only been walking for around an hour when the sign for Annapurna Base Camp comes into view. It’s adorned with the prayer flags you see all across the country, as well as national flags for Nepal, Australia, the USA. The faster trekkers in our group slow down and wait for the rest of us to catch up. 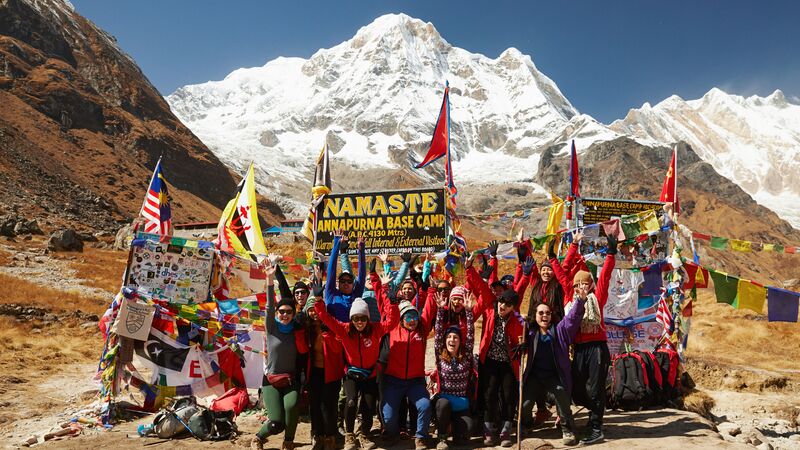 Together we cross the threshold into Base Camp together. We’ve made it. We all dance and clap and sing. We all embrace. There are tears. I feel proud of all of us. We’ve taken tens of thousands of steps, with frozen fingers and sunburnt noses, with bruises and aches and painful joints. There were moments when I didn’t think I’d get here, and without the support of Srishti and Manisha and the girls, maybe I wouldn’t have. But we all made it. Together.

Manisha joins me for a hot drink when we get to the teahouse, and I ask her how she’s feeling. ‘Amazing,’ she says. ‘I feel so inspired, and proud. I’ve loved being out here, with these strong women. We can do anything men can do.’

Travel in Nepal with an all-female crew on our 13-day Women’s Expedition from Kathmandu – full details here. Explore our full range of Annapurna treks here.

All photos by Matt Cherubino.

Hi, I am so happy to read this. I would really appreciate it if you could give me the numbers of female porters. I plan on doing the Mardi trail in March and would be very happy to do it with another lady porter. I am a solo woman. Almost 40..have not hiked in years.. And I’m dreaming of doing it without anyone else.. Because there is simply no one.. Thanks heaps.

Hi Rose! We’d love to help you go hiking in Nepal. We have 10 female porters and 2 female trekking leaders. You can request both a female porter and a female leader, if you like. The porter carries your bags (up to 10kg), or, if you’d rather carry your own, then you’d just need a leader. If you’re interested, you can reach out to our Tailor-Made team and they can help you arrange it all. 🙂 https://www.intrepidtravel.com/tailor-made

Well Done Ladies and Well Done Intrepid, Next trip I book I will ask for a female leader … again excellent work

I love to read articles especially when the content is about hardworking Nepalese female porters and guides of Nepal.