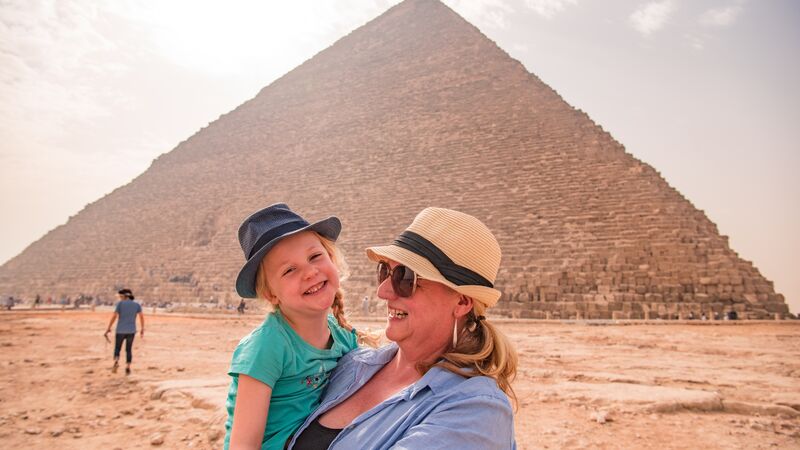 Egypt was the first country I travelled to. I remember driving through the chaotic streets of Cairo in the early 1990s, terrified by the seemingly limited road rules, and fascinated by the magic of it all. I was glad I chose Egypt as my first big adventure; it’s always held a special place in my heart.

Fast forward 20ish years, and I had the opportunity to return to Egypt, this time with a brand new travel companion. Bea enjoyed her first overseas adventure at the tender age of 18 months (a relatively easy holiday to Bali); Egypt would be the tenth country she’d visit. At five years of age, her curiosity and sense of the world was growing, so I knew Egypt would offer her a wonderful new perspective. 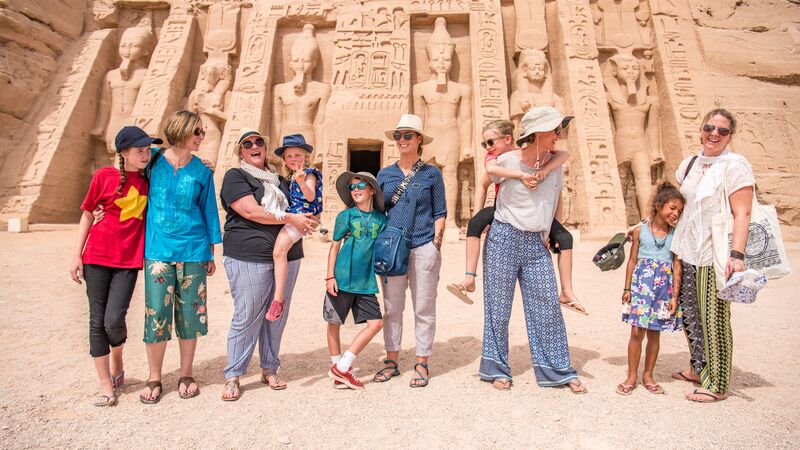 Our group at Abu Simbel.

I love travelling with my daughter. I love seeing the world through her eyes, and I appreciate her curiosity and reserved sense of adventure. Travelling as a solo mum doesn’t come without its challenges, but they’re far outweighed by the benefits.

We travelled on Intrepid’s 8-day Egypt Family Adventure with four other solo-parent families. This is what I learned about my daughter while we were there.

She’s more adventurous than I give her credit for

One of my favourite things about travelling with my daughter is exposing her to different types of food. Is she a picky eater at home? One hundred per cent. Do we battle every morning over breakfast? Absolutely. Who knew she suddenly can’t stand peanut butter on toast?? Not me! Like most kids, there are foods she adores, and will eat with great gusto, but something that was once a favourite can be easily relegated to the ‘yuck’ pile in one fell swoop.

But something switches in her when we travel. Suddenly she’s eager to try EVERYTHING – and she seems to love everything too. 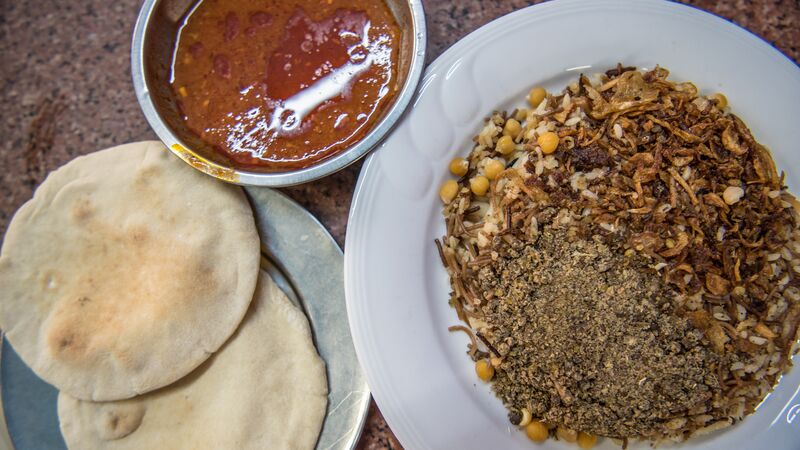 After a cruise around Aswan’s islands with our Nubian guide, we had dinner with a local family. We’re served lentil soup, and it’s delicious. All the kids in our group slurp it up and ask for seconds. Would my daughter eat lentil soup at home? Unlikely. But on a holiday like this, with other kids, look at her go.

After dinner, the kids left the table and went outside into the dusty courtyard, where a game of soccer is soon underway. The lighting is not the best but the enthusiasm is high. As I watch them play, I think, ‘This is what travel is all about. Local interaction that isn’t forced. Genuine connections.’ When it gets dark, some of the children venture indoors where singing starts and drums are handed around. It’s a night we won’t be forgetting anytime soon.

Bea says: I liked eating the felafel in the restaurants. The lentil soup was yummy too. The sweets were a bit too sweet for me. 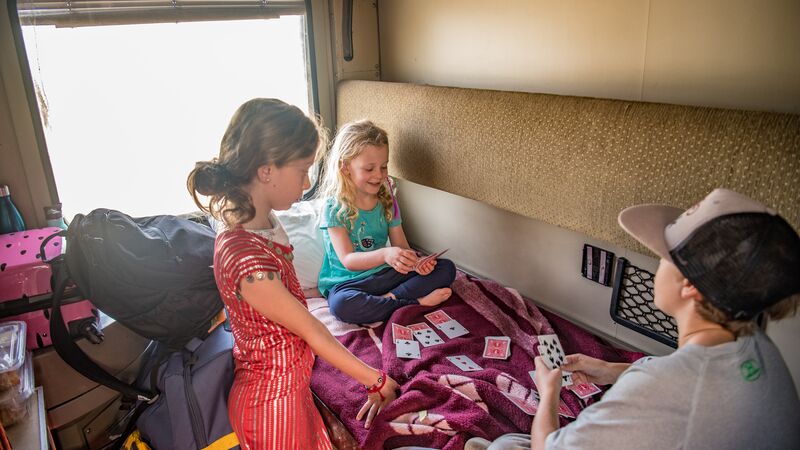 Playing cards on the train.

She has her own unique sense of independence

I love seeing how independent she is. Like most kids, she can be shy at first. But as soon as she gets some confidence, she turns into a different kid.

We had a night on a felucca and Walid, our local leader, was determined to teach the kids how to make a kite. Flying a kite is one of those simple childhood activities that most people have forgotten about. Walid spent a few days collecting materials, and then gathered the kids together and talked them through how to make a kite. This wasn’t like one of the Western ones, where you just take the kite out of the packet and insert a few rods; this was back-to-basic construction.

The kids looked up a tutorial on YouTube, and then worked together with Walid on how it would look, and how it would fly. They were so determined, and so engaged. 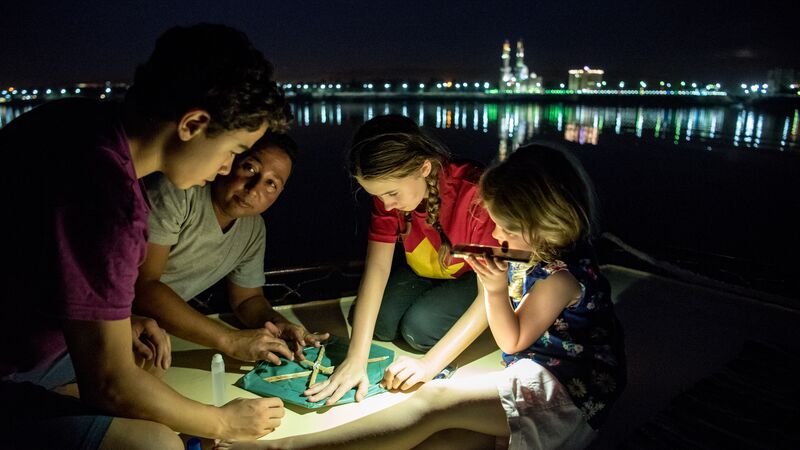 When the sun set, they asked for our mobile phones so they could use the torch for some extra light. They each took it in turns constructing the kite, while someone else held the torch and gave instructions. It was such a team effort. This simple task became a highlight of the trip – Bea will never forget making kites on a felucca on the Nile!

Bea says: Walid was so good at games! He taught me how to play thumb wars, but he beat me every time. I wanted to hold his hand everywhere we went because he knew so much about everything.

Also, I was a bit scared and nervous travelling with other kids, because I didn’t know them. But then I got used to them and it was really fun, especially swimming in the pools.

TRAVELLING AS A SOLO PARENT? WE’VE GOT A RANGE OF TRIPS JUST FOR YOU 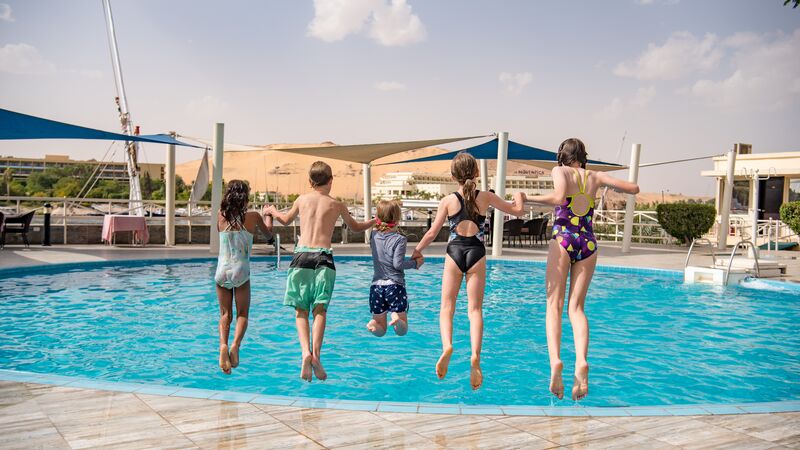 Pools are always a big hit.

Egypt has a huge issue with recycling. Walid explained that most of the local vendors think it’s convenient to give tourists a plastic bag when they buy a can of coke or a packet of chips. The kids in our group had been learning about the environment at school, so their questions and comments about recycling and waste management came from the heart. They wanted to understand why there aren’t options to recycle plastic, or compost fruit and vegetable scraps.

Bea says: At the start of the trip, we were given bags that we could keep and we still use them. Egypt don’t do very much about recycling so Walid taught us to say no to plastic bags when we went shopping. The people in the shops would just put our things into our bags and they’d smile at us.

RELATED: A CONVERSATION ON CONSERVATION – A FAMILY ADVENTURE IN BORNEO 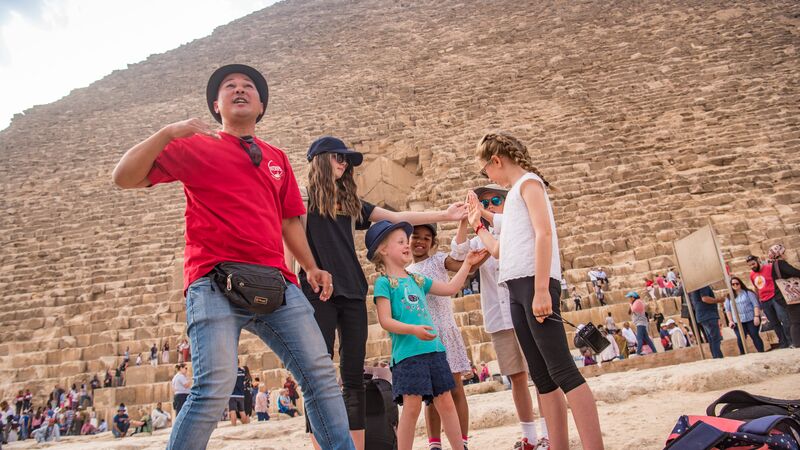 Walid and the kids at the pyramids.

Walid became so much more than a leader for our group. He became part of our family. He’s a parent himself – he has twin daughters the same age as Bea – so he knew how to explain things to the kids in a way they’d understand, like the history of the pyramids and the different pharaohs.

Because he’s got daughters of his own, he could understand Bea’s questions and curiosity. He knew how to read her too, like when she was getting grumpy, when she needed to talk about something, and when she’d had enough. On this 8-day trip, Walid was able to give her an education that far exceeded what she’d learn in a term at school.

He was also so encouraging. He’d persuade the kids to try new foods, to listen to the call to prayer, and to learn the local language. It always made me smile seeing the kids saying thank you in Arabic in a local restaurant; it’d bring a huge smile to the waiters’ faces too!

RELATED: WHAT TO EXPECT ON A FAMILY ADVENTURE IN COSTA RICA 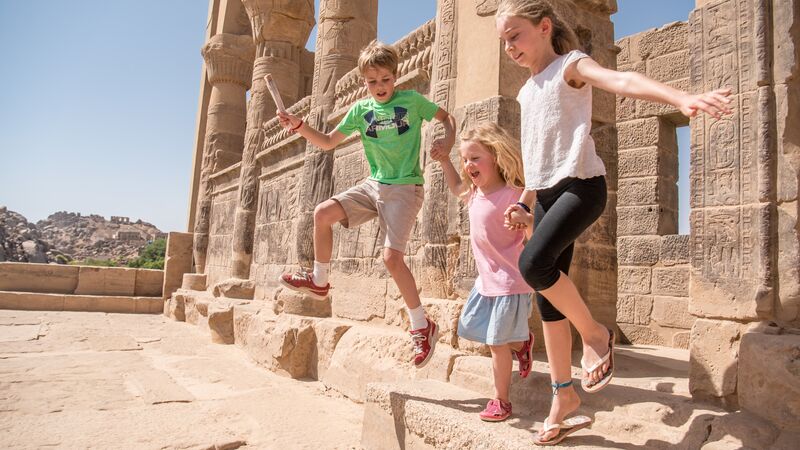 Having fun with new friends!

Bea says: I liked visiting the pyramids, and seeing the big cat in the sand! We went inside the pyramids and it was really sandy and steep. I wasn’t scared though.

What I love about travelling with my daughter at this age is that she’s such a sponge. Her views aren’t clouded by difference; she just immerses herself in the culture without bias or forethought, and she soaks everything up. Travelling on a group trip like this, with a local leader and other families from different backgrounds, gives her an experience that I could never do on my own.

Interested in an Intrepid Family adventure? Explore our full range of trips here now. We’ve also got a great range of trips for solo parents and families with teenagers too!

All photos by Pat O’Neill. 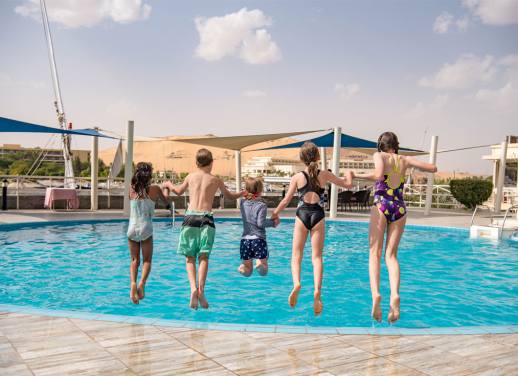 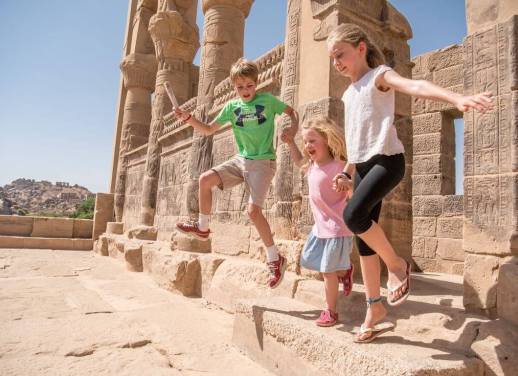 Travelling the world I was always that passenger that muttered under my breath and prayed like mad that the family with the toddler walking down the aisle of the plane was not going to sit next to me. We’ve all been that person when you don’t have a little person of your own. I am now that person walking with my child to our seats as we jet off around the world to discover new things. While I miss the days of packing light and travelling on a whim, I relish the time spent with my new travelling companion and seeing the world through her eyes.