Home » I thought I was a solo adventurer for life. Then I went on a group trip…
Stories

I thought I was a solo adventurer for life. Then I went on a group trip… 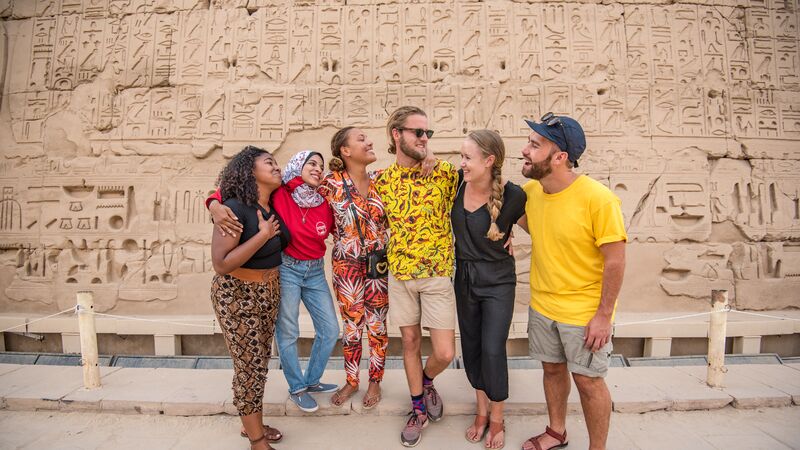 Ever since packing away all of the worldly possessions my 26 years of life had acquired into a humbling 5’ x 10’ storage unit on a December day in Denver, I thought I had travel figured out.

The spring before, I had taken a solo trip, my first, to Peru and the quick 10-day adventure had me absolutely hooked on the concept.

New connections had come with ease and often, spur-of-the-moment travel decisions were mine alone to make, and the person I had to be – fearless, outgoing, confident, adventurous – was someone I hadn’t met before in large doses. Solo travel brought me out of my shell in a way that nothing else did, so much so that I converted to this way of travel and never looked back.

That is, until a tempting group tour of Egypt entered the realm of possibilities. 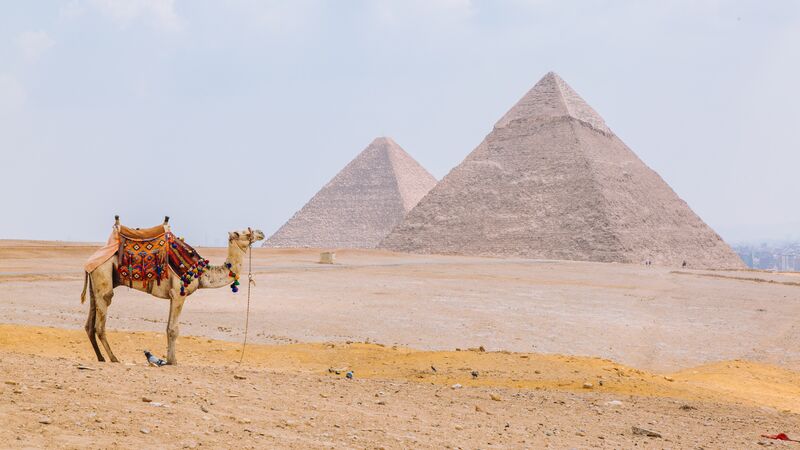 For two and a half years since that December day in Denver, loading a storage unit with things I should have sold long before I did, I’ve taken solo travel to the extreme, trading a predictable American life for an anything-but-predictable life in cities across Peru and Colombia. These days, my only constant companions are a large, lime green duffel bag, an overstuffed traveler’s backpack, and a well-stamped passport.

When Egypt taunted me with its desert scenes and visions of busy bazaars and crumbling pyramids, I was in the midst of settling in to my latest South American city of choice – Cartagena, Colombia. And though I knew every enticing word of the Essential Egypt trip description came with the strings of an ever-present group to experience it with and a need to stay on itinerary from start to finish, I found myself caring less and less about these strings as I realized Egypt had suddenly gone from a far off dream to a very real, near-term possibility.

READ MORE: WHY A GROUP TOUR IN THE MIDDLE EAST WAS THE RIGHT DECISION FOR ME 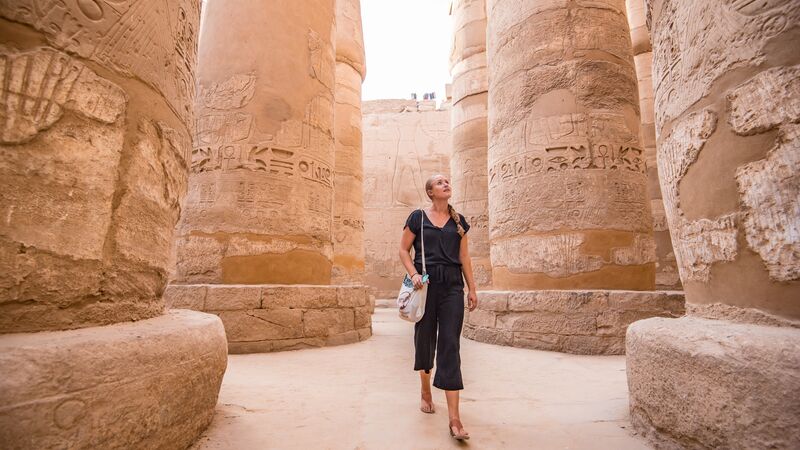 Usually I travel solo… but then I discovered Intrepid

Egypt was a place I’d always had on my travel bucket list, a place I’d always told myself I’d visit eventually. Though I’m not proud to reveal this, the thought of exploring it alone completely intimidated me. Besides the anxiety-inducing fact that I didn’t speak a lick of Arabic, the thought that I’d be a female traveling solo in a country so different from anywhere I’d visited before weighed heavily on me.

While I never imagined I’d eventually travel Egypt on a guided group tour, it quickly started to feel like the most logical way to do it. The travelers in my group would be roughly my own age, our guide would be a local Egyptian, and the activities that filled the itinerary were everything I would have wanted to see and do on my own anyway. 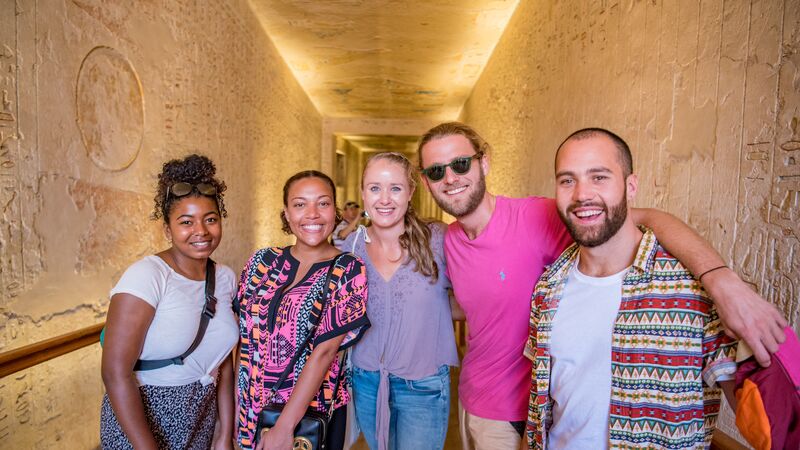 Though I certainly still had my reservations about giving up the freedom that comes with traveling on your own, I was definitely reassured by the fact that any challenge that would and could crop up would be dealt with together as a group, not on my own with zero Arabic.

Touching down in Cairo was my first taste of what I consider to be the guilty pleasures of traveling on an organized tour. Waiting for me just beyond security was a man holding a sign with my name on it. In my red eye-induced stupor, I fell into my role as passenger faster than my independent self would care to admit. I allowed him to guide me through the process of getting a visa, going through customs, and locating baggage claim. It was refreshing to be taken care of on the other end of a long flight to a foreign land in which I knew no one. I wasn’t used to that.

BROWSE ALL INTREPID 18 TO 29S ADVENTURES 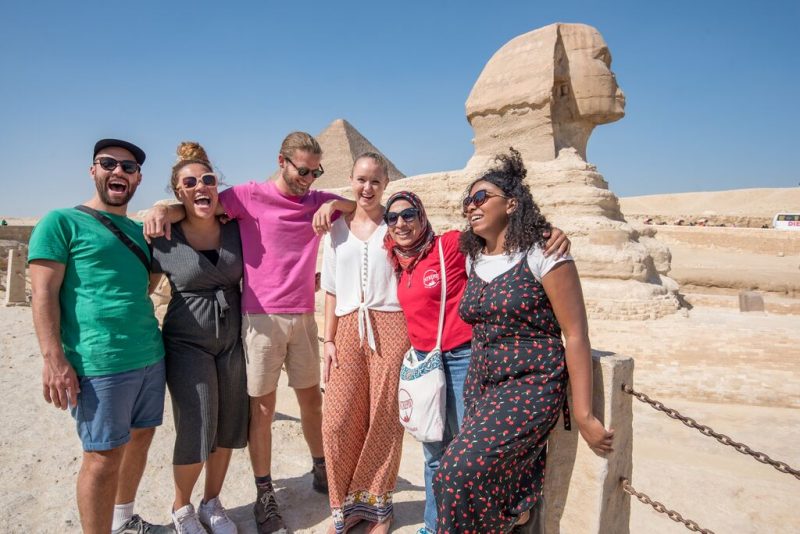 At the hotel, I met a few of my travel companions while the rest trickled in throughout the afternoon. The conversations mimicked those I’d had countless times before in hostels all over South America. It was a welcome relief to know I actually liked the people I’d be glued to for the remainder of the week. They were just like me in the sense that they lived for travel and knowing new places intimately.

We all seemed to be pulled to this particular trip for many of the same reasons – the comfort of a group in an otherwise daunting destination, the chance to visit a place high on our travel lists, and the itinerary’s promise of both on- and off-the-beaten-path experiences. 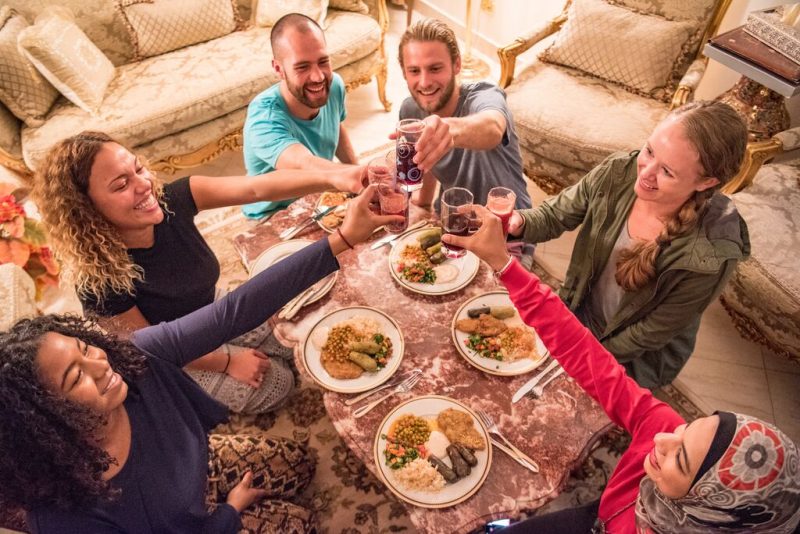 For a week, our local guide, Hend, led us from north to south to north again, becoming more of a friend than simply just a tour guide. Her depth of knowledge about the places we visited combined with her insider expertise to the best local spots to grab a falafel sandwich or shop for papyrus scrolls had me wondering why I had ever written off traveling on a guided tour. I had insight and access to the local culture and customs in ways traveling on your own just doesn’t give you very easily.

This was never more apparent than when we hopped off the overnight train in Aswan. Hend walked us through the next 72 hours with a glint her eye. It was as if she already knew exactly what would unfold in this southern Egyptian city. Looking back, what made Aswan so special wasn’t as much the sights (though those were incredible), but the way it brought our little travel group closer. I thank Hend for that. 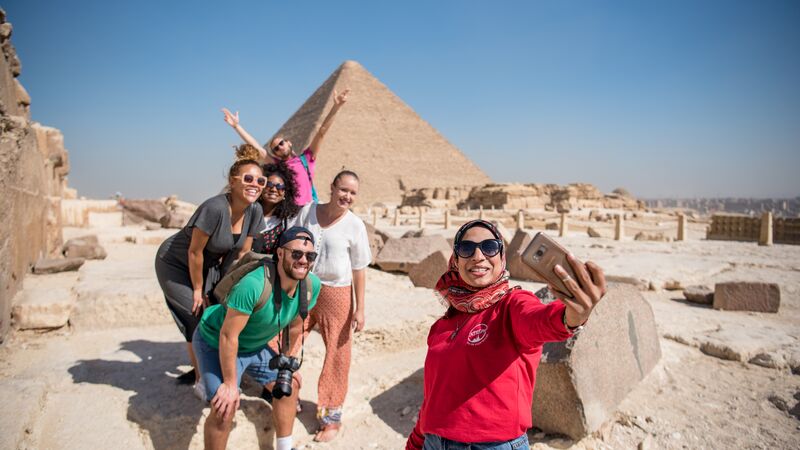 That glint in her eye, however, could have never predicted what came to pass – from an impromptu night of dancing to drumbeats on Elephantine Island to the headache-inducing marathon of riddles Sam plagued us with as we sailed down the Nile or the moment Mia and Georgia felt inspired to try on the belly dancing garb in the Aswan bazaar to give us all a hilarious show.

They showed me that traveling on a guided tour with a group of people my own age not only leads to moments I otherwise would have never had in Egypt, but it allows for lasting connections to form as you travel about the country together, bonding even more with each passing day. 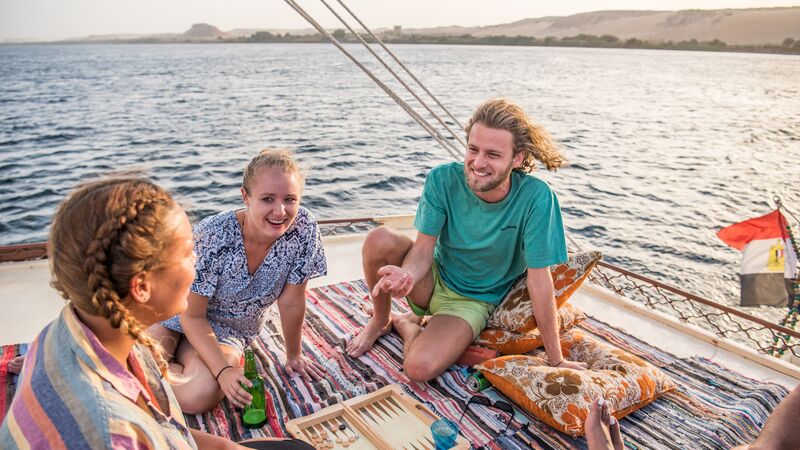 Bonding aboard a felucca on the Nile!

Before my trip to Egypt, I would have said guided group tours are like traveling with training wheels. As someone who is addicted to discovering the edges of my comfort zone, that just didn’t appeal to me at all.

Now, having tasted the reality of traveling on a guided group tour, I can say that it’s officially become another option for me, one that I’ll be trying again…and again and probably again.

Ready to explore Egypt like Amber did? Check out Intrepid’s Essential Egypt trip.

Looking for other 18-29s adventures? Browse them all.

Amber Dunlap is a digital nomad currently parked in South America, originally from Colorado USA. Between writing in coffee shops (or wherever the wifi proves functional), she’s happiest exploring new places, especially through the local cuisine. She’s traveled to 16 countries already and has no plans of stopping anytime soon. Follow her nomad lifestyle and adventures on Instagram @amber_dun.

I am taking an Egpyt guided tour early next month and am a bit nervous thinking about a solo travel or even about a group travel with random people. But thanks for describing your experience and lightening me up!

We really missed this tour. You enjoyed a lot.