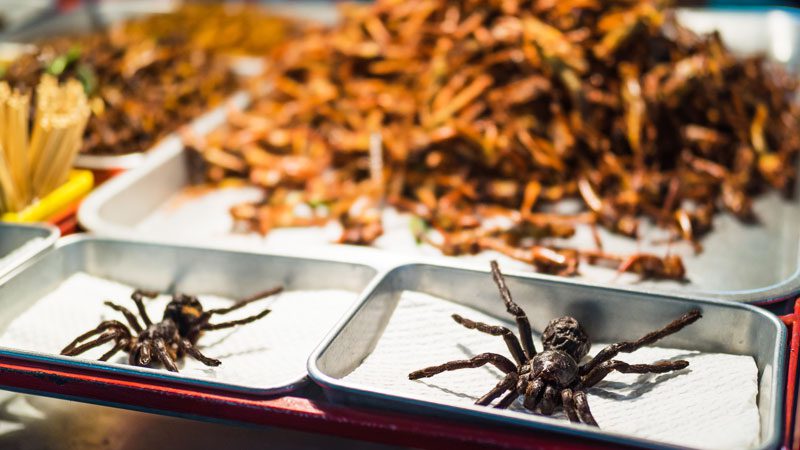 Should I eat spiders in Cambodia like Angelina Jolie?

The answer is no, probably not.

Over the past few days, Cambodian citizen Angelina Jolie ate spiders and an array of other insects and arachnids with her children to promote her new film. It worked, insofar as it received a slew of articles and the predictable outrage that comes with feeding your kids an uncommon thing on camera. Insects are a protein source for about a quarter of the world’s population. They’re sustainable and in most places where they are a staple, they’re eaten because they are tasty and not because of people’s desperate hunger. Unlike the humble cricket, spiders aren’t a common snack anywhere but have become associated with Cambodian (Khmer) food because of their media value. So, should you eat them?

They’re the epitome of tourist food

While the popular story is that spiders are a traditional foodstuff in Cambodia, there’s no evidence at all that they were popular or eaten as a snack until the rise of tourism in Cambodia in the mid-1990s. Spiders are available for tourists at most of the popular Cambodian markets, but the epicenter of the trade is the dusty roadside market in Skuon, about a hundred kilometres from Cambodia’s capital city of Phnom Penh.

The reason why the spider trade centred on Skuon is that it was a bus stop on the way from the capital Phnom Penh to the temples in Siem Reap, a novelty to amuse domestic and foreign tourists alike. The people who buy them are almost entirely from out of town. There was no spider trade before tourism, and without tourism, it wouldn’t exist as a roadside snack.

As with all good tourist food, they come packaged with a thin veneer of authenticity that is manufactured. There might be some credence in the idea that eating spiders came about due to the deprivations of the Khmer Rouge era, but as a rule, deep fried snacks tend not to be a byproduct of mass starvation.

They’re stuff white people like because they fit the colonial narrative of foreign people eating strange and unknowable food; and bold food adventurers seeking the novel and the obscure in every food culture they happen upon. When you focus on the novelty in food culture, you miss the depth and the joy of ordinary food.

RELATED: WHAT TO EXPECT AT A CAMBODIAN HOMESTAY

Probably not, but details are sketchy. Unlike many other insect proteins for sale on the streets of Cambodia, the spiders for sale aren’t commercially grown like silkworms or crickets, or pests like locusts. While the LA Times started the rumour that spiders were farmed (and a spider sanctuary existed in Skuon in 2011), there are no farms and there never was a sanctuary.

Spiders are caught in the wild. Spider hunters either dig out their nests or poke a gasoline-soaked rag on a stick into the hole to chase them out. In the mid-1990s, spiders mainly came from the forests around Skuon, but as these were cleared through the following decade and the highway system improved, the spider hunting trade moved further afield into the more densely wooded Prey Lang forest in Preah Vihear and neighbouring Kampong Thom province. Cambodia’s tarantulas are not yet an endangered species, but nor are they a well-managed resource. The current scientific consensus around their sustainability is a reassuring “who knows?”.

You’re missing an opportunity to eat something truly delicious

Ever wanted to eat something that tastes like oily, garlic-coated balsa wood that surrounds a squishy bitter abdomen? Imagine the world’s worst macaron had legs. It might look heroic on Instagram but it tastes awful.

On the upside, eating spiders won’t kill you. According to the vendors that I spoke with, the animals that you see in trays at a Cambodian market have generally been heavily fried in the days (or weeks) before and are given a quick reheat in oil to knock the roadside dust and congealed oil off.

In the same places that sell spiders, there are hundreds of other Cambodian roadside foods that you could be eating: from a simple grilled banana to bamboo tubes of kralan, slow-smoked sticky rice with black beans that picks up some of the earthy char from the wood fire. Every roadside stop has a steamer nestled with white clouds of num pao, sticky buns filled with minced pork, sausage and a halved boiled egg and a cooler filled with mystery roadside beer. Eating a spider is a lost opportunity to eat something delicious, fresh or alcoholic.

Want to try real Cambodian food? It doesn’t get any more authentic than our Real Food Adventure – Cambodia.

Phil Lees grew up in rural Victoria, the first generation in his family to not have lived on the farm and thereby not slaughter their own meat. Most of the time. In 2005 he moved to Cambodia and started the nation’s first food blog, Phnomenon.com, named after the best pun that he has ever made. It turns out that Cambodian food is delicious and unlike the warnings in most guidebooks, is not likely to kill you with any immediacy. Gridskipper called him a “national treasure”. Lonely Planet’s Greater Mekong guide called him “the unofficial pimp of Cambodian cuisine”. The New York Times once laughed at a funny hotdog he saw.

Taste great. I live in China for 5 years and I’m used to eat everything. It’s just social and cultural conditioning U got which lets u feel that some food is ugly and nasty and some is not.. How abt shrimps? Aren’t they also a bit “ugly”? Spiders r the same proteins u eat every day just in different form… Same with bugs grasshoppers and so on. They r all very tasty and perfect snack for a beer when u forget for a moment what u it and just concentrate on taste…

I’m not open-minded enough for something like this . I just don’t have the stomach for it. I tried once and I puked my guts out. I’m never going to try it again. Ever!

I tried a leg of a tarantula which was OK but sooty; then I bit into the abdomen and chewed my way through a mouthful of soot. I don’t know about squishy or deep frying, but this specimen had been well and truly burnt.

Spider eating in Kampuchea (Cambodia) is an experience that is for sure, I pulled the abdomen off as our guide graciously told me before I ate it that it was squishy and horrible but the rest of the spider was rather tasty but I would not like to try one without the herbs and spices somehow I do not think they would taste that great 😀