Make your way to the Mediterranean to discover Sicily’s natural, cultural and historical treasures

Explore Sicily and unearth the natural and historical wonders of this intriguing island, placed perfectly in the heart of the Mediterranean. Join a local leader on a fully immersive, 10-day journey. With a sprinkling of Arab, Norman, Greek and Roman touches, this region is a hive of history and culture. Expect incredible mosaics, towering palaces, crumbling ruins and marble-lined laneways to explore in the cities. Then, head out of the main hubs to discover the incredible Mount Etna – Europe’s largest active volcano. It's time to bring to light Sicily’s scenic, culinary and historical wonders on this Premium adventure.

Our best accommodation and highest level of service.

Led by our most experienced and highest rated local leaders. 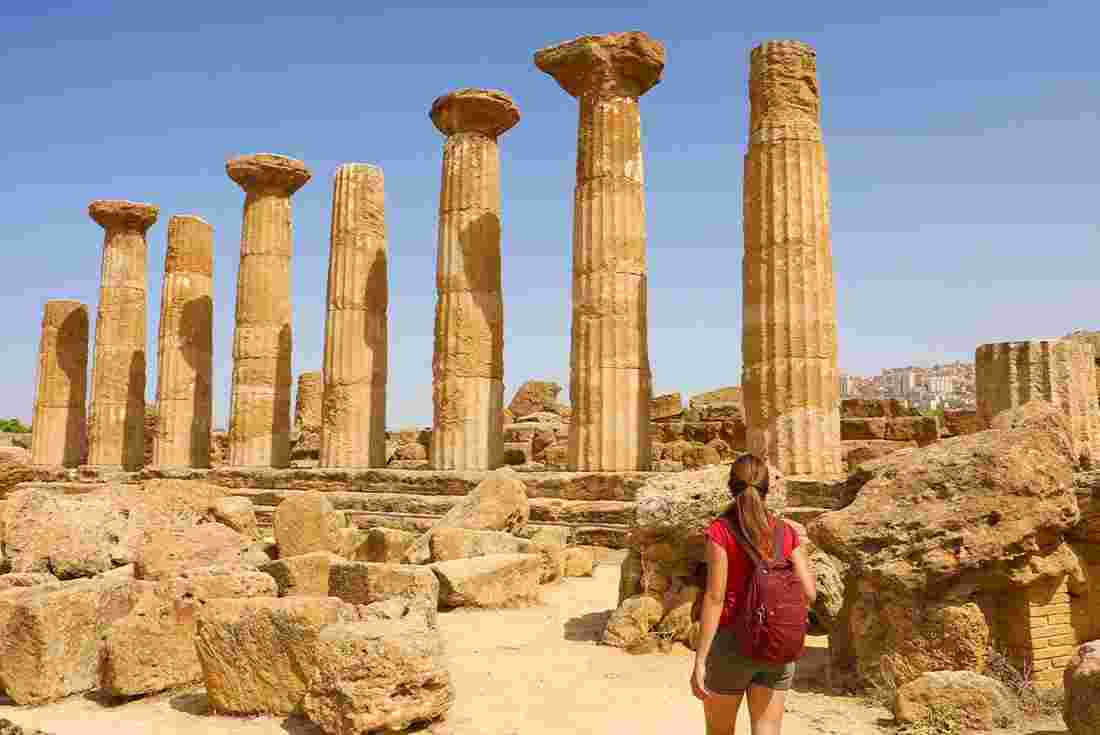 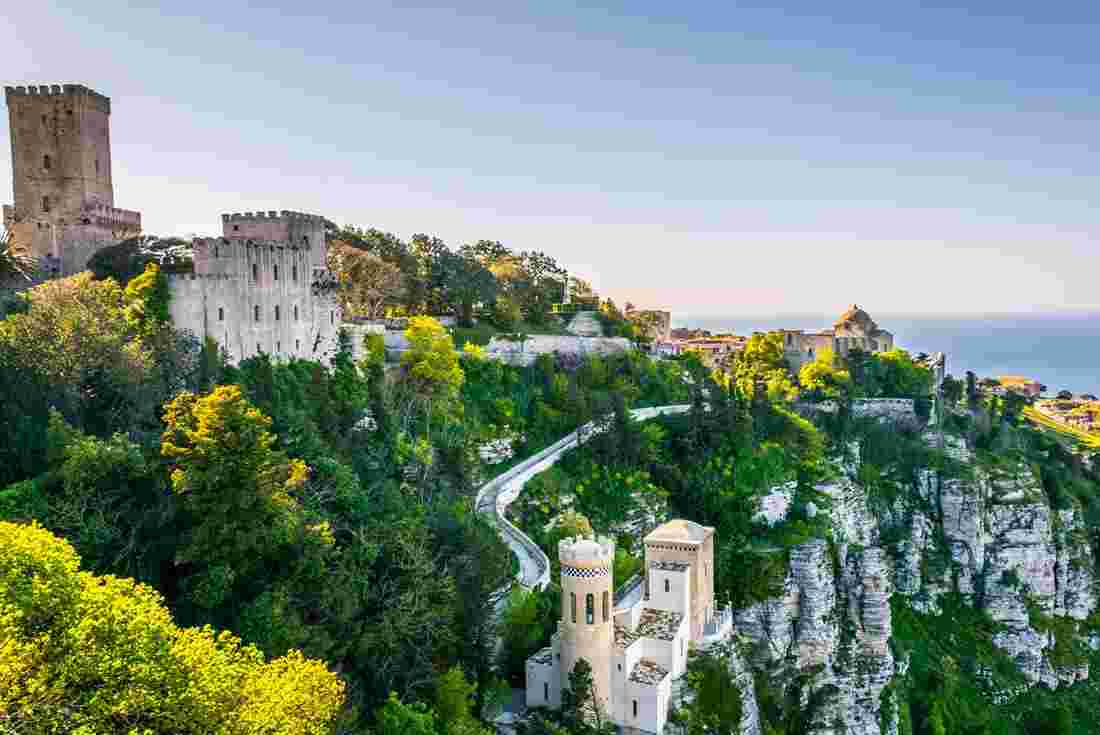 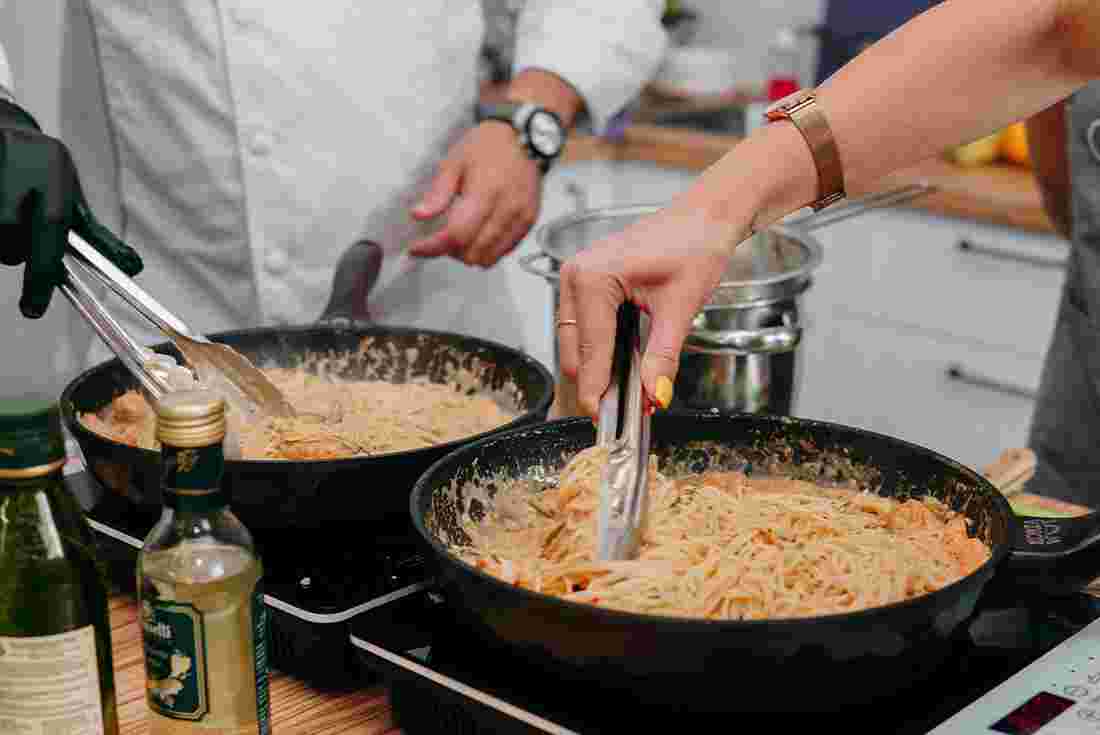 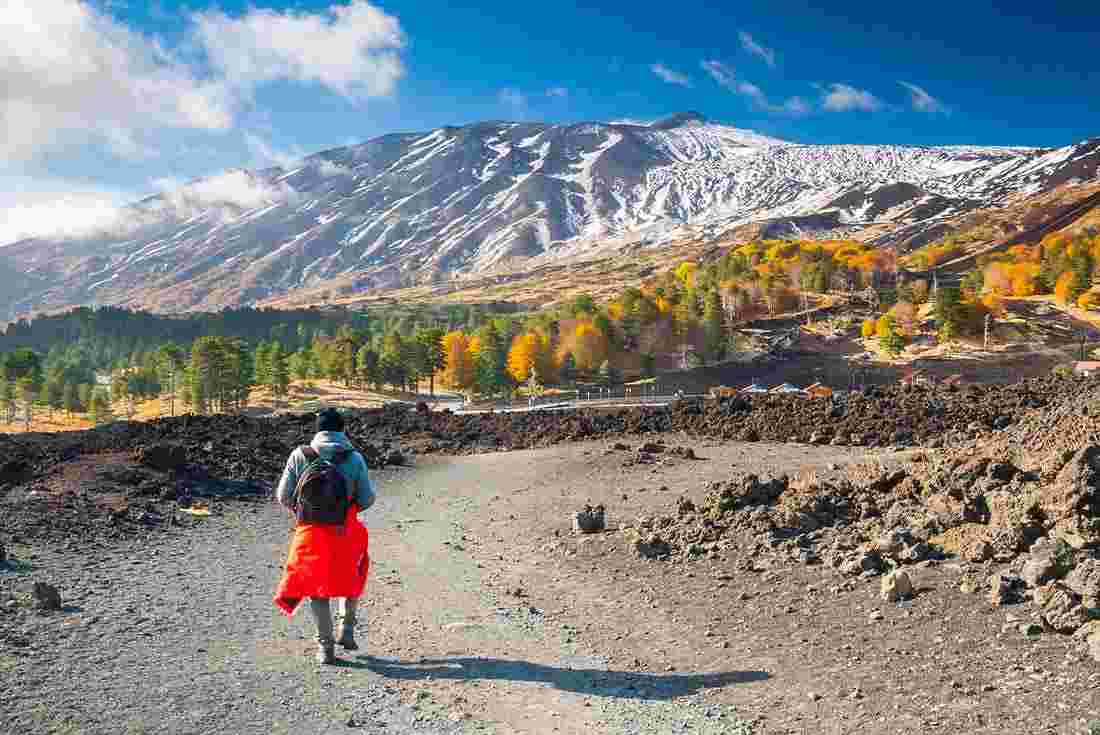 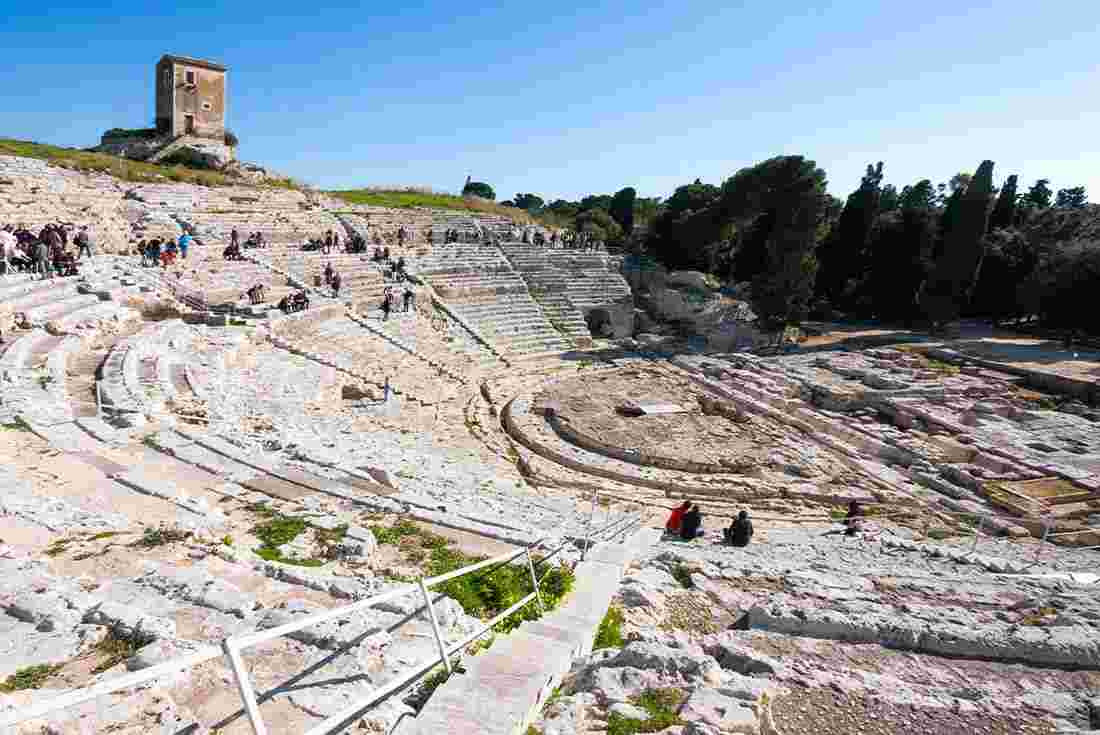 Welcome to Sicily, we’re kicking things off in the region's capital – Palermo. Upon arrival, a complimentary airport transfer will take you into the city. This evening we have our first dinner together and a welcome meeting with your local guide and fellow travellers. But until then, the city is yours to explore. If you have time, you might like to get acquainted with the sights and sounds of the old heart of Palermo, and gaze upon some of the main monuments such as the uniquely styled cathedral. Or maybe you’ll choose to café-hop and try the best of Sicily’s sweets. Whatever your fancy, there’s plenty to keep you busy in Palermo.

Sicily's unique cuisine sees Spanish, Greek and Arab influences and combined with a gentle climate and fertile soil, it is known all over the world. Delve deeper into this all important part of culture during a hands on cooking class. Not only will get to know the recipes, you will be learning how to create Sicilian dishes with the help of a local chef. As locally sourced products are used in the preparation of dishes, the menu may differ depending on seasonality and market availability, but your resulting lunch will be a treat.

This afternoon, join a walking tour with your local guide and uncover symbolic places of rebellion and anti-mafia racketeering. Places such as the Teatro Massimo, Cape Market, Piazza della Memoria, Beati Paoli Square and more, all have a rich history in civil mobilisation. Plus, these areas serve up some mouth-watering street food. You’ll personally meet local shop owners who have had the courage to denounce their extortionists and follow the ethical consumer campaign ‘Pago chi non paga’, a campaign promoted to support those that rebel against the Mafia.

Today it is time to say goodbye to beautiful Palermo as we head toward the small town of Erice. Located more than 750 meters above sea level, this beautifully preserved medieval town hosts, despite being handed from one ruling army to the next, many beautiful buildings showcasing architectural styles from its varied history. One thing that cannot be missed during your visit is Genovesi – traditional Sicilian pastries filled with custard or ricotta cream. Luckily for you, we’ve organised a special Genovesi tasting. After our visit to Erice we continue south towards Marsala, a lovely coastal town where we’ll stay tonight. Famous for its sweet dessert wines, you might choose to go out and enjoy a sip, or two, of Marsala’s delicious drinks with newfound friends or simply stroll the marble paved streets and explore at your leisure.

This morning head east as you stop in the old port of Mazara del Vallo. It is here that some of the Arab influences in Sicily are most clearly visible. As you stroll through the kasbah (Arab Quarter) you will witness the artistic and cultural enrichment brought on by the arrival of Tunisian families in the 70's. Wander the winding lanes and alleyways swept with colourful murals. Then, we’ll continue to Agrigento with one final stop in our journey at Scala dei Turchi (Stair of the Turks) along the way. Scala dei Turchi is a truly spectacular coastline with white marble cliffs that offered protection from severe winds for the pirates that roamed these waters. Finally, we make our way to Agrigento where we’ll stay in a magical boutique hotel built in the 13th century. Tonight you will share a meal with your fellow travellers at your here.

This morning, after breakfast, travel to the nearby Valley of the Temples. One of the largest archaeological sites in the world, it is situated where the ancient city of Akragas once stood. Your local guide will bring this classical Greek site to life as you visit the temples of Hera, Herakles, Zeus and Castor and Pollux. Along the way, enjoy magnificent views of the landscape and Mediterranean Sea. Return to Agrigento and enjoy the afternoon in any way you wish. Perhaps, head to Agrigento's old town to wander the narrow alleyways and courtyards or find a local café, grab a panino, sit and watch the world go by.

Today, we kiss Agrigento goodbye and hit the road en route to Siracusa – but not without a few important stops along the way. The first stop today in Ragusa will not disappoint – it’s one of the most scenic towns in all of Sicily. Explore the town and then taste some of the locally produced Ragusano cheese. Afterwards, continue to architecturally fascinating Modica, particularly famous for its chocolate, it is a must-stop for any serious foodie. After tasting some of the local produce we continue to Noto and get acquainted with the city on a guided walking tour. Lesser-known Noto has recently gained a reputation as an architectural jewel, its limestone structures dazzle on a sunlit afternoon. Finally, we make our last stop of the day in Siracusa, where we will stay for the next two nights.

This morning, enjoy an orientation walk through Ortigia – a small island just adjacent to the main town of Siracusa. Wandering the narrow streets and laneways will reveal ancient ruins, stunning fountains and authentic trattorias, all situated on the medieval island. In the afternoon head to the Neapolis Archaeological Site – known as one of the world’s finest – with your local guide by your side. Uncover the crumbling ruins of the ancient Greek and Roman town; from the Greek theatre to the Roman amphitheatre and ancient stone quarries. Covering an area of 35 hectares, there’s plenty of land to explore and plenty of history to learn about on this guided tour.

Today, come face-to-face with Europe’s largest active volcano on a daytrip up Mt Etna. Drive up the northern flank of the volcano and embark on an easy walk through the spectacular Valle del Bove (Bull Valley), a valley formed when the original crater of Etna collapsed. At an altitude of approximately 2,000 metres, walk into the centre of an extinct crater and visit a lava cave that can be explored with helmets and torches. Walk among the cold lava streams of Piano Provenzana, a former ski resort that has been destroyed during the last big eruption of 2002. After exploring the fiery natural wonder, continue to the atmospheric city of Catania. The city has a unique energy to it, an interesting blend of young and old. On one hand, there’s a gritty, attractive bar culture that fuels an exuberant nightlife, full of flavour and laughter. On the other hand, the very core of the city boasts one of the fabled “Late Baroque” towns – the UNESCO World Heritage site, Val di Noto. This afternoon, you’ll get the opportunity to explore both sides of this curious city by wandering through its grand piazzas and wide roads.

After breakfast today, take a day trip to the charming city of Taormina. Start things off with a guided walk, where you’ll notice Greek influence in the architecture. Walk through the back streets, gardens, and visit the world-famous Greek theatre and the cathedral. The afternoon will be at your leisure, so there's plenty of time to explore at your own pace. Have a drink in the Mediterranean sun or dig into some traditional Sicilian pasta before heading back for our final night in Catania. This evening, enjoy a farewell dinner at a local restaurant with your newfound travel friends and group leader.

Our Sicilian adventure comes to an end this morning after breakfast. If you’d like to stay on in Catania we can arrange additional accommodation on request (subject to availability).

There are currently no scheduled departures on our Premium Sicily trip. If you are interested in other trips in the region visit one of the links below.

Spend 17 days exploring all of Italy from Palermo to Mount Etna, to Rome and Venice...

Premium Sicily and Italy in Depth

Spend 24 days exploring Italy in depth from Sicily to Puglia and on to Tuscany - you'll...

Explore the best of Sicily and southern Italy - including Palermo, Mount Etna, Pompeii...

1. A complimentary airport arrival transfer is included; valid if you are arriving on Day 1 or if you have booked pre-tour accommodation through us. You must provide your flight details to your booking agent at least 14 days prior to travel.
2. A single supplement is available if you’d prefer not to share a room on this trip. The single supplement applies to all nights of your trip and is subject to availability. Please speak to your booking agent for further information.