Dig beneath the surface of history with this in-depth tour of mainland Greece.

Get lost in colourful cities filled with natural and ancient treasures on this whirlwind tour of mainland Greece. See where democracy began and how life was lived when Zeus called all the shots. Explore ancient ruins and rituals of the past. Unwind in the evening after a big day with a sip of ouzo over a banquet of culinary treats. Yamas! 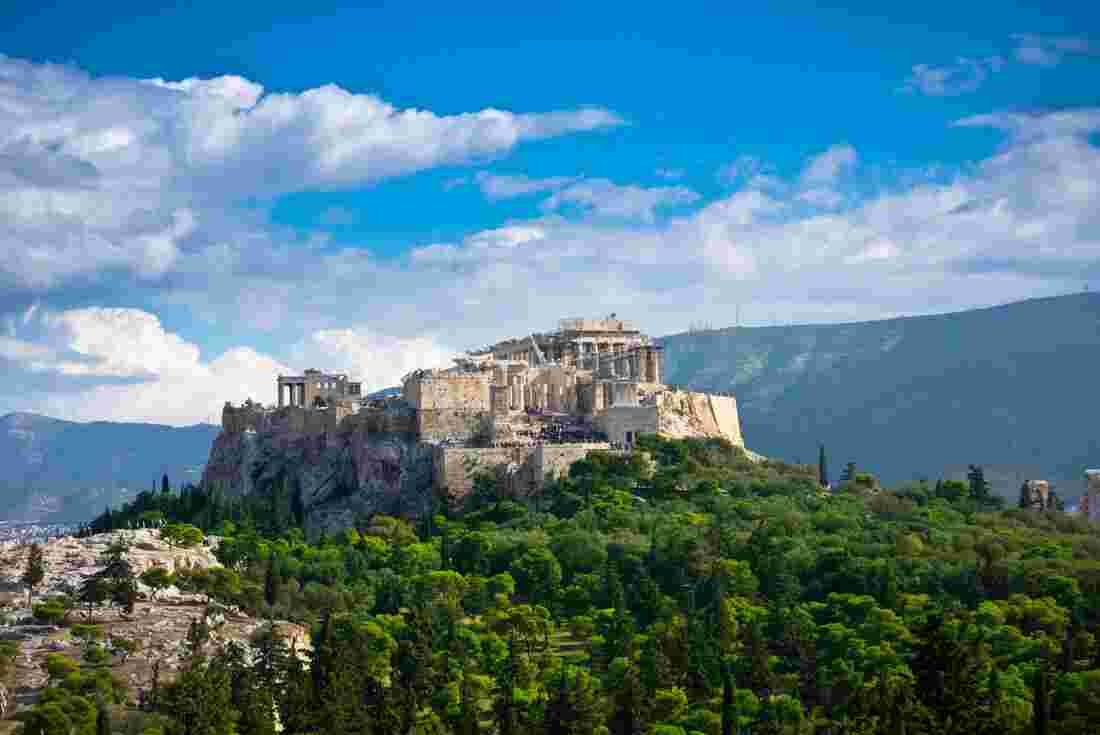 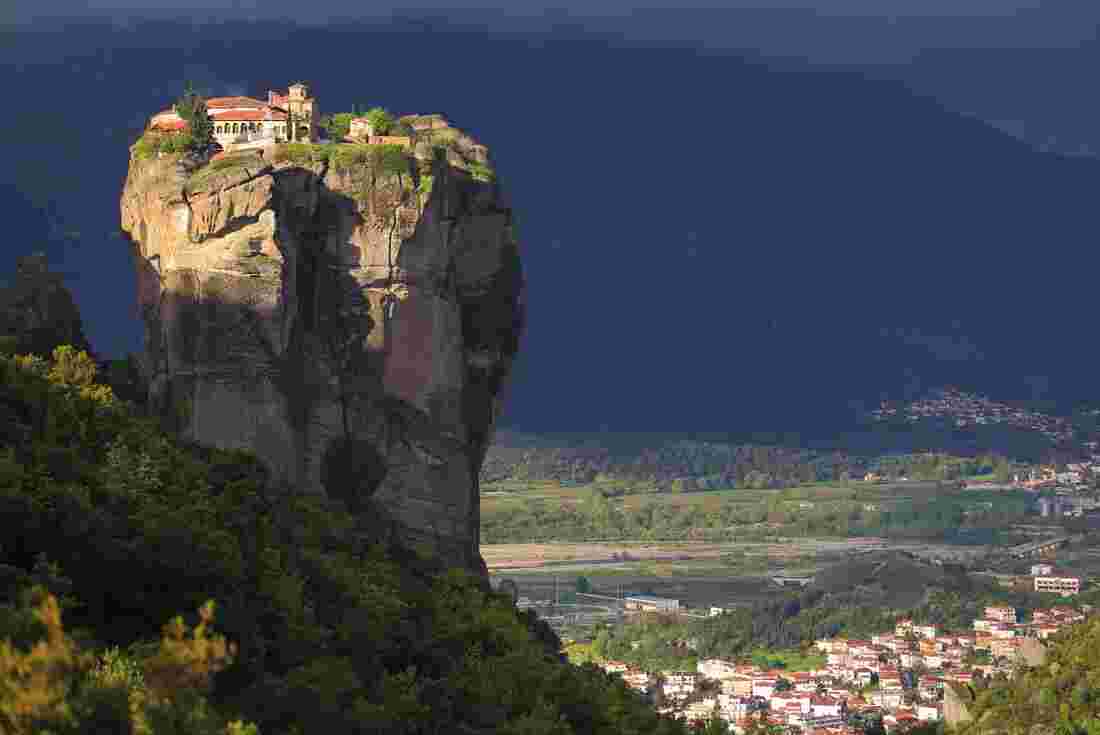 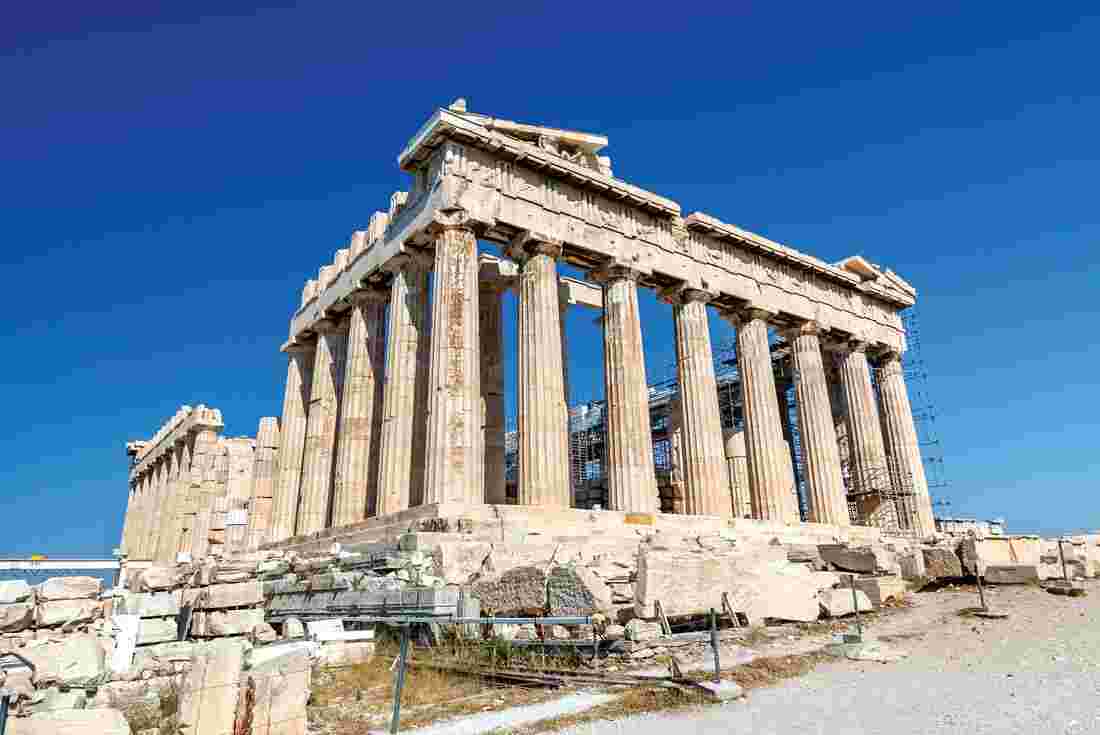 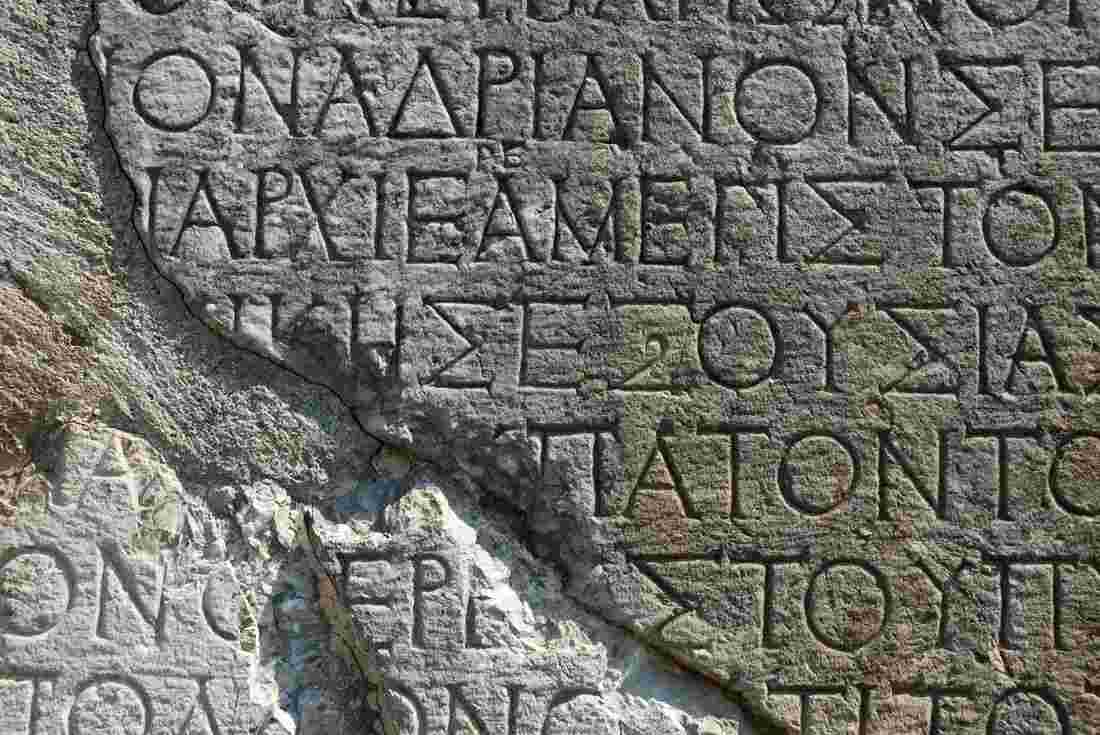 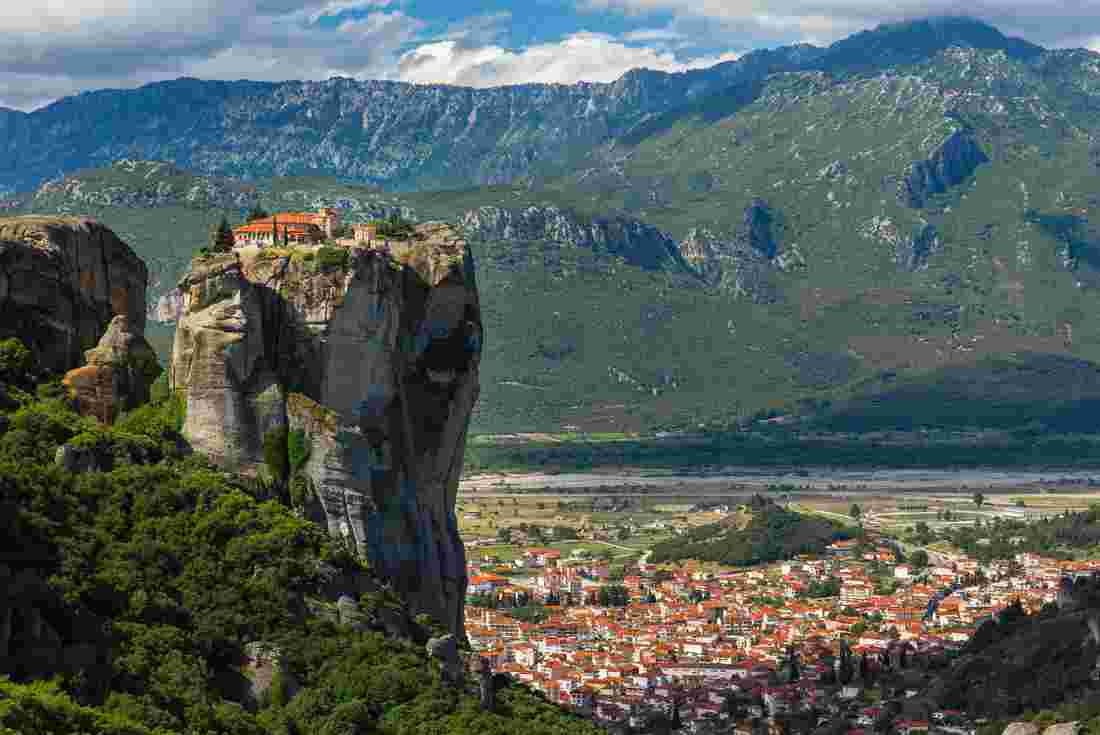 Kalimera! Welcome to Greece. Named after the goddess of wisdom, the birthplace of Western civilisation, Athens has an amazing array of historic sites to explore; a weighty history that spills out over the modern city, represented most dramatically by the ancient Acropolis. There's much to be seen in the ancient capital of Greece, vibrant and refreshed following the 2004 Olympics, yet still retaining so much visible history. After the welcome meeting, perhaps head out for some gyros and ouzo with your new travel companions.

Your adventure begins with a welcome meeting at 6pm today – confirm the time and place with reception. If you can't arrange a flight that will arrive in time, you may wish to arrive a day early. We'll be happy to book additional accommodation for you (subject to availability). If you're going to be late, please inform the hotel reception. We'll be collecting your insurance details and next of kin information at this meeting, so please have these on hand.

This morning head out to visit the famous Acropolis, one of the Western world's most important historical structures. Start with an ascent to the top of this sacred rock via the towering entrance, the Propylaia. Once inside, encounter the Parthenon – the greatest Doric temple in the ancient world. In the afternoon board a train to cosmopolitan Thessaloniki, the second largest city in Greece. This city especially comes alive in the evening, thanks in part to its large student population, so make sure you hunt down the perfect gyros or some live music.

Relax in the splendour of what is regarded as the cultural capital of the country. Walk along the waterfront to the White Tower, take in the Byzantine churches (like the beautifully frescoed Church of Saint Nicholas the Orphan), Ottoman sites and Roman ruins, and appreciate the wonderful views over the gulf. On a clear day you might even catch a glimpse of the home of the gods, Mount Olympus. If you’d like someone to show you the way, perhaps join an Urban Adventure for a local view. The city is undoubtedly the gastronomic capital of the Greece and its flavours are unique. For 2,000 years it’s been a melting pot of cultures, with eastern spices, French, Balkan and Mediterranean tastes. Seek out the eateries in the area around the agora, where age-old columns and arches brush up against modern apartments and the ancient Rotunda.

Travel by public bus or train to Kalambaka (approximately 3 hours). Upon arrival embark on on a short orientation walk of town, where your leader will point out amenities and help you get your bearings. The rest of the afternoon is free for you to explore the scenic area around Kalambaka and Meteora, where the views are stunning whichever way you look. Having two days here allows you to explore at your own pace, discover the history and legends, witness the incredible views of one of the few World Heritage sites listed under both nature and art at different times of the day, and avoid the crowds. Your leader will have suggestions on hand. In the evening, maybe head to a taverna for dinner and stroll the main square for a taste of Thessalian life.

Climb into the heavens, just like monks have done for centuries, towards ancient monasteries precariously placed atop 400-metre-high rock formations. Meteora is home to 24 14th century monasteries that sit at the top of karst pinnacles, though only six are still occupied. They were once only accessed by rope ladders, but thankfully there are now steps. The cliff faces also feature caves where hermits lived an even simpler life than those in the teetering monasteries. The monasteries, which used to be supplied by rope and pulley systems, house woodcarvings, frescoes, paintings, and one even features the skulls of the first founders. You’ll enjoy some great views back over the town. The area makes for incredibly dramatic photos – multi-colour streaked rock, bright green forest, and the pale terracotta of the monastery roofs against the Grecian sky. The mists that can surround the pinnacles make the constructions seem like they’re floating in the air. Hawks drift on the valley thermals looking for prey, and black-frocked priests shuffle silently around.

A strict dress code applies when entering any of the monasteries. No bare shoulders or knees are permitted, and women must wear skirts. It is possible to borrow a long skirt at the door if you don't have one. Please also note that today will involve a fair bit of walking with many steep stairs, so it is recommended you wear comfortable shoes.

Travel by private transfer to Delphi (approximately 4 hours). Located on the slopes of Mt Parnassos, by a valley of cypress and olives trees, this modern town and ancient ruins overlooks the Gulf of Corinth. The ancient Greeks regarded Delphi as the centre of the world (legend says that Zeus sent two eagles flying from opposite ends of the world and they crossed paths over Delphi), and today it’s one of the country's most inspiring and memorable archaeological sites. On arrival, your leader will take you on an orientation walk of the cliffside town of Delphi. Then, make the most of your afternoon by visiting the ancient site of Delphi. Here you’ll find the famous sanctuaries of Apollo and Athena, which contain numerous monuments, temples, a well-preserved theatre, and the impressive reconstructed Athenian Treasury. The site was also home to the Delphic oracle, said to have spoken for Apollo himself – she sat on a chasm, inhaling vapours from the Earth and entering a trance-like state, her cryptic answers to questions translated by priests. There’s also a mountain-top stadium, which were used for the Pythian Games (an Olympic Games precursor), held every four years as early as 586 BC.

Travel back to Athens today by bus, arriving in the late afternoon (approximately 3,5 hours). Shop for the perfect souvenir at the Monastiraki flea market or take a relaxing stroll through the Greek national gardens. If you haven’t already, check out the Temple of Olympian Zeus or the Tomb of the Unknown Soldier to watch the changing of the guard. While in the neighbourhood explore the excellent Museum of Athens, Syntagma square with the Parliament building, and the Panathinaiko Stadium which housed the first Olympic games in 1896.

The trip finishes after breakfast and you are free to depart the hotel at any time. If you would like to stay in the Greek capital we are happy to book additional accommodation for you (subject to availability). Please speak to your travel agent at the time of booking.

If you haven't had enough of Greece yet why not join our connecting Greek Islands trip, taking in the best of the islands in the Aegean sea, such as Mykonos and Santorini. Most departure dates are designed to create this perfect combination trip. Or, if you have some extra time in Athens, you can take one of the day trips offered by Urban Adventures. Check out urbanadventures.com for more information.
Want to tailor this itinerary?

There are currently no scheduled departures on our Mainland Greece Discovery trip. If you are interested in other trips in the region visit one of the links below.

A comprehensive 15-day journey from Athens, Corinth and Delphi through to Syros,...

1. A single supplement is available if you’d prefer not to share a room on this trip. The single supplement applies to all nights of your trip and is subject to availability. Please note that due to the small properties we use in Europe there is only a limited amount of single supplements available per trip departure. If you would like to book a single supplement and enquire about availability, please speak to your booking agent for further information.
2. Please note that access to indoor areas of restaurants, leisure and sports facilities in Greece is allowed only after showing a vaccination certificate valid for 7 months after the completion of the basic vaccination and without time limit for those who have received the booster dose. We highly recommend you to receive booster shot to ensure a smooth travel experience in Greece as the regulations tend to change often with little notice.