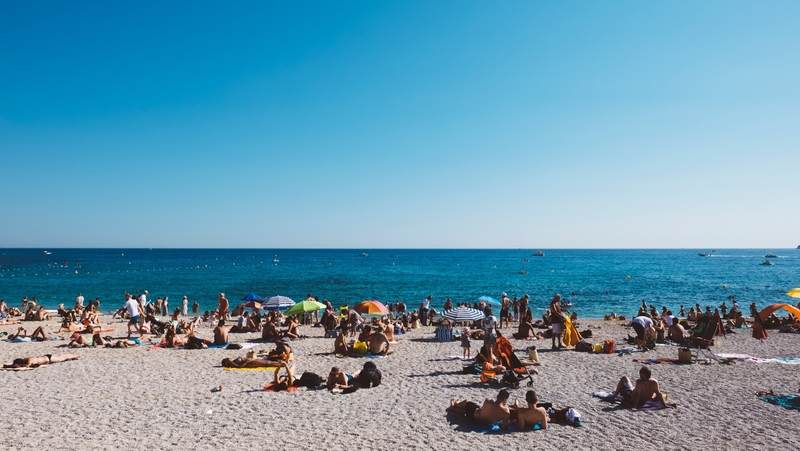 Sunshine, retro swimsuits, striped umbrellas. Aquamarine Mediterranean waters and similarly coloured cocktails. When this intrepid reporter set off for the French Riviera – on Intrepid’s Cote d’Azur Sailing Adventure from Marseille to Nice – it was with these romantic ideas in mind. Inspired by films like Alfred Hitchcock’s To Catch a Thief and F. Scott Fitzgerald’s Tender is the Night, my expectations were at Eiffel Tower heights before I even set foot in Marseille. And I was not disappointed.

Sailing for seven nights on a small yacht with only six other people on a trip to France – plus our charismatic skipper, Vincent – we were able to dock where our whims and the wind took us. This adventure isn’t like powering through the water on a cruise ship. It’s a slower, more sedate pace and as far off the tourist trail as you can get in the south of France. You will barter for dinner ingredients with the owners of local market stalls; visit beautiful islands with unspoilt beaches and national parks; and swim in water so still and clear you can see the patterns on the sand six metres below the boat. 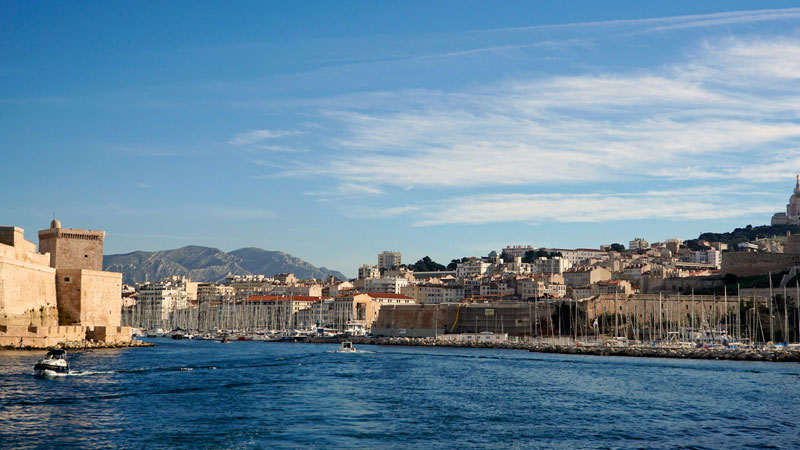 Our journey started in Marseille – a vibrant, multicultural port city – where the group met before driving to our yacht at Saint-Mandrier-sur-Me. One thing to be prepared for on the Cote d’Azur Sailing Adventure, is that it’s exactly that – an adventure. Some might call a yacht sleeping 7-9 people cramped; or you could just think of it as cosy. Everyone on the boat is expected to pitch in and help with cooking and keeping the shared areas tidy. There is no ‘tour leader’ – just your skipper, who will need some help around the boat. Don’t worry, you won’t be asked to sail through a storm; just to occasionally help out with winding ropes and throwing buoys over the side of the boat.

The locations you will see over the next seven days were stunning – but some of my most memorable moments occurred on the yacht. You will drink wine, play cards, and sleep in close quarters with your fellow travellers. You will spend hours sitting on the deck, soaking up the sunshine, as you cut a path through the Mediterranean sea. And each night you’ll feel the waves rocking you to sleep and hear le mistral – the strong, cold, north-westerly wind that blows from southern France – rushing by outside your cabin.

After leaving the sleepy seaside town of Saint-Mandrier-sur-Mer, we sailed towards the Iles d’Hyeres Archipelago – also called the Îles d’Or, or Islands of Gold. A combination of rocky shorelines and golden beaches, this is where French families holiday. We docked at Porquerolles, where the sands are as white as you might expect in Australia, and the air fragranced with Eucalyptus trees. The island was bought by the French state in 1971, which has protected it from overdevelopment and urbanisation. Coming to this island is enforced relaxation – there’s nothing to do except swim, cycle, sail and laze in the sun with a good book. So, it’s practically paradise.

On the evening that we docked at the island, it also just so happened to be the annual music and culture festival, Jazz à Porquerolles, which takes place over one week in July. If you ever have the opportunity to replicate this exact scenario, there’s nothing quite like tapas for dinner at the restaurant Le Pélagos, before climbing to the ruins of Fort Saint Agathe at sunset to watch the Oliver Lalauze 6tet and Otis Taylor perform. Not to be overly specific or anything. 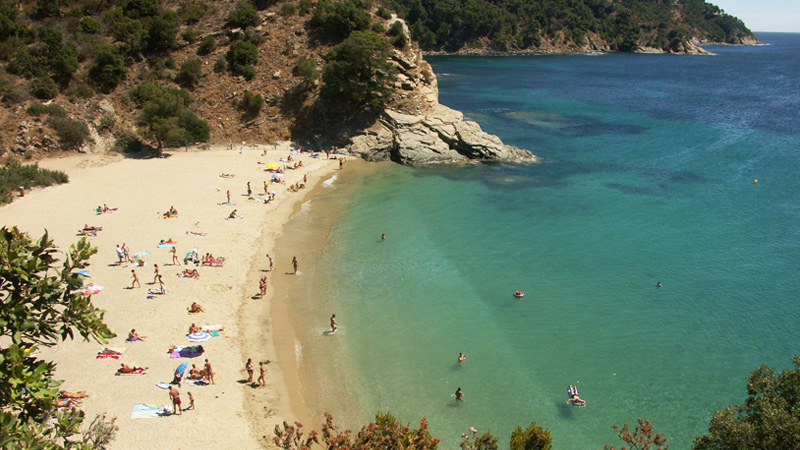 Our next seaside town was the old-timey Cavalaire-sur Mer. A decidedly un-snobby town along the French Riviera, Cavalaire-sur Mer is about as far from Saint Tropez as you can get in terms of atmosphere. The vibe is very family friendly, and the port is spotted with ice-cream stands, ferris wheels, and fairground rides pulsing with vibrant neon lights. Catch a free shuttle bus to the main beach, where you can go kayaking, canoeing, snorkelling and deep-sea diving.

You’ll be sleeping in the port at Cavalaire-sur Mer – so it’s sensible to do dinner somewhere nearby – like Le Comptoir des Saveurs, which has a fantastic view of the harbour and other docked yachts. After dinner, make sure you wander around the harbour and enjoy the family-friendly nightlife. There will be buskers performing, kids breakdancing, market stalls selling glow-in-the-dark jewellery, and cheap-as-chips churros (the Spanish fried dough is big here). 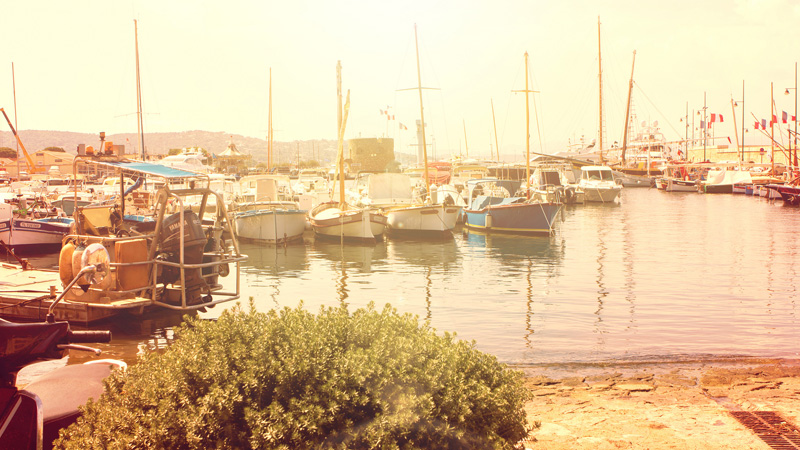 From the chilled Cavalaire-sur Mer, to the glitzy and glamorous Saint Tropez. For the next two days, our Intrepid group was docked in the port at Saint Maxime – where we stayed due to the ferocious le mistral. The picturesque town of Saint Maxime is known for its breathtaking views in every direction – and the ferry that travels to and from Saint Tropez every hour. During the peak season, the ferry runs 24/7, meaning that you can dock at the comparatively relaxed Saint Maxime while still enjoying the wild Saint Tropez nightlife.

In Saint Tropez you want to start by wandering around the port, admiring the yachts that belong to millionaires with more money than God. Leonardo Di Caprio probably owns five of them. Visit the café Sénéquier – famous for attracting Hollywood stars, directors and producers – and indulge in an overpriced espresso. Once you’re caffeinated, take a stroll through the winding, cobblestoned streets of the ‘old village’, past designer fashion and grocery stores, admiring the charming architecture. It’s then a short walk up to Saint Tropez’s 16th-centuey Citadel – which will add some worthy history to your day.

When the evening rolls around, you’ll probably want to glam up and head out for cocktails. A word to the wise: if you want to get inside any bar or club after 6pm in Saint Tropez, you must be appropriately dressed. And for women that means wearing heels. Otherwise, you might hypothetically be turned away from six different clubs, before finally being allowed into a hotel bar to dance the night away… But your flat shoes will then come in handy later, as you bolt through the old village for the 4am ferry. Hypothetically.

One last piece of very important advice: before you depart from Saint Tropez, make sure you try their signature pastry, a Tropezienne tart. Or try more than one. This is a city of excesses after all. 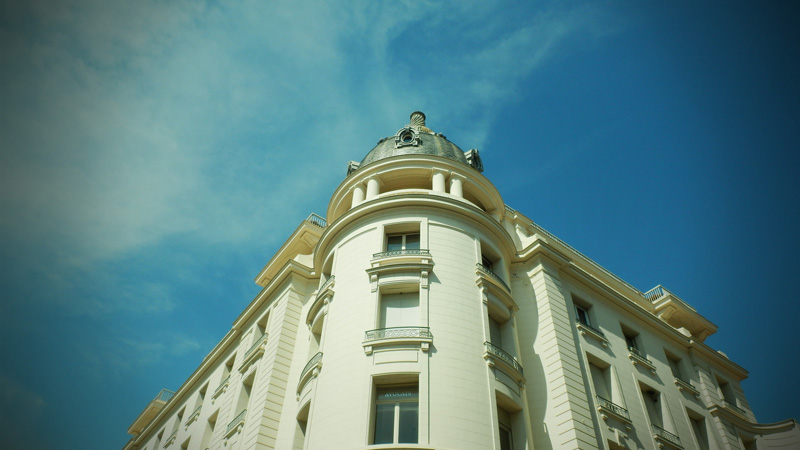 Cannes is famous for its international film festival, and many of the iconic sights are linked to the Hollywood history of the place. After docking in Cannes, go for a walk down the promenade, La Croisette, and soak up the sunshine while people watching. There are bronzed bodies and roller-skaters aplenty. As you walk, you’ll come across the Palais des Festivals, the Cannes festival hub, with stainless steel imprints of celebrity handprints at the Allée des Stars.

While near Cannes, your group is also likely to sail to Ile Saint Honorat, an island that still belongs to Cistercian monks, who tend to fields of lavender and the old St-Honorat monastery. You can walk around the circumference of this island in about an hour. While anchored in the harbour, you can wave over ice-cream tugboats – like an ice-cream van, but on the water – to your yacht and purchase an ice-cream. If your monetary situation is a bit better than those monks on the island (who have taken vows of poverty) then there are also oyster tugboats for a more sophisticated snack. 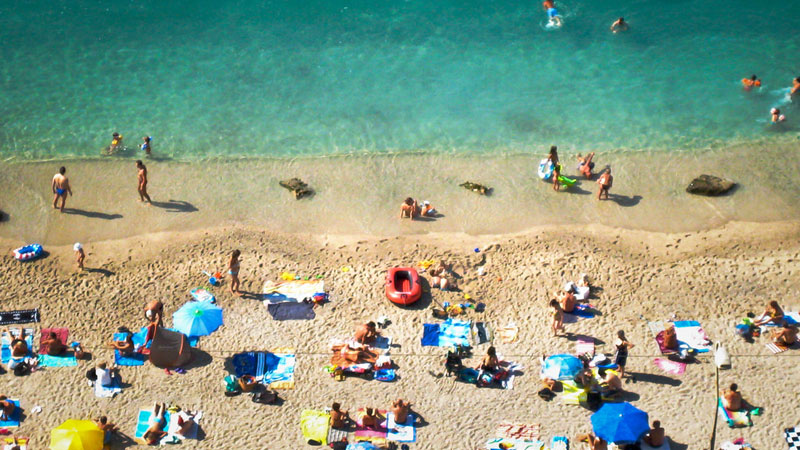 Our sailing adventure came to a close in Nice. Once you depart from the yacht, it’s worth booking a few extra nights in this beautiful city so that you have time to explore. The beaches in Nice are some of the most stunning along the Cote d’Azure, and perfectly fit the French Riviera stereotype with lounges and striped umbrellas available for rent. Entire afternoons can be spent strolling along the famous Promenade des Anglais.

I’ve focussed in this piece on the vibe of each seaside town you will visit, but the most fabulous thing about Intrepid’s sailing adventure is truly the time you have to relax on the yacht itself. While sailing between each location on the itinerary you will snooze in the sunshine, breathe in the crisp sea air, and lay on the deck reading a book. And then snooze some more. At the end of your eight days you will have never felt more relaxed.

My fondest memory from the sailing adventure isn’t of watching jazz on Porquerolles, or finally finding somewhere to dance on Saint Tropez – although these were certainly highlights. It is of eating a home cooked meal with my sailing companions as we docked one evening in Villefranche-sur-Mer, and watching the stunning sunset. It is of then falling asleep on the deck, under the stars; and waking up at dawn, covered in dew. It is of looking at the sea that sunrise, stretching out before me silvery and still and shining.

Want to sail the French Riviera in your own 50-ft yacht. We don’t blame you. Check out our small group tour for all the info.

Villefranche-sur-Mer is one of my favorites places on the French Riviera! Glad you have been there! Greetings from Nice 🙂 T.