Climbing the slopes of Mt Bromo 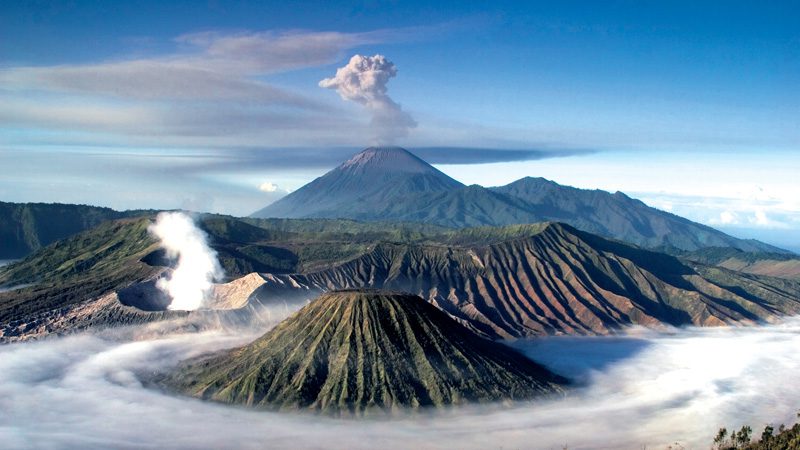 I’ve just reached what feels like a portal to Hell, and it really isn’t too scary. There’s no fire, no brimstones and no demons wielding pitchforks. And the heat isn’t all that bad either. It does smell though – that sulphurous rotten egg scent on the air. Disconcertingly, the portal isn’t very from home – just a nine-hour flight from Melbourne, followed by a three-hour drive through Javanese rice fields.

Where is this infernal place? I’m standing on top of Mount Bromo, an active volcano in East Java, Indonesia, looking down into its fiery caldera as plumes of thick smoke billow from deep inside the earth. For most travellers, Indonesia brings to mind images of surf, sand and tropical rainforests teeming with bio-diverse wildlife straight out of an Attenborough documentary. But as I look out over this barren, moon-like landscape – devoid of life, apart from a trickle of travellers, a handful of local guides and their horses – it strikes me that this is about as hellish as it gets in equatorial, jungle-clad Indonesia. 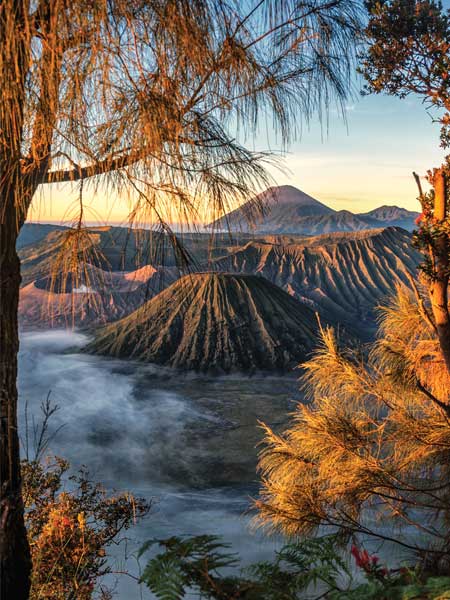 Rising, quite literally, from a sea of ashes in the 10-kilometre wide Tengger caldera (one of the most scenic and visited attractions in Indonesia and part of the Bromo Tengger Semeru National Park), Mount Bromo, at 2,392-metres above sea level, isn’t even Java’s highest peak; that title belongs to 3,676m tall Mount Semeru, which stands imposingly in the background, like a bouncer, frequently smoking and occasionally erupting in a blazing fury.

But what Mount Bromo lacks in stature it gains in notoriety and religious significance. The name Bromo derives from the Javanese pronunciation of Brahma, the Hindu creator god, a nod to the volcano’s raw, elemental power. As one of the most active volcanoes in Indonesia – not a trivial distinction in a country where eruptions occur as regularly as the seasons – Mount Bromo has been revered by the local Hindu villagers for hundreds of years. In an effort to keep the beast’s smouldering fury at bay, they make yearly pilgrimages to its smoky crater during the Yadnya Kasada festival (held in July or August) with offerings of fruit, rice and livestock; that’s assuming the volcano isn’t erupting and spewing volcanic ash kilometres into the sky, disrupting flights and covering nearby villages in layers of ash fall.

My journey to the Bromo Tengger Semeru National Park began at the hellish hour of 4:00am in the back of a navy blue Toyota Land Cruiser. Accompanied by a few friends, we drove the 60-minute journey from Malang in East Java (a highland city rich with Dutch colonial history) in the pre-dawn darkness in the hope of catching one of those fleeting picture-perfect postcard moments. I’d been told, like many others I’m sure, that the best views of the volcano were from atop the Mount Penanjakan lookout point – preferably at sunrise. Apparently, the morning sun’s warm light bathes the caldera in a kaleidoscope of purples and oranges, creating the kind of mythical scene that actually justifies a 4:00am wakeup call. “It’ll be worth it,” my Indonesian mates said.

Personally I wasn’t so sure. I’d been burned before with the promise of a glorious sunrise ascent (it just never lived up to expectations) and I was doubtful it’d be worth the pre-dawn wakeup call and the chilly conditions at high altitude. A hundred slippery steps later, after a 45-minute drive up to the lookout point in the inky darkness in the back of a jeep driven by a burly Indonesian, I find my reservations justified. Instead of that postcard moment, I’m presented with a wall of thick grey cloud, stubbornly guarding the view I’d trudged so far to see. I’d been burned again. 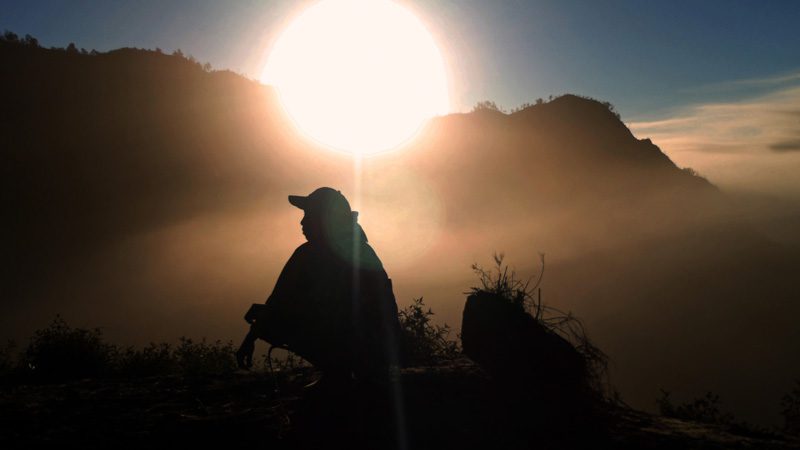 Disappointed and anxious to move on, we descend the hundred slippery steps down Mount Penanjakan and back to our red jeep, idling in the dawn light and waiting to drive us to the caldera floor. But our disappointment doesn’t last long. Halfway down the mountain the morning clouds part, revealing the surreal Bromo Tengger Semeru National Park hidden all along. In front of me, volcanic smoke from Mount Bromo drifts eastward like low lying cloud, past crinkly-surfaced Mount Batok (the only inactive volcano in the fiery complex) against a palette of charcoals, browns, greens and blues – all arranged in perfect composition. It’s a scene I’d seen many times before, in photos online and in magazines; but still, I’m totally captivated. We pull over to the side of the road to take photos of ourselves against the otherworldly background.

Back in the jeep we make our final turn off the mountain road and hit the caldera floor with a thump. Instantly the landscape transforms from lush greens to barren greys, and the screeching of the tyres drops into a lower register, signalling we’ve just entered the sea of sands. In the distance, lone Indonesian cowboys zigzag across the black dunes on their horses (the caldera would be the perfect location for a Western movie set on the moon), whilst up ahead a procession of jeeps ­(of which we’re a part) shoot across the caldera floor towards Mount Brom, kicking up dust clouds in their wake.

After disembarking from our jeep at the edges of Pura Luhur Poten ­– a Hindu temple dedicated to the god of Bromo, and the focal point of the festivities during Yadnya Kasada – we’re immediately surrounded by gruff guides keen on taking us across the sands on horseback to the beginning of the 253 steps leading up to the crater’s edge. My Indonesian friends haggle, and haggle some more, and soon we’re off like cowboys and cowgirls to meet our fate, all for a reasonable sum of IDR100,000 (around $10). 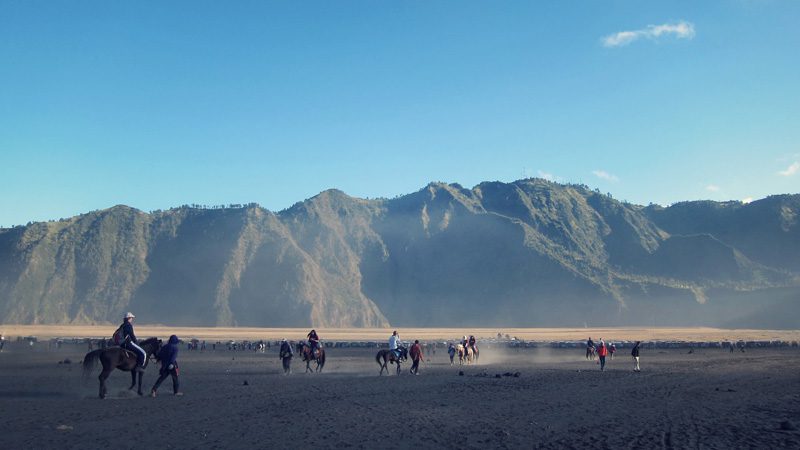 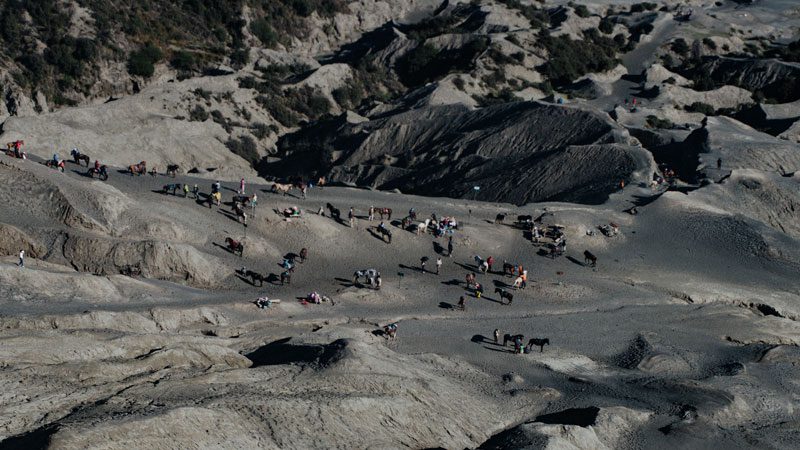 We trot over the rolling black dunes until we reach the steps leading up to the top of Mount Bromo. I throw a few smiles at fellow climbers as I pass them on the way up, trying to distract myself from my burning thighs as I ascend one step at a time. The ground trembles when I finally reach the summit, and I share a high-five with my mates as we stand on the crater’s edge – triumphant, yes, but totally at the mercy of the volcano’s destructive temperament, liable to unleash its fury at any moment. I’m not a religious man, but as I stare into the smoking crater, I find myself praying, like the local villagers, that Mount Bromo is enjoying its quiet slumber.

Want to see Mt Bromo for yourself? Check out our Jakarta to Ubud small group adventure. 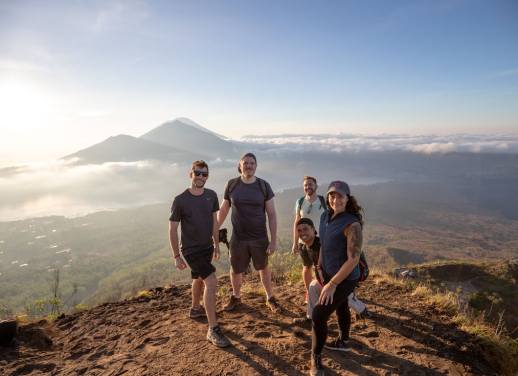 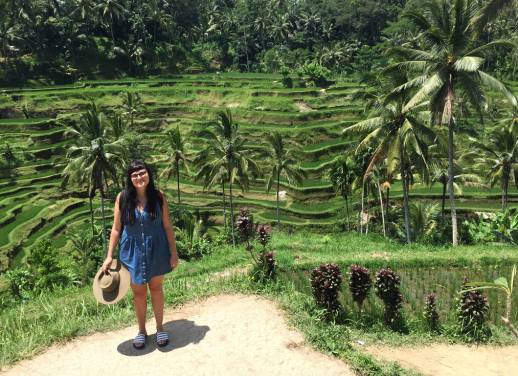 Mount Bromo is one of the natural attractions in Indonesia. This destination offers an interesting natural appearance, one of which is the view of the desert. It is estimated that the desert area in Bromo reaches 10 km. Unlike the deserts in other places, the desert in Bromo is black. Tourists can ride horses around the desert area. There are already many horse rentals there, so tourists just need to rent them and they can ride around on the horse.

Beautiful photos! What month did you visit? Is it worth it visiting during rainy season in early February?

Unique experience and highlight of our tour. Got up early (around 3 am) then transferred by jeep, followed by 45-minute hiking to the volcano crater. This is a place which looks something out of the world. Stunning.

the picture it was amazing its from king kong hill right and look taken picture about 6am after sunrise.

I haven’t been to that part of the world yet, but will certainly keep this in mind when I eventually visit! Thanks for your comments Rick Be.

“That view at sunrise trick”doesn’t entice me anymore.My best sunrise view was between the hills on Patros when I had slept on the beach.Didn’t hafta move,just open my eyes.

Totally Rick. Most of the time it’s simply not worth it! And then you also have the crowds to contend with…

Every village in the Himalayas was promoting this-Heaven forbid if you took the wrong trail-they were all outhouses.