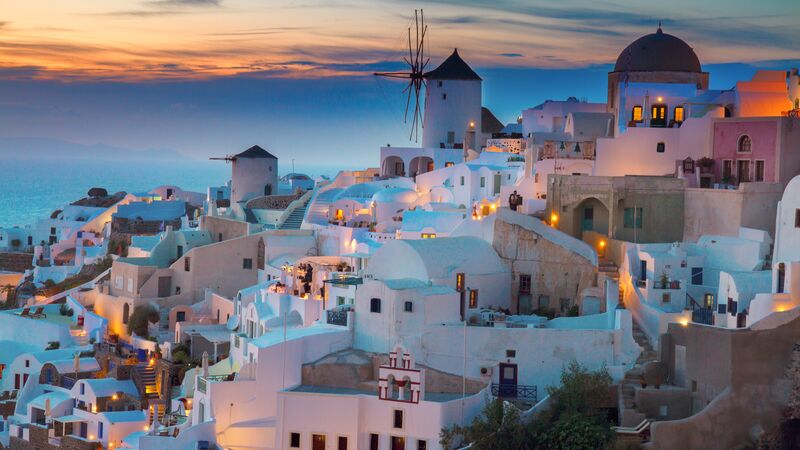 Greece. The crown jewel of the Mediterranean, where some of history’s greatest myths and mysteries reside among the beachcombers and night owls, the foodies and the backpackers. Turn any corner in arguably the world’s most historically important country – from Athens to Thessaloniki, Rhodes to Santorini – and you’re bound to find a story behind every archaeological ruin.

Better yet, odds are that you’re walking the same paths, trekking up the same mountains, and sailing into the same shores that some of the most renowned mythological legends have done so before you.

The Greek Islands are steeped in folklore dating back thousands of years, making the country a whole lot more than just pretty beaches and delicious food. History buffs are in for an extra special treat on Intrepid’s Greek Island sailing tours, because they get sunshine, beautiful beaches, traditional cuisine, sailing adventures, and world-famous nightlife on the same mythological grounds as history’s most fantastical legends! Island life is about to get a whole lot more interesting… 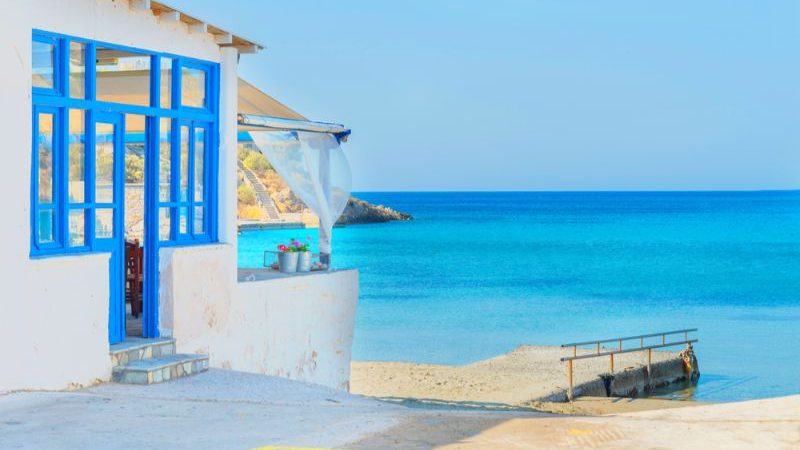 Syros is beautiful, with its boutique stores, vibrant pink and purple flowers adorning twisting alleys, and serene atmosphere making you wish that the days would never end. Legend has it that the island’s first king, Koiranos, was on board his ship when it sank somewhere between Naxos and Paros, leaving him treading water in the open sea before a dolphin came along and saved him, carrying him to a cave known today as the Koiranion Andro.

The capital of Syros, Ermoupoli, is also rumoured – albeit in contentious fashion (gotta love these historians, right?) – to be the birthplace of Hermes, while other scholars have claimed it to be Arcadia. Regardless, historians agree that the god of wealth, luck and travel must have been of particular importance to the island, considering the capital translates to ‘City of Hermes’. No trip to Syros is complete without a visit to Ano Syros, a hilltop settlement constructed around 1200 CE, for majestic views over the sea. Make sure you bring a water bottle in the hotter months, or a frappe if you prefer, before taking a stroll through the iconic pillars lifting up the Town Hall.

KEEP AN EYE OUT FOR LIFE-SAVING DOLPHINS IN SYROS ON OUR 10-DAY GREECE SAILING ADVENTURE THROUGH THE CYCLADES. DETAILS HERE. 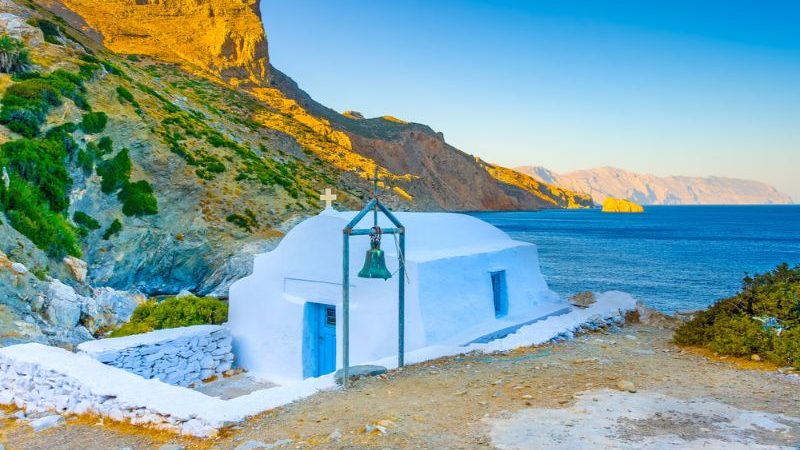 Rugged Amorgos is legendary for three things: yoga pilgrims, hiking enthusiasts, and the ancient story of Ulysses, who left his wife Penelope for the goddess Kirki. Today, the island is just as romantic (presuming you view this myth with a silver lining), and attracts people from all over the world in search of traditional Greek beauty, without the massive crowds found elsewhere. Experience ancient vibes for yourself with visits to Pyrgos of Ancient Arkezini (the ruins are around 2400 years old) and the legendary city of Minoa, located just above the modern port of Katapola. Top it off with a visit to the Archaeological Museum of Amorgos, which displays a heap of artefacts from the ancient city and Minoan civilisation.

Amorgos is stunning, peaceful, romantic, and just the kind of place you can see yourself living in – after all, if it was good enough for Ulysses and a spellbinding Greek goddess, then it’s more than worth a stop-off on your next Aegean adventure!

FOLLOW IN THE FOOTSTEPS OF ULYSSES ON OUR 8-DAY SAIL GREECE SMALL GROUP ADVENTURE. DETAILS HERE. 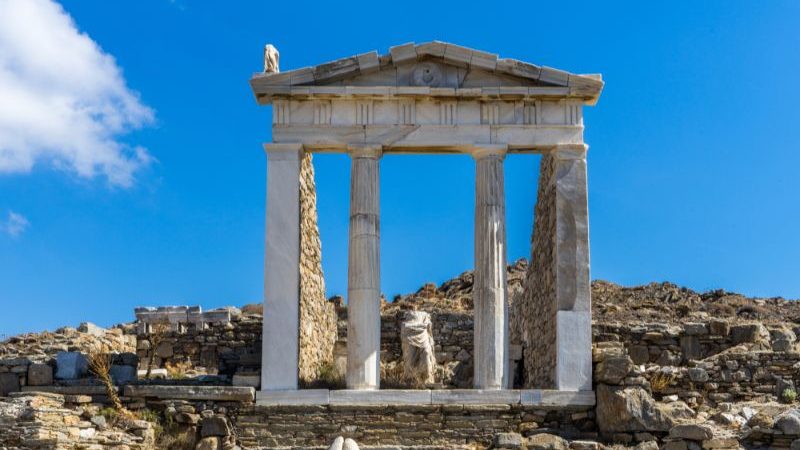 The birthplace of Apollo was always bound to be awesome, right? Although small in size (3 km squared), Delos has historically been regarded as the centre of the Cyclades islands, which includes mega-destinations Santorini, Ios and Mykonos. Excavations have uncovered temples dedicated to Apollo – the son of Zeus and the Titan Leto – one of which contained an eight-metre-high statue of him made from wood and covered completely in gold. The revered god of the Sun, light, music, poetry and the truth, his mythological power can still be experienced today with visits to the Temple of Apollo and the Archaeological Museum of Delos, which contains a large collection of artefacts unearthed around the UNESCO World Heritage Site island. 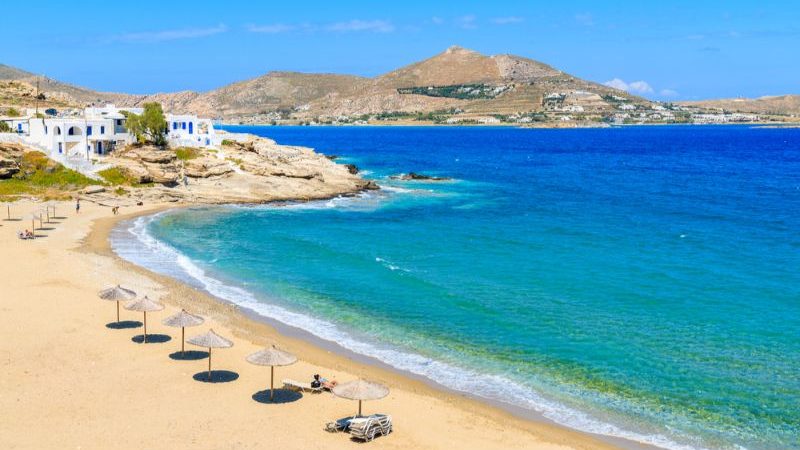 Paros is a treasure trove of archaeological sites, including the much-revered Ancient Marble Quarries – the finest marble in the world being Parian which was used in the crafting of many famous marble statues, including Aphrodite of Milos that now resides in the Louvre (Paris, France)  and Hermes of Praxiteles – the Sanctuary of Asclepius, dedicated to the god of medicine, the Sanctuary of Delion, which houses the remaining pieces of a temple dedicated to Apollo and Artemis, as well as the Archaeological Museum of Paros and the Hellenistic Mosaics. Paros sure packs a punch when it comes to things to do: when you’re up to speed with its many ancient wonders and sites, the blue beaches are the perfect place to chill out with a few cocktails before hitting the local nightlife in Parikia or Naoussa. 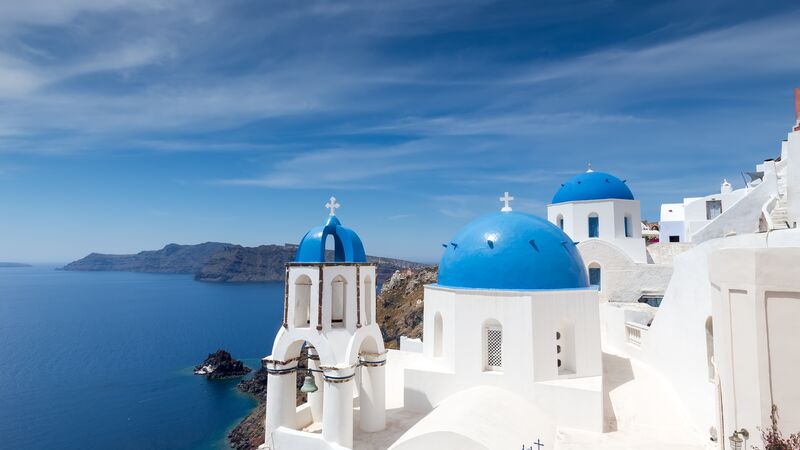 Santorini, for all its fame and foot-traffic, possesses perhaps the greatest mythological backstory of not only Greece, but anywhere on earth. Plato’s The Lost City of Atlantis is rumoured to be modern-day Santorini (more specifically, Thira), while the rest of it sits at the bottom of the ocean due to a massive volcanic eruption that caused earthquakes and floods. This is one of the world’s most talked-about myths, and upon closer analysis of the purported location of Atlantis and the various writings and rumours surrounding it – as well as the fact that a 5000-year-old lost city off the coast of Greece was only recently discovered (here’s looking at you, Pavlopetri!) – it’s certainly feasible that Santorini is the spot the world has been looking for for so long.

Today, you can visit the Akrotiri Archaelogical Excavations in southern Santorini for a glimpse into what life used to be like on this mysterious island, before the volcanic eruption covered the ancient city in ash. And besides that, well… Santorini is simply stunning, especially the barren dirt roads sitting behind Perissa beach.

CAN YOU FIND THE LOST CITY OF ATLANTIS? TRY YOUR LUCK ON ONE OF THESE SMALL GROUP ADVENTURES.

Lose yourself in the magic of the Greek islands, from the super-famous to the lesser-known Aegean gems. Whether it’s ancient history, lost civilisations, Greek mythology, or simply disconnecting from technology for a while, arming yourself with an ice-cold frappé and hiking the beautiful barren mountains to a Mediterranean backdrop, the perfect experience is just around the corner.

Brush up on your Greek myths and legends and explore our full range of small group adventures in the Greek Islands now.

Feature photo by Neirfy via Shutterstock.